Glenn Conroy estimates he’s found more than 200 ounces of gold in 40 years of metal detecting, but these days he is just as likely to give away what he finds as exchange it for cash.

Over the years, the small gold nuggets he discovered helped pay for countless bills as well as braces to straighten his youngest daughter’s teeth when she was a teenager.

“It helped to raise my family,” Mr Conroy said. “It’s helped me to be financially secure, but that’s not why I do it.” 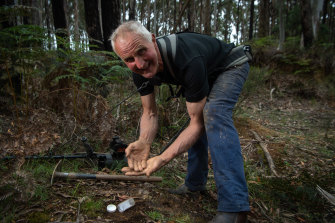 Glenn Conroy with the gold he found in the Wombat State Forest on a trip with The Age in December. Credit:Eddie Jim

Above all, he loves traipsing through the Wombat State Forest, close to his Musk Vale home near Daylesford, exploring the remnants of huts and goldfields that once attracted miners from all over the world.

“I try to get out once a week. I leave the mobile phone in the car. Until I get back, I’m my own man.”

In 1998 Mr Conroy found his biggest nugget, weighing 14 ounces. To put that in perspective, gold was fetching about $2500 an ounce last week, although nuggets go for slightly more.

But his passion searching for hidden treasures has existed since he was a child.

In recent days he has used the YouTube channel to launch the giveaway of a 3.5 gram nugget. 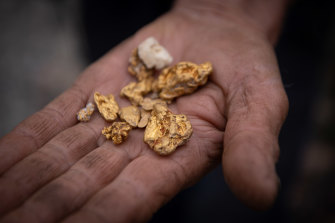 Some of the gold nuggets Mr Conroy has found over the years. Credit:Eddie Jim

“I’m lucky. Why not share the luck a little bit?” he said.

Victoria’s goldfields still hold much that has not been discovered. Recreational fossicking for gold is permitted in state parks with a miner’s right, which costs about $25 for 10 years. Fossickers are limited to using hand tools, including metal detectors and pans. They are not allowed on private property without the permission of the owner.

Mr Conroy often scours quartz reefs that shed gold beneath the soil in the Wombat State Forest as well as long-abandoned shafts and the remnants of miners’ huts that still yield relics, including coins and buckles.

“They’d build huts as close as possible to the richest spot for gold. The huts themselves are a clue to where the gold might be,” he said.

Mr Conroy took up fossicking in the early 1980s just as metal detectors were becoming popular in Australia.

On a cool and humid mid-summer afternoon, he took The Age into the forest to demonstrate his chosen pastime.

As he waved his detector above the earth, it hummed, then surged into a high-pitched robotic squeal.

“Do you hear that signal? It’s either lead or gold,” he said, dropping to his knees and carefully clawing at the earth with his pick. 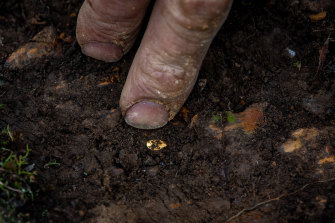 The flake of gold Mr Conroy discovered while with The Age. Credit:Eddie Jim

There, in a clump of moist dirt, lay a flat, teardrop of gold about a quarter the size of a fingernail. There was a rush of exhilaration as the gold revealed itself, beaming in the earth.

“That’s our buzz. That’s why we do it,” he said, pressing the flake into my hand.

Mr Conroy is far from alone in his passion for metal detecting. South Australia-based technology company Minelab reported record sales in the recreational and gold detection markets last financial year, helping to drive a 38 per cent increase in sales to $327 million.

The Victorian Seekers Club was also swamped with membership requests during the pandemic, and had to stop accepting new members, but it will continue to host activities for people interested in gold prospecting and metal detecting.

“People at home with money to spend and time on their hands were looking for something to do,” club president Paul Hart said. 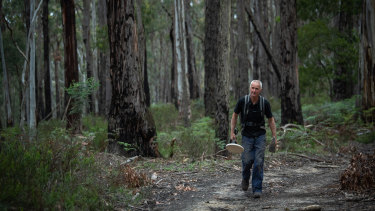 Mr Conroy has found peace and a sense of ease in the bush. Credit:Eddie Jim

“I get immense pleasure from returning lost property to people. They’re so grateful and happy when they get the ring back they thought was gone,” he said.

Metal detecting can be an expensive hobby, with a top-end detector costing as much as $9000.

But Mr Hart said it brings many benefits – getting enthusiasts outdoors and keeping active. “It’s also very much a mental health exercise for people,” he added.

The many hours Mr Conroy has spent in the forest has helped him cope with the grief of losing his wife, Tracey, to breast cancer in 2004 when she was just 42.

They spent much time in the bush together, and he recalls how he often thought of them as a pair of native animals – she the majestic black cockatoo and he the echidna, scratching in the dirt.

“When I go in the bush and I hear the black cockatoos, I think I’m going to have a good day,” he said.

Mr Conroy’s current partner, Josie, also shares his love of exploring the forest, a pastime he intends to continue for some time yet.

“It’s the finding that I like and the chase of it. It brings you into contact with the people before you in the bush,” he said. “I feel at home and at ease in the bush.”

Fascinating answers to perplexing questions delivered to your inbox every week. Sign up to get our new Explainer newsletter here.