A Haitian judge involved in the investigation of the President’s assassination says that Jovenel Moise was shot a dozen times and his office and bedroom were ransacked by the gang that attacked him, according to a Haitian newspaper.

The French-language Le Nouvelliste on Thursday quoted Judge Carl Henry Destin as saying investigators found 5.56mm and 7.62mm cartridges between the gatehouse and inside the house. It said Destin had been to the presidential residence as part of the investigation. 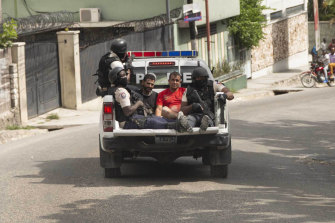 Police arrested two men and drove them away in a ute as a crowd ran after them to the nearby police station.Credit:AP

Moise’s daughter, Jomarlie Jovenel Moise, hid in her brother’s bedroom during the attack, he said, and a maid and another worker were tied up by the attackers who shouted “DEA operation” as they entered the property early on Wednesday, the judge said, citing witnesses.

Moise, 53, was shot dead by what officials said was a commando of trained killers, and his wife Martine was critically wounded. She was flown to Miami for treatment.

Police chief Leon Charles said in a televised news briefing on Thursday that police had captured six of the men who assassinated Moise, had killed seven, and were hunting for the masterminds behind the operation. Mathias Pierre, Haiti’s elections minister, told The Associated Press that one of the suspects in custody was James Solages, a Haitian-American.

“The pursuit of the mercenaries continues,” Charles said, in announcing the arrest of suspects. “Their fate is fixed: They will fall in the fighting or will be arrested.” 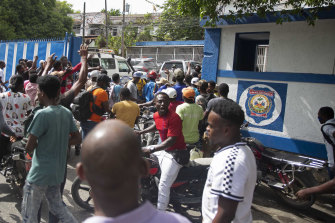 Crowds gather outside a police station in Port-au-Prince and demand police hand over the suspects.Credit:AP

Charles appealed to the population to co-operate with security forces and not to cause unrest, after a crowd formed outside a police station in the capital Port-au-Prince where suspects were being held. They shouted “burn them” and set fire to a vehicle they presumed was that of the assassins.

Witnesses said two of the suspects were discovered hiding in bushes in Port-au-Prince by a crowd, some of whom grabbed the men by their shirts and pants, pushing them and occasionally slapping them.

Police arrived shortly afterward to arrest the men, who were sweating heavily and wearing clothes that seemed to be smeared with mud, an Associated Press journalist at the scene said. Officers placed them in the back of a vehicle and drove away as the crowd ran after them to the nearby police station.

Once there, some in the crowd chanted: “They killed the President! Give them to us. We’re going to burn them!”

One man was overheard saying that it was unacceptable for foreigners to come to Haiti to kill the country’s leader, referring to reports from officials that the perpetrators spoke Spanish or English.

The crowd later set fire to several abandoned cars riddled with bullet holes that they believed belonged to the suspects, who were white men. The cars didn’t have licence plates, and inside one of them was an empty box of bullets and some water.

Prime Minister Claude Joseph assumed leadership of Haiti with the backing of police and the military and on Thursday asked people to reopen businesses and go back to work as he ordered the reopening of the international airport.

On Wednesday, Joseph decreed a two-week state of siege following Moise’s killing, which stunned a nation grappling with some of the Western Hemisphere’s highest poverty, violence and political instability.

Tags: A, Haiti’s, president, Shot, Was