Jurors in the Ghislaine Maxwell trial continue to deliberate for a fourth day on Monday after returning from the holiday break.

The jury of six men and six women ended their first week of deliberations Wednesday without reaching a verdict  forcing the British socialite to spend Christmas – and her 60th birthday – behind bars.

Maxwell, who is facing 80 years in prison if convicted, has been in custody at the Metropolitan Detention Center in Brooklyn, which she’s described as a ‘hell hole’, since her arrest in July 2020.

Jurors began weighing her fate on Monday last week after hearing closing arguments in the three-week trial, and deliberated for two full days before going home for the holidays. 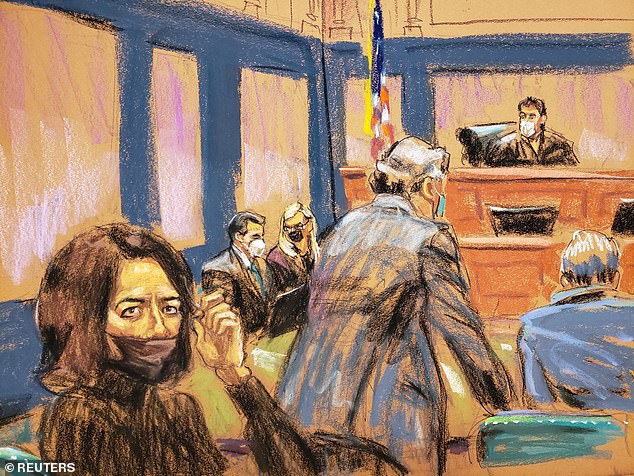 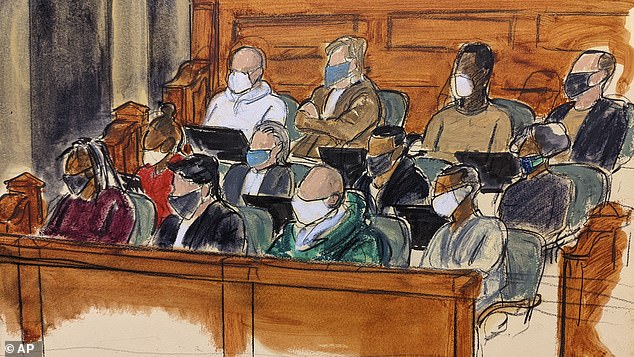 On Wednesday the jury sent one note requesting three transcripts, but failed to come to a decision.

The jury will sit this week through Wednesday and if there no verdict by then it will have to continue its deliberations next week. The court will be closed Thursday and Friday for the New Year holiday.

Maxwell has maintained her innocence and her lawyers have bashed her accusers as having false memory and being motivated by money.

In legal filings earlier this year, Maxwell claimed her treatment in prison is so bad it would be ‘fit for Hannibal Lecter’.

But they are not appropriate for a ’59-year old woman who poses no threat to anyone’, Maxwell’s lawyers claimed. 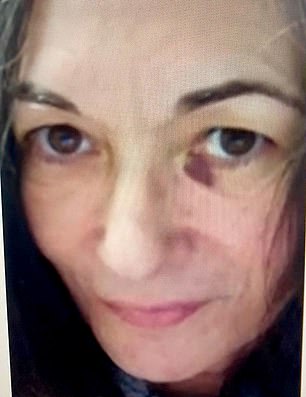 At one point, Maxwell ‘barricaded’ herself in the video conference room in prison with a cart of legal documents, prosecutors claimed and was deemed a ‘security threat’ by blocking the door and preventing guards from accessing the room.

Judge Alison Nathan told the jury to be ‘safe’ over the Christmas break due to the Omicron variant of the coronavirus.

She said she wanted them back ‘healthy’ on Monday when everyone attending the court in New York will have to wear N95 or KN95 masks to enter the building.

Near the end of Wednesday the jury asked for another copy of the transcript of the accuser known as Jane’s testimony.

They also asked for the testimony of Kate, another accuser, and Epstein’s former Palm Beach House manager Juan Alessi.

Given the option to deliberate on Thursday the jury said no because they had ‘made plans’, they said in a note.

Before today’s session, the jury of six men and six women had deliberated for 16 hours and 20 minutes.

On Tuesday – the second day of deliberation – the jurors appeared to be zeroing on two accusers. 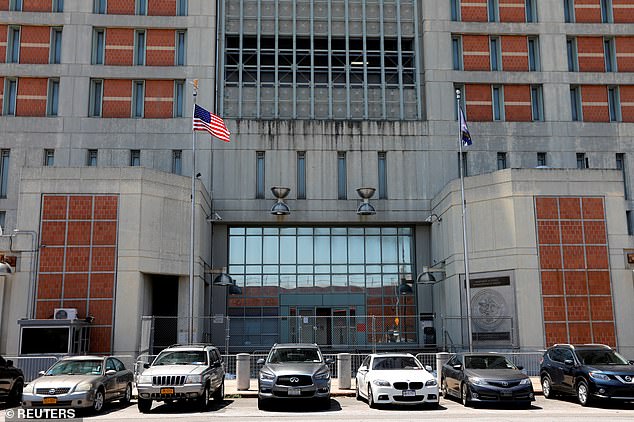 Pictured: The Metropolitan Detention Center (MDC) where Ghislaine Maxwell is being held

They deliberated for the whole day Tuesday and sent four notes to the judge including one which related to Annie Farmer, the only accuser publicly identified in court.

They wanted to know if they could use her testimony for two counts of conspiracy to entice and transport an underage girl to engage in sex acts.

Judge Nathan said she would tell them that they could.

Earlier the jury asked to see notes of an FBI interview that Carolyn gave in 2007, the first time she spoke to law enforcement about being abused by Epstein.

Judge Nathan said that it had not been entered in evidence so they could not see it.

However the jury could refer to its mention in Carolyn’s cross examination by the defense. 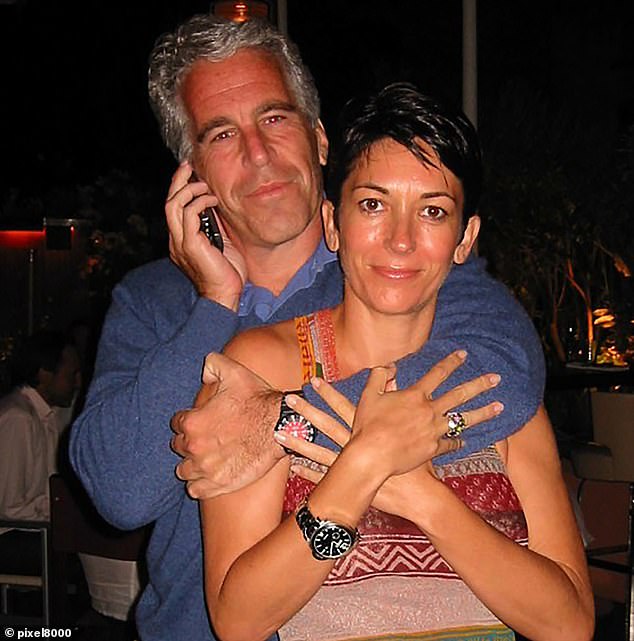 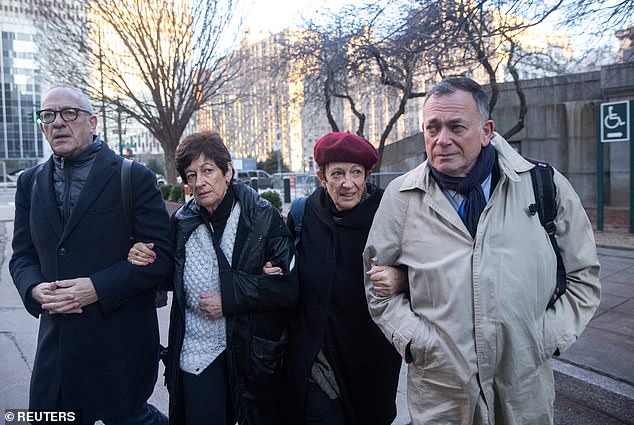 At 10.10am after just over an hour of deliberating on Tuesday the jury sent its first note.

Judge Nathan said the jury were asking for the transcripts of testimony from Jane, Annie and Carolyn – but did not mention Kate.

The charges against Ghislaine Maxwell

Count One: Conspiracy to entice a minor to travel to engage in illegal sex acts

Count Two: Enticing a minor to travel to engage in illegal sex acts

Count Three: Conspiracy to transport a minor with the intent to engage in criminal sexual activity,

Count Four: transporting a minor with the intent to engage in criminal sexual activity.

Kate is the only accuser whose claims should not be considered crimes as charged in the indictment.

The jury were not brought out and Judge Nathan said she would give them the transcripts in the deliberation room.

She hugged her lawyers and waved at a young woman in the public gallery.

Maxwell’s defense delivered closing arguments Monday afternoon, telling the jury that she is ‘an innocent woman wrongfully accused of crimes she did not commit.’

In her closing remarks, Maxwell’s lawyer Laura Menninger said: ‘The government has failed to prove any charge beyond a reasonable doubt and the only correct verdict in this case is not guilty on each count.’

The defense again attempted to discredit the accounts of the four accusers, as Menninger stated, ‘The evidence has established what we told you it would, that the stories relied on by the government are erroneous memories, manipulation and money. But in this case the order is reversed. The money brought the accusers to the FBI where their personal injury lawyers sat right there.’

As for how Maxwell was portrayed, Menninger said that she had been made to look like ‘Cruella de Vil and the Devil Wears Prada all wrapped up into one’.

Such a portrait was ‘as old as Hollywood’, Menninger said.

Menninger said that the prosecution spent a lot of time talking about Epstein’s lifestyle, about his wealth and his property and his private planes ‘just like a sensationalist tabloid would’. 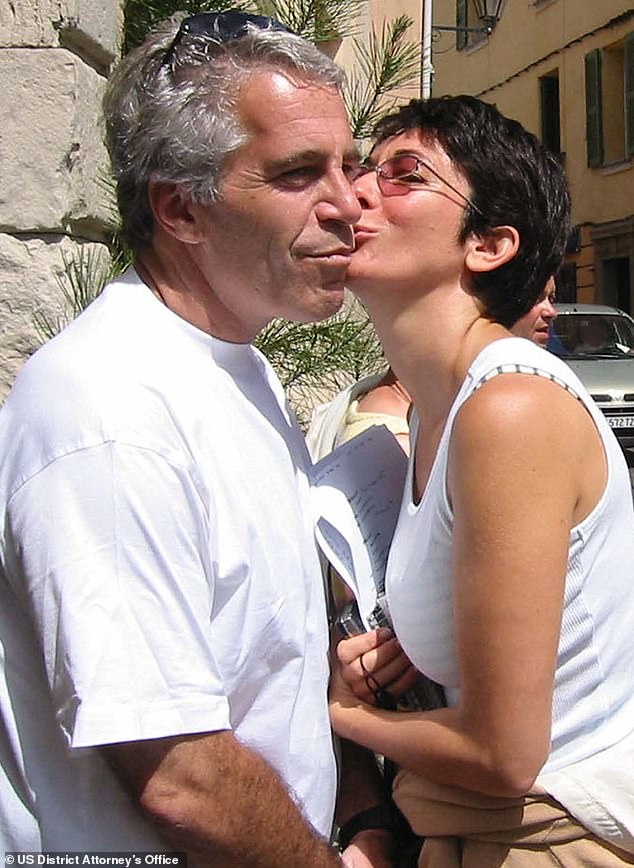 The couple appear in one photo in what appears to be a European city. Ghislaine is seen kissing Jeffrey Epstein on the cheek 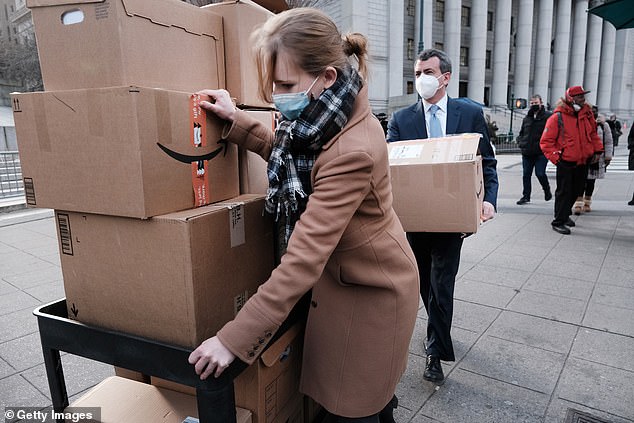 Menninger said that Epstein was a ‘master manipulator’ who ‘abused his money and his power’.

Menninger claimed that when Epstein died the prosecution ‘pivoted’ to going after Maxwell.

The idea was that ‘Ghislaine was there, she must have known.’

Menninger criticized prosecutors for showing the jury dozens of photos out of 38,000 seized from Epstein’s New York home in 2019.

She said: Where are the other 31,960 photos? Who was in those photos? Was it other girlfriends? Other women?

Nor should the jury draw any inference from Epstein keeping photos of Maxwell. Menninger asked the jury that if an ex boyfriend or girlfriend had photos of them, would that make them a ‘sex offender’?

Menninger condemned the use of such images as ‘straight up sensationalism.’