The 18-year Conservative era in British politics came crashing down yesterday, with the Labour Party, led by Mr Tony Blair, securing one of the biggest electoral victories in the nation’s history. 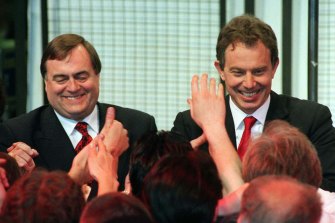 Tony Blair and his deputy leader, John Prescott, are greeted by supporters at a victory rally outside the Royal Festival Hall in London.Credit:AP

Mr Blair’s new Labour Party attracted a 10 per cent swing to wipe out the Conservatives’ political stranglehold on middle England that began under Margaret Thatcher. In a symbolic display of the change, Baroness Thatcher’s middle-class former seat of Finchley fell to Labour with a 15 per cent swing.

The defeat of the Major Government, which lost more than 170 seats, sent waves of despair and desperation through the Conservative Party. Mr Major announced he would step down as party leader and said he hoped a successor could be found quickly. Senior party members had urged him to stay for several months in an attempt to dampen tension between leadership contenders.

But the process of succession was thrown into disarray when the most likely candidate to replace Mr Major, the Defence Minister, Mr Michael Portillo, lost his safe seat after his vote collapsed by 17 per cent. He was one of six Cabinet members to lose their seats.

The first Tory MP to nominate for the party leadership was the Chancellor of the Exchequer in the Major Government, Mr Kenneth Clark.

Labour’s victory was the biggest electoral rout in Britain since a landslide win by the Liberals in 1906, and the Conservatives’ vote of 31.4 per cent was its lowest since 1832 when it was led by the Duke of Wellington. Labour’s majority is expected to be 180, considerably more than Baroness Thatcher ever secured. Her biggest majority, 144, came in 1983.

The Conservative Party has now been reduced to an exclusively England-based party. It lost all 11 of its seats in Scotland, and all eight in Wales. The Labour victory means that the Scottish and Welsh people will have a referendum on establishing a form of limited self-government under Mr Blair’s policy of devolution within Britain.

Labour also cut a swathe through London. Of the 74 seats in the capital, the Conservatives were left with only 11.

This afternoon Mr Blair saw the Queen to accept his commission to form a government. He then headed to 10 Downing Street to appoint his Cabinet.

Mr Blair and his wife, Cherie Booth, broke with tradition and abandoned their car in Whitehall to walk to Number 10 from the end of Downing Street, greeting supporters as they went.

Within hours the new PM named the first members of his Cabinet: Mr John Prescott as his deputy with responsibilities for transport and the environment; Mr Gordon Brown as Chancellor of the Exchequer; Mr Robin Cook as Foreign Secretary; Ms Margaret Beckett as president of the Board of Trade; Mr David Blunkett as Education Secretary; Mr Jack Straw as Home Secretary; and Mr Deny Irvine as Lord Chancellor.

In his first speech as Prime Minister, Mr Blair said he would lead “a government of practical measures in pursuit of noble causes… Our ambition for ourselves is matched by our sense of compassion and decency, and duty towards other people. For 18 years, 18 long years, my party has been in opposition. It could only say, it could not do. Today we are charged with the deep responsibility of government. Today, enough of talking. It is time, now, to do.”

Earlier In the day, Mr Blair, 43, the youngest prime minister for almost 200 years, told cheering party workers: “A new dawn has broken, has it not? And it is wonderful. We always said that if we had the courage to change then we could do it. And we did it.” Still with the theme of caution that characterised his campaign, he said: “The British people have put their trust in us it is a moving and it is a humbling experience and the size of our majority now imposes a special sort of responsibility on us.”

Across town, Mr Major told a hushed gathering at Conservative central office “Tonight we have suffered a very bad defeat. Let us not pretend to ourselves it was anything other than what it was. Unless we accept it for what it was and look at it we will be less able to put it right.”

The Conservative Party chairman, Dr Brian Mawhinney, said he believed the Government could not have done anything else in the campaign.