WITH the introduction of poker machines in Victoria just months away, Melbourne-based AFL clubs are queuing up to be the first to get them. 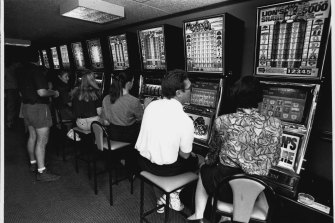 Many are spending hundreds of thousands of dollars on rebuilding programs to house the new machines, several are considering special “gaming” memberships for supporters, and at least one is looking to buy a hotel to house the machines.

Some are optimistically predicting revenue from the machines could be up to $300,000 a year, enough perhaps to save some of the more financially strapped clubs.

Hawthorn, which will apply for only 60 machines because that’s all its social club rooms can handle, believes their machines could return $30,000 a day.

“To us it’s almost mind-boggling,” said the club’s chief executive, Mr John Lauritz. “That’s more than we would take on grand-final day at our social club and there are a lot of people here on grand final day.”

While AFL clubs dream of windfalls that may or may not be, the TAB and Tattersalls, which will supply and run the 10,000 machines, are locked in battle to secure the most lucrative venues. The TAB believes it has won its first gambling coup by reportedly sewing up deals with every AFL club but Essendon.

Mr Neil Walker, chief general manager of the TAB, told ‘The Sunday Age’ that TAB policy was not to require “exclusivity”, but AFL clubs said they had been told they had to choose “one or the other”. Most clubs want 105 machines, the maximum they can get.

A special AFL sub-committee, which includes AFL Commission chairman, Mr Ross Oakley, recommended that clubs accept TAB machines, but clubs claim they made their own decision. Essendon has reportedly opted for Tattersalls in the belief it had more chance of getting its full quota.

Tattersalls’ general manager, Mr Peter Gillooly, denied that the TAB had AFL clubs sewn up. “That’s not what I hear,” he said. “There are a lot of furphies going around at the moment. We are not concerned…”

Many AFL clubs plan to upgrade social clubrooms, while Fitzroy, which has no social club venue, plans to buy a hotel specifically to house the gambling machines.

Melbourne, which also has no social club venue, is also believed to be looking at buying a hotel.

In one of the most ambitious ventures, Footscray Football Club and Footscray City Council have joined forces in a $4.7 million rebuilding project, already under way at the Bulldog’s social club headquarters at the Western Oval.

Footscray’s business manager, Mr Dennis Galimberti, said the joint club-council building project, based on a community facility, would be completed by next March, “to coincide perfectly with the release of the machines”.

Mr Galimberti said the TAB and Tattersalls had described the western suburbs as “a gambling belt” and both had told the club that it was “a number one priority venue”.

Other clubs with plans well advanced are the Geelong Football Club, which intends spending $500,000 on refurbishing the social club at Kardinia Park; Essendon, which is joining forces with the Essendon Club in a $500,000 upgrade at Windy Hill; and St Kilda, which will spend a similar amount at Moorabbin.

Richmond will join forces with the Richmond Cricket Club social club but has no plans for “horrendous capital works”, according to the general manager, Mr Cameron Schwab.

Collingwood wants the maximum 105 machines and will spend $3 million over three years on its social clubrooms which it is negotiating to buy from Collingwood City Council.