Baria (South Vietnam) August 19 – Seventeen Australians were killed and 26 wounded yesterday in a savage four-hour battle with the Viet Cong. 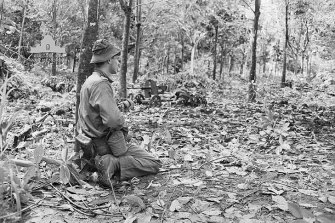 At least 193 Viet Cong were killed in the battle.

A company of the Sixth Battalion fought off hundreds of Viet Cong almost surrounding it for more than three hours.

The company had only a handful of ammunition left when reinforcements arrived.

The commander of the Australian Taskforce (Brigadier O. D. Jackson) said the fighting by the Australians was an “epic of courage that will go down in Australian history.”

It was the biggest battle for Australian troops since the Korean war and one in which they distinguished themselves with dedication and unflinching courage, Brigadier Jackson said.

In Canberra the Prime Minister (Mr Holt) said: “Australia is saddened by the loss of these splendid men. My sympathy goes to those who have been bereaved and to the wounded in their suffering.”

As ammunition ran low two RAAF Iroquois helicopters flew into the battle zone, under the cover of torrential rain to deliver ammunition.

The fighting started about 4.15 pm in a tropical rainstorm when Delta company patrolling rubber plantations east of the taskforce’s area ran into a Viet Cong force estimated at between one and two battalions.

The company was moving forward in wedge-shaped formation with the two leading platoons 300 yards apart.

The platoon on the right suddenly ran into Viet Cong of company size dug into a small feature.

The Viet Cong allowed the Australians to within 150 yards before opening fire with heavy machine guns and mortars.

The second platoon on the left moved to help but was quickly pinned down by a second large force.

Up to 1000 Viet Cong then snapped shut the doors of the trap, pouring in concentrated fire from mortars, recoilless rifles, automatic rifles and grenade launchers.

Operating in strength on an extended front of 1000 yards, the Viet Cong moved to wipe out the Australian company.

Fighting continued for almost an hour and half at close range as the surrounded company fought off attack after attack.

Allied artillery fire continued to pour in, but the Viet Cong kept as close as possible to the Digger’s position to try to discourage them from calling fire on themselves.

For more than three hours, the Australians held out, with rubber trees their only shelter.

The Viet Cong repeatedly charged the Australians but were flung back, suffering heavy casualties.

In many cases the Viet Cong had to leap over piles of their dead as they charged the Australian positions.

Waves of United States Air Force F100 Super Sabres F4 Phantoms were called in to deliver loads of 500 and 1000 lb. bombs as well as napalm on the area.

Air strikes continued in a curtailed form during the heavy rainstorm, the pilots were bombing by radar.

The Viet Cong were climbing rubber trees to get a better shot at the Australians, but the company held out. Heavy Allied artillery fire poured into the area causing numerous Viet Cong casualties.

An artillery forward observation officer at one stage reported seeing a company of Viet Cong moving in attack formation towards his position.

Artillery was called in to force back the guerillas.

As the company’s ammunition began to run dangerously low, two RAAF helicopters flew right into the battle zone under cover of the heavy rain to deliver ammunition.

The only avenue of escape left to the company was to the southwest, but the Viet Cong were quickly moving to close off the narrow gap and move in for the kill.

As a large Viet Cong force moved in to close off the escape, heavy Australian reinforcements arrived in armored personnel carriers coming up from behind in heavy rain.

At close range the carriers opened up with the 50-calibre heavy machine guns, smashing into the Viet Cong.

The Viet Cong fought back with grenades and small arms fire but were overwhelmed.

The lighting continued until about 8 pm when under cover of darkness and the rain the Viet Cong broke off contact with the quickly expanding Australian force being poured into the area.

Tribute to courage of Diggers

The Minister for Defence (Mr Fairhall) said last night that the Australians who took part in the South Vietnam action gave an outstanding demonstration of courage and skill.

Mr Fairhall, who released the casualty figures in Canberra, said the Australian task force inflicted a sharp reversal on the Viet Cong.

Of those killed, 35 lost their lives before the taskforce replaced the First Australian Battalion in April this year.

In his statement, Mr Fairhall said: “This clash was not unexpected, following the introduction of the Australian force into the Phuoc Tuy province, which had been under Viet Cong domination for a long period.

“As the taskforce extended its operation and forced increasing disruption on the Viet Cong, it was to be expected that increased resistance would be encountered.”