People attending churches or other places of worship from tomorrow will have to wear a face mask – but will bizarrely be allowed to take it off to sing, it has emerged.

But it means that families attending Christmas services over the next few weeks will be able to remove their face coverings while singing festive carols.

The new coronavirus rules also mean shoppers would technically be allowed to remove their face coverings in supermarkets if they walked around the store singing.

Under Plan B, which was enacted by the Prime Minister last night, face coverings will become compulsory in most public indoor venues from tomorrow. 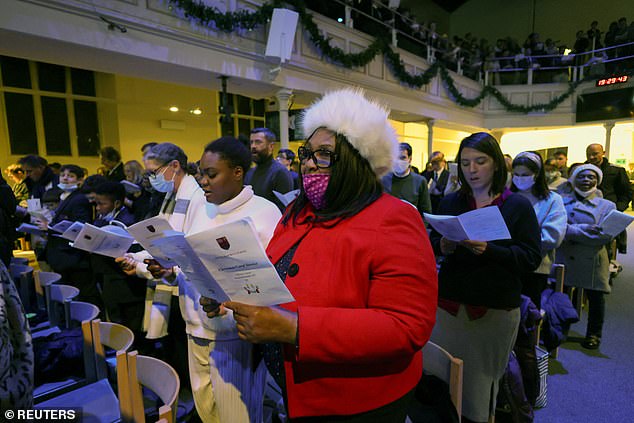 These venues include cinemas, theatres and places of worship, but not gyms, bars or restaurants. Masks are already required on public transport and in shops.

Boris Johnson said during his Downing Street press conference last night that there would an exemption for singing, and more details have now emerged about this.

Where will you have to wear a face mask?

Where will you have to wear face masks from tomorrow?

From tomorrow the public, and staff in public facing areas, will be required to wear face coverings in these settings:

Where do you already have to wear face masks?

The public, and staff in public facing areas, have also been required to wear face coverings in these settings since November 30:

The rule was mainly seen as being applicable to places of worship where a mask should be worn during the service but could be removed to sing hymns.

Official Government guidance states: ‘The legal requirement to wear face masks in certain public indoor venues will be extended to our places of worship and some other public spaces.

‘However, there are exemptions for those leading a service or giving a reading, and there is a reasonable excuse exemption which allows people to remove a face whilst singing if they wish to do so.’

The policy caused confusion on Twitter today, with one critic, David Oliver, saying: ‘Apparently ‘singing’ will be a valid reason to remove a face covering! Go to church and wear a mask during the prayers but belt out a carol with your mask off! Utterly bonkers, with zero scientific basis.’

Hannah Doit added: ‘Surely when singing you create more droplets and aerosol which travel further than just breathing? Singing is surely the most risky time to remove a face mask? I don’t follow the logic on this…? Or is there more nuance here than can be included in a tweet?’

And Kay Morgan-Gurr tweeted: ‘When I heard masks in places of worship were to come back I was pleased – I thought I would manage at least one Christmas service. But NO, we are allowed to take them off to sing… That’s me back in my box then.’

The Government confirmed last month that several outbreaks of Covid-19 around the world have been associated with adult choir rehearsals and performances and in church congregations.

Officials also pointed out that ‘singing by adults produces both large droplets of respiratory secretions that generally fall onto surfaces within two metres of the singer, and small droplets that are carried on the air for some distance (aerosols).’

They added that ‘shouting or singing loudly can produce 20 times the mass of aerosol than speaking at a normal level of loudness’.

But officials confirmed today that the mask exemption for singing would also be applicable to other indoor settings.

Asked whether a shopper could therefore remove their mask in Tesco if they were singing, it was confirmed that would be within the rules, as would removing the mask to sing in a theatre.

But officials stressed there needed to be a ‘reasonable excuse’ so singing in the supermarket would be pushing the limits of the law.

The Prime Minister’s official spokesman said: ‘I would urge, as the public has been throughout, to be responsible and sensible, and that is what we have seen.’

He said: ‘It’s about striking the right balance. We recognise that whenever you’re deciding which measures or restrictions to introduce, you do need to draw appropriate balance.’

He added that it was ‘practical and sensible’ to put the measures in place.

Downing Street later said it would be ‘hard to justify’ shoppers having a ‘reasonable excuse’ to remove their masks to sing in supermarkets under new Plan B rules.

The Prime Minister’s official spokesman said: ‘We were absolutely clear there is a reasonable excuse required for someone who is seeking to do that.

‘Whilst it wouldn’t be for me to say, I think it would be hard to justify. These rules are set to be balanced and proportionate, we’ve seen how the public are responsible … and we’re confident they will continue to be so. 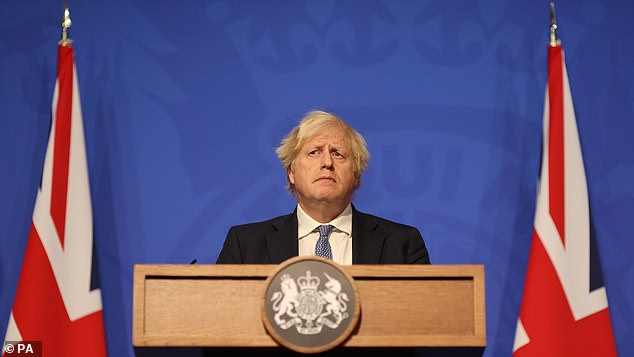 ‘It might be for the police to decide what is appropriate, as has been the case throughout the pandemic.’

The exemption is another example of how the new measures appear to have some idiosyncrasies.

What are the new Covid rules in England?

Face masks will be made compulsory in most public indoor venues including in cinemas and theatres from this Friday. They will not be required in pubs, restaurants and gyms.

The NHS Covid pass will be compulsory to gain access to nightclubs and other large venues where large crowds gather.

Two vaccine doses will be treated as fully-vaccinated but this will be kept under review because of the booster programme.

A negative lateral flow test will also be sufficient.

This requirement will be rolled out in one week’s time to give businesses time to prepare.

Contacts of Omicron cases will be told to take daily coronavirus tests instead of having to self-isolate. They will have to quarantine if they test positive.

Masks do not need to be worn in hospitality settings, even if the person is not eating or drinking.

And under Plan B people are being told to work from home if they can from next week, but Mr Johnson said it was still possible for Christmas parties to go ahead.

And the guidance would not stop colleagues gathering at a pub to do their jobs.

Officials confirmed there was nothing within the rules to stop colleagues meeting at a pub to work, with the focus being on reducing the transmission risk from the commute and within the workplace.

It would be up to employers and employees to decide how to interpret the new guidance.

But the advice is that if a worker does not need to go into the office, they should work from home, in order to slow the spread of the Omicron variant.

The Prime Minister’s official spokesman said: ‘Obviously, we have, sadly, been in this position before and employers and employee, by and large, have demonstrated that they’re able to work together and come up with an agreement recognising both business need and also the needs of individuals and personal life circumstances.’

It is also understood that church events in people’s private homes do not require masks because they are not classified as ‘public indoor venues’, while masks would also not be needed for outdoor carol services.

The Government has also confirmed that vaccination passports – which will be introduced from next Wednesday for nightclubs and events where large crowds gather – will not apply to places of worship.

From November 30, face masks were made compulsory on public transport and in shops, banks and hairdressers in England – but not in pubs and restaurants.

That date marked the first time that face mask restrictions had been brought in for those settings under law since the lockdown officially ended on July 19.

Between those two dates, face masks were mandatory on the Transport for London network but only under the conditions of carriage and not under law.

This meant that until that point it was not illegal to travel on a Tube without a mask – but you could have be asked to leave if you were not wearing one.

Officials said masks were not extended to hospitality on November 30 for practical reasons, because you cannot eat or drink while wearing a mask.