Firefighters in La Palma tried desperately to divert lava away from homes overnight as a volcano on the island continued to erupt, amid warnings the final bill will be in the hundreds of millions of pounds.

Fire crews from Gran Canaria, who have been drafted in to help with the unfolding crisis, filmed themselves using diggers to try and hem in the lava overnight – directing it away from homes and into uninhabited areas.

‘We do not know if it will work,’ the firefighters wrote in a Facebook post. ‘But we have to try.’

Meanwhile Angel Víctor Torres, the president of La Palma island, warned the final bill for damages is likely to exceed £340million with roads, homes and at least one school needing to be rebuilt.

Some 200 houses have already been burned up by the lava, with up to 1,000 at risk of being destroyed as the molten rock inches its way ever-closer to the sea.

Scientists initially calculated the flow would reach the ocean some time on Tuesday, but EU satellite data taken at 10pm showed it was still a mile and a half away having slowed considerably since the eruption began on Sunday. 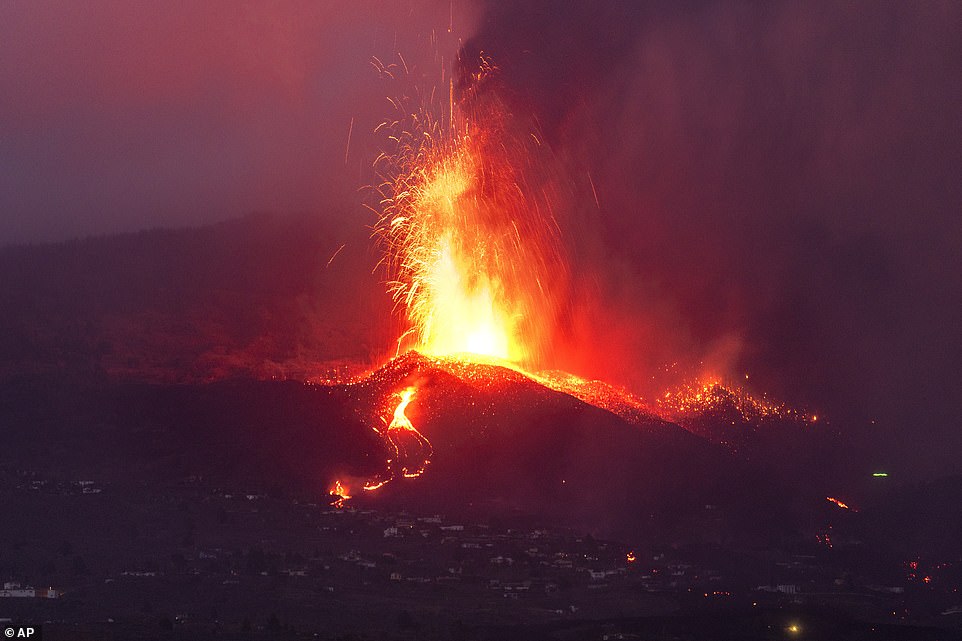 A volcano on Spain’s La Palma island continued to erupt overnight, spewing lava over a vast area. 200 homes have so-far been swallowed by the molten rock, amid warnings that 1,000 are at risk 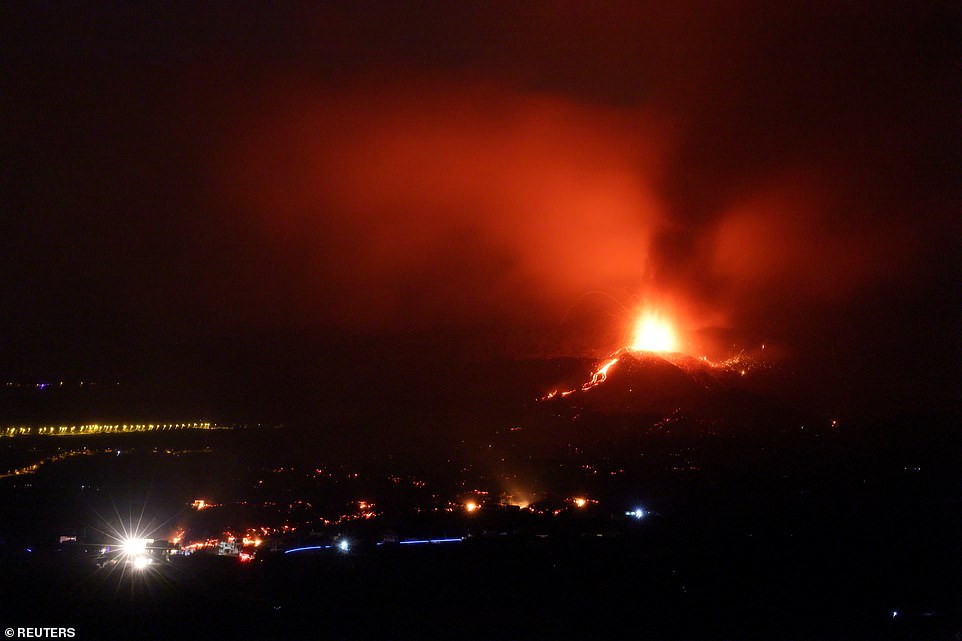 Millions of gallons of lava are inching their way towards the island’s west coast, burning their way through homes and hundreds of acres of valuable farmland in the process 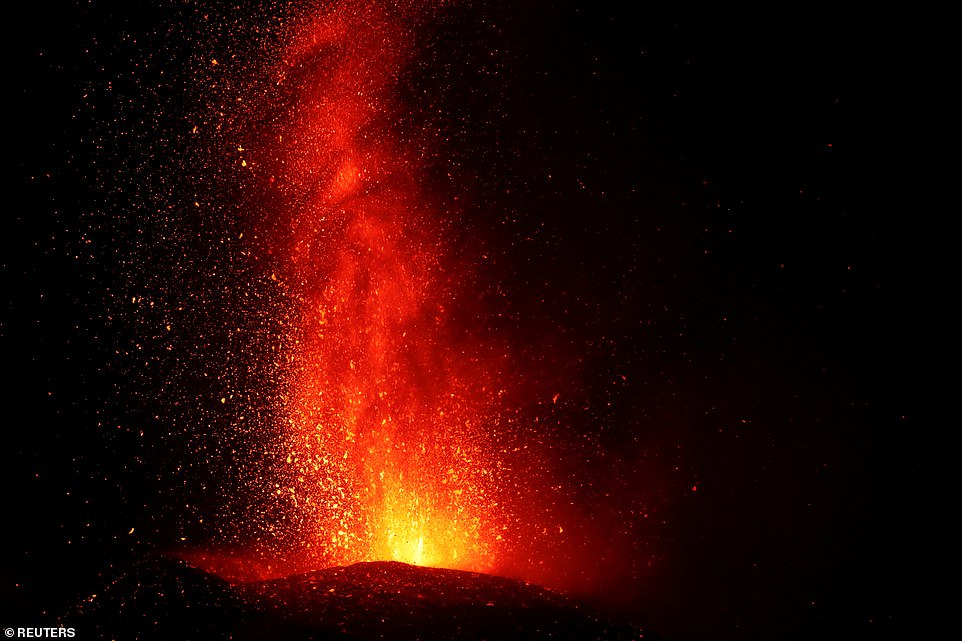 Experts have warned that the eruption – which is the first to take place on the island in 50 years – is likely to last for weeks and possibly months, causing widespread damage 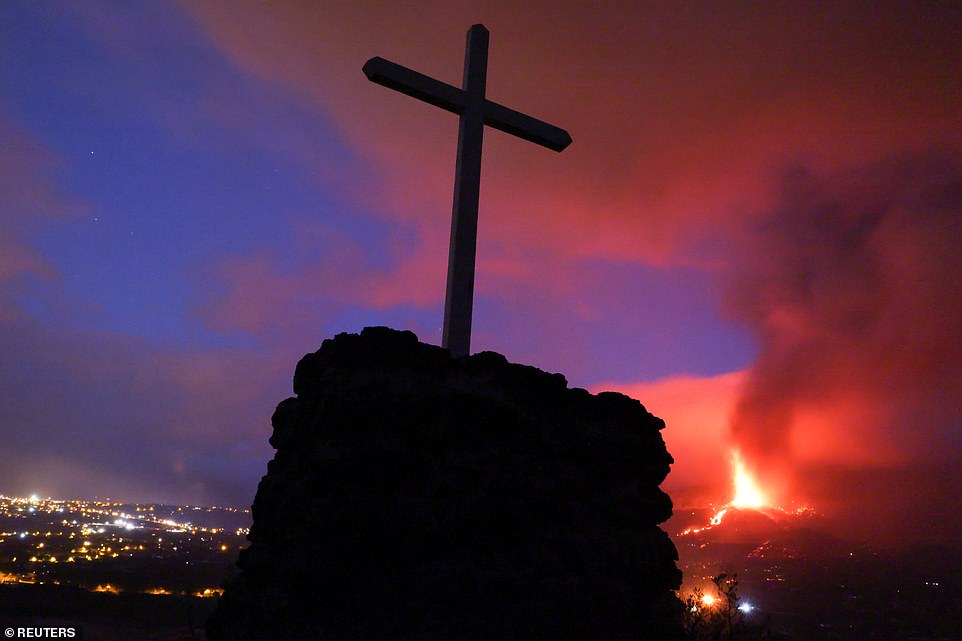 La Palma’s president has warned that the total bill for damages is likely to exceed £340million, though it could be weeks before the actual total becomes clear 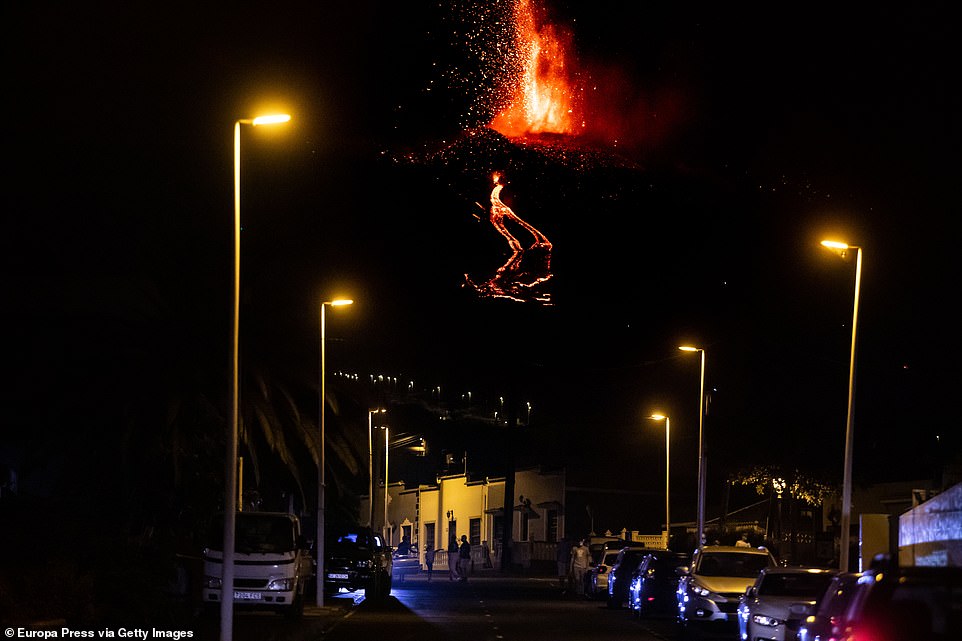 The eruption is taking place in at Cumbre Vieja, an area that is notorious for volcanic activity – though the exact site where the lava is spewing from has never erupted before

Experts said the slow-down is because the lava is spreading over a much wider area than initially anticipated, piling up to 20ft high which means it has over-flowed natural channels that would have directed it to the sea.

It has also split into two streams, with the main one now ploughing through the town of Todoque at some 400ft per hour. The second has branched off towards the Las Manchas region, but is moving at just 6ft an hour with observers saying it will likely come to a halt soon and may not restart.

Fire crews are now carving out artificial channels in the hopes of easing the lava towards the ocean, hoping it will spare some houses that would otherwise be consumed.

But the stream is also threatening vast areas of farmland that crews can do little to save, with La Vanguardia reporting that some 1,000 acres could be destroyed by the time the eruption finishes – which volcanologists say may not happen for several weeks, if not months.

The region that has been hit by the eruption is sparsely populated, but is covered with crop-land including some of La Palma’s largest banana plantations.

Bananas are the island’s largest export with a fifth of the total supply now under direct threat. Even trees that are not burned up are likely to become unproductive because they cannot be watered or accessed to harvest.

Domingo Martín, head of the La Palma banana grower’s association, described the situation as ‘a tragedy’ – while the head of the local chamber of commerce said it will spark an ‘economic debacle’.

Sunday’s eruption took place on a ridge known as Cumbre Vieja, which is notorious as an area of high volcanic activity and has played host to every eruption on the island since the 1600s.

It began around 3pm when a cluster of earthquakes split the ground in an area known as Cabeza de Vaca on the western slope of the volcanic ridge as it descends to the coast, with three fissures spewing out lava.

Some 6,000 of the island’s 80,000 inhabitants have so-far been evacuated from their homes, with 35,000 under emergency warning orders.

Fortunately, earthquake activity in the days leading up to the initial eruption meant scientists and officials were well-prepared with evacuations taking place quickly and meaning that no casualties have been reported so-far.

Nemesio Perez, Director of the Volcanology Institute of the Canaries (INVOLCAN) said just over a week ago as he assured locals and holidaymakers in the area they could go about their everyday lives: ‘In 80 per cent of cases, these processes remain underground and do not result in a volcanic eruption.’

‘We’re moving from a situation of normality to one of alert.

‘We’re recognising a change in seismic activity and recommending to the population that they pay attention to information issued by the authorities.’

Mr Perez also explained the three factors that had played a part in the decision to go from green to yellow, saying they included the increased number of tremors and the fact they were occurring nearer the earth’s surface at an average of around seven miles underground instead of 12.

In a social media post INVOLCAN said early last week following a swarm of small earthquakes: ‘In the past few years the Cumbre Vieja volcano has seen 10 earthquake swarms, including the one that began on Saturday September 11.

‘There is no doubt the current swarm represents a significant change in activity.’

Seismic activity in the south of the island of La Palma has been ‘anomalous’ since 2017, with eight earthquake swarms recorded since the summer of 2020.

La Palma is one of the westernmost and youngest islands of the Canary archipelago along with El Hierro. 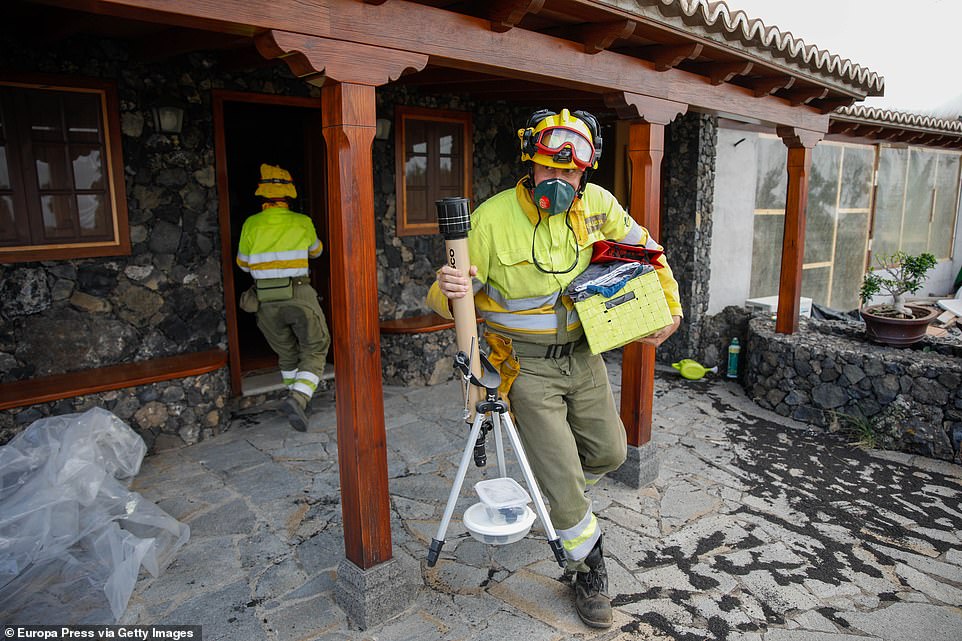 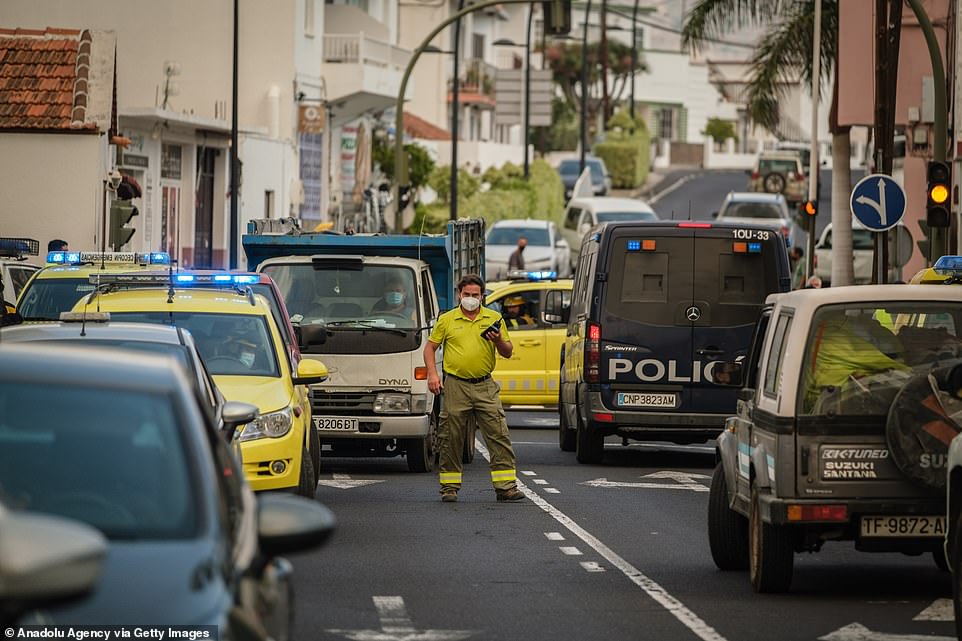 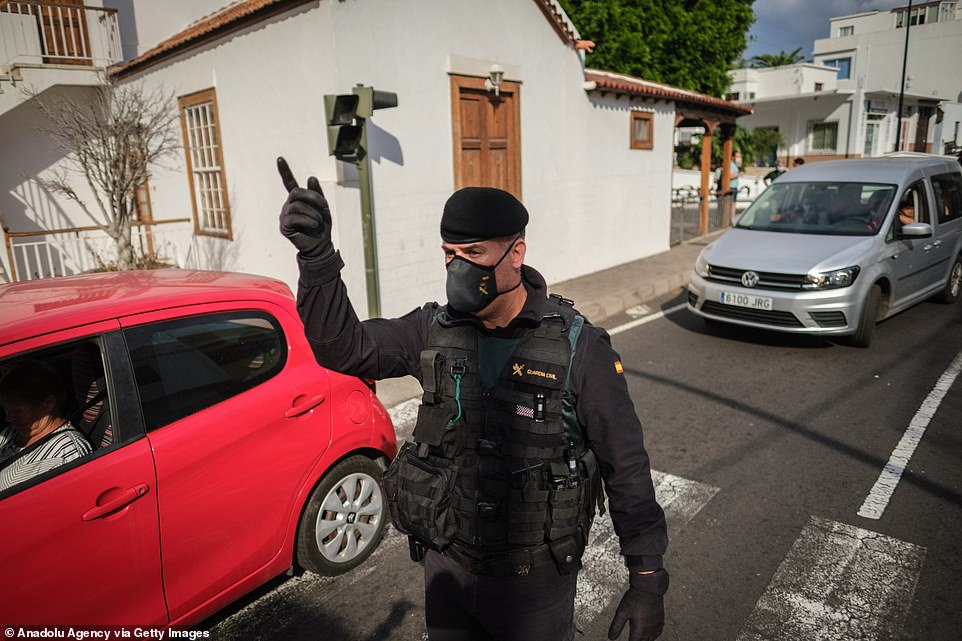 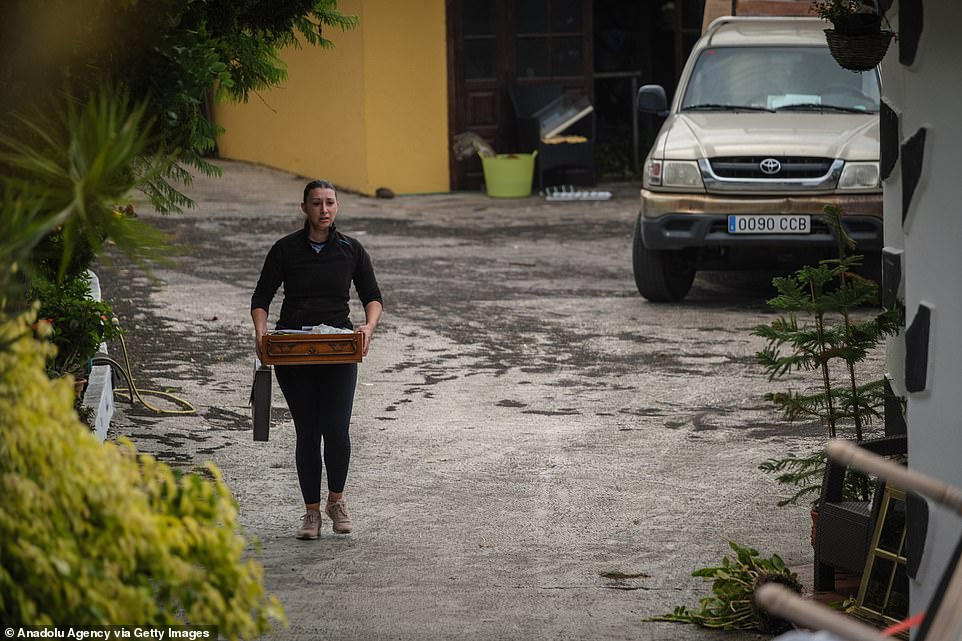 A woman carries a drawer during an evacuation process as Mount Cumbre Vieja continues to erupt in El Paso, spewing out columns of smoke, ash and lava 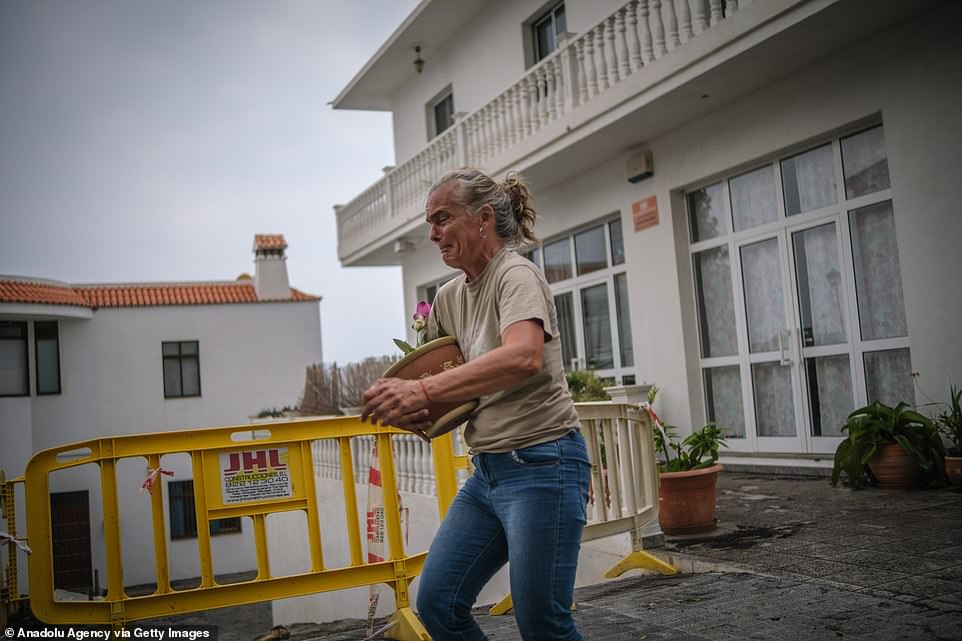 The island, the first largest of the Canary Islands, is regarded as one of the highest potential risks in the volcanic archipelago and therefore in-depth studies to define its state of unrest are seen as vital.

La Palma is said to be at potential risk of undergoing a large landslide which could cause a tsunami in the Atlantic Ocean.

A 2001 research article claimed a change in the eruptive activity of Cumbre Vieja volcano and a fracture on the volcano that formed during the 1949 eruption may be the prelude to a giant collapse.

Authors Steven N Ward and Simon Day estimated such a collapse could cause tsunamis across the entire North Atlantic and severely impact countries as far away as North America.

Later research has debated whether the tsunami would still have a significant size far away from La Palma and whether the collapse is likely to take place in a single failure, with evidence indicating most collapses in the Canary Islands took place as multistage events that are not as effective at creating tsunamis.

The volcano that erupted on Sunday rises around 1.2 miles above sea level and 3.7 miles above the seafloor.

It is described as the fastest growing volcano in the archipelago and therefore dangerous in terms of collapses and landslides.

Puerto Naos, one of the coastal towns the lava is said to be heading towards where around 500 tourists have been evacuated, is surrounded by banana plantations and is described as the ‘ideal destination for visitors in search of peace and tranquility.’

As well as the main beach at Puerto Naos, there are other nearby coves that can also be explored before refuelling and recharging with the tasty local squid freshly prepared in the area.

The waters off of the coastline are also popular with diving enthusiasts.