Victorian authorities are turning their attention to a fast-growing coronavirus outbreak in Melbourne’s south-east, opening pop-up vaccination clinics as the rate of infection causes concern among health officials.

While the latest coronavirus outbreak has been predominantly concentrated in Melbourne’s northern and western suburbs to date, COVID-19 commander Jeroen Weimar said he was worried about the increasing number of people infected with the virus in south-eastern suburbs such as Pakenham, Keysborough and Frankston.

Melbourne’s outbreak has been given a boost outside the previous hot spots following widespread coronavirus transmission across the state, including via illegal AFL grand final gatherings. The highest caseload remains in the north and west. Of the 1220 cases reported on Sunday, 497 were in the city’s north, 361 in the west, 236 in the south-east, 73 in the east, and 52 across regional Victoria.

However, experts say rising case numbers in the south-eastern suburbs were set against a backdrop of relatively healthy vaccination rates, unlike what played out in the north and west when cases began to skyrocket in those communities. 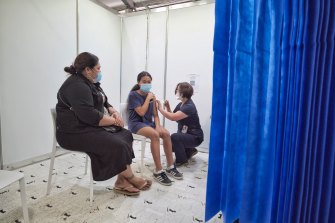 Rhonda Stuart, the director of the South East Public Health Unit said that, though she was happy that large numbers of people were vaccinated, “we still have 30 per cent of the population unvaccinated, and that’s still a large group”.

Between 70 and 80 per cent of residents in the south-east have received at least one dose of the coronavirus jab.

The Department of Health on Sunday further ramped up vaccination efforts by rolling out pop-up walk-in clinics across the region, including in Dandenong Plaza.

Dr Stuart and her team are working with community leaders, including Sheikh Salih Dogan of the Emir Sultan Mosque and Be Ha from the Springvale Indochinese Mutual Assistance Association, to promote the importance of vaccination against COVID-19, and warn that the young are not immune from the virus. 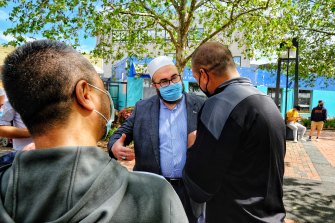 Tamil woman Meha Siva said some Sri Lankan grocery stores had been identified as exposure sites in recent days, and while her community was made up of generally resilient people having fled a war-torn country, the pandemic had had a huge toll on many people, especially the elderly, who were feeling isolated.

“I just want to encourage people to please get vaccinated. Whether you’re an Australian citizen or not, whether you’re a resident or an international student, the vaccine is free,” Ms Siva said. “Like any other community, the virus has affected our community financially and mentally.”

Patrick Kisnorbo, coach of Melbourne City Football Club based in Cranbourne East, had one message: “We want our community to be safe, we want our kids, families, individuals to be safe, and the way to do that is through vaccination.”

Epidemiologist Adrian Esterman, said Victoria’s peak had been “delayed by one or two weeks” due to non-compliance with rules evident on grand final day, meaning the number of cases would continue to rise for some time yet.

“The thing to remember is without vaccination we were expecting there to be more than 4000 cases a day in Victoria now,” Professor Esterman said. “At the moment, we’re seeing 1200 – that sounds like an awful lot, and it is, but it could have been an awful lot worse if there weren’t high vaccination rates.”

Victoria is now unlikely to hit its infection peak until late October or early November and, if the current trend continues, daily infections are predicted to top 4000. However, if the effective reproduction number – the number of people infected by each COVID case – begins to fall again, cases could instead peak at 2500, according to Chris Billington, a research fellow in physics at the University of Melbourne who has been tracking and modelling the spread of the virus.

Mr Weimar is now hoping the state’s high vaccination levels will begin to slow the spread.

“[There are] two things: as the Premier said, get vaccinated, but also you’ve got to hold on to these behaviours for the last few weeks – that is what stops the spread.

“We saw the cause and effect from a week ago, the long weekend AFL grand final created a spike that none of us wanted to see over the last four days. The numbers we see over the next week will be based on our behaviours over the last few days.”

Catherine Bennett, chair in epidemiology at Deakin University, said she was also hopeful the state’s effective reproduction number could begin to fall within a week.

“We saw a bump in cases because we had mass transmission – hopefully that was a one-off, so we will settle down and get that down, and that will happen anyway given we’ve ramped up vaccination,” Professor Bennett said.

“Hopefully that higher vaccination rate in the south-east community will protect people, particularly those who are older and more vulnerable.”

From Monday, the interval between the two Pfizer doses will be shortened from six weeks to three. Around 51.9 per cent of the eligible population in the state have now received two doses of the vaccine, and more than 70,000 people were jabbed on Saturday.

Premier Daniel Andrews said that of the 476 people currently being treated in Victorian hospitals for coronavirus, just 5 per cent were fully vaccinated. He said 98 were in intensive care and 57 were on a ventilator.

“If you are fully vaccinated, you are at but a fraction, a tiny percentage of the risk of being hospitalised and becoming gravely ill, [and] your risk is dramatically reduced,” Mr Andrews said.

“It is the single most important thing you can do to make sure that you don’t finish up in hospital or someone that you love finishes up in hospital. Not only are you at less risk of getting it, less risk of spreading it and if you do happen to get it and you are fully vaccinated, you are protected to a very, very high level.”

Meanwhile, the government has overturned the ban on public toilets at outdoor sporting facilities, including golf courses and tennis courts, to allow people to use the toilets from Tuesday.

Dr Andrew Dowling, reader in contemporary Spanish history at Cardiff University, explained to Express.co.uk that “because London has already shown its willingness to hold one...