‘I don’t hold Alec Baldwin responsible’: Father of shot cinematographer Halyna Hutchins refuses to blame actor for shooting her dead on set and says it was the fault of movie armoury team

The father of cinematographer Halyna Hutchins who was killed by a prop gun in the hands of Alec Baldwin has insisted the A-list actor was not responsible for her tragic death.

In his first interview with the media since the shocking incident, Anatoly Androsovych laid the blame with the film’s armoury team who were responsible for handing Baldwin a loaded weapon.

Anatoly is now fighting to organise visas to grant his wife Olga and daughter Svetlana entry to the US to support Halyna’s husband Matthew and son Andros, who at just 9 years old is left without his mother.

‘We still can’t believe Halyna is dead and her mother is going out of her mind with grief,’ Anatoly told the Sun on Sunday.

‘But I don’t hold Alec Baldwin responsible — it is the responsibility of the props people who handle the guns.’

‘[Halyna’s son] has been very badly affected — he is lost without his mother.’

Born in Ukraine and raised on a Soviet military base ‘surrounded by reindeer and submarines’, Halyna was tipped for a bright future in Hollywood when her life was tragically cut short. (Halyna pictured in 2018) 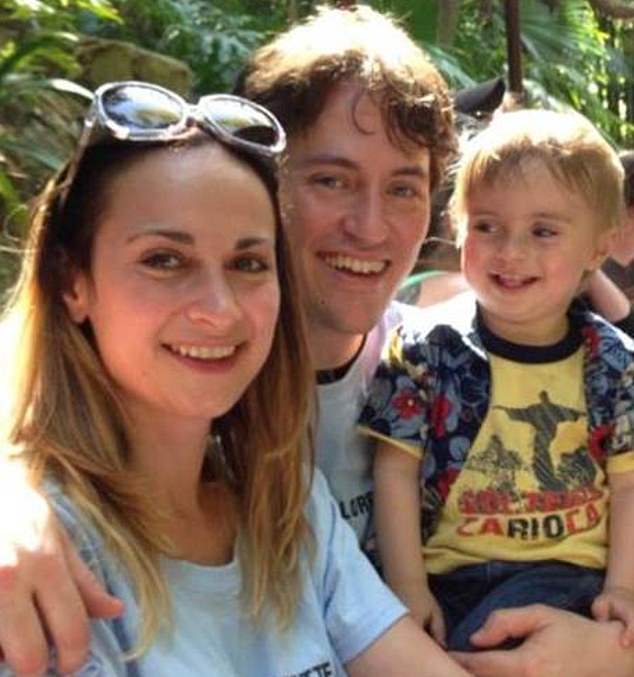 Halyna, 42, leaves behind her husband Matthew, a lawyer and Harvard graduate, and a 9-yar-old son, Andros 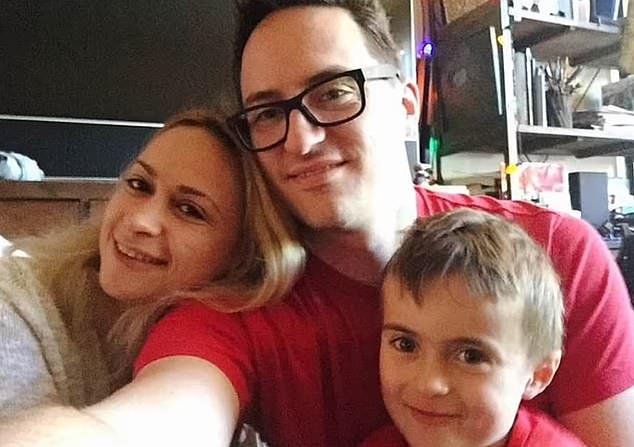 Matthew Hutchins told DailyMail.com on Friday: ‘I have spoken with Alec Baldwin and he is being very supportive. We greatly appreciate all the sympathy,’ he said. ‘It feels like people are going to move mountains.’ 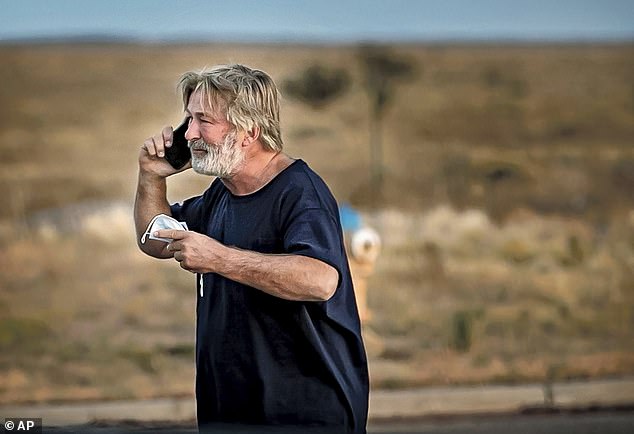 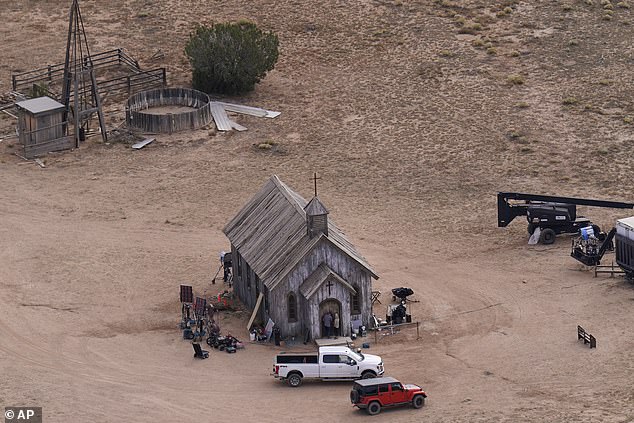 Baldwin shot and killed Halyna Hutchins on the set of his new movie ‘Rust’ on a ranch in Santa Fe, New Mexico, on Thursday at 1.50pm

Baldwin accidentally killed 42-year-old Halyna Hutchins, the Director of Photography for his new movie ‘Rust’, on a ranch in Santa Fe, New Mexico on Thursday at 1.50pm.

He is believed to have fired a single round from a Colt revolver that somehow struck both Hutchins and the movie’s director, 48-year-old Joel Souza.

It was revealed yesterday that the revolver was used by other members on the set for target practice and had likely fired live rounds prior to the shooting of Halyna and director Souza.

Halyna’s younger sister Svetlana Androsovych, has railed against the ‘negligence’ on the film set which she blamed for her older sibling’s death.

‘How was this negligence allowed by such a team of professionals? This is just such an absolutely absurd coincidence.

‘I don’t know where the investigation will lead, but there are so many guesses. God only knows what happened, it’s just so incredibly hard to live through it. 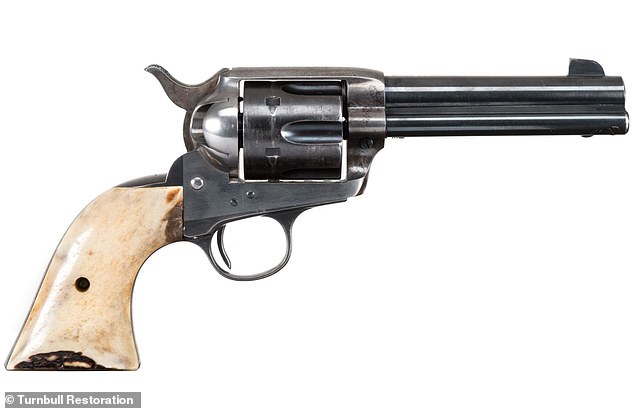 Alec Baldwin was wielding a vintage Colt pistol when it accidentally went off (pictured:  Colt pistol manufactured between 1873-92. Rust is set in the 1880s)

‘The only thing we want right now is to be there with my mum next to Halyna’s husband and their son to make sure he feels our support.’

Father Anatoly confirmed the family’s priority is to secure visas to allow them to visit Halyna’s husband Matthew Hutchins and son Andros, while Matthew will decide whether he will press charges over his wife’s death.

Meanwhile, dozens of mourners attended a candlelit vigil in memory of Halyna last night at the Albuquerque Civic Plaza, in Alberquerque, New Mexico.

Mourners held candles, gave heartfelt speeches about Hutchins, and shared what a beloved member of the community she was.

Matthew was spotted along with the couple’s son, nine-year-old Andros checking out from a hotel in New Mexico the same day.

Andros and Matthew attended a private memorial held in Santa Fe on Friday, with Alec Baldwin also in attendance. It was reported that grief counsellors were present at the service.

Another vigil for Hutchins is planned for Sunday from 6pm to 7.30pm at the IATSE Local 80 headquarters in Burbank. 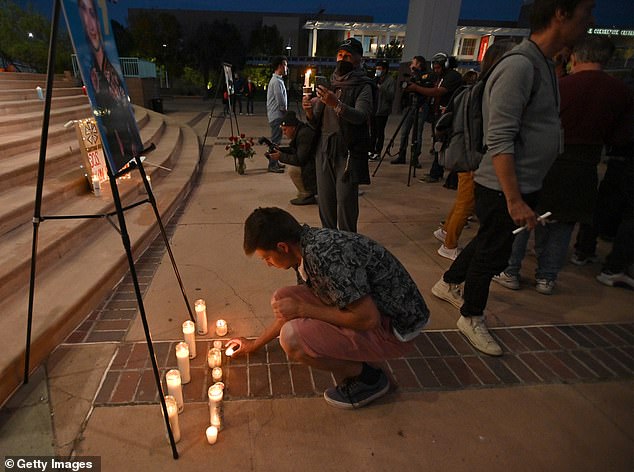 Christian Hutchins, no relation to cinematographer Halyna Hutchins, places a candle in front of a photo of Hutchins during a vigil held in her honour at Albuquerque Civic Plaza on October 23 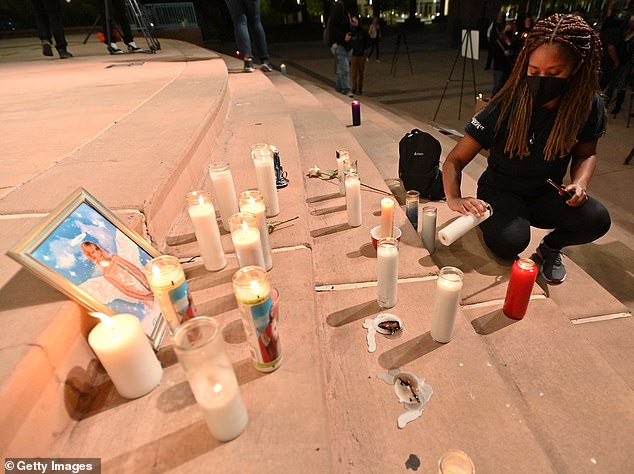 Another vigil for Hutchins, who was a 42-year-old mother, is planned for Sunday from 6pm to 7.30pm at the IATSE Local 80 headquarters in Burbank 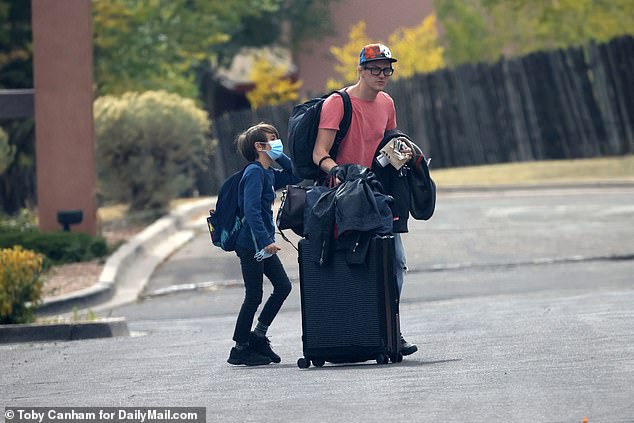 Matthew Hutchins and son Andros leave a New Mexico Hotel and relocate to another location after the tragic death of wife Halyna Hutchins, who was accidentally shot by Alec Baldwin while making a western movie on Thursday 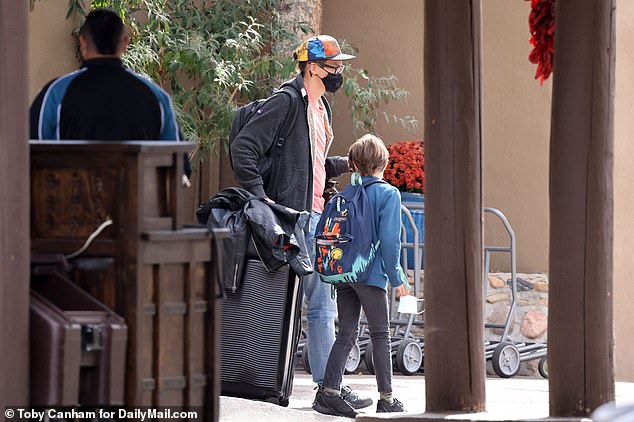 Ukraine-born Halyna Hutchins, 42, was the mother of 9-year-old Andros (pictured leaving New Mexico with his father)

Matthew, a lawyer and Harvard graduate, told DailyMail.com on Friday: ‘I have spoken with Alec Baldwin and he is being very supportive.’

‘There’s obviously a lot to deal with whenever there’s any death in the family. We’re moving around to address all the things we need to do on the ground. There’s a lot of phone calls and messages.

‘And we greatly appreciate all the sympathy,’ he said. ‘It feels like people are going to move mountains.’

In two tweets on Friday, Baldwin said: ‘There are no words to convey my shock and sadness regarding the tragic accident that took the life of Halyna Hutchins, a wife, mother and deeply admired colleague of ours.

‘I’m fully cooperating with the police investigation to address how this tragedy occurred and I am in touch with her husband, offering my support to him and his family.

‘My heart is broken for her husband, their son, and all who knew and loved Halyna.’ 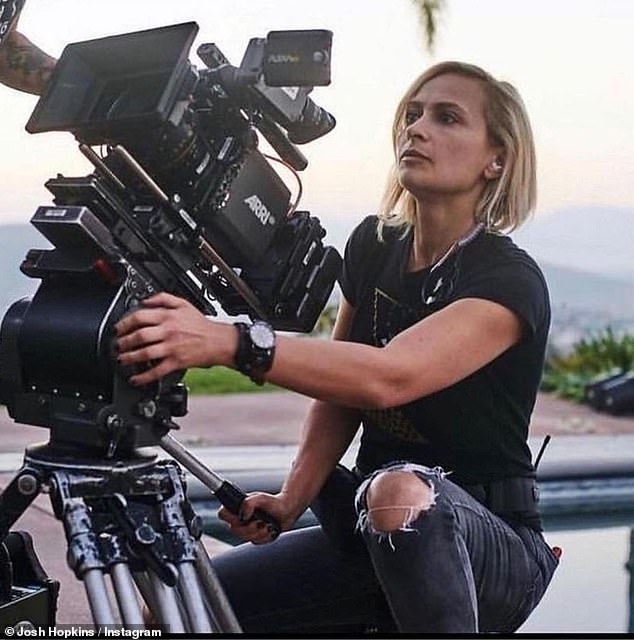 Richard Denton, producer behind Shakespeare Uncovered and many films in the former USSR, said: ‘Halyna was the most wonderful, vital, lively and positive person to work with. She was friendly and enormously helpful. 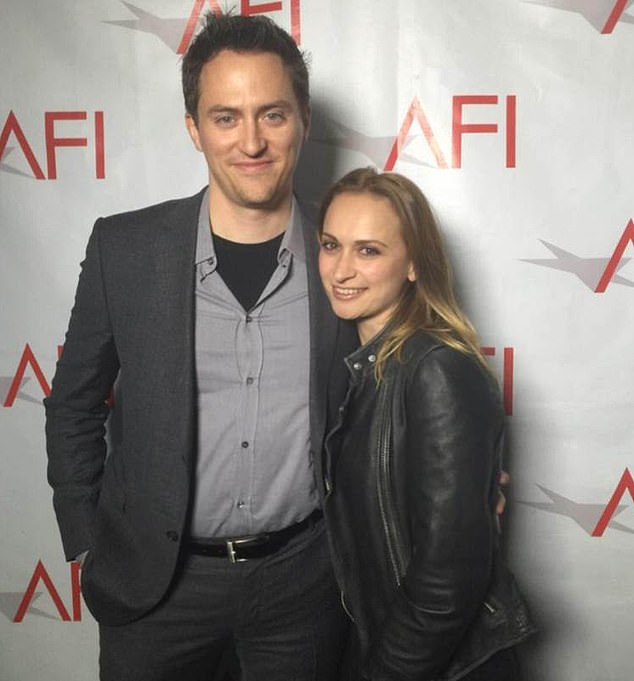 Halya and Matthew Hutchins share a 9-year-old son Andros, who according to Halya’s father is struggling with the death of his mother

Born in 1979, Halyna Hutchins was the daughter of military parents and grew up on a Soviet base ‘in the Arctic circle’. Recalling what it was like, she said they were ‘surrounded by reindeer and nuclear submarines’.

In a sign of her broad interests, Halyna, who was fluent in Russian and English, attended the National University of Kyiv, Ukraine’s most prestigious higher education institution, and graduated with a degree in International Journalism.

She used this as a ticket to work abroad and spent time as an investigative journalist, working in print and documentaries.

Richard Denton, producer behind Shakespeare Uncovered and many films in the former USSR, said: ‘Halyna was the most wonderful, vital, lively and positive person to work with. She was friendly and enormously helpful.

‘She handled everything from translating interviews to making Leonid’s horse move in the right direction. She was completely unpretentious and incredibly professional.’

At some point Hutchins moved to the US, settling in California. She married husband Matthew, a lawyer and Harvard graduate, before welcoming their much wanted son Andros in 2012. 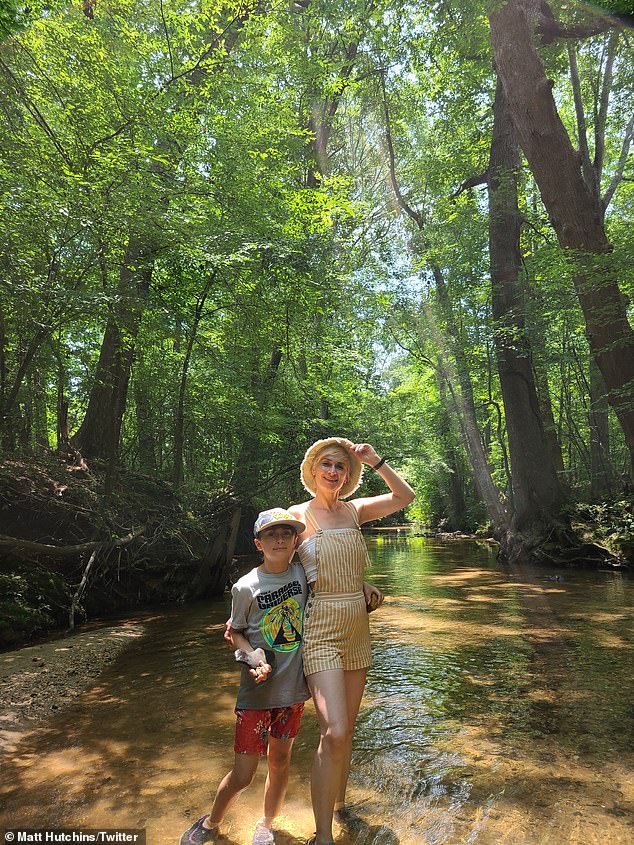 Halyna Hutchins pictured with son Andros, 9, in a tweet shared by husband Matthew on Friday

‘I remember when Halyna and I would talk about how much she wanted to have a child so many years ago,’ wrote her friend, Stephanie, ‘and being at the hospital the day he was born and seeing her so filled with happiness.’

Shortly after Andros’s birth Hutchins, who had begun working on short films, enrolled on a two-year course at the American Film Institute Conservatory to hone her skills as a cinematographer.

A cinematographer, also known as a director of photography, is in charge of the film and lighting crews on set.

In 2018, Halyna was named as part of the inaugural class of the 21st Century Fox DP Lab, a networking cohort designed to expand opportunities for female cinematographers by connecting them with working professionals.

The following year, she was hailed as one of the ‘rising stars of cinematography’ in respected industry publication American Cinematographer.