‘This immediately covers more than two thirds of oil imports from Russia, cutting a huge source of financing for its war machine,’ Mr Michel wrote on Twitter.

The leaders also agreed to cut off the largest Russian bank Sberbank from the SWIFT system and to ban three more Russian state-owned broadcasters, he added.

It was agreed at a summit focused on helping Ukraine with a long-delayed package of sanctions that was blocked by Hungary. 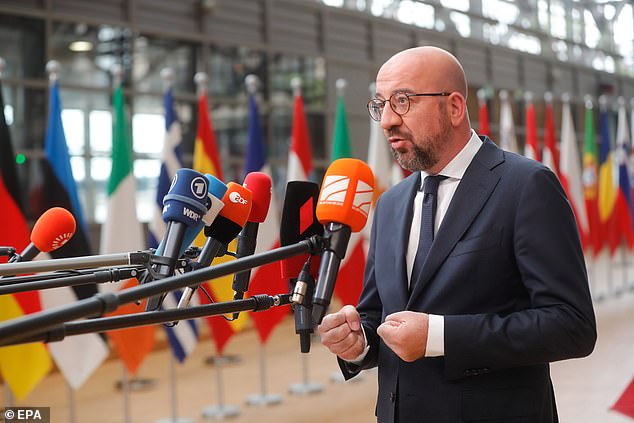 The watered-down embargo covers only Russian oil brought in by sea, allowing a temporary exemption for imports delivered by pipeline.

The EU had already imposed five previous rounds of sanctions on Russia over its war.

It has targeted more than 1,000 people, including Russian President Vladimir Putin and top government officials, as well as pro-Kremlin oligarchs, banks, the coal sector and more.

But the sixth package of measures announced on May 4 had been held up by concerns over oil supplies.

Hungary Prime minister Viktor Orban had made clear he could support the new sanctions only if his country’s oil supply security was guaranteed.

The landlocked country gets more than 60 per cent of its oil from Russia and depends on crude that comes through the Soviet-era Druzhba pipeline.

Earlier today, Ukraine’s president urged EU leaders to set aside their differences and endorse a long-delayed package of sanctions aimed at piling more economic pressure on Moscow to halt the war.

Addressing the EU leaders Monday by video-link in a 10-minute message, Ukrainian President Volodymyr Zelenskyy urged them to end ‘internal arguments that only prompt Russia to put more and more pressure on the whole of Europe.’

He said the sanctions package must ‘be agreed on, it needs to be effective, including (on) oil,’ so that Moscow ‘feels the price for what it is doing against Ukraine’ and the rest of Europe.

Only then, Zelenskyy said, will Russia be forced to ‘start seeking peace.’ 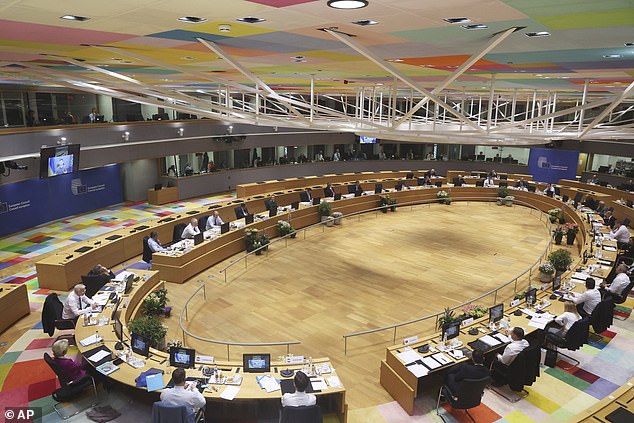 Addressing the EU leaders Monday by video-link in a 10-minute message, Ukrainian President Volodymyr Zelenskyy urged them to end ‘internal arguments that only prompt Russia to put more and more pressure on the whole of Europe’

It’s not the first time he has demanded that the EU target Russia’s lucrative energy sector and deprive Moscow of billions of dollars each day in supply payments.

Hungary was leading a group of EU countries – along with Slovakia, the Czech Republic and Bulgaria – that rely heavily on Russian oil and can’t afford to turn off the pumps.

Hungarian Prime Minister Viktor Orban was adamant on arriving at the two-day summit in Brussels that a deal was not in sight, while Czech Prime Minister Petr Fiala suggested that delaying oil sanctions against Russia could be a solution.

‘We’re ready to get rid of our dependence on Russia’s energy sources, but we’re not able to do it in a short term,’ Mr Fiala said.

According to several diplomats, leaders will try to reach a deal for an EU embargo on Russian oil brought in by sea by the end of the year that would cover more than two-third of the EU’s oil imports from Russia. 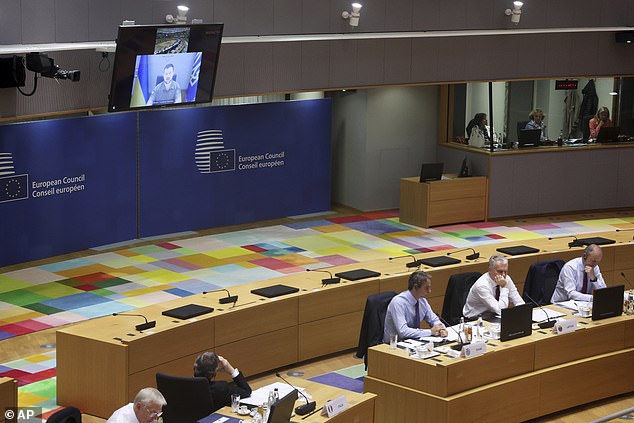 Orban said he could support the new sanctions if Hungary’s oil supply security is guaranteed. Hungary and Slovakia depend on Russian oil that comes through the Soviet-era Druzhba pipeline.

The problem with hitting sea-transported Russian oil is that countries like Belgium, Germany and the Netherlands – which are most reliant on that form – would suffer a surge in oil prices, distorting competition because Hungary would still be purchasing cheaper Russian oil.

Latvian Prime Minister Krisjanis Karins urged his EU counterparts to get over their differences on oil, saying that member countries are ‘getting a little bogged down in all of the details and we’re forgetting the big picture.’

‘It’s only money, and Ukrainians are paying with their lives,’ he said. ‘Only when Russia is defeated can we in Europe feel safe.’ 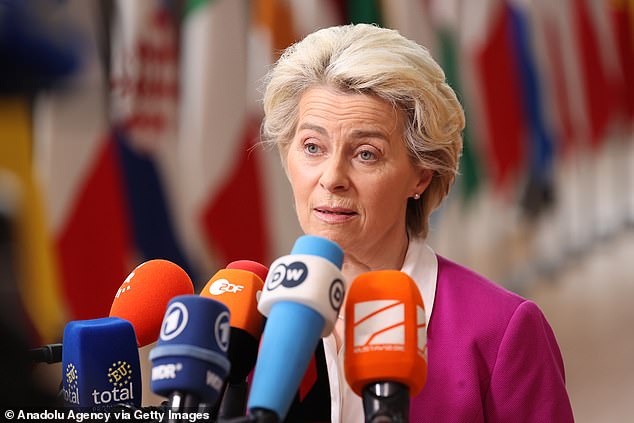 European Commission President Ursula Von der Leyen all but ruled out a breakthrough at the summit, saying: ‘My expectations are low that it will be solved in the next 48 hours’

German Chancellor Olaf Scholz was cautiously optimistic. ‘Everything that I hear makes it sound as if a consensus could be reached and, sooner or later, it will be,’ he told reporters.

European Commission President Ursula Von der Leyen all but ruled out a breakthrough at the summit, saying: ‘My expectations are low that it will be solved in the next 48 hours.’

The new sanctions package will also include an asset freeze and travel ban on individuals.

Russia’s biggest bank, Sberbank, will be excluded from SWIFT, the major global system for financial transfers. Three big Russian state-owned broadcasters will also be prevented from distributing their content in the EU.

The two-day summit will also focus on continued EU financial support to Ukraine – probably the endorsement of a 9 billion-euro ($9.7 billion) tranche of assistance – and on military help and war crimes investigations.

The issue of food security will be on the table tomorrow, with the leaders set to encourage their governments to speed up work on ‘solidarity lanes’ to help Ukraine export grain and other produce.

Some protesters gathered outside EU buildings Monday before the summit, holding signs like ‘No to Russian oil and gas.’