Elton John DID try to have children with his ex-wife but struggled to conceive despite his claims in his memoir that he didn’t want to be a parent until he met David Furnish, court documents claim

Sir Elton John did try to have children with ex-wife Renate Blauel, despite claims in his memoir that he did not want to be a parent until he met his husband David Furnish, according to new court documents.

As part of High Court papers, seen by The Sun, it is claimed the Rocketman star did try to have children with Ms Blauel, but the pair struggled to conceive.

The claims appear to go against Sir Elton’s suggestion in his 2019 autobiography, entitled ‘Me’, in which he said he did not want to become a parent until he met Candian filmaker Furnish – whom he married in 2014.

The papers come as Ms Blauel come as part of her law suit against Sir Elton, in which she claims attempts to ‘shed her public identity’ after their divorce have been ruined by him writing about their marriage in his autobiography.

She is suing the singer for £3million in damages.

Ms Blauel, who was married to Sir Elton between 1984 and 1988, says passages in the Rocketman star’s autobiography breach an agreement that they would never discuss their marriage publicly.

In court papers, filed today at the High Court, Ms Blauel, 67, claims she has tried to fade away from public attention – going as far as to change her deed poll and relocating within the UK.

But in the papers she claims 73-year-old’s mention of her the book, in which talked positively of her, has thrown her back into spotlight  – causing ‘recurring nightmares and agoraphobia’.

She also claims the mention of her in the autobiography, as well as scenes in the 2019 biopic Rocketman, breaches a non-disclosure agreement in their divorce agreement.

In defence papers, Sir Elton’s legal team denies breaching the agreement and said he was not aware of the mental health issues, while a friend today told the Sun: ‘He very much hopes she will see sense and drop this case.’ 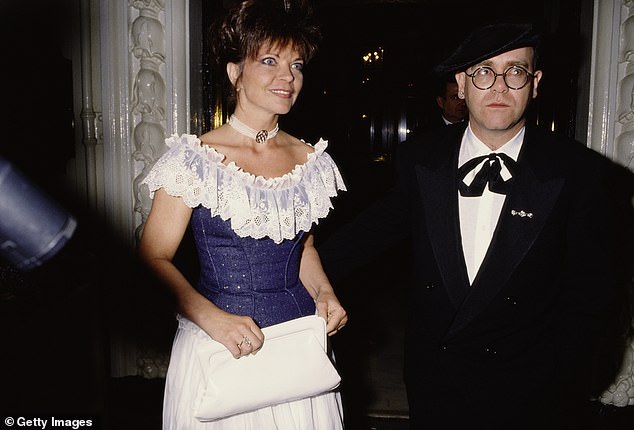 Renate Blauel, who was married to Sir Elton (the two pictured together) between 1984 and 1988, says passages in the Rocketman star’s autobiography, entitled ‘Me’, breach an agreement that they would never discuss their marriage publicly

Ms Blauel, a German-born sound engineer who met the singer in 1983 through work, is claiming damages of potentially £3m and an injunction to restrain further commenting on her or the marriage.

Meanwhile her barrister Adam Wolanski QC has written in court documents that the publications caused her mental harm.

‘She has, since the release of the film, suffered recurring nightmares, agoraphobia, anxiety, depression, fear, and has had to relive her past constantly,’ it says in the court documents. 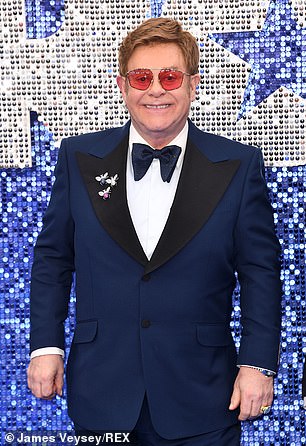 In defence papers, Sir Elton’s legal team denies breaching the agreement and said he was not aware of the mental health issues

‘The publication of the memoir exacerbated these symptoms. She has needed, and will continue to need, medical intervention and therapy.’

Sir Elton and German-born Ms Blauel met in 1983 while the star was finishing his Too Low for Zero album, which included the hit singles ‘I’m Still Standing’ and ‘I Guess That’s Why They Call It The Blues’.

They were married at a star-studded ceremony in Sydney, Australia, in February 1984, but divorced four years later.

‘After her separation from the defendant, the claimant wanted to live as privately as possible and, in pursuance of this objective, to shed her identity as the defendant’s former wife,’ the court documents say.

She bought a new home in a friend’s name, hid her identity from removal men and told most people she knew she was leaving the country, when she was in fact staying in the UK and changing her identity.

Of the new friends she made after the house move in spring 2001, she only told three that she had been married to Sir Elton.

Ms Blauel had also changed her name by deed poll to distance herself from the marriage.

She has since changed it back in order to sue him, but plans to revert to her other name after the case is concluded, says the barrister.

In the court documents it said Ms Blauel had ‘repeatedly requested’ Sir Elton adhered to the spirit of the agreement, which states that the former couple will never ‘discuss the marriage or the reasons for the separation, save under terms of confidentiality within their own immediate families and in privileged circumstances with professional advisers.’ 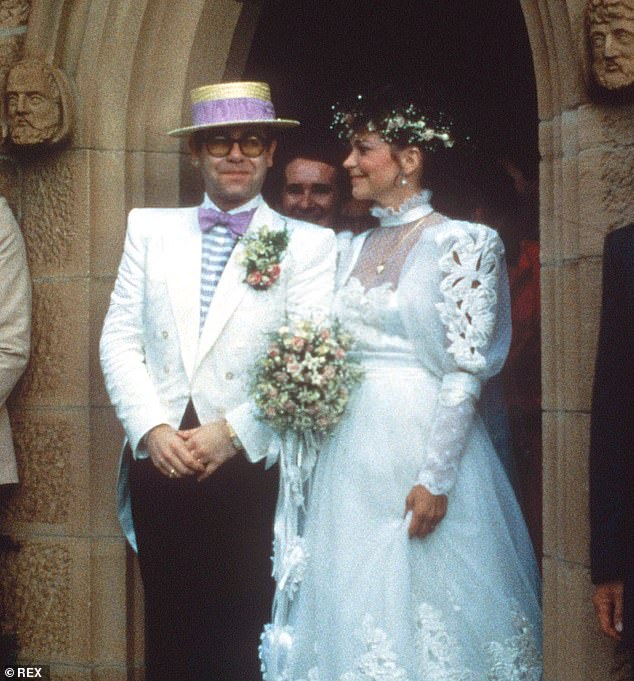 Renate Blauel, pictured on her wedding day to Sir Elton John in 1984, is suing him ex for £3million, claiming he broke the terms of their divorce by mentioning their marriage in his autobiography

The documents add Ms Blauel had been ‘largely successful’ in her attempts to hide her identity, was living ‘quietly and privately’ and would have ‘expected that she would continue to for the rest of her life’.

They say comments referring to Ms Blauel and their marriage on Instagram and in the autobiography breached the terms of the divorce agreement.

Scenes in the ‘Rocketman’ movie revolving around their relationship were also breaches, she claims.

The book and film were both hugely successful, the documents state, resulting in widespread interest in Ms Blauel and the marriage.

She had since become the subject of ‘widespread press scrutiny and discussion,’ causing her psychological damage.

But in defence papers, Sir Elton’s barrister Colin West QC wrote that the the singer denies breaching the terms of the divorce agreement or knowing she was susceptible to mental health issues. 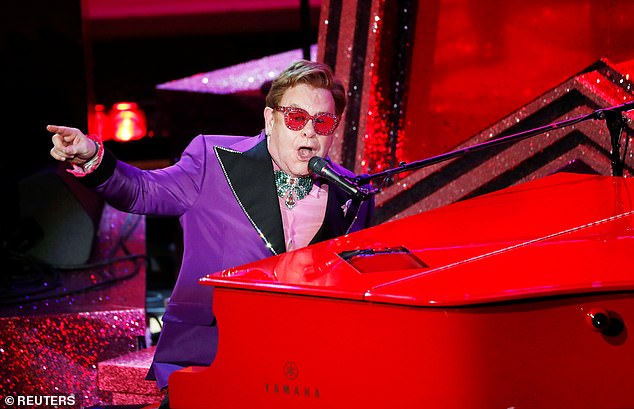 Sir Elton wrote in his autobiography, Me, that he regretted ‘breaking the heart,’ of German sound engineer Renate

She had not complained when he spoke about their marriage in the past and correspondence between them since their divorce had previously been ‘warm and friendly.’

The clause in the divorce agreement could only have been intended to prevent discussion of confidential matters, not common knowledge like Sir Elton’s sexuality, says the barrister.

‘None of the disclosures about which the claimant complains concern matters which are in fact – or are any longer – private and confidential.’

Mr West denies that Sir Elton had any day to day involvement in the movie, while changes to the book were made after taking comments from Ms Blauel.

The Your Song singer married Renate Blauel in 1984, but they split up in 1988, in a divorce that is thought to have ended with Ms Blauel leaving with a settlement of between £5million and £10million. 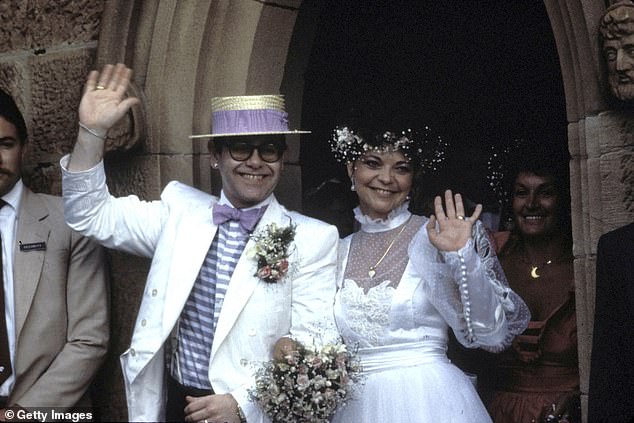 Sir Elton married Renate in February 1984, having met the year before while working on an album

According to The Sun, Ms Blauel, sought an injunction over the release of the acclaimed 2019 biopic, Rocketman.

Court papers claim Sir Elton had agreed to remove parts of his autobiography before it was published last year.

However in one part of Me, he expressed regret at ‘breaking the heart,’ of his ex-wife.

A source told The Sun: ‘Elton is shocked and saddened by Renate’s claim, especially as he has only ever praised her publicly.’

Another added: ‘He has always had a very pleasant relationship with Renate, respects her enormously and would never have said anything revealing about their marriage.’ 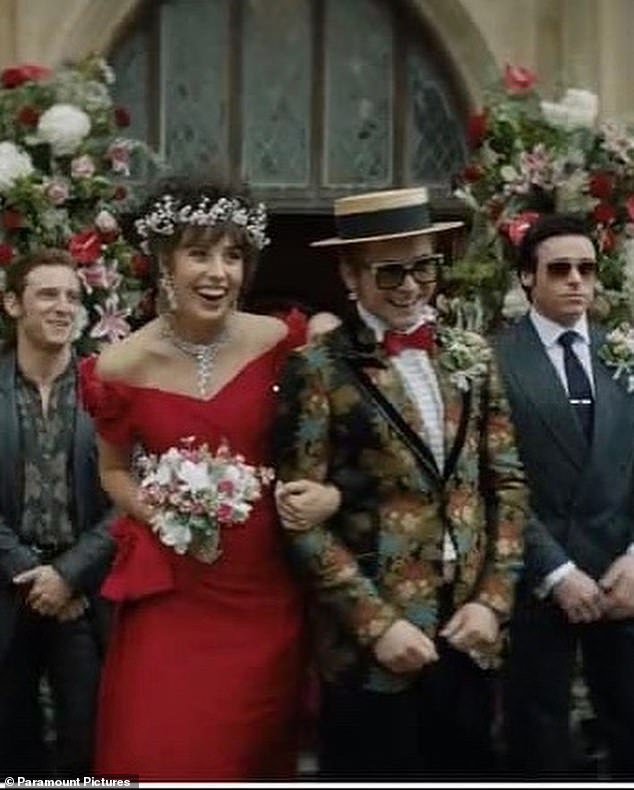 In 2005 Sir Elton entered a civil partnership with David Furnish, the couple were formally married in 2014, when same-sex marriage became legal in England and Wales.

The couple have two sons.

Ms Blauel moved to Germany in 2001 having sold up in Surrey, and she is also understood to have bought a town house in London with her new partner. But other than that, she has simply gone to ground. Until now.

The friend explains her thinking behind this new legal move: ‘She didn’t see the book before publication. She got wind of it and said: ‘Make sure, please, that I am not in it’. She didn’t want to be made to look a fool.

‘As far as I am aware she sent warnings about the book. Maybe they never got shown to Elton, but the book came out and she was in it, and so here we are.’