Eco-activists fighting Cumbrian mine are ignoring the ‘inconvenient truth’ that Britain will be forced to import foreign coal that is WORSE for environment if £160m project is blocked, inquiry hears

Opponents of plans to open the UK’s first deep coal mine in 30 years are ignoring an ‘inconvenient truth’ that the alternative is to rely on foreign imports which are worse for the environment, a public inquiry was told today.

A lawyer for West Cumbria Mining, which wants to mine for coking coal for use in steel production, told the hearing a decision on whether to give it the go-ahead should not be ‘hijacked’ by the debate over climate change.

The proposed mine, to be known as Woodhouse Colliery, would supply the British and European steel industry until 2049 and create 532 direct jobs in the deprived Whitehaven area, according to the firm behind the plan.

Cumbria County Council approved the mine three times before suspending its permission to further consider carbon policy ‘implications’ following a fierce backlash amid claims the plans would damage Britain’s reputation.

Campaigners said the move undermined Ministers’ commitment to cut carbon dioxide emissions to net zero by 2050 and harmed its credibility ahead of hosting November’s international Cop26 climate summit in Glasgow.

It was claimed that climate change presented an ‘existential threat’ and the UK would be accused of ‘rank hypocrisy’ if it approved the coal mine while trying to persuade the likes of China and India to go green.

But WCM’s legal team said that not approving the mine would simply mean ‘offshoring emissions’ as the UK would still use coking coal from the US, and locally mined coal would offset emissions from imported coal. 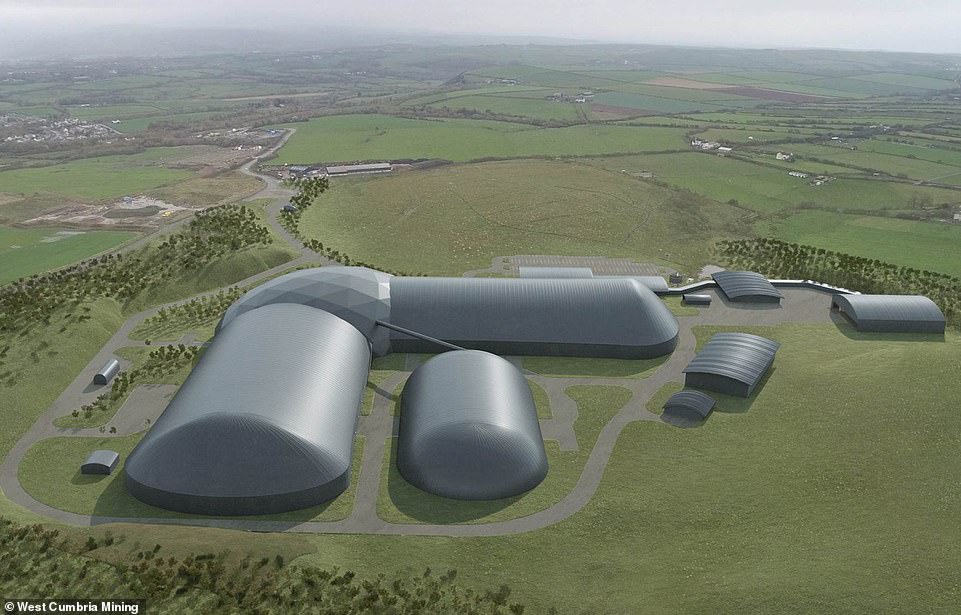 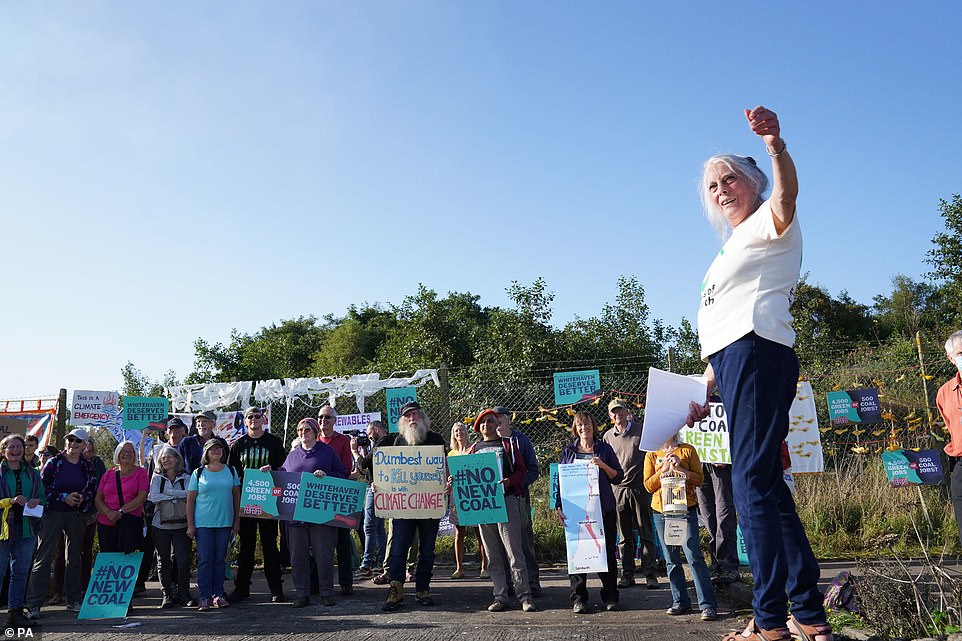 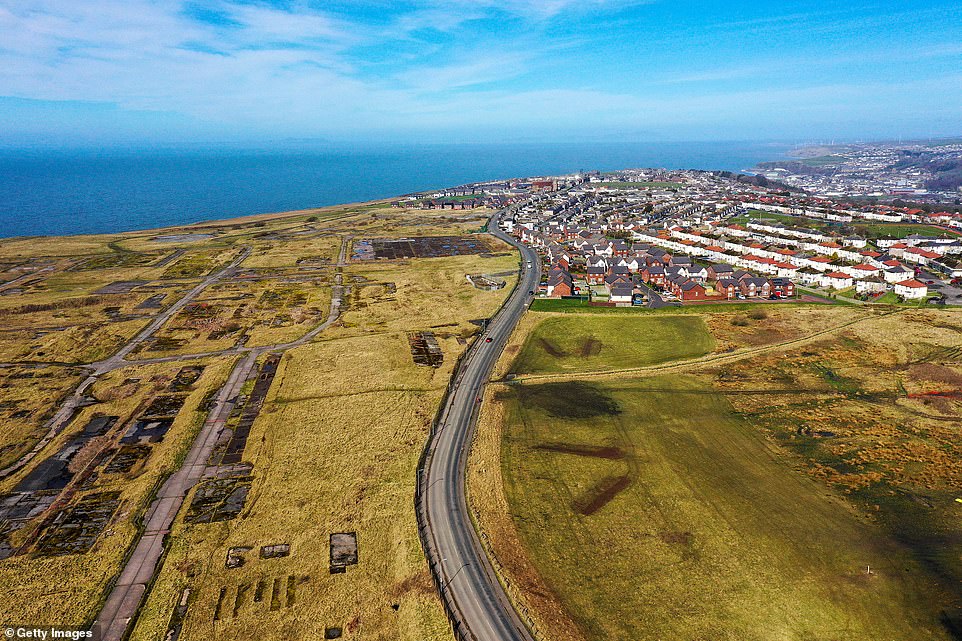 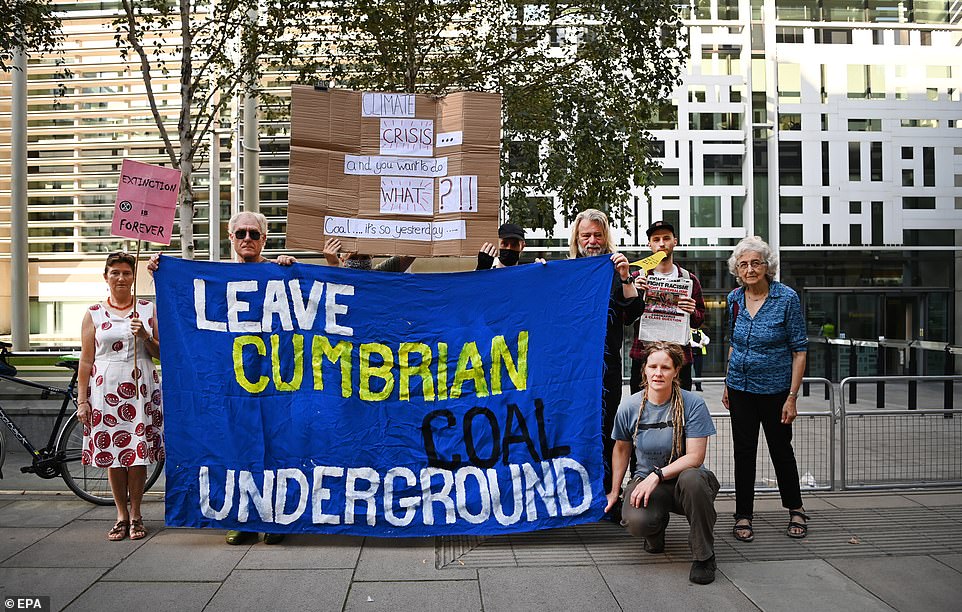 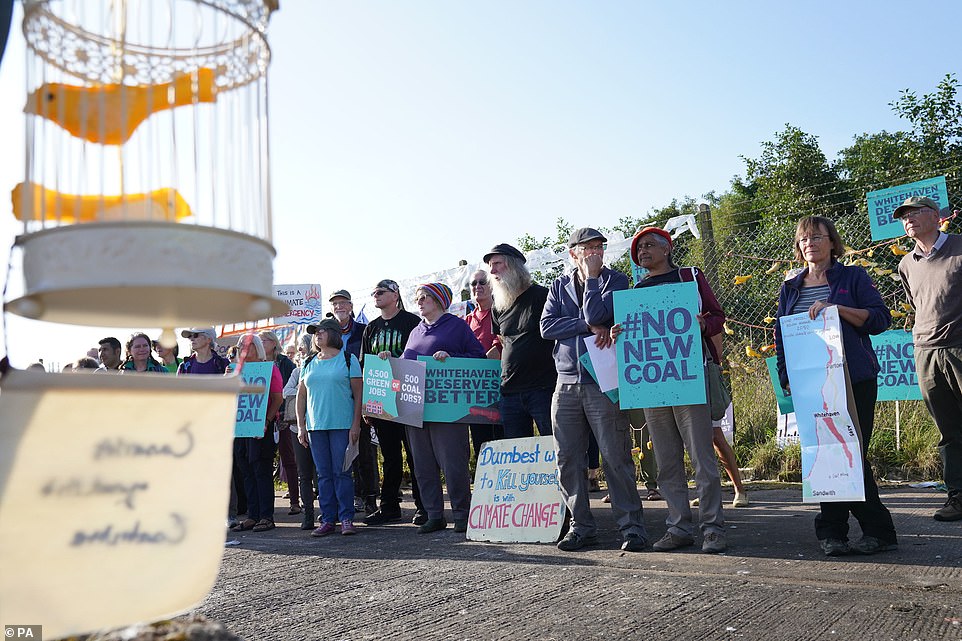 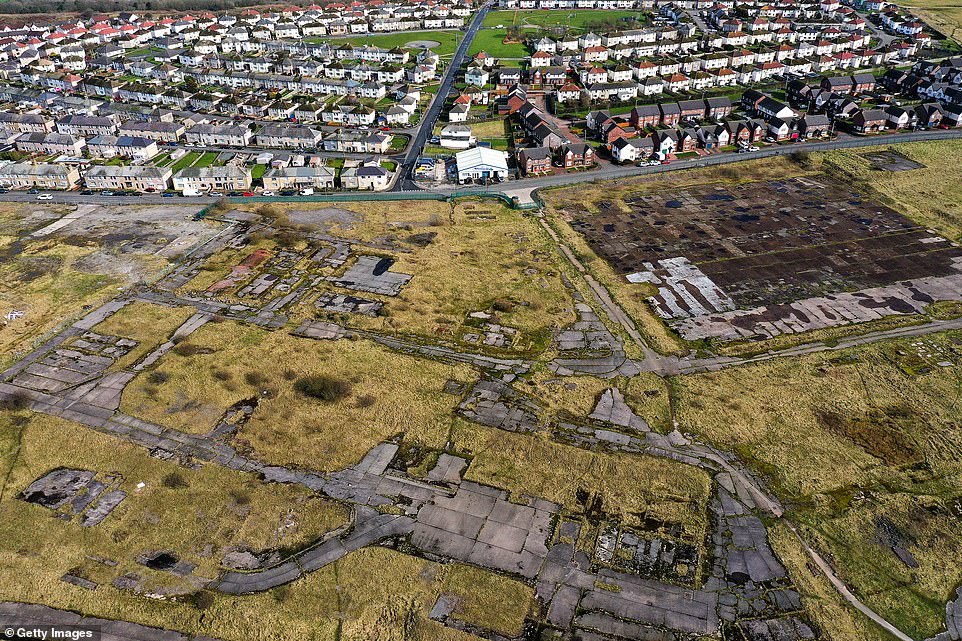 A barrister for Friends of the Earth – who want the plan rejected – said blocking even a single coal mine would represent a victory in the battle against an ‘existential threat’ facing humanity.

In March, Communities Secretary Robert Jenrick decided to ‘call in’ the application, and today a planning inquiry began examining the arguments on both sides.

What is coking coal and why is it controversial?

Metallurgical (met) coal (sometimes referred to as coking coal) is a naturally occurring sedimentary rock found within the Earth’s crust.  The coal is ‘baked’ in a coke oven which forces out impurities to produce coke, which is a form of almost pure carbon.

Modern steel plants, the likes of which are predominantly found in the UK and Europe, include extensive gas treatment and capture to significantly reduce emissions.

The steel that is produced is used in a wide range of domestic uses (e.g. cars, kettles, trains) as well as in the manufacture of wind turbines and nuclear power stations, key alternatives to historical coal-powered energy generation. Coking coal for steel is different to thermal coal which is used to create steam to power turbines for creating electricity.

Following a government change in policy in early 2018, all coal fired power generation in the UK will end by October 2025 and as such will no longer form part of the UK power source in the very near future.

Metallurgical coal was first used to make steel in China in the 11th Century.  It takes around 770 kilograms of met coal to make the steel for a typical mid-sized car. The quality of the metallurgical coal that Woodhouse Colliery will produce is equivalent to premium US High Volatile ‘A’ coal, WCM claims.

Gregory Jones QC, for West Cumbria Mining (WCM), said the existence of man-made climate change was not in dispute.

But referencing former US vice-president Al Gore’s campaign to highlight the threat of global warming, he said opponents had to face an ‘inconvenient truth’ – that coking coal ‘remains essential to the steel industry’.

The alternative to sourcing it in the UK from a ‘modern, net zero mine’ was continuing to import it from American mines with far higher carbon emissions, he said.

Mr Jones said it was easy to object to the mine on the basis that ‘coal is dirty and bad’. However he argued that the alternative route of relying on imports meant opposition voices ‘amount to little more than emissions offshoring’.

‘Focus on the inquiry rightly should be on the effects of this development, and not hijacked into wider objections against the UK, EU and global steel industries,’ he added.

However Paul Brown QC, representing Friends of the Earth, said ‘drastic action’ was needed to avert an ‘environmental disaster’ caused by climate change.

He argued WCM was displaying ‘double standards’ by acknowledging the threat facing the planet while arguing in favour of extracting more fossil fuel.

Mr Brown said there was ‘an obvious cognitive dissonance’ between accepting ‘the mammoth scale of the global climate change challenge we face’ while proposing to open a new coal mine.

‘That contradiction lies at the centre of this inquiry,’ he added.

He argued that in order to meet its carbon reduction targets, the British steel industry would need to move away from a reliance on coking coal and adopt greener technologies, rendering the proposed mine ‘a stranded asset’.

Highlighting the impact on the UK’s global reputation, he added: ‘The UK can only credibly claim to be a world leader on climate practice if it practises what it preaches.’ 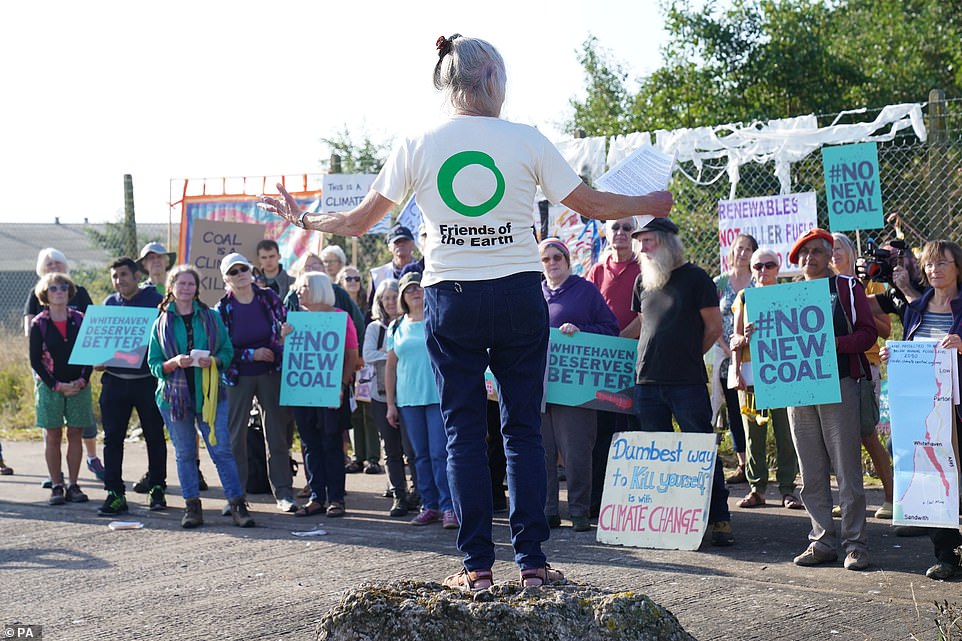 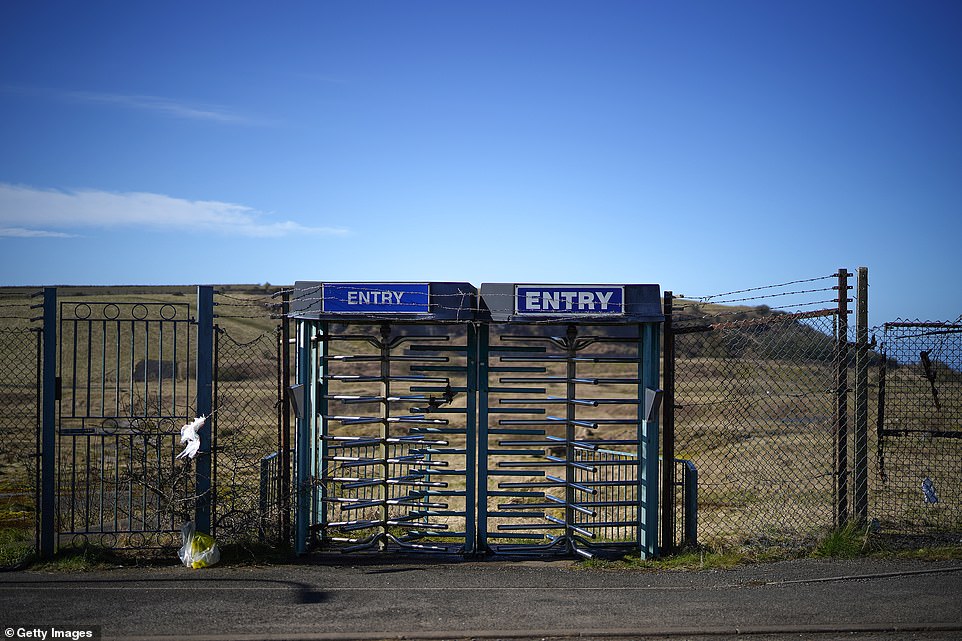 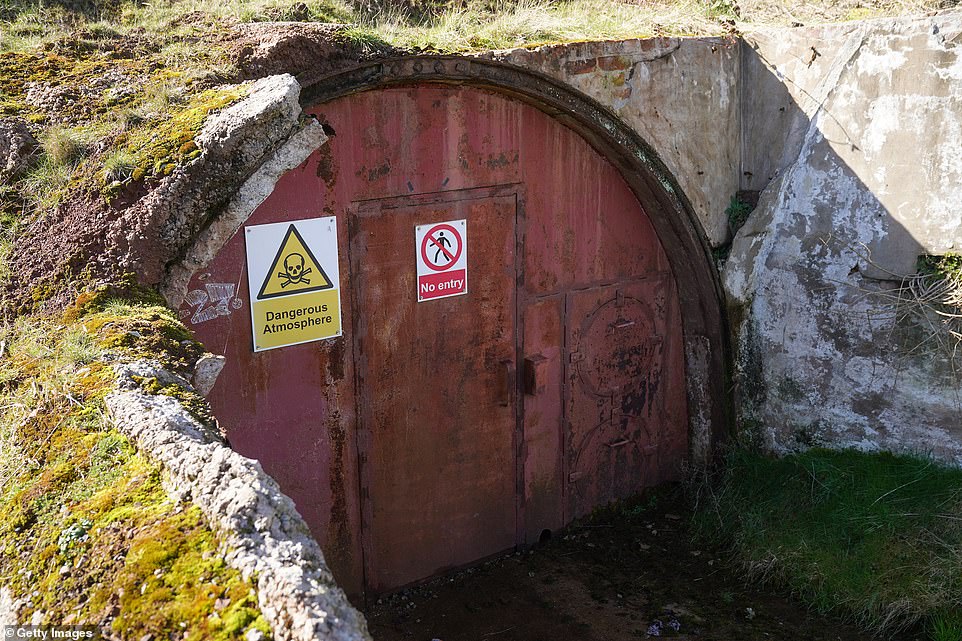 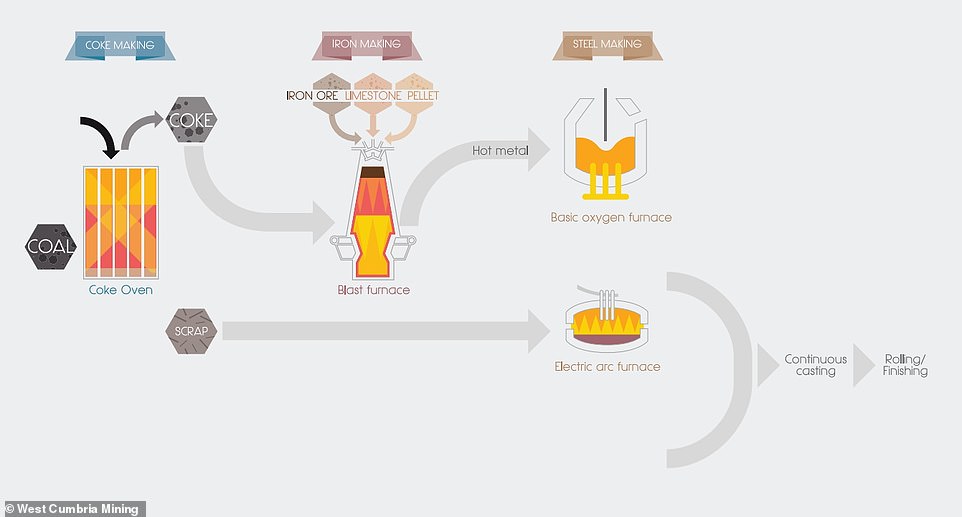 This graphic shows the steel making process. The proposed mine would supply the British and European steel industry until 2049 and create 532 direct jobs in the deprived Whitehaven area, according to the firm behind the plan 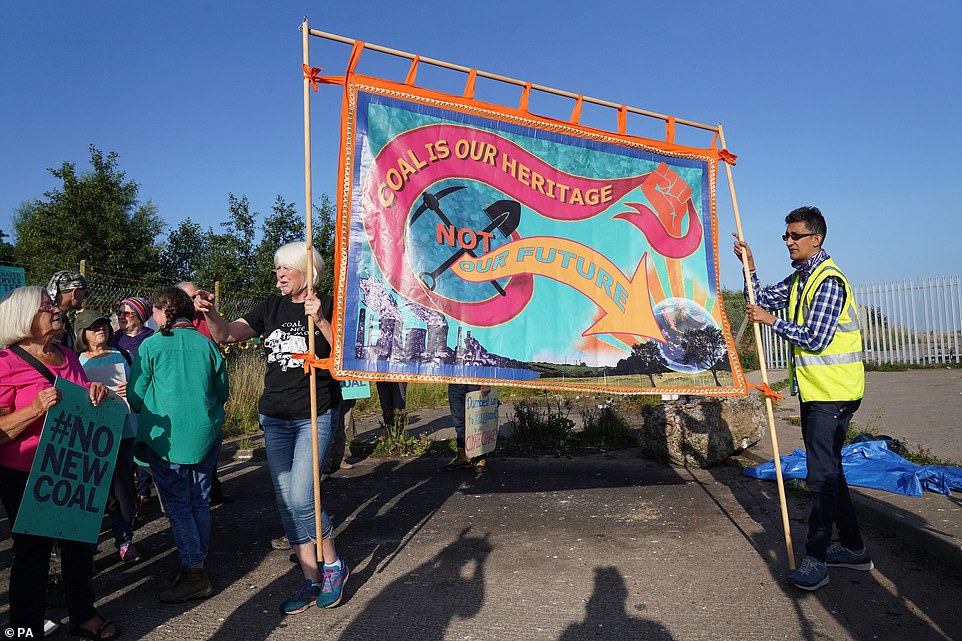 Estelle Dehon, representing South Lakes Action on Climate Change, which also opposes the plan, told the hearing the UK must ‘talk the talk and walk the walk’ when it came to tackling the ‘climate crisis’.

Today, protesters opposed to the plan gathered outside the derelict former chemical works where the mine is being proposed as well as in Whitehall.

Cumbria council is adopting a neutral position at the inquiry, which is sitting virtually and is expected to last up to 16 days.

Planning inspector Stephen Normington’s conclusion will not be binding on Mr Jenrick, who has the final decision on whether to approve the mine.