London: Dubai’s ruler Sheikh Mohammed bin Rashid al-Maktoum ordered the phones of his ex-wife and her lawyers to be hacked as part of a “sustained campaign of intimidation and threat” during the custody battle over their children, England’s High Court has ruled.

Mohammed used the sophisticated “Pegasus” software, developed by Israeli firm NSO for states to counter national security risks, to hack the phones of Princess Haya bint al-Hussein, half-sister of Jordan’s King Abdullah, and some of those closely connected to her, according to the rulings. 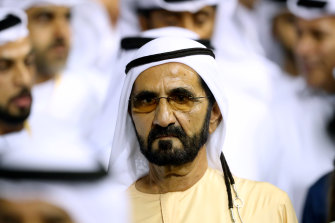 Sheikh Mohammed bin Rashid al-Maktoum had denied the allegations of hacking, but a court ruled against him.Credit:Getty Images

Those working for him also tried to buy a mansion next door to Haya’s estate near the British capital, intimidatory action the court ruled that left her feeling hunted, unsafe and like she “cannot breathe anymore”.

The latest rulings come 19 months after the court concluded that Mohammed had abducted two of his daughters, mistreated them and held them against their will.

“The findings represent a total abuse of trust, and indeed an abuse of power to a significant extent,” Judge Andrew McFarlane, President of the Family Division in England and Wales, said in his ruling.

The sheikh rejected the court’s conclusions, saying they were based on an incomplete picture.

“I have always denied the allegations made against me and I continue to do so,” he said in a statement.

“In addition, the findings were based on evidence that was not disclosed to me or my advisers. I therefore maintain that they were made in a manner which was unfair.”

Mohammed, 72, and Haya, 47, have been involved in a long, bitter and expensive custody battle since she fled to Britain with their two children, Jalila, 13, and Zayed, 9. She said she feared for her safety amid suspicions that she had had an affair with one of her British bodyguards.

Among those targeted by the hacking was Haya’s lawyer Fiona Shackleton, a member of Britain’s House of Lords who represented British heir-to-the-throne Prince Charles in his divorce from his late first wife Princess Diana. 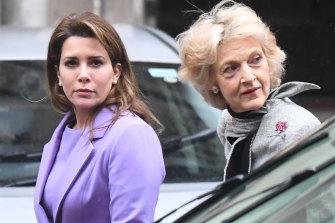 The activity came to light in August last year after Shackleton was urgently tipped off by Cherie Blair, the wife of former British prime minister Tony Blair, that she and Haya had been hacked, the court was told.

Blair is also a prominent lawyer who worked as an external adviser for NSO.

At the same time a cyber expert from the University of Toronto’s internet watchdog Citizen Lab, which researches digital surveillance, also alerted Haya’s lawyers after tracking the hacking, the court heard.

Once the hacking was uncovered, NSO cancelled its contract with the UAE, Haya’s lawyers said. The Israeli firm said it could not immediately comment on the case, but said it took action if it received evidence of misuse of Pegasus.

Mohammed is regarded as the visionary force behind Dubai’s ascent into a global commercial hub. He has sought to burnish the Gulf city’s reputation on issues such as human rights and equality.

There is no indication that last year’s ruling caused any major damage to him personally or to the UAE. Last month Britain and the UAE announced a “new, ambitious Partnership for the Future” involving billions of dollars in trade and investment.

Reporting restrictions on McFarlane’s findings after a year of hearings were lifted on Wednesday.

“I do not feel that I can move freely forward as things stand now, while I am and feel hunted all the time, and I am forced to look over my shoulder at every moment of the day,” the British-educated princess said in one witness statement.

The legal costs of the case have run into millions of pounds, with the case involving some of Britain’s most prominent lawyers. The costs of one appeal alone was cited by the court as costing £2.5 million ($4.68 million).

The sheikh, who is Vice-President and Prime Minister of the United Arab Emirates, initially sought to have the children brought back to Dubai, but has since suffered repeated defeats in the English courts.

In a judgment released on Wednesday, McFarlane ruled that the children should live with their mother.

In a ruling published last March, the judge concluded that Mohammed had subjected Haya to a campaign of intimidation which made her fear for her life.

He concluded the sheikh had arranged for his daughter Shamsa, then aged 18, to be kidnapped in 2000 off the streets of Cambridge in central England and flown back to Dubai.

The judge also found it was proved that Mohammed had arranged for Shamsa’s younger sister Latifa to be snatched from a boat in international waters off India by Indian forces in 2018 and returned to the emirate.

While his findings do not amount to a determination of criminal guilt, they mean McFarlane is satisfied the allegations are proven on the balance of probabilities and that this may impact arrangements for contact with his children in the future.

“As the previous findings of fact establish, the father, who is the head of government of the UAE, is prepared to use the arm of the state to achieve what he regards as right,” he said.

“He has harassed and intimidated the mother both before her departure to England and since. He is prepared to countenance those acting on his behalf doing so unlawfully within the UK.”

Haya’s lawyers told the court that the British Foreign Office had been made aware of the hacking allegations, and police had expressed a desire to interview Haya and her lawyers as victims. Reuters was unable to establish if this took place.

There was no immediate comment from the foreign ministry or the police.

It is not the first time the UAE’s cyber activities have come under scrutiny. Last month, three former US intelligence operatives, who worked as UAE cyber spies, admitted to violating US hacking laws to spy on human rights activists, journalists and rival governments.

During the London hearings, Mohammed’s high-powered team of lawyers battled for months to prevent the court from considering the hacking allegations, by saying it did not have the jurisdiction and that he had immunity, and then by trying to persuade the judge that the sheikh was not responsible.

Saudi Arabia and Jordan were among a host of other countries that could have been behind it, his legal team said.

McFarlane dismissed those suggestions, saying the idea it could be Jordan was “so insubstantial as to be without consequence.”

Instead of showing any concern for the safety of the mother of his children, “he has marshalled a formidable forensic team to challenge the findings sought by the mother and to fight the case against her on every point”.

McFarlane concluded, and the Court of Appeal agreed, that the sheikh had authorised the hacking of six phones which took place between July and August 2020 when a vulnerability in Apple’s iPhone systems was exploited.

Expert cyber analysis revealed that on one occasion 265 megabytes of data was uploaded from Haya’s phone, the equivalent of 24 hours of voice recording or 500 photos.

Exactly how much data and what information was taken from her and the other phones has not been determined.

Haya and Mohammed have been fixtures in British high society for decades and both are on friendly terms with members of the British royal family, including Queen Elizabeth.

The sheikh, through the Godolphin stable which he founded, is a major player and investor in the British horse racing industry. His horse Adayar won this year’s famous Epsom Derby flat race.

McFarlane also extended the provisions of a previous non-molestation order, which banned the sheikh from buying any land or property near her estate in rural Berkshire, west of London, after his agents tried to buy an adjoining £30 million mansion which overlooked her home.

“It feels like the walls are closing in on me, that I cannot protect the children and that we are not safe anywhere,” Haya told McFarlane in a statement. “I feel like I cannot breathe anymore; it feels like being suffocated.”