‘The Tommies are my brothers’: Unseen diaries of German soldiers recounting the WWI Christmas Day truce in 1914 shed new light on ceasefire as they write about exchanging gifts and singing ‘beautiful’ carols

Previously unseen German accounts of the First World War’s Christmas Day truce have come to light over 100 years on.

British historian Anthony Richards has pored over hundreds of German diaries from the First World War to shed new light on the temporary ceasefire in 1914.

The fascinating accounts include one by a soldier who described the truce as a ‘miracle’ and called the British Tommies his ‘brothers’.

Another wrote of how the two warring sides treated each other as human beings, exchanged gifts and sang ‘beautiful’ Christmas carols.

But the truce did not sit easy with some of the German officers who were concerned about the affect befriending the enemy would have on the men.

One officer wrote how he was torn between rejoicing at the moment of mutual peace and being appalled at the fraternisation with the enemy.

The variety of accounts, which are both amusing and poignant, feature in Mr Richards’ new book, The True Story of the Christmas Truce. 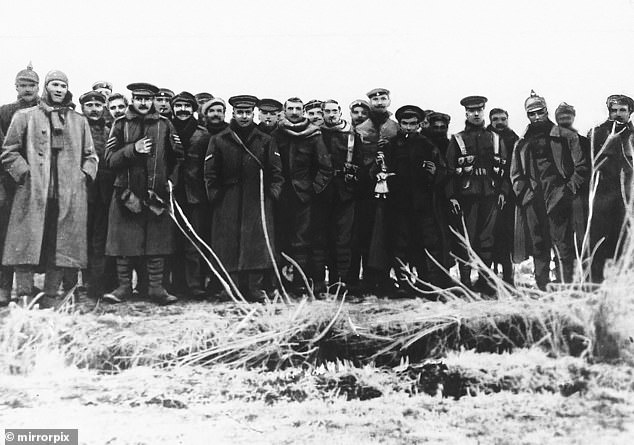 The author said he wanted to write a book which analysed the truce from a German perspective, while tackling some ‘myths and inaccuracies’ about what took place. 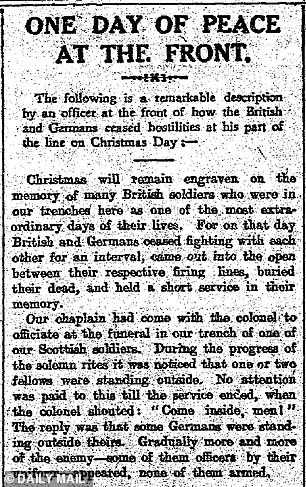 He said: ‘Now that none of the original combatants from the First World War are alive, we rely more than ever on those invaluable written and recorded experiences. 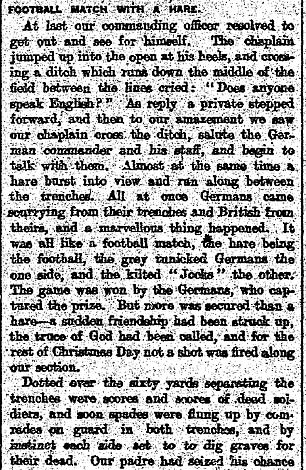 Part of the Daily Mail’s account of the truce

‘For these reasons, the main encouragement for me to write this book lay in the fresh availability of a wealth of rarely seen German accounts of the Christmas Truce, many never before translated into English and some not previously published.

‘The story of the truce has traditionally been a very British-centric one, but for the first time we can begin to look more at the event as a shared experience between two opposing sides.’

One account is from Lieutenant Fritz Jung, of the 10th Jager Battalion, who recounted hearing Christmas carols sung in the trenches.

He described walking around ‘without a fear in the world’ knowing they were not going to be targeted by British snipers.

He wrote: ‘All of a sudden, towards 4am we could hear music ringing through the early morning, floating in from the Saxon trench where they had formed a band that was playing the most beautiful Christmas carols.

‘Each song was received with loud shouts of ‘Hurrah!’ coming from the English side.

‘There too it eventually quietened down, dawn broke and all around us was peaceful.

‘We could take walks outside without a worry in the world and for the first time we were able actually to roam around the area, taking it all in, while usually we weren’t allowed even for a moment to put our head above the parapet for fear of being targeted by English sharpshooters.

‘We also used the time to fix our parapet and anything else which needed mending.

‘Tommy on the other side did the same. Above all we needed to bury the dead who were still lying in the field.’

Another German soldier described the occasion as ‘miraculous’ as they waved at each other and exchanged gifts ‘as if they had been brothers’. 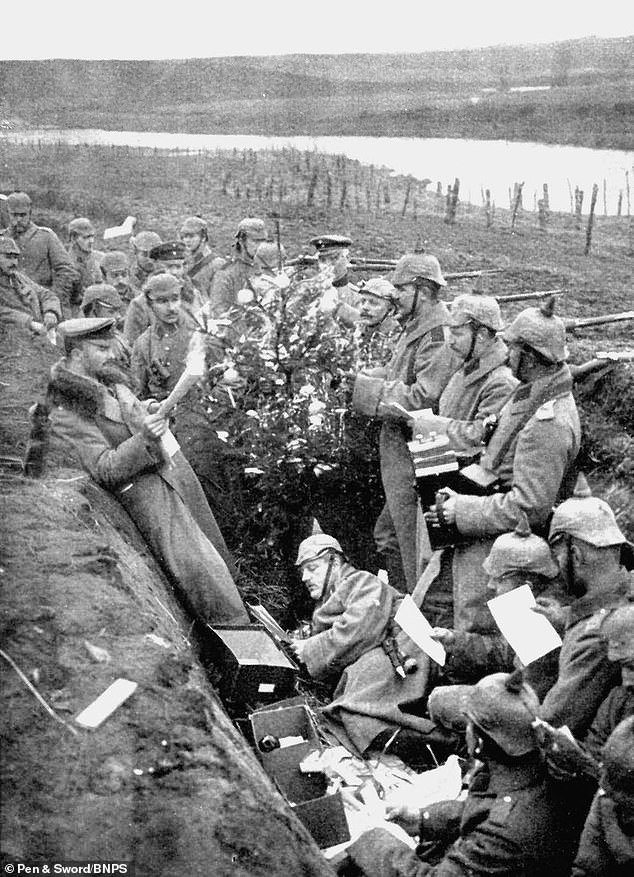 British historian Anthony Richards has pored over hundreds of German diaries from the First World War to shed new light on the temporary ceasefire in 1914. The fascinating accounts include one by a soldier who described the truce as a ‘miracle’ and called the British Tommies his ‘brothers’. Pictured: German soldiers singing carols in their trench next to a Christmas Tree 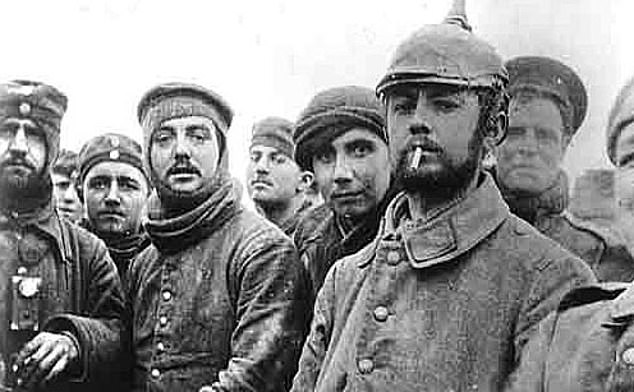 Rubert Frey, of the 16th Reserve Infantry Regiment, wrote: ‘It was miraculous! These were Englishmen, English soldiers of whose existence we only knew based on their iron-wrapped missives, and now, here we were face-to-face.

‘The two of us who had been lying opposite each other gun in hand were now waving to each other, exchanging gifts as if we had been friends, brothers even!

‘Well, indeed, isn’t that precisely what we were! At that moment we were friends, no longer German and English – we were human beings!’

However, the German superiors, like their British counterparts, felt very uneasy by the break in fighting as they feared it could cause their men to ‘lose their killer edge’. 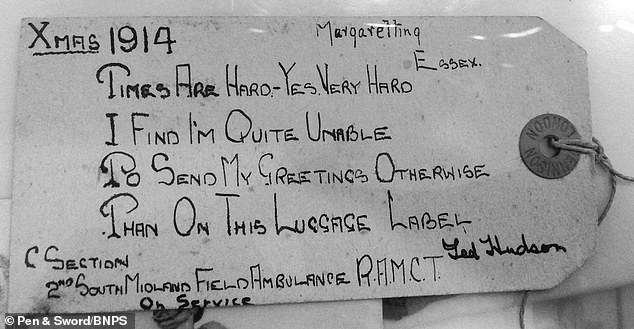 Soldiers at the front would use whatever means they could to get a message home to their loved ones. This British soldier chose to send home an annotated luggage label as a novel souvenir 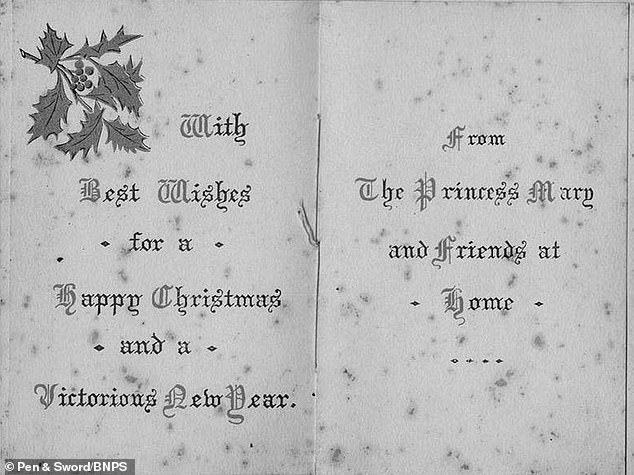 Around 400,000 gift boxes such as this were distributed to the British troops at Christmas 1914 on behalf of Princess Mary 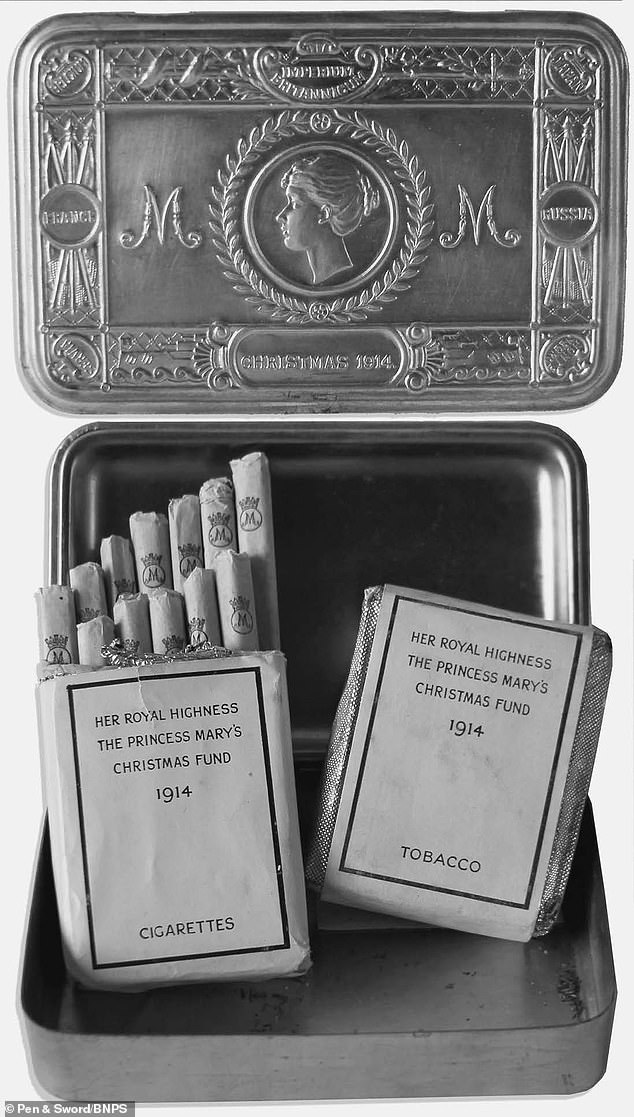 Around 400,000 gift boxes such as this were distributed to the British troops at Christmas 1914 on behalf of Princess Mary

German officer Otto Hahn wrote: ‘The question remains whether one should rejoice or be appalled.

‘I myself am really and profoundly happy about this peace lasting one day.

‘For effect, I make it crystal clear to the men that such a thing is not allowed, not even for the one Christmas Day. It is too dangerous, I say, etc. etc.

‘But deep inside me, I think it is beautiful. But yes, lucky that they are being replaced.

‘It would be hard to shoot at people, or knock them dead with our rifle butts, or pierce their bodies, if one had exchanged cigarettes and food items with them just before. 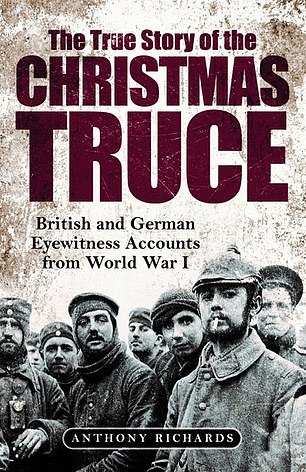 The True Story of the Christmas Truce, by Anthony Richards, was published on September 1

‘So, this is not what is allowed to happen. Yet, this is what the mood is like around here, and here perhaps it is shown more clearly than elsewhere * so, feelings have to be suppressed.’

In his following entry, he revealed it was ‘business as usual’ on Boxing Day as both sides peppered each other with shell fire and a grenade exploded near him.

He writes: ‘For some time our artillery has made it quite clear, and openly so, that this ‘Christmas Peace’ of ours has come to an end.

‘Heavy weapons are being deployed in close proximity to my quarters, with my windows rattling from the impact.

‘I suspect that this is being done under orders to make it obvious to everyone that the truce is now over for good.

‘Looks to me like the enemy has also returned to his routine and all seems to be back to apple-pie order.

‘Boom, this very second a grenade has exploded just nearby, proving that all is running according to plan.’

The True Story of the Christmas Truce, by Anthony Richards, was published by Pen & Sword on September 1 and costs £20.