London: COVID-19 case numbers are falling in some areas outside of London and all parts of England are showing signs of nearing their peak, data show.

Official National Health Service (NHS) records show that as of January 8, new case numbers were beginning to fall in the south-east and the east of England, as well as in London, where they peaked before Christmas. Cases are still increasing in all other regions, but at a much slower rate than before.

The number of people on mechanical ventilators in England has dropped to its lowest level since October, even though epidemiologists believe the number of new infections may have reached half a million per day. Daily figures for cases, hospitalisations and deaths have been disrupted by the Christmas period but are now beginning to return to normal. 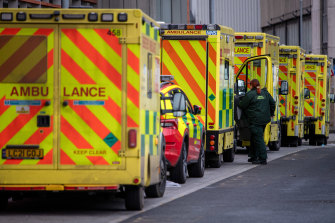 Ambulances queue up outside the Royal London Hospital on Friday.Credit:Bloomberg

Paul Hunter, professor of Medicine at the University of East Anglia and an adviser to the World Health Organisation (WHO), said medical appointments were often delayed over Christmas and rescheduled in the new year, causing a lull at the end of December and a spike in early January.

While he cautioned that this impacted the daily data, as did the lack of lateral flow tests, known in Australia as rapid antigen tests (RATs), he said case numbers seemed to be slowing nationwide.

“The sort of biases that you’d expect around people being less likely to go for testing over bank holidays would tend to underestimate the situation and make the apparent drop possibly even more dramatic than it appears,” he said. 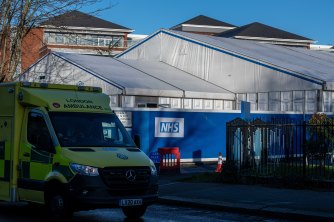 An ambulance passes a temporary structure, to be used as a surge hub for Omicron cases, in the grounds of St George’s Hospital in London.Credit:Bloomberg

“I think that it’s beginning to look quite hopeful – but we have been here in the past,” he said.

“The worst-case scenarios that were being talked about before Christmas by the SAGE [Scientific Advisory Group for Emergencies] modellers aren’t coming to pass, fortunately.

“In England we peaked at around 3800-4000 hospitalisations a day, on average, a year ago, but we will probably peak around 2000 this winter.”

Professor Sir David Spiegelhalter, the University of Cambridge statistician who has written a book on the pandemic, told Times Radio it was possible that hospital admissions would stay below 3000 a day – a figure set by SAGE as a key marker.

Overzealous models from December, when little was known about the Omicron variant, did not come about due to faulty science or doom-mongering experts, but because the variant was less deadly and less able to evade vaccines than was feared when the models were constructed.

For example, on Sunday it emerged that the Scottish government had received new modelling showing daily infections would peak at around 70,000 on Thursday or Friday this week before tumbling to around 20,000 by the end of the month.

This is far earlier than predictions made by Humza Yousaf, the Scottish health secretary, and Professor Jason Leitch, the national clinical director, who said the Omicron “tsunami” would not peak until late January or early February.

And while case numbers and hospitalisations showed signs of dropping, Hunter and Spiegelhalter believed vaccines were preventing intensive care wards and, therefore, NHS as a whole, being overwhelmed.

As of Saturday, 708 people in England needed mechanical ventilation, the least since October 18. A year ago, more than 3000 people were on ventilators.

“The reduction in [occupied] intensive care unit beds will have a greater impact on workload than case numbers dropping,” Hunter said.

“People in desperate need of a major operations, whether it be brain tumour, coronary artery bypass grafts, cancer surgery… go into intensive care units for a short while before they can go back to the open ward.

“If all those beds are occupied by people with COVID then you can’t do the heroic surgery.

“If if this fall in mechanical ventilation bed occupancy continues, that would be a huge reduction in work demands for nurses and doctors, but also it would… free up beds so we could go back to doing surgery on people with the most desperate need but [who] can’t have it done at the moment because of a lack of access to ventilation beds.”

As fewer COVID patients need ventilation, there are fewer people in critical care beds in England than at the same time in any of the previous five years.

On January 2, 25 per cent of critical care beds in England were available compared to 20 per cent on January 2 last year. In 2018, during a bad flu season, 12 per cent were unoccupied, official NHS data show.