The extraordinary court sketches that captured Ghislaine Maxwell’s camera-free trial: The prison frump to glam bob makeover, the bizarre moment Maxwell began sketching the sketch artist and her cold, hard stare as she was found guilty

Ghislaine Maxwell’s trial was dominated by powerful images: of her and Jeffrey Epstein, their luxury lifestyle, and their famous friends.

Yet the only images that actually emerged of the courtroom were sketches, with cameras banned from the court.

Maxwell faced six federal charges related to sex trafficking of minors, and on Wednesday was found guilty of five.

The courtroom sketch artists captured Maxwell looking decidedly more glamorous and composed during the trial than in the hearings that led up to the case – the result of a pre-trial jailhouse makeover.

They showed her with a cold hard stare as the verdict was read out – and even sketching the artist herself. 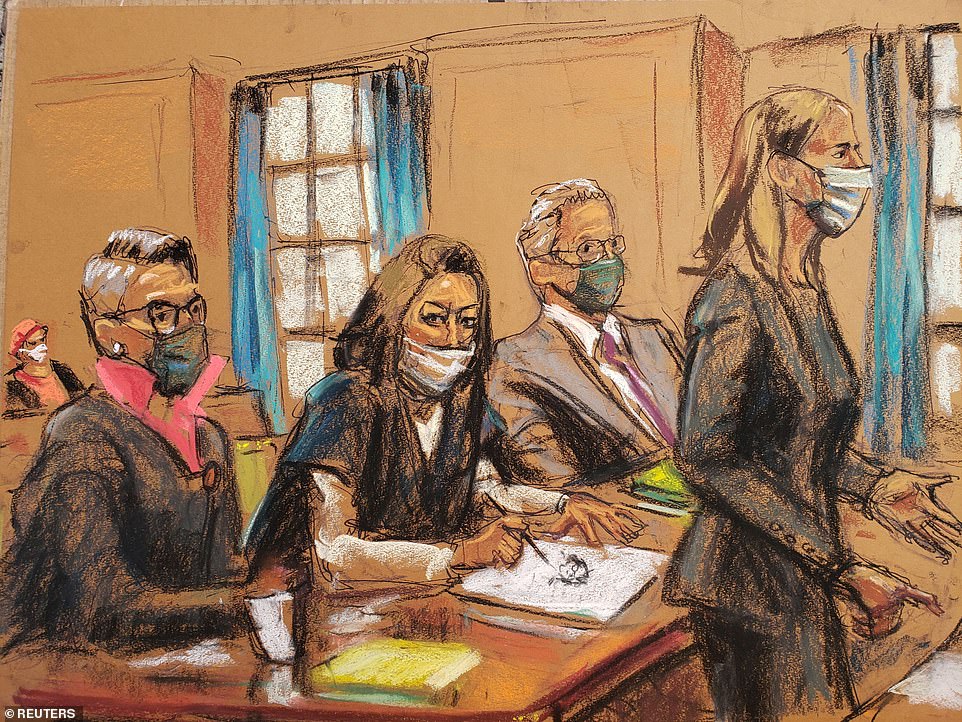 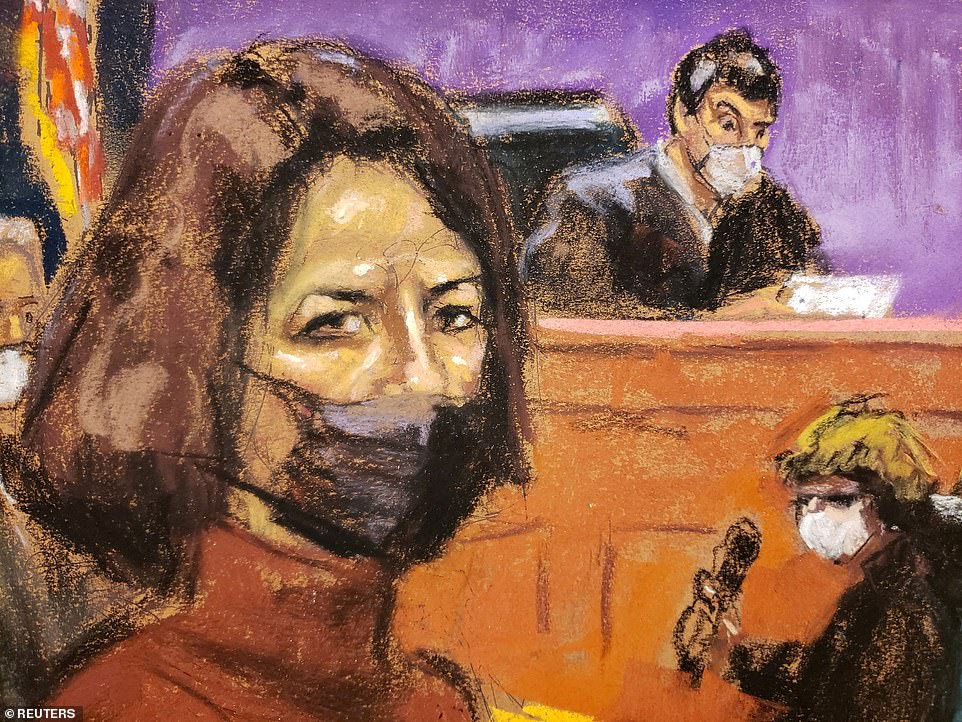 Maxwell is seen on Wednesday as the verdict is read out, looking shocked but steely beneath her face mask 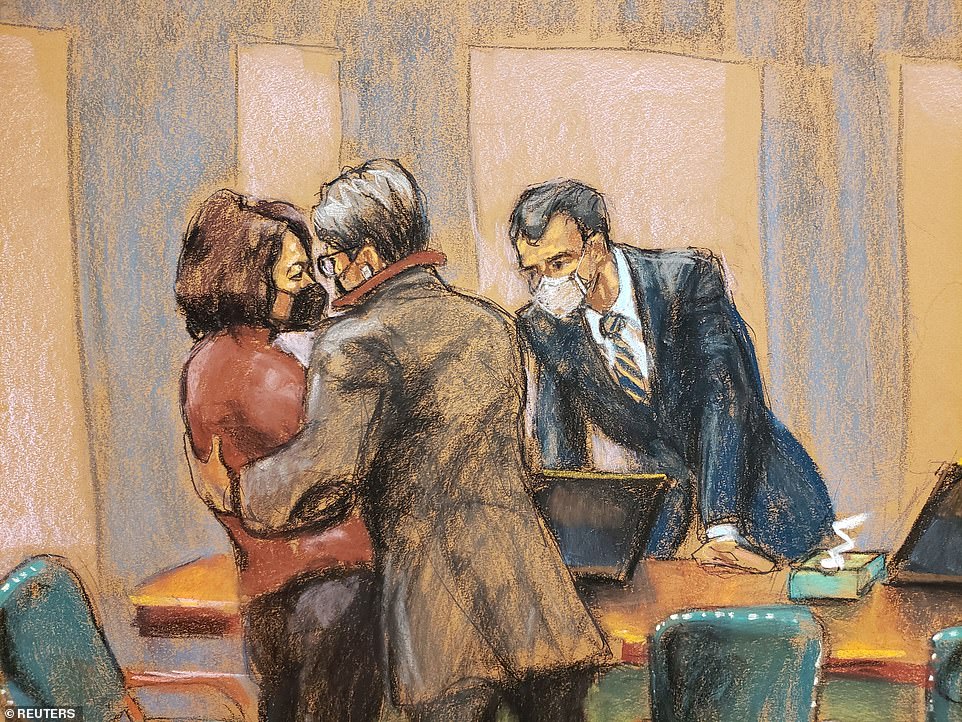 Maxwell is comforted by her lawyers, Bobbi Sternheim and Christian Everdell, on Wednesday after the verdict was read out

Camera have been banned from federal courts since 1946; in 1972 the ban was expanded to include televised images.

Despite repeated requests by broadcasters, the Judicial Conference of the United States, which establishes policy for the federal courts, has refused to reconsider its rules prohibiting television and radio broadcasting from federal trials. 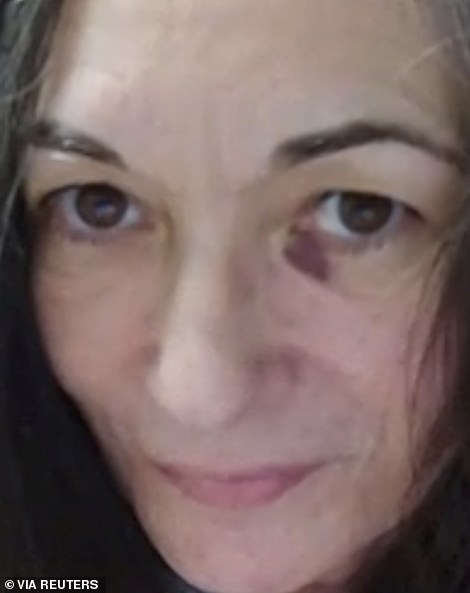 Ghislaine Maxwell is seen in a photo submitted by her lawyer in April, with a black eye – which they argued showed she was being abused in jail

By contrast, many states allow cameras into the courtroom whenever the trial judge deems it appropriate, or, in some cases, when participants agree.

Maxwell, who was arrested in July 2020, has not been publicly photographed since an August 2019 picture was published by The New York Post, showing the British socialite at an In N Out Burger in Los Angeles.

The picture – the first of Maxwell in three years – immediately raised eyebrows and is now widely believed to have been staged and photoshopped.

In April this year Maxwell’s lawyers released a photo of her with a black eye, which they said was the result of maltreatment in jail, and greying hair.

In November Maxwell appeared haggard as she was ushered into court in prison uniform, in handcuffs.

Yet when the first court sketches emerged from opening statements on November 29, Maxwell was seen with freshly-dyed brown hair, cut into a bob.

She was wearing her own clothes, and frequently opted for turtleneck jumpers, tailored pants and high heels – a strikingly different image. 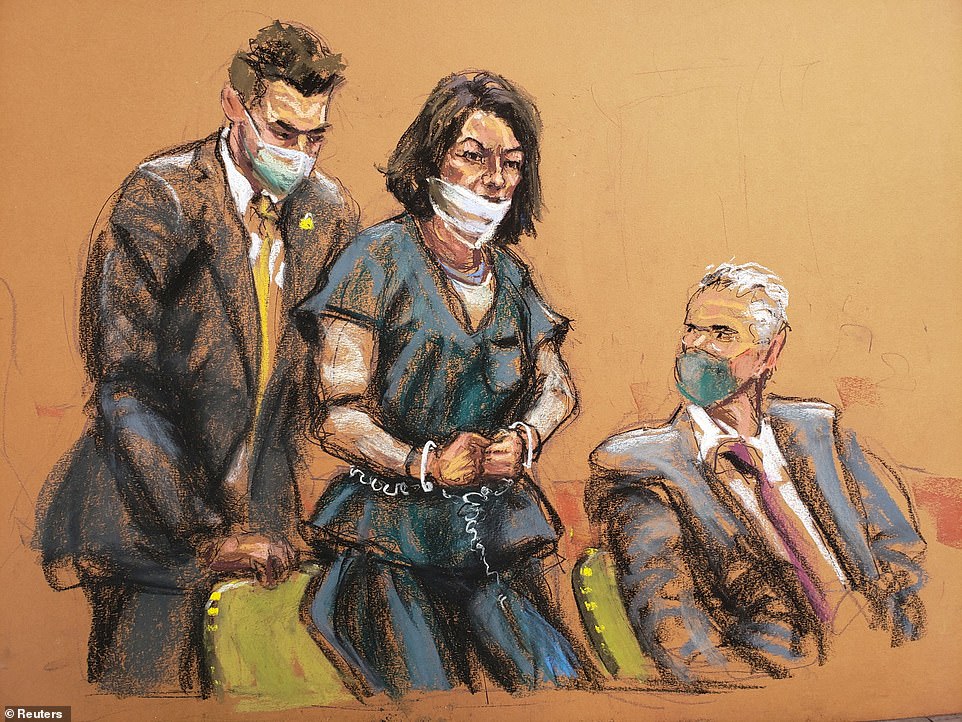 Maxwell is seen handcuffed and led into court for a pre-trial hearing on November 1. When the trial began, she wore her own clothes and had dyed her hair brown 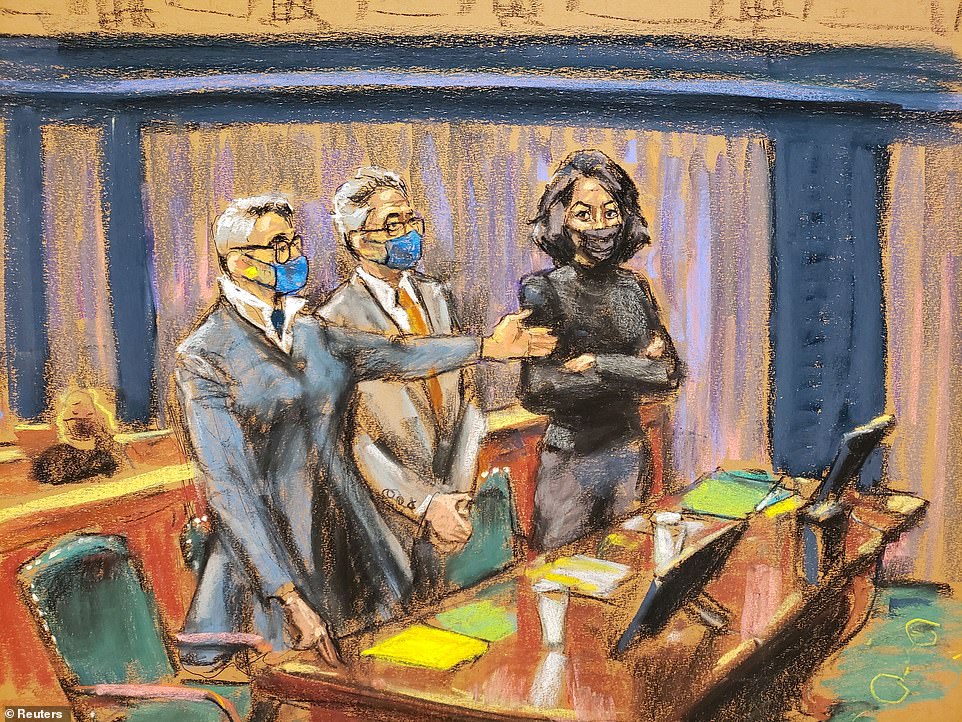 In tailored pants and a black turtleneck, Maxwell stands besides her lawyers on November 23 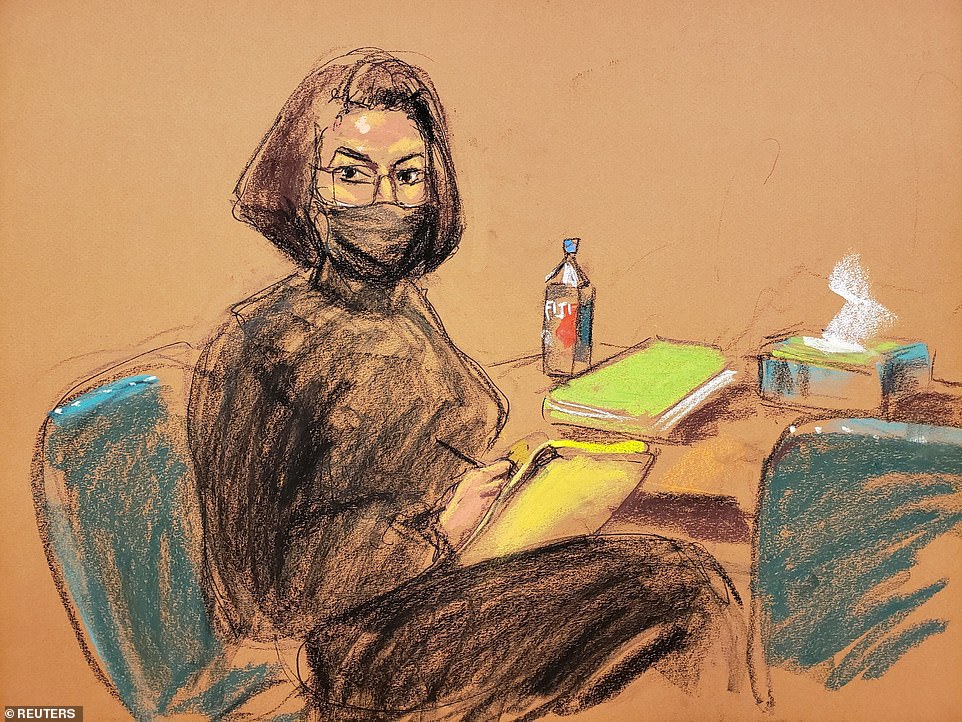 Maxwell is seen on December 7, once again sketching the courtroom artist – with her bottle of Fiji water on the desk 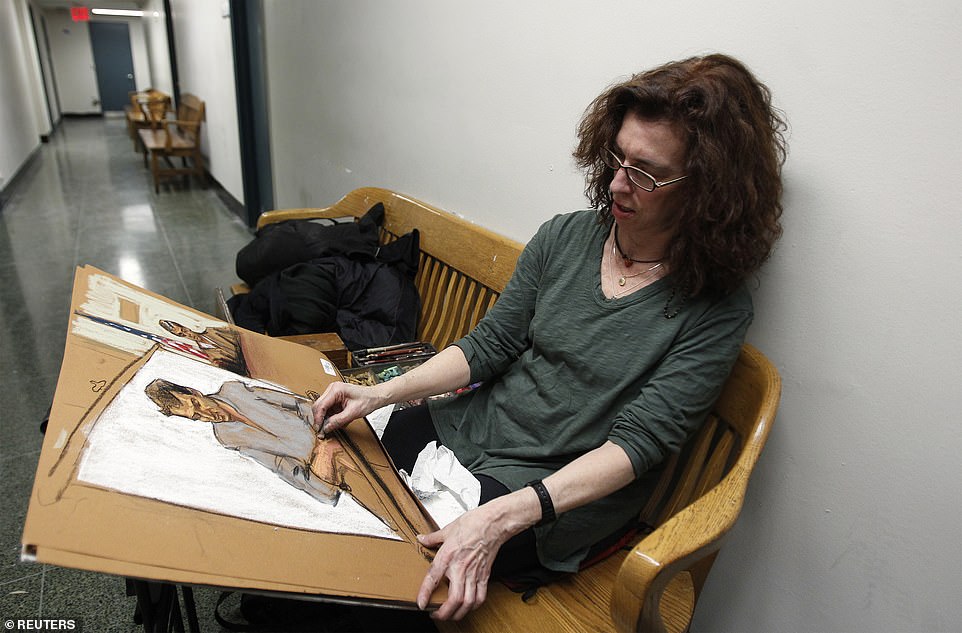 Jane Rosenberg is seen outside a courtroom, finishing off a sketch, in a previous trial 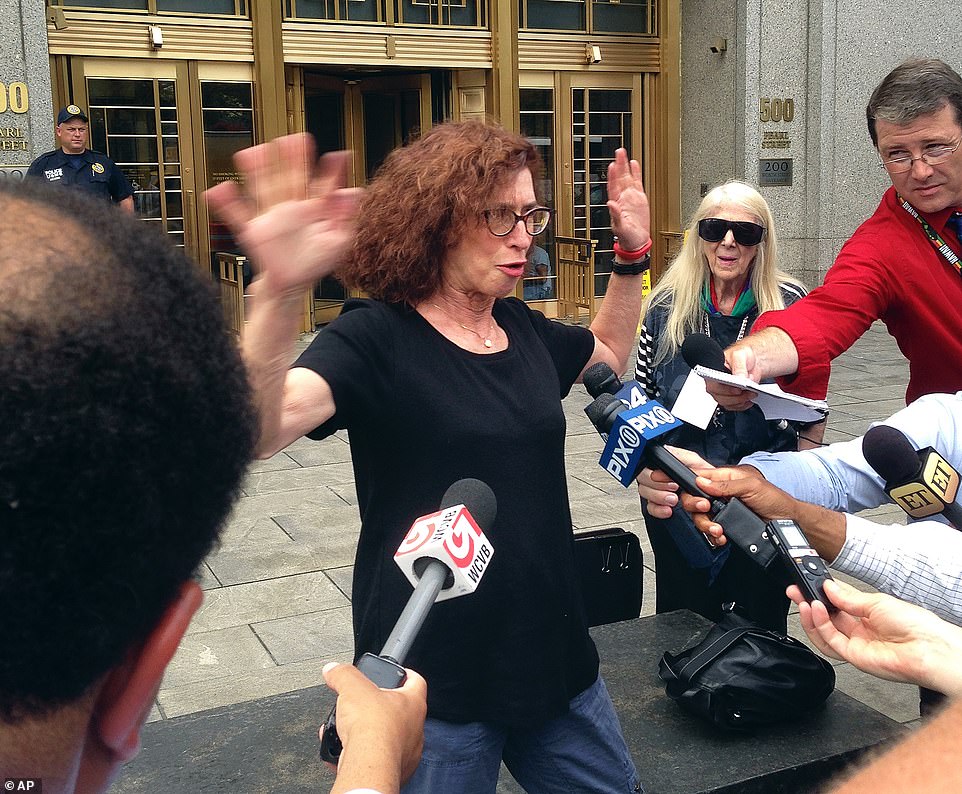 Rosenberg is seen in 2015, having drawn Tom Brady in court during the ‘Deflategate’ trial 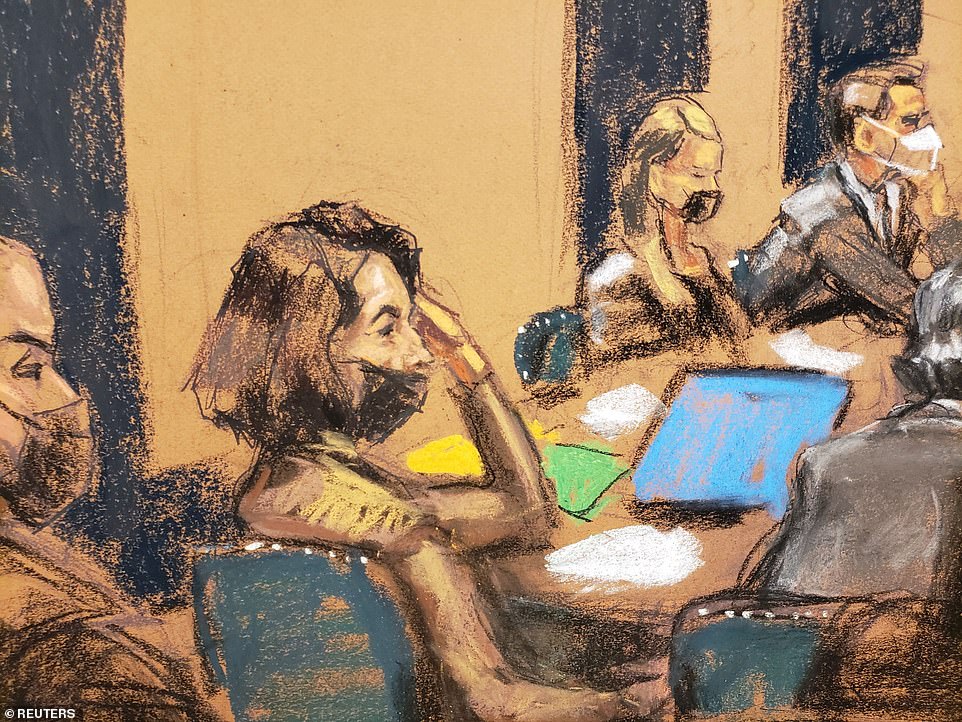 Maxwell is seen on December 10, listening to proceedings 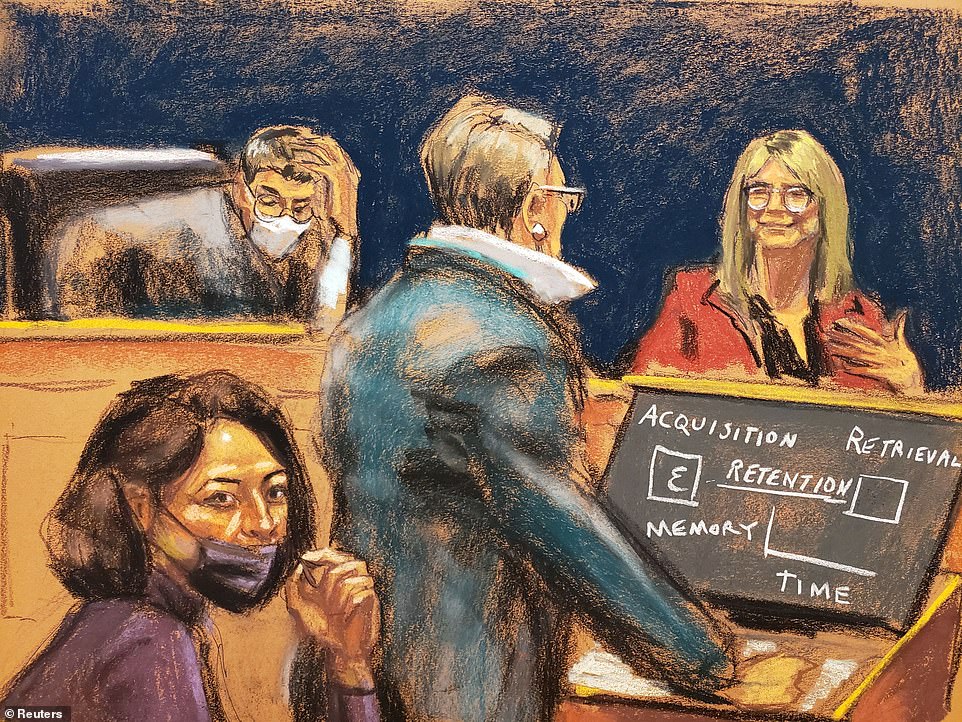 Maxwell is seen on December 16, listening in as her attorney, Bobbi Sternheim, cross-examined Elizabeth Loftus – who testified about false memory 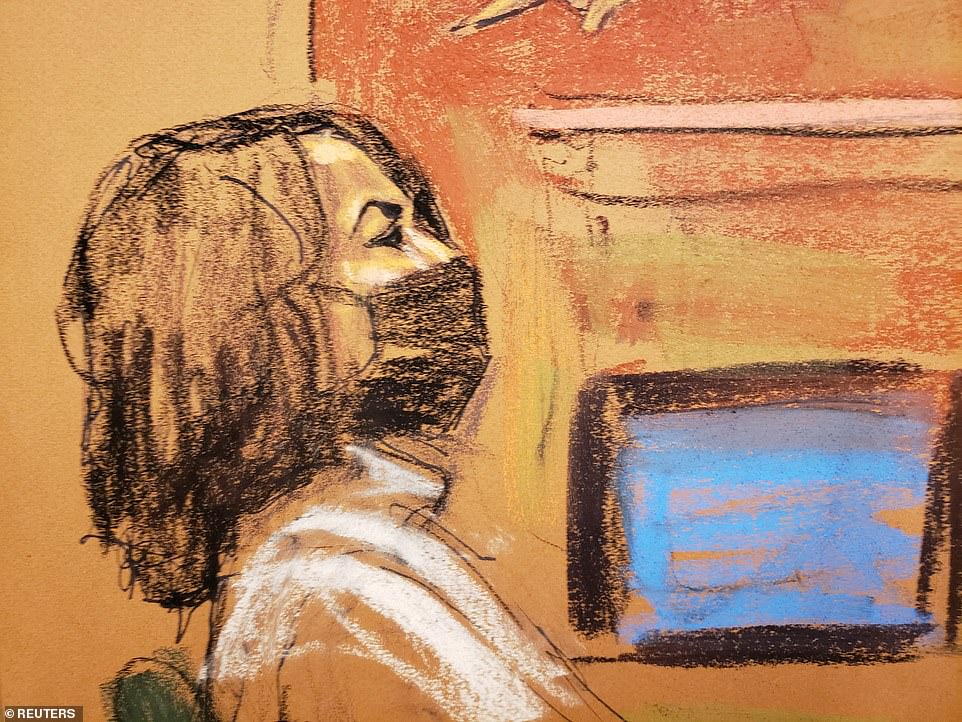 Maxwell is seen in a white polo neck jumper on December 20, listening to proceedings 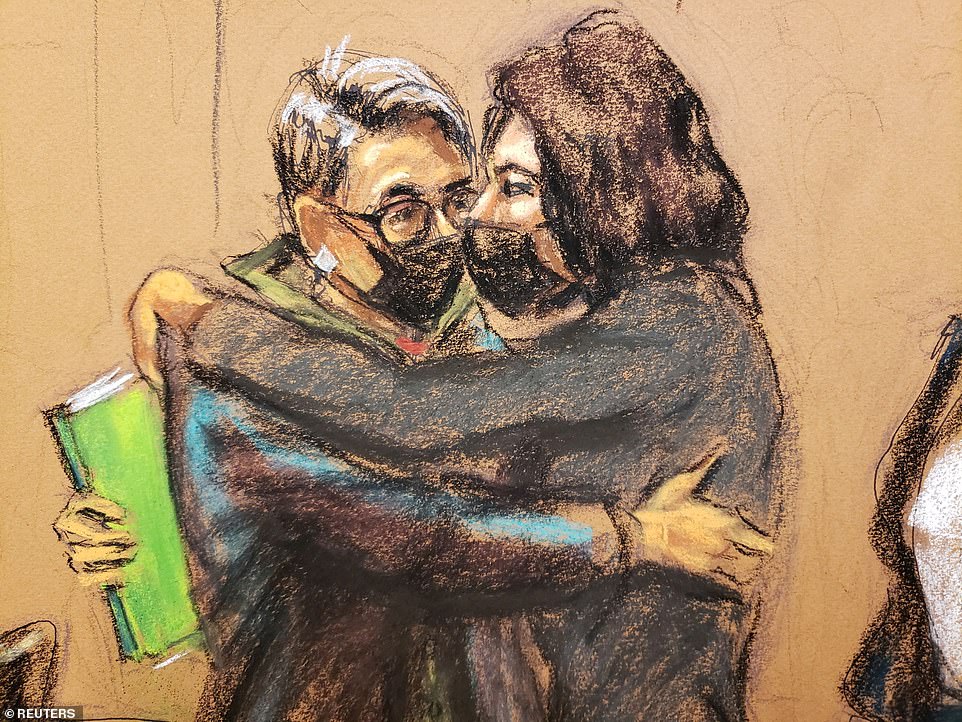 Maxwell on December 21 is seen hugging her attorney Bobbi Sternheim, during jury deliberations 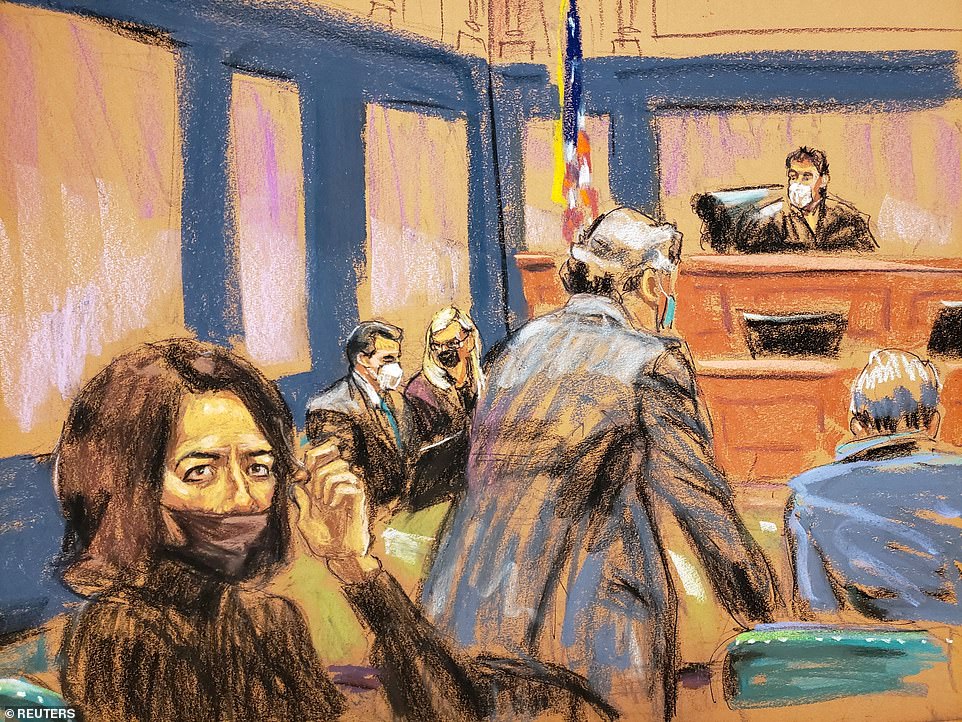 Maxwell is seen on December 21, toying with her hair, as the court hears a note from the jury during deliberations 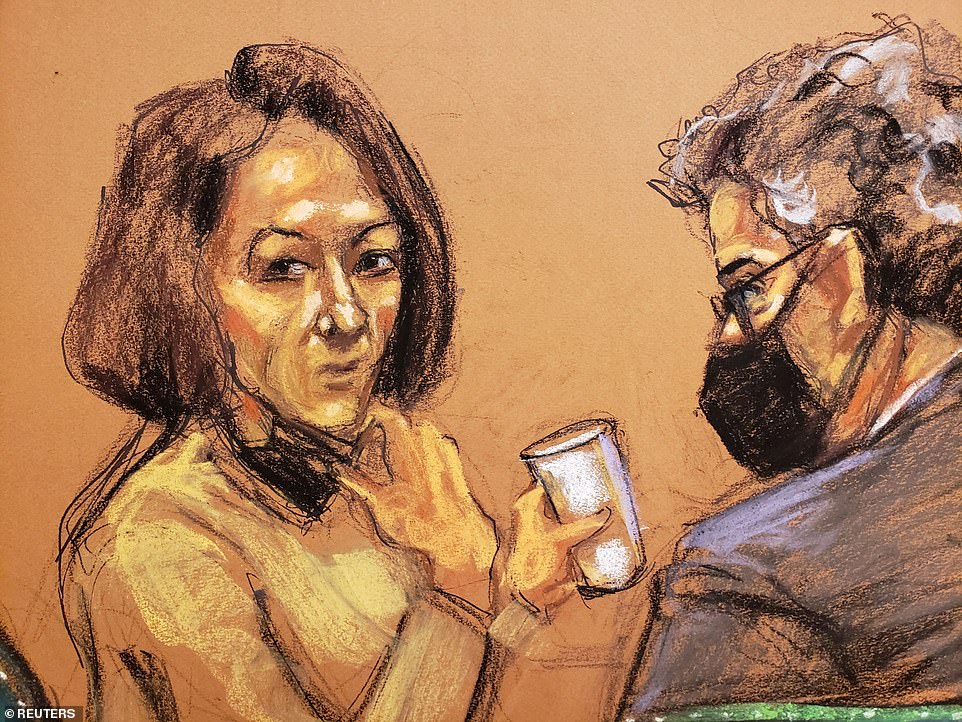 As jury deliberations resumed on December 27, following the Christmas break, Maxwell is seen sipping from a cup of water 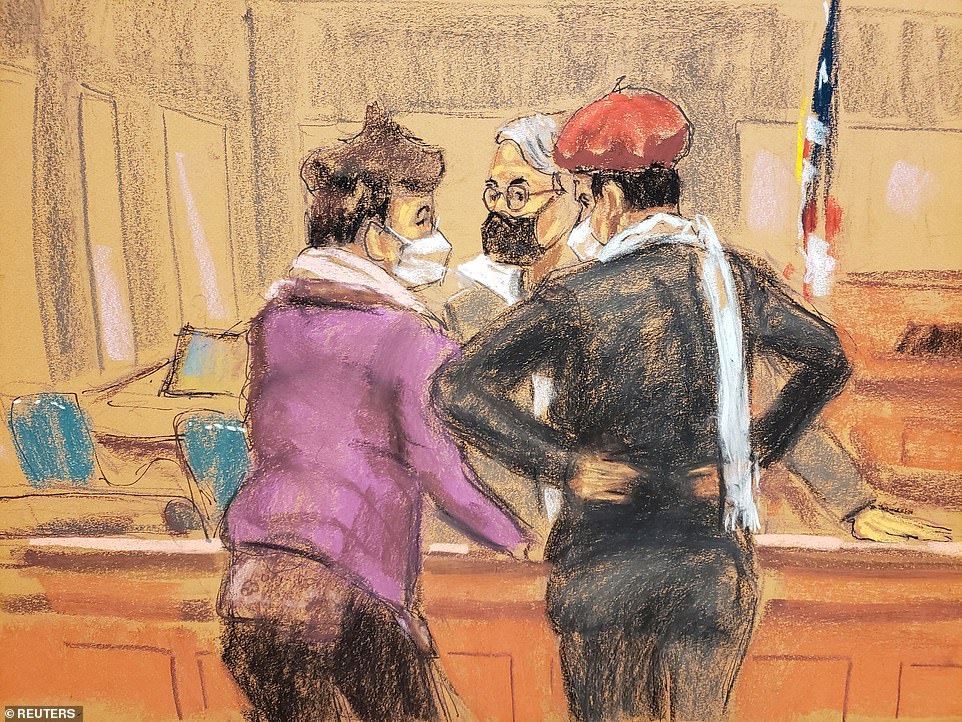 The court sketches then became a source of fascination.

Maxwell at one point even sketched the court artist, Jane Rosenberg.

Rosenberg, who has spent more than 40 years as a professional courtroom sketch artist, was asked by The Guardian whether she thought Maxwell was trying to send a message.

‘I don’t know, and I’m not going to try to read her mind,’ Rosenberg said.

‘Maybe she was just bored coming out of her jail cell. I know her sister sometimes also sketches in court.

‘Maybe the Maxwell family just likes to sketch in their free time.’

Rosenberg’s sketches captured moments of high drama – such as when one of the four women testifying against Maxwell, known only as Jane, burst into tears while testifying.

Maxwell’s lawyer, Laura Menninger, used the moment to point out that Jane now worked as an actress.

‘You are an actor who convincingly portrays someone else for a living,’ the lawyer stated. ‘You are able to cry on command.’

When, the following week, another of the four women – Carolyn – broke down in tears, Rosenberg captured the moment. 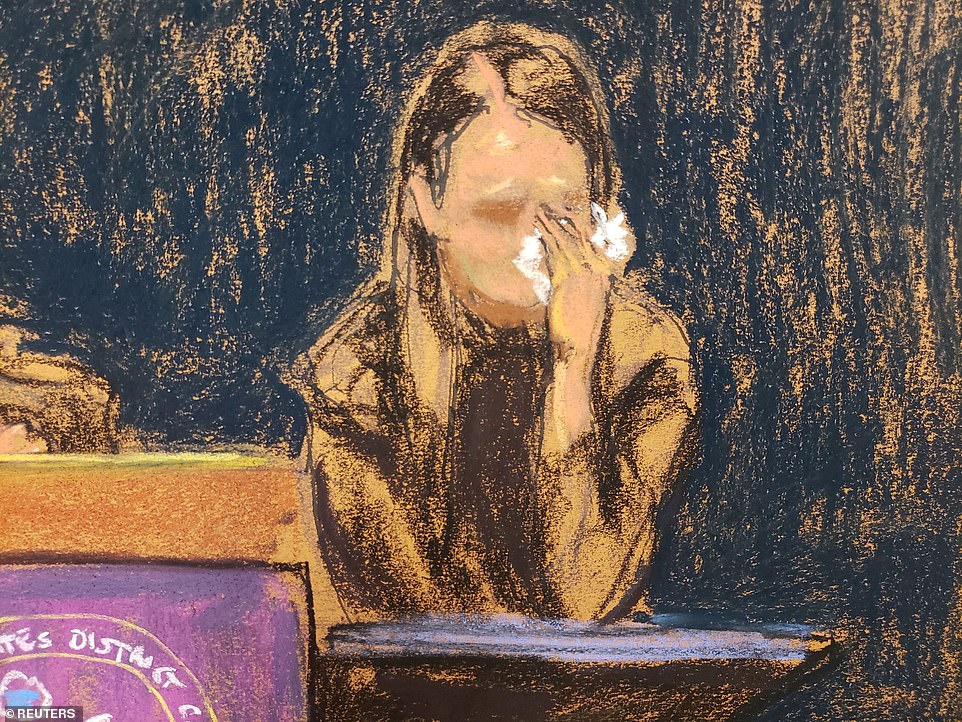 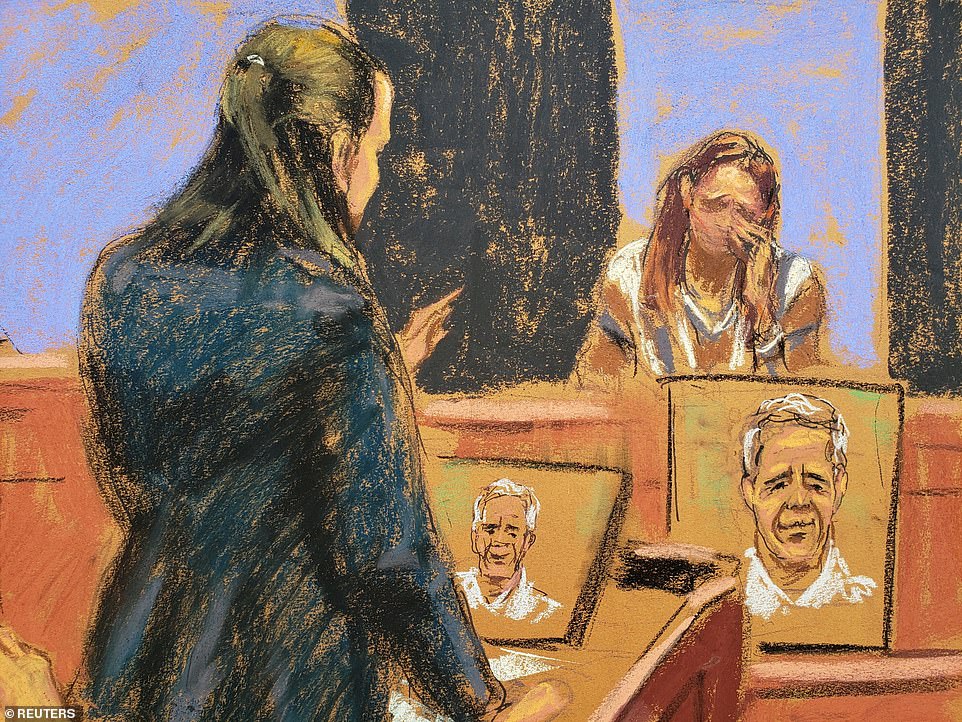 Rosenberg captured the moment that ‘Carolyn’ broke down in tears, on December 7 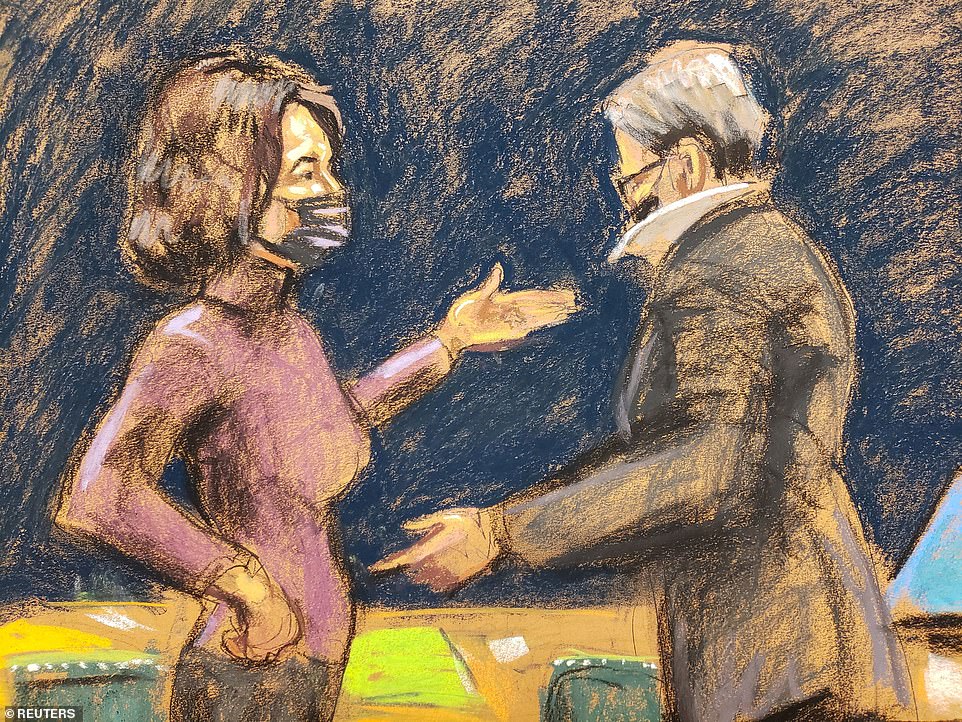 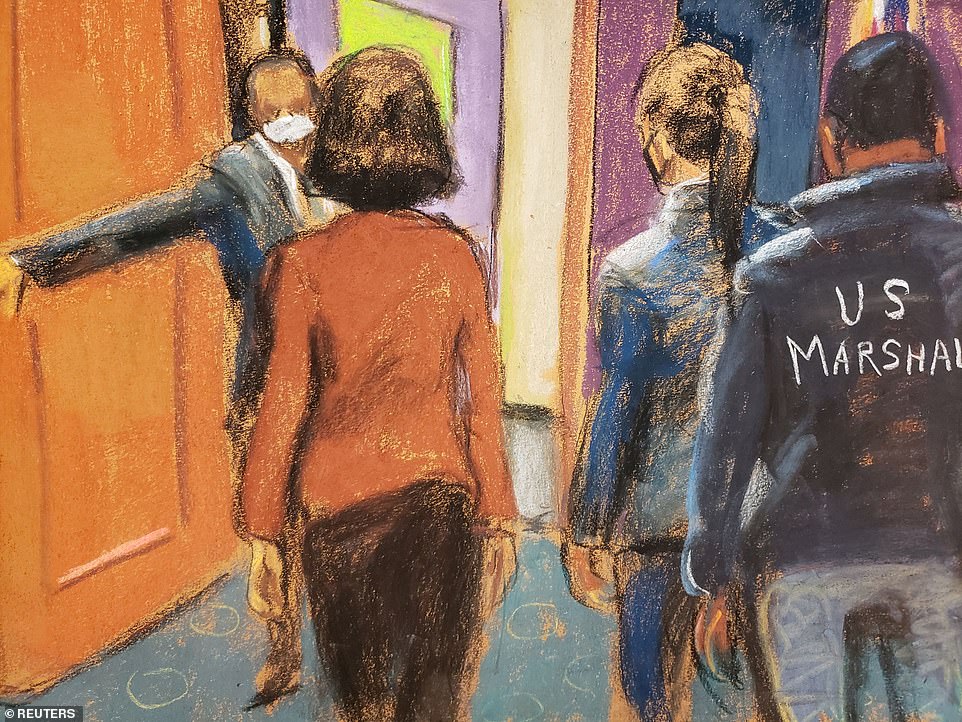 U.S. marshals escort Maxwell out of court on December 29, after she was pronounced guilty

Rosenberg also captured more mundane moments, which were equally revealing – Maxwell chatting with her beret-wearing sister, Isabel, 72, or hugging her lawyers at the end of every day.

When Wednesday’s verdict was read out, Rosenberg captured Maxwell looking stunned beneath her black face mask.

Rosenberg is a familiar face in New York’s courtrooms, and has sketched everyone from Harvey Weinstein and Joaquin ‘El Chapo’ Guzman to Steve Bannon and John Gotti – who asked her to get rid of his double chin.

‘Since I became a courtroom artist, I’ve always thought cameras are going to be in court any minute,’ she told the paper.

‘However, it didn’t hold true in all New York state cases.’

Rosenberg said that seeing and hearing of so much pain and trauma in courtrooms can be distressing.

‘I try not to have emotion, because tears falling on my pastels is not good. But I hear horrific things a lot, and I’ve seen a lot of crime scene photos,’ she said.

‘Sometimes it gets to me, even when I’ve tried to be neutral.

‘My life is weird, I guess. Forty-one years of seeing bad guys and bad things happen.’