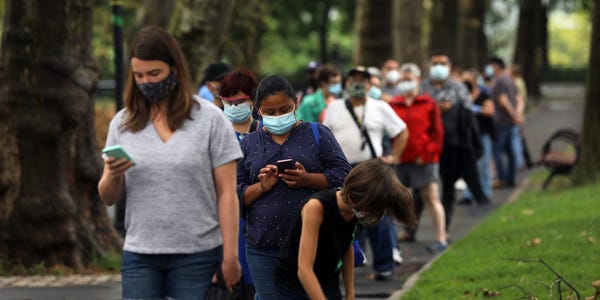 When Sue Nagata fell ill over the July 4th weekend, she immediately suspected COVID-19 and took two different coronavirus tests. One delivered her negative results in less than two hours — the other took 20 days.

Nagata told Insider she was concerned the rapid coronavirus test results weren't as accurate as other tests, and that her doctor's office suggested she take a new test to make sure she was, indeed, negative.

Nagata was more worried about returning to work without an accurate result. Her doctor's note excused her for only seven days, and she wanted to be absolutely sure she was negative before returning to her job at a busy mess hall at Camp Lejeune, a military base in North Carolina.

Nagata said luckily her employer accepted the results of the rapid test and authorized her to return to work on July 14. But when Nagata eventually received her second round of negative test results, she grew infuriated.

"I says, '20 days later you're telling me I'm negative? Do you know how dangerous that is if I had been positive and I got sent back to work after seven days?'" Nagata told Insider in September. "I thought it was absolutely stupid to even give out the three-to-five-day test if it's going to take that long, seeing as how they're testing for something that's highly contagious."

Those delays have an impact on the country's ability to contain the spread of the coronavirus, especially as students return to school en masse and increasing numbers of Americans go back to work.

Experts have emphasized that the ideal turnaround period for COVID-19 testing should be hours, not days.

A recent nationwide survey of 19,000 US residents found that the average wait time for test results in July was roughly four days, and up to 10% of people are waiting at least 10 days for their results.

"Given the timing of how quickly and how long someone is infectious, speed in producing reliable enough results is of the essence for COVID-19," the research paper said. "For COVID-19, peak asymptomatic contagiousness for many people may only be a week, which means that a week-long delay would render a positive test nearly useless to prevent further transmission."

The testing delays were also more than just a minor convenience, according to the people Insider interviewed. The delays resulted in confusion over when and if they could return to work, and whether they should seek treatment for their symptoms.

For Barbara Harris Griffin, a 67-year-old Baltimore woman, her test was so extensively delayed that by the time she received her results, she had already been hospitalized for COVID-19, and was placed on a ventilator not long after that.

Griffin died on July 16 of complications from the virus, her daughter, Kameka Parker, told Insider.

The mother of 12 had gotten tested early in June, and didn't receive her results until roughly four weeks later. Parker told Insider that had her mother received her positive test results sooner, she would have sought treatment sooner.

"It could have been treated before her lungs actually got too weak for anything. I just don't understand," Parker said.

For Kevin Rutkowski, it took roughly two weeks to learn the accurate results of his recent COVID-19 test.

The Milwaukee man was tested August 6 after his wife grew ill. Though she received her positive results within two days, Rutkowski got three different answers from three different government employees — one told him his results were positive, another said they were negative, and a third employee said his data was missing altogether.

It took a second test, which gave him results within a few days, before he learned he was actually negative.

The most troublesome part, Rutkowski told Insider, was that when he was initially told he was positive, he assumed he didn't have to distance himself from his contagious wife, who did have COVID-19. When he learned he was actually negative, he grew frustrated that the inaccurate information had caused him to let his guard down.

"It just keeps you in this kind of quiet anxiety. I don't know how else to explain it," Rutkowski told Insider, calling the experience "a s—show."

Nagata, the North Carolina mess hall worker, told Insider she was told her results took so long because they were sent to Virginia after North Carolina's testing facilities grew backlogged.

She said she was appalled that even after months of the coronavirus pandemic, testing facilities still haven't figured out a surefire way to get accurate results to people efficiently.

She said she wished she hadn't relied on a test with a three-to-five-day turnaround to give her answers, and said if she needs to get tested again, she'll stick with the rapid coronavirus tests.

"After my experience, I have no trust that I would get my results back in a timely fashion if I took a longer test. I just don't trust that anymore," she said. "At first they said, 'Oh yes, three to five days.' Then they said 10 days, and then it turned out to be 20. No. Never again. Ridiculous."

54 mins ago
We and our partners use cookies on this site to improve our service, perform analytics, personalize advertising, measure advertising performance, and remember website preferences.Ok