My epitaph should be: I did it all, I had it all! Blockbuster novelist Wilbur Smith, who has died at 88, lived a life as dramatic as any of his fictional heroes. He flew planes, shot lions, owned an island… and had four wives, writes CHRISTOPHER STEVENS

When he was eight years old, Wilbur Smith saw his father kill three man-eating lions. The animals attacked their safari camp at night and, woken by the screams of a guide, Herbert Smith grabbed a torch and his heavy rifle.

On the way out of his tent, Herbert lunged headfirst into the tent pole and smashed his nose open. Wilbur saw the gush of blood, and at the same moment realised his father was wearing only a pyjama top, and was naked from the waist down.

Then the lion charged. Herbert trained the torch beam on it with his left hand, raised the rifle with his right and shot from the waist, as if he was holding a pistol. He hit the lion in the chest.

Seconds later, he brought down the two lionesses. 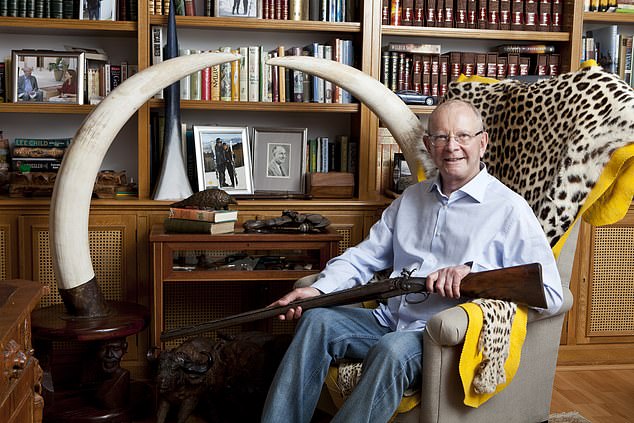 That scene is the essence of every bestseller ever written by Wilbur Smith, who has died aged 88: bloodshed, sexual virility, gunfire and slaughter in Africa.

He sold more than 120 million books worldwide, translated into 30 languages, before signing a deal in 2012 to work with ghostwriters, who produced a shelf-load more novels featuring his characters in plots he helped to invent.

A number of his stories were turned into Hollywood blockbusters, including Gold and Shout At The Devil, both starring Roger Moore, and The Mercenaries with Rod Taylor.

Smith may have inherited his inexhaustible gift for storytelling from his grandfather, Courtney Smith, a Victorian prospector in South Africa’s gold rush who commanded a machine-gun outfit during the Zulu Wars of the 1870s.

Courtney used to tell how, during one safari, he was woken by the frenzied barking of his mastiff, an immense dog called Brainless.

The dog refused to be quiet so, in the dark, he felt around for a whip to beat the animal. The barking changed to a high-pitched growl and then a roar.

A bearer came hurrying with a lamp — and Courtney was confronted with a lion, slavering with blood. It had killed his dog.

The way Courtney told it, he looked at the ‘whip’ in his hand . . . and realised he was thrashing the lion with a black mamba, Africa’s most venemous snake.

Growing up with such macho stories ringing in his ears, it was inevitable that young Wilbur would try to emulate them.

His need to prove himself was made more urgent by the legacy of childhood illnesses, including a cerebral malaria infection as a baby that he was not expected to survive, and a bout of polio in boyhood that left him limping.

Aged 15, he and his friend Barry took a pair of rifles and headed off in a ‘borrowed’ Jeep from the Smith cattle ranch in Northern Rhodesia, now Zambia.

They drove all day, fording the Kafue River before abandoning their vehicle and setting off on foot in search of a big-horned bull antelope called a kudu.

The teenage hunters failed to kill their prey — and as night fell, they realised they had no idea where their Jeep was.

For the next two days, they wandered in circles before Herbert flew over in his Tiger Moth biplane. Back at the ranch, Wilbur’s father silently took off his belt and thrashed the teenager.

Herbert had little regard for his son (‘He called me an idiot a million times’, Wilbur recalled) and scoffed at his ambitions to be a writer. Instead, a job was found for him in the tax office. 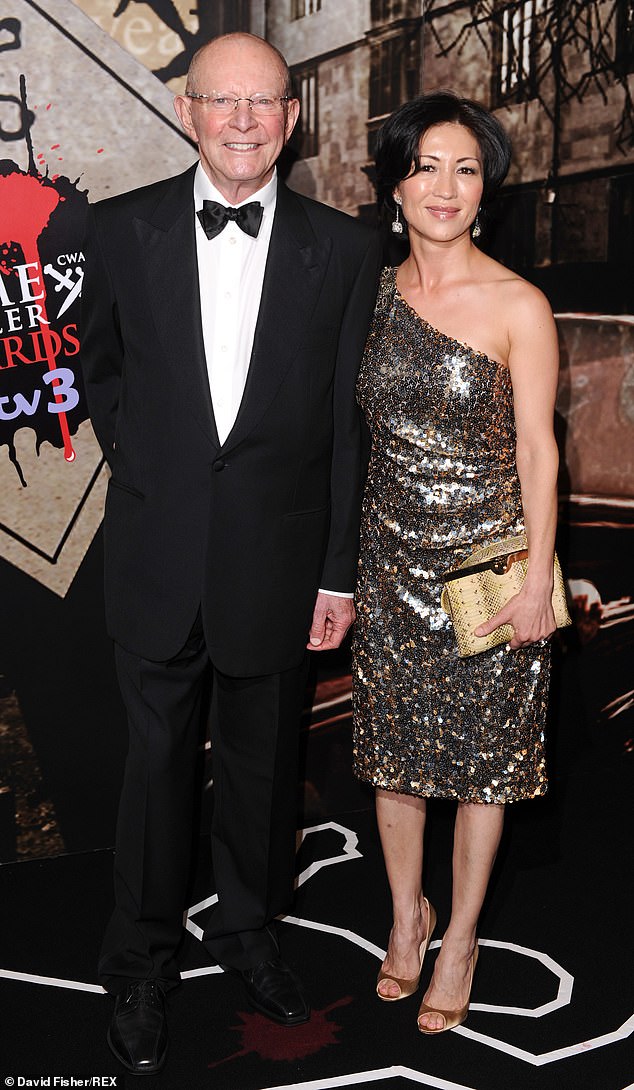 After a brief marriage to a woman named Anne Rennie ended in divorce, leaving him struggling to pay maintenance for two small children, Wilbur tried to write a novel.

His first attempt, ‘all radical politics and immature philosophy’, was rejected more than 20 times, before an agent told him to ‘write what you know’. The result was When The Lion Feeds, which opens with a boy called Sean Courtney on a family safari, desperate to impress his father.

Herbert Smith was not a man who read novels, and made no exception for his son. But he did keep a copy of When The Lion Feeds in the boot of his car, as a trophy to impress friends.

This book, published in 1964, was the first of a series featuring Courtney. Smith’s next bestseller, The Dark Of The Sun, follows a band of mercenaries during the Congo’s civil war of the 1960s — murderous, womanising, drunken men, pursued by the demons of their pasts — ‘Hired to kill, fighting to live.’

Smith wrote fast-flowing, convincing dialogue that left the reader in no doubt that he knew how men talked when they had broken free from civilisation. He also had a knack for vivid violence, and almost pornographic sex scenes. His admirers included Stephen King, who called Smith his favourite historical novelist: ‘The bodices rip and the blood flows.’

To research his books, Smith plunged headlong into danger, living in shanty towns around gold mines, visiting war zones and spending a season as a whaler with a Japanese fleet.

He enjoyed flying and scuba diving, and for much of his life took three shooting safaris every year, with the goal of killing three lions and three elephants each time. He loved to pose with his hunting trophies, seated on a leopard’s pelt and framed by a gigantic pair of ivory tusks. 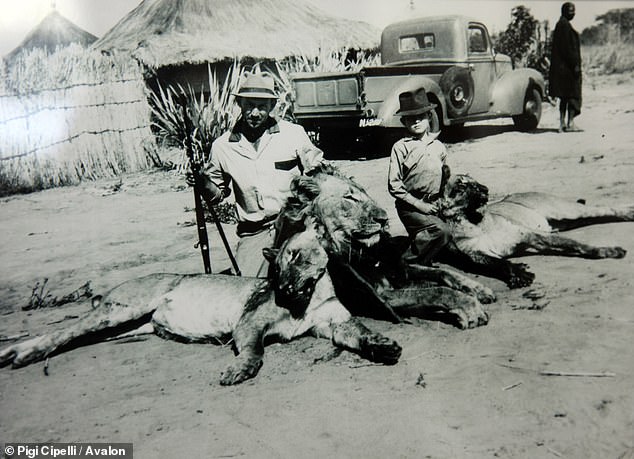 Success brought him colossal wealth, with his lifetime earnings from his 49 books estimated at more than £100 million.

By the time he was 70, he claimed to have so many houses that he had lost count — perhaps nine, including places in London, South Africa and Switzerland, as well as an island in the Seychelles.

But riches did not bring family happiness. A brief second marriage, to Jewell Slabbert, brought

a third child: ‘If you’re going to go through life marrying every girl who drops her knickers for you,’ his father warned, ‘you’re going to be a very busy boy.’

After marrying for a third time, to a fan of his books, he became estranged from all three children.

‘They’re not part of me — they’ve got my sperm, that’s all,’ he said. ‘It’s sadder for them than it is for me, because they’re not getting any more money.

‘They did nothing to win my respect and, in fact, did exactly the opposite.’

His relationship with his former wives was equally frosty.

He liked to boast that he once bumped into the second Mrs Smith in the street and didn’t recognise her: ‘She said: “Hello Wilbur,” and I said: “Excuse me, do I know you?” She said: “Yes, you gave me a baby once.” ’

His third marriage to Danielle Thomas lasted 28 years, ending in 1999 when she died from cancer. 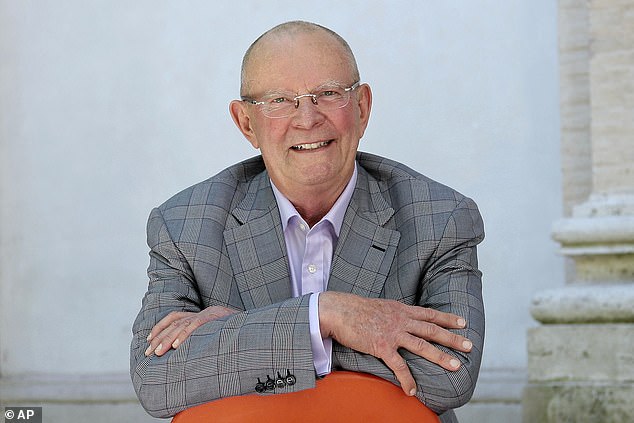 Wilbur Smith is shown in this June 20, 2011 photo in Rome. Smith died unexpectedly at his home in Cape Town, South Africa on November 13

A year later, aged 66, he was walking in London when, ‘I saw this nubile little Asian thing going down Sloane Street and I joined her in the bookshop’.

Directing her to the shelves where his titles were displayed, he introduced himself. She was Mokhiniso Rakhimova, a Tajikistan-born lawyer who was 39 years his junior. They were married a year later.

Niso, as he called her, ‘was young, and I was randy as a stallion in a ranch full of mares’.

Niso helped him to renegotiate his publishing contracts — the final one, signed in 2017, was worth £15 million — and he described her as his ‘most prized possession’.

‘I’m not proud of it but I’ve been married four times,’ he said. ‘Two of them died, the first one hates me and this one loves me, so I’ve covered the whole spectrum.

‘I’m lonely on my own. I need a woman by my side, someone I can talk to and respect, someone who pays me respect when it’s due and tells me when I’m being stupid, which is far too often.’

He was working till the end. When he died suddenly at his home in Cape Town on Saturday, he had been writing and revising his latest novel that very morning.

‘My epitaph will be: Don’t grieve for me,’ he once said. ‘I did it all. I had it all. Life has been good to me and I have everything I want — except immortality.’