He urged the world’s leading nations to come together to resolve China’s issues as he catalogued their consistent lack of transparency in the coronavirus outbreak. Sir Iain also labelled HSBC’s support for China’s national security law as a “grave error” and said, if he were a customer, he would close any accounts with the bank. Beijing has also come under fire over recent weeks after they proposed a new security law which would make it a crime to undermine Chinese authority in Hong Kong.

Speaking to Radio 4’s Today programme, Sir Iain said: “The problem at the moment is China is treated by individual countries and looked at in different ways, each individual country gets picked off by China.

“Australia called for an independent review of the COVID-19 outbreak and China has dumped on them very hard.

“It’s attacked their politicians, their sanctions. It happens to anybody who even bothers to criticise.

“We thought coming together to deal with this as a group to say, ‘China abuses human rights issues, issues around territorial problems which they ignore the UN’s findings on’.

“They also have problems with Taiwan, they’ve brought in this new law in Hong Kong cracking down there.

His blistering remarks come as the Tory MP and Baroness Kennedy of The Shaws were announced as the UK leaders of the new Inter-Parliamentary Alliance on China (IPAC). 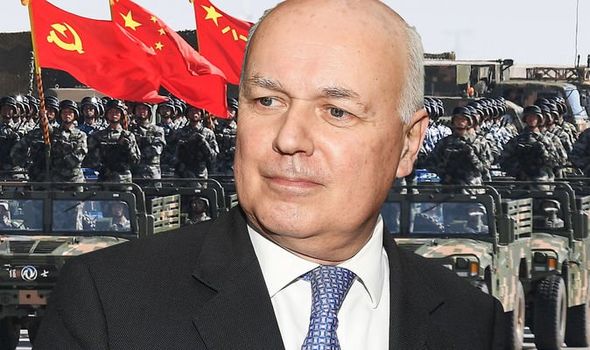 “In my personal opinion, I think it is a grave error by HSBC, getting involved in what is essentially a very difficult problem.”

He warned that the new law could remove the right to protest, giving police new powers to arrest those demonstrating on the mainland and the former British territory of Hong Kong.

Asked if he would advise people to shut their HSBC accounts, he added: “It is up to individuals but, personally, if I was there I would.

“I honestly think that the issue of freedom is more important than any business’ worry about a particular individual profit and loss at the bottom line.

“I think the truth is, a world that does not recognise human rights, freedom and the rule of a law is a world that will imprison even those businesses which want to do business with China.”

The new legislation, passed by China’s parliament last week, would see a clampdown on criticism on the Communist Party of China and the setting up of security agencies in Hong Kong for the first time.

The UK announced last week it would offer UK visas to the three million British National Overseas (BNO) passport holders in the former British territory, with a pathway to future citizenship, if Beijing enforced the planned changes.