Child, 13, is forced to marry 48-year-old man and become his fifth wife in the Philippines – where she will raise his children who are her age before having kids of her own

A 13-year-old child bride has been forced to marry a 48-year-old man and become his fifth wife in an Islamic ceremony in the Philippines.

Friends and family attended to see the girl dressed in traditional white married in the town of Mamasapano in the Muslim-majority Maguindanao province.

Groom Abdulrzak Ampatuan will make the girl look after his own children – some of whom are her age – before she has kids of her own.

Abdulrzak said: ‘I am happy to have found her and spend my days with her taking care of my children.’ 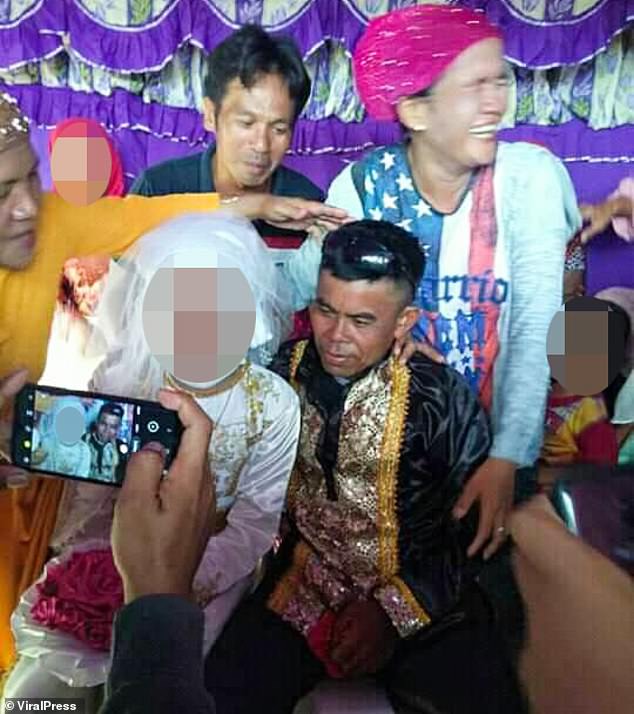 Groom Abdulrzak Ampatuan, 48, sits with his 13-year-old child bride – his fifth wife – while guests laugh and smile in the background

The wedding began at the groom’s house where he was given a traditional sermon on how to become a good husband.

The groom was then accompanied by wedding guests in a festive procession with drum bands playing as they walked to the child bride’s home.

The couple were pictured sitting beside each other while guests smiled and laughed.

The child allegedly said: ‘I am not afraid of him because he is nice to me. I am learning how to cook because I’m not good at it now. I want to make my husband happy.’

Three weeks after their wedding, Abdulzrak built a small house for the young bride where they stay together.

He is working as a farmer while his new wife does the household chores and takes care of the man’s children by his elder wives.

He claimed that he will not have children with the girl until after her 20th birthday and that he will be providing money for her schooling in the meantime.

Abdulrzak said: ‘I will pay for her school because I want her to get an education while waiting for the right time to have children.’

In the Muslim-majority Mindanao region, boys can marry from the age of 15, while girls can be married from the onset of puberty.

United Nations Children’s Fund (UNICEF) data shows the country has the 12th highest number of child brides in the world at 726,000.

Girls are even more vulnerable because the Philippines is the only country in the world where divorce remains illegal.

(Reuters) - Best Buy Co Inc held back from issuing a holiday-quarter forecast on Tuesday, saying it was unsure if a sales boom fueled by...

A report released by the Federal Reserve on Thursday showed a significant rebound in U.S. industrial production in the month of October. The Fed said...

We will use your email address only for sending you newsletters. Please see our Privacy Notice for details of your data protection rights.Priti Patel came...

Binance expects its users to transfer their holdings to its US subsidiary which, though regulated, is not yet available in all the 50 states of...

After rallying 80% in two months, Bitcoin (BTC) is recapturing media interest from the top end of town, with The Wall Street Journal discussing the...