A CHEEKY message spotted on a memorial bench has left visitors in stitches.

The amusing engraving, in memory of Nina Thersea Jenkinson, reads: "She took pleasure in annoying the fisherman by feeding the ducks." 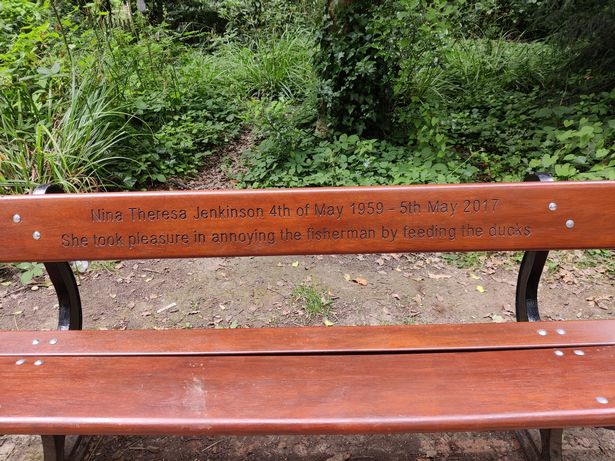 There is no further detail about the 58-year-old's relationship with the angler in question – but people have so many questions.

One person wrote: "What did she specifically dislike about that one fisherman?"

Another posted: "Now she's p***ing off fishermen in heaven."

A picture of the bench was shared on Reddit with the caption "I aspire to be like Nina when I'm old."

Users seemed to be loving the fact her family got such a witty tribute to the woman, born in 1959.

And one described Nina as a "longed" while another commented: "Good on 'er!"

One user said they "knew exactly where the bench was", but didn't disclose its location.

They said: "That's my favourite bench. That was my 'f**king lockdown I need to chill with some squizzers with a book bench'."

Others joked there may even be a separate memorial bench for the ducks.

The post about Nina's bench follows another which left a walker in hysterics.

They stumbled across a plaque in Margate, Kent, dedicated to someone who wasn't actually dead.

It read: "Dedicated to Hayden Kays. Forever missed by his friends and family.