London: Australian mining giant BHP has won a resounding legal victory in Britain, with a judge throwing out a landmark bid by Brazilian victims of the Samarco dam disaster to sue through English courts.

High Court judge Mark Turner said hearing the £5 billion ($9 billion) class action – the largest in British history – while action was also under way in Brazil would "lead to utter chaos" and saddle the English court system with the "largest white elephant in the history of group actions". 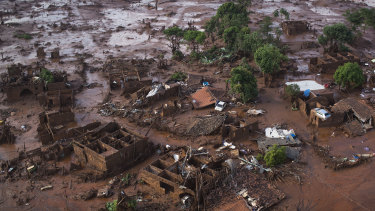 The collapse of the Fundao dam in 2015 killed 19 and poured roughly 40 million cubic metres of mining waste into communities.Credit:AP

However, Justice Turner took a dim view of the action and said the case was an abuse of process.

"The claimants' tactical decision to progress closely related damages claims in the Brazilian and English jurisdictions simultaneously is an initiative the consequences of which, if unchecked, would foist upon the English courts the largest white elephant in the history of group actions," Justice Turner said.

"It can safely be predicted that this unremitting cross-contamination of proceedings would lead to utter chaos in the conduct of litigation in both jurisdictions the procedural position of each of which would be in a near constant state of flux.

"The task facing the managing judge in England would, I predict, be akin to trying to build a house of cards in a wind tunnel."

In a statement, BHP said: "The High Court's decision is a strong endorsement of our position that these proceedings were unnecessary because they duplicated matters already covered by the existing and ongoing work of the Renova Foundation and which are, or have been, the subject of ongoing legal proceedings in Brazil." 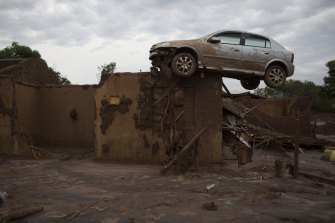 The mud submerged towns downriver from the Samarco Fundao dam.Credit:AP

Justice Turner noted that of the 200,000-plus participants in the English class action first filed in 2018, about 155,000 had received money from Renova or brought their own private legal proceedings by early 2019.

He also said the lawyers leading the class action had lost contact with 37,000 people they commenced proceedings on behalf of.

PGMBM, the international law firm representing the victims, said the judgment was flawed and would be appealed.

"We will continue to fight ceaselessly, for however long it takes, in any court in the world to ensure that BHP are held accountable for their actions," he said.

The 200,000-plus Brazilians had agreed to pay PGMBM 30 per cent of any damages secured in the English court action.

In an apparent swipe at the law firm, Justice Turner said the collective optimism of the claimants was "deeply and irredeemably flawed", in part due to the "misunderstandings arising from over-optimistic claims made either by their solicitors or those purporting to speak on their behalf".

He also said there was nothing to suggest the victims would get more compensation in an English court than they would a Brazilian one.

An expert United Nations report in September found none of the 42 projects to repair damage from the 2015 collapse were on track. UN Special Rapporteur Baskut Tunca alleged the "true purpose" of the Renova Foundation was to limit the liability of BHP and Vale.

Justice Turner on Monday said he did not doubt that many people had experienced considerable difficulty in obtaining what they considered just and prompt compensation in Brazil.

But he said the task of compensating victims and mitigating the damage was so vast that it would be "astonishing if, along the way, problems, even serious problems, were not to arise in managing the scheme in a fully coherent and effective way."

Get our Morning & Evening Edition newsletters

It looks like everyone has been so obsessed with bitcoin as of late that people have forgotten about some of the smaller coins that the...

The popularity of Bitcoin exchange-traded notes (ETN) on European stock markets continues to grow with VanEck joining the fray. With the US Securities and Exchange...

The vast distances of the Pacific region and the growing reach of the Chinese military has led the US to look for ways to disperse...