Storm Brendan is set to batter the country this week in what could be the second storm to strike in three days as Britons prepare to head to the polls.

The Met Office has issued severe weather warnings until Tuesday, warning of potential damage to temporary structures amid the very strong winds, but they have not yet said if the second storm will definitely be named.

And last night this proved to be the case as a Mercedes was crushed under scaffolding that fell from the side of a house on Clive Street in Cardiff.

The silver car was pictured this morning underneath the heavy metal frame as it was parked on a residential street. 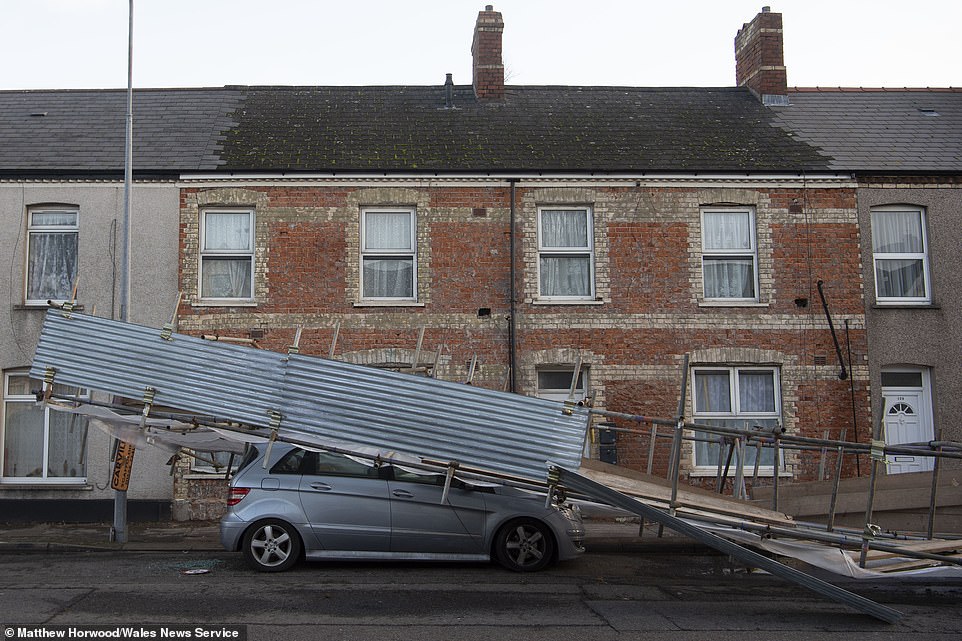 A Mercedes was crushed under scaffolding that fell from the side of a house overnight on Clive Street, Cardiff, amid the severe gales 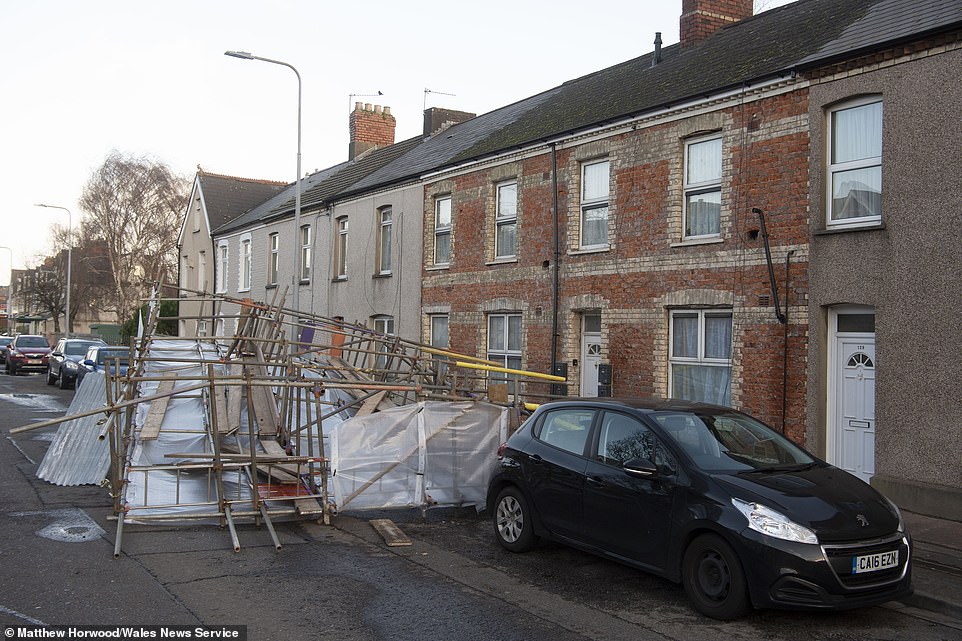 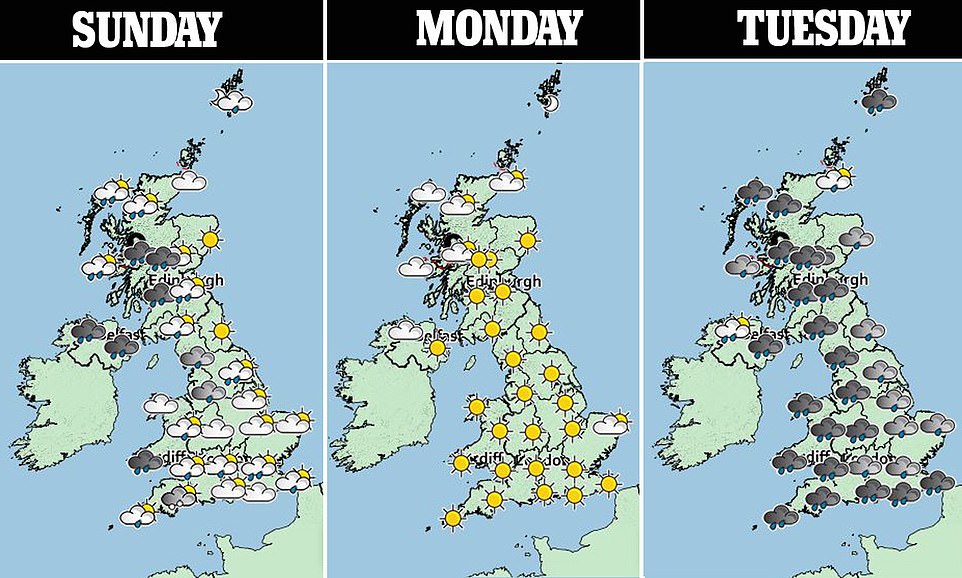 This week will see a period of wild and unpredictable weather with heavy storms, severe rain and high winds interrupted by spells of sunshine

The wild weather could even see snow arriving at the weekend with the odds of a White Christmas in London now shortening to 10/1.

The Met Office predicted travel disruption during the storms and the Environment Agency warned of coastal floods.

Storm Atiyah will see gusts of 60mph in England, 70mph in Scotland and even 100mph on Scottish mountains.

The Met Office will name the following tempest Storm Brendan if it has potential for amber weather warnings.

Tuesday’s storm is what is known as a ‘weather bomb’, an intense low pressure system with a central pressure that falls 24 millibars in a 24-hour period, the Met Office said. 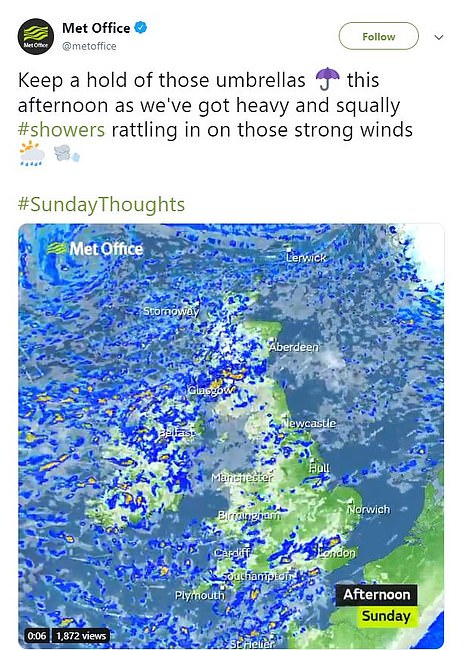 Thursday’s election day faces blustery showers, which has the potential to deter undecided or elderly voters from visiting polling stations.

A chill from Canada will then follow at the weekend, with snow threatening the Midlands in following days, and more named storms forecast in the week before Christmas.

Met Office forecaster Luke Miall said this morning: ‘With trees likely to be down, large waves and localised flooding, Monday morning commuters will have transport disruption from Atiyah’s gusts of up to 75mph in the South-West.

‘A windy Tuesday everywhere will see 50–60mph gusts in the South-West, North-West and Scotland, with 70mph possible in North-West Scotland, over 100mph on the Cairngorms, and 40-45mph in other parts of England.

‘There will also be pretty heavy rain everywhere. Wednesday looks blustery and election day will be a wet one in the South, with blustery showers in the North, then turning colder still by the weekend with wintry showers on higher ground in northern England, Scotland and possibly North Wales.’ 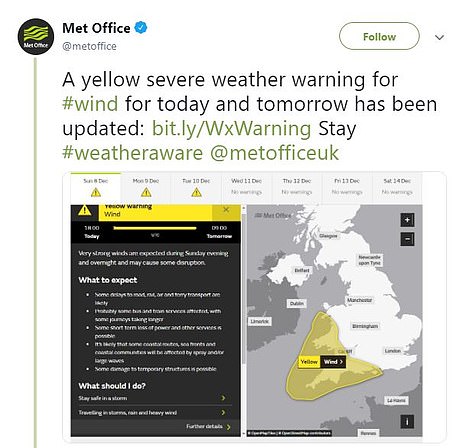 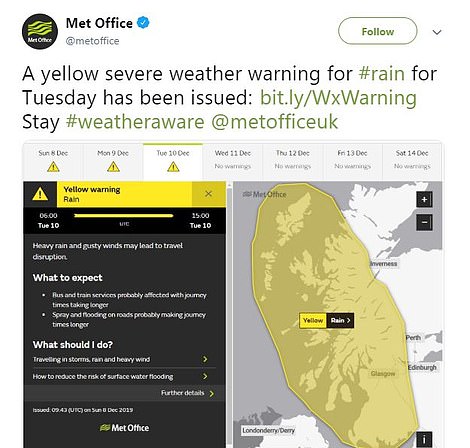 ‘Atiyah has very big waves and 80mph gusts possible in exposed parts of the South-West, with 50mph gusts in the East.

‘A second low pressure area on Tuesday could be stronger than Atiyah in terms of gusts. It’s a watching brief regarding naming that storm. We’re confident warnings will be issued, with power outages possible.

‘Gusts of 50-60 mph in England, 70mph in Scotland and over 100mph on the Cairngorms are expected.

‘Wednesday looks windy, with Thursday not nice with blustery rain in the South and chilly showers in the North with the chance of wintry showers on higher ground in Scotland, but no major disruption.

‘A surge of cold air from Canada brings colder conditions by the weekend, with the chance of snow in the following week – especially in central parts – with strong winds for the run-up to Christmas, with potent low pressure areas.’

The Environment Agency said: ‘Localised flooding is possible on east and south coasts on Monday, and rivers and surface water in the West on Tuesday. There may be travel disruption.’