Boris Johnson today gave the green light for people to celebrate on New Year’s Eve but urged the nation to be ‘cautious and sensible’.

The Prime Minister said he believes ‘everybody should enjoy New Year’ despite the spread of the Omicron variant.

He said the strain ‘continues to cause real problems’, with hospitalisations rising, but the data shows it is ‘obviously milder than the Delta variant’.

The premier today repeated his plea to the nation to get boosted as he warned that 90 per cent of Covid patients in intensive care units across the country had not received the top-up dose.

Mr Johnson has faced criticism after failing to make a public appearance in recent days despite the coronavirus crisis.

He was grilled on the subject this morning as he was asked where he had been ‘for the last 10 days’, he replied: ‘I have been in this country.’

The comments came as hospitality chiefs suggested that as many as 100,000 Scottish and Welsh revellers could cross into England for New Year’s Eve celebrations.

Restrictions on social events in neighbouring nations are expected to prompt a flood of people crossing into England on December 31, with the Scottish government having admitted it is powerless to stop Scots who want to make the trip.

Nicola Sturgeon and Mark Drakeford are facing a growing backlash over new Covid curbs in Scotland and Wales.

Social media has been flooded with people saying they are planning to head to England on Friday to bring in the New Year in the face of stringent restrictions on clubs and bars in their own nations.

It came as ministers said they have no plans to cut the Covid self-isolation period to just five days despite fears crippling staff shortages will threaten the NHS and other vital parts of the economy.

Scientists, MPs and business leaders have all lined up to urge Mr Johnson to follow the example of the US by once again reducing the time people have to spend in quarantine.

The Government has now said there are ‘no further changes’ planned but insisted the rules would be kept ‘under review’.

Meanwhile, pharmacists have called for urgent action to improve the supply of lateral flow tests as they said they are being forced to turn people away empty-handed while home delivery kits are unavailable for the third day in a row. 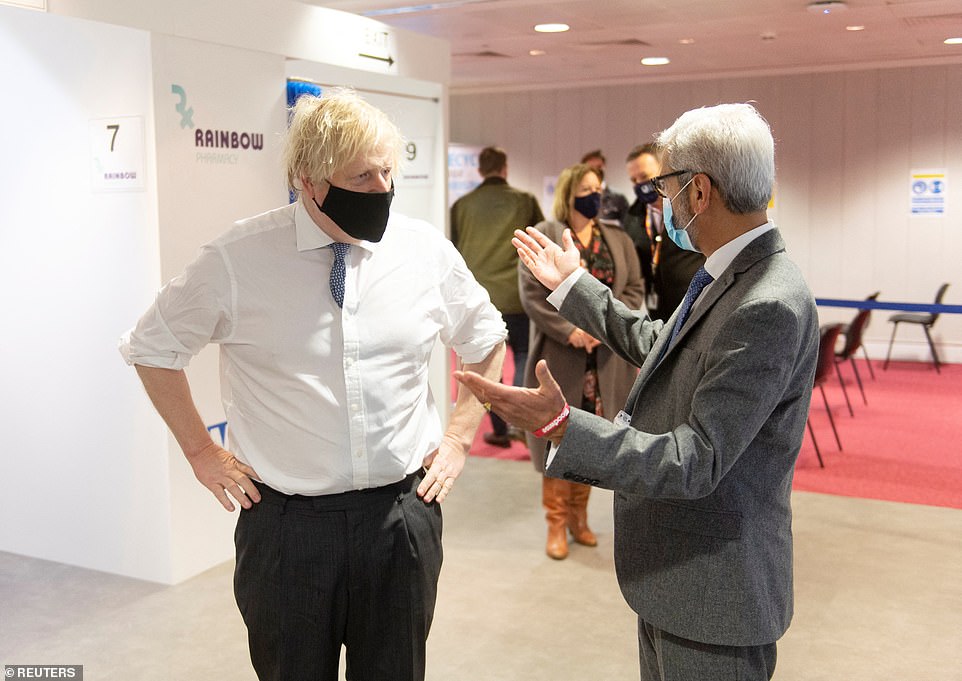 Boris Johnson today gave the green light for people to celebrate on New Year’s Eve but urged the nation to be ‘cautious and sensible’. He is pictured this morning at a vaccination centre in Milton Keynes 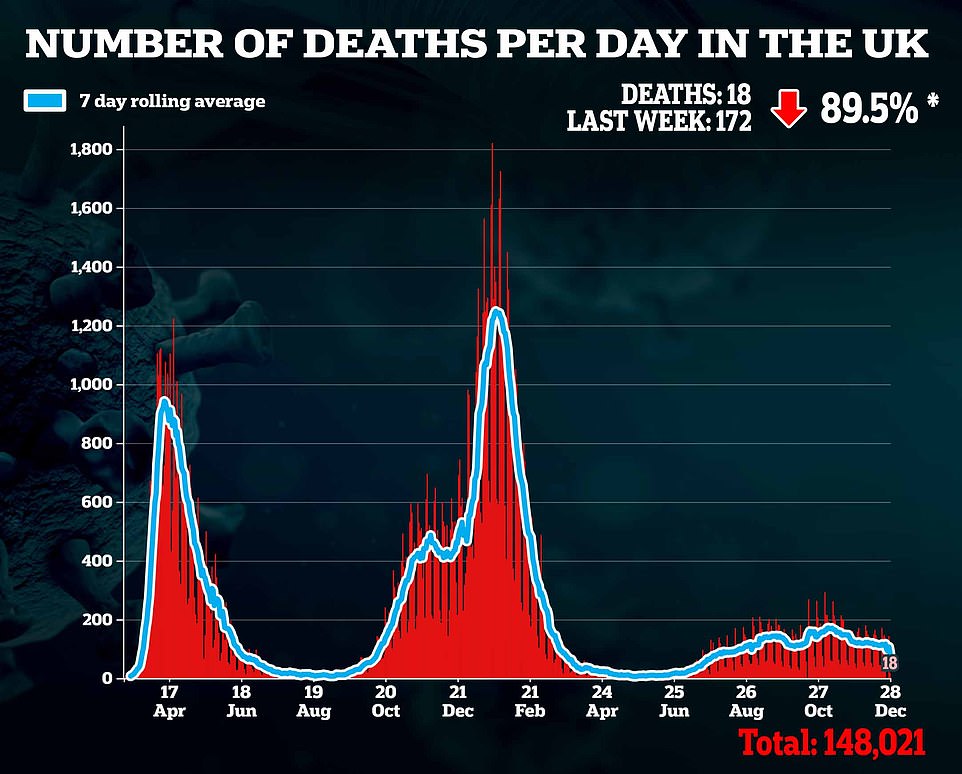 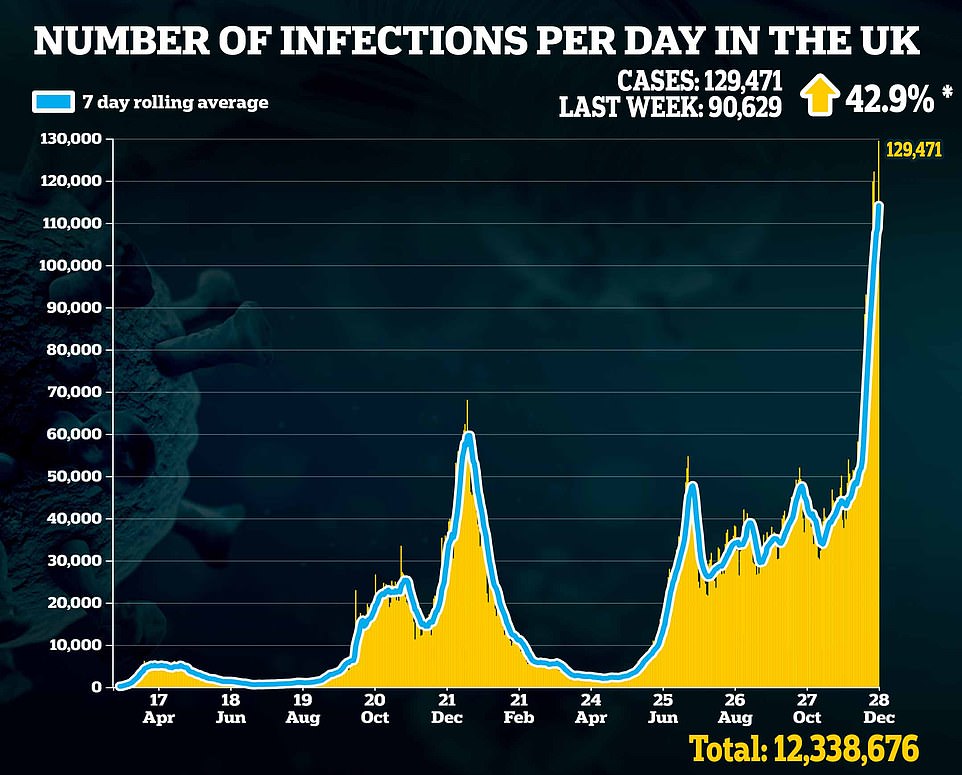 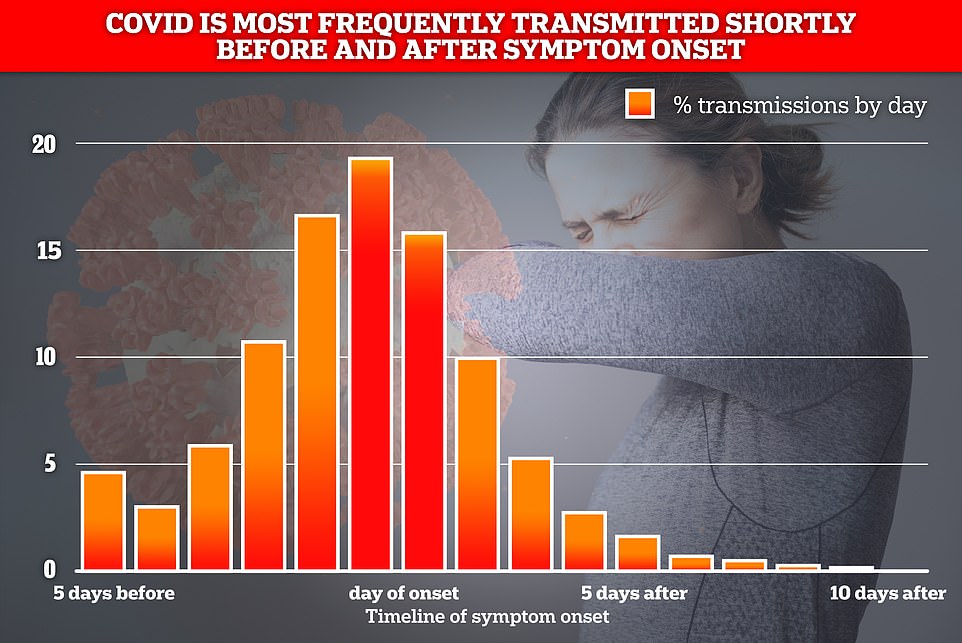 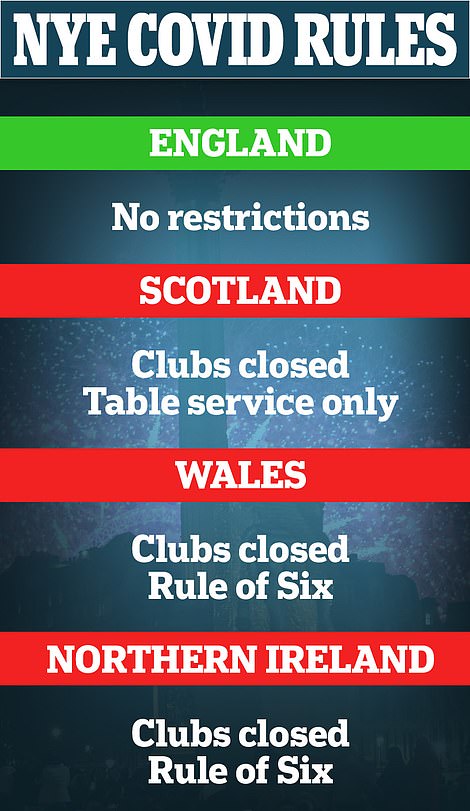 The latest coronavirus developments came as:

Mr Johnson has promised that there will be no new Covid rules in England before New Year’s Eve.

His decision not to roll out extra curbs is in contrast to the actions taken in Scotland, Wales and Northern Ireland where additional restrictions have been imposed after Christmas.

The PM said this morning during a visit to a vaccination centre in Milton Keynes that the vaccination programme meant ‘we are able to proceed in the way that we are’.

He said: ‘The Omicron variant continues to cause real problems. We are seeing cases rising in hospitals but it is obviously milder than the Delta variant and we are able to proceed in the way that we are.

‘But there is one reason and one reason only why we are able to do that and that is because such a huge proportion of the British public have come forward to get vaccinated and particularly to get boosted.

‘We have done about 32 and a half, maybe more, million booster jabs now and that is allowing us to go ahead with New Year in the cautious way that we are.

‘But I cannot stress too much how vital it is for everybody to get that booster jab, particularly the 2.4million people who have had two jabs but haven’t yet had their booster, they had two jabs more than six or seven months ago, so they are eligible for their booster but they are not yet coming forward to get it.

‘So I would say to people, come forward and get your booster, it is a fantastic thing to do, it makes a huge amount of difference to you, it protects you, and I’m sorry to say this but the overwhelming majority of people who are currently ending up in intensive care in our hospitals are people who are not boosted.

‘I have talked to doctors who say the numbers are running up to 90 per cent of people in intensive care who are not boosted.

‘If you are not vaccinated you are eight times more likely to get into hospital altogether.’

Mr Johnson was asked for his opinion on people crossing the border to come to England on New Year’s Eve.

He said: ‘I think everybody should enjoy New Year but in a cautious and sensible way. Take a test, ventilation, think about others, but above all get a booster.’

Asked why England is taking a different approach to curbs to Scotland, Wales and Northern Ireland, Mr Johnson said: ‘We are looking at the data and what we are seeing is that we have got cases certainly going up, we have got a lot of cases of Omicron, but on the other hand we can see the data about the relative mildness of Omicron and what we can also see is the very, very clear effect of getting those jabs, getting those boosters in particular.

‘That is what is making a huge difference. According to some of the surveys I have seen, 90 per cent of the patients in ICU are people who are not boosted. 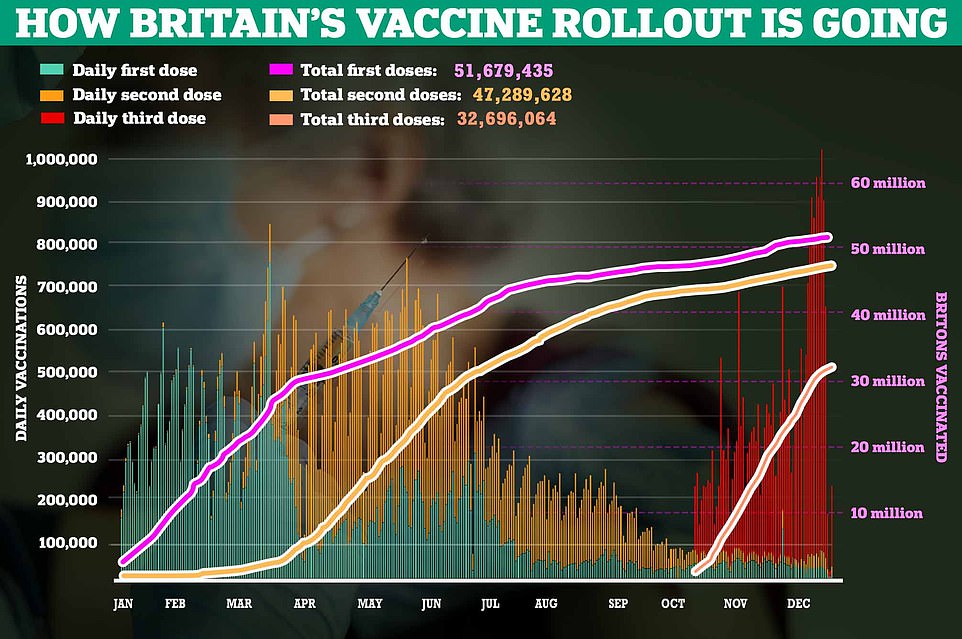 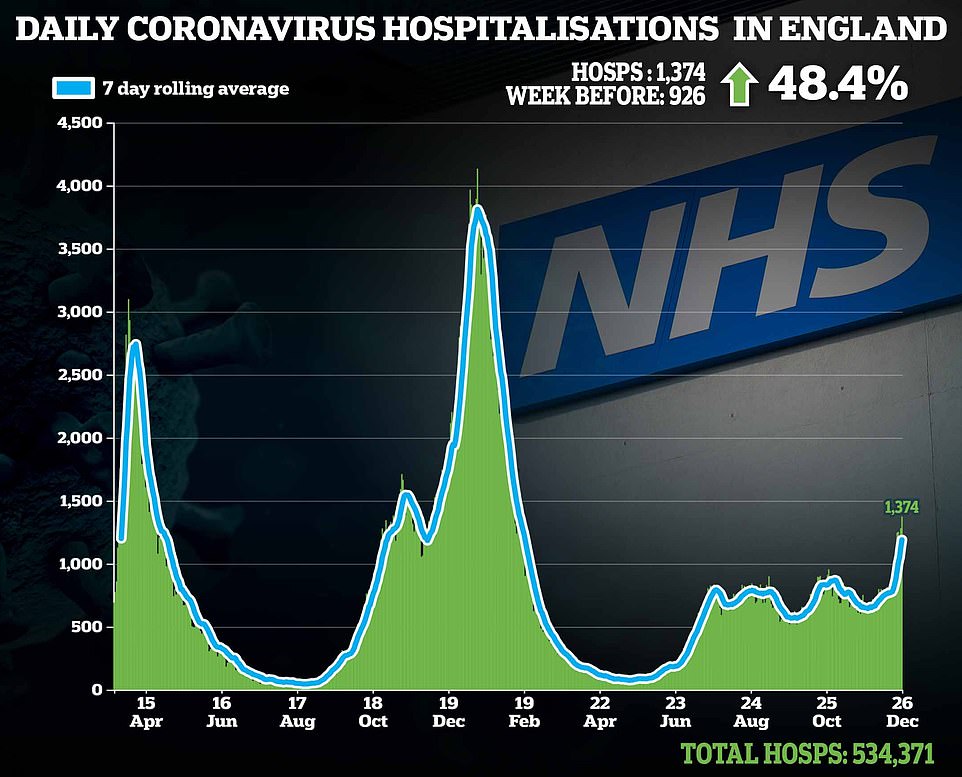 Mr Johnson said the Government had ‘looked at the balance of the risk’ and while cases are rising ‘what is making a huge difference is the level of booster resistance, the level of vaccine-induced resistance in the population’.

The PM said he believes ministers will hit their goal of offering every eligible adult a booster jab by the end of the year.

‘What we need to do now is really finish off that work and I have no doubt at all that by January 1, by the New Year, everybody, every adult in the country, will have been offered a slot to get a booster,’ he said.