President Biden’s summit meeting on climate change ended on Friday with the United States promising to reduce its dependence on fossil fuels and help other countries do the same. But the real test will be Washington’s ability to steer the rest of the world toward cleaner energy fast enough to avert catastrophe.

The limits of America’s influence were clear. Australia, India, Indonesia, Mexico and Russia made no new pledges to cut down on oil, gas or coal. Some countries said that they were being asked for sacrifices even though they had contributed little to the problem, and that they needed money to cope.

Away from the summit, the Chinese foreign minister demonstrated the difficulties the Biden administration faces in working with the country most crucial to lowering global greenhouse gas emissions.

The minister, Wang Yi, warned that Chinese cooperation would depend on how the United States responded to Beijing’s policies regarding Hong Kong, Taiwan and Xinjiang Province.

“Our two countries still have many differences, but still, President Xi attended the climate summit convened by President Biden. So, that is an action taken by China at the top level to work with the United States on climate change,” Mr. Wang said at a virtual event hosted by the Council on Foreign Relations. “If the United States no longer interferes in China’s internal affairs, then we can have even smoother cooperation that can bring more benefits to both countries and the rest of the world.”

The Biden administration this week pledged to roughly halve its greenhouse gas emissions by 2030 — an ambitious goal that is slightly below the target enshrined in law by the European Union and significantly below that of Britain. China, which argues that its industrialization began much later than in the West, is still increasing its emissions; it has said it will hit peak emissions by 2030 and draw them down to net zero by 2060. 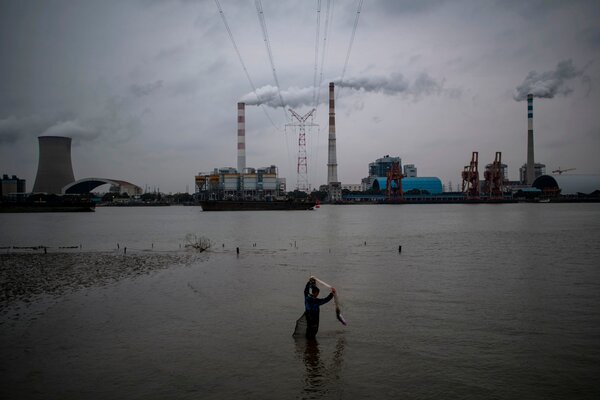 China’s emissions stem in large part from burning coal, the world’s dirtiest fossil fuel. The country is, by far, the world’s largest coal consumer, and it is building new coal plants at home and abroad, even as the United States and Europe have begun to retire their coal fleets. Chinese President Xi Jinping said at the summit that China would “strictly limit” coal projects in the immediate future and “phase down” coal after 2025.

Republicans in the United States immediately criticized the administration because China had not announced new emissions reductions targets.

In an interview Friday after the White House summit, the United States climate envoy, John Kerry, dismissed that criticism. He said he was optimistic that Beijing would raise its climate ambitions before the crucial climate negotiations sponsored by the United Nations in Glasgow in November and that he hoped China would announce a suspension of its funding for coal projects beyond its borders.

“We made a first step with China,” Mr. Kerry said. “Now we continue the diplomacy. We’ve got to go deal with China.”

Jennifer Hillman, a senior fellow at the Council on Foreign Relations, has been paying close attention to climate diplomacy this week. She said she saw the Chinese president’s participation at the summit as a promising sign. China’s foreign minister’s comments the following day were sobering, though, with Mr. Wang laying down what sounded like conditions expected in exchange for cooperation with the United States on climate change.

“Today was more a realistic picture,” Ms. Hillman said. “What I heard from Wang Yi is that there are a lot of prerequisites for this cooperation that are going to be very difficult.”

As in all diplomacy, there is a range of carrots and sticks available to the United States to advance climate action.

Money is at the heart of it. And there, the pledges at the summit left many people underwhelmed. The United States said it would double climate finance for developing countries to $5.7 billion a year. That represents a fraction of what the world needs, Manish Bapna, interim president of the World Resources Institute, said in a statement. It also lags behind many other rich countries, he pointed out, and “does not meet the needs expressed by leaders of vulnerable countries.”

That is all the more important if the United States, along with other Western countries, is to nudge emerging economies to meet their growing energy needs through renewable sources, said Jennifer Tollmann, a Berlin-based policy adviser at the climate research organization E3G. The United States is in a position to push the World Bank to make climate finance a centerpiece of its lending, for instance, and to respond to demands from many countries to ease their debt burdens so they can use their revenues to deal with climate change.

“Statements from various country leaders were very compelling and very clear: ‘We are being left behind. Where is the money?’” Ms. Tollmann said.

That is something the United States must do with its allies in the coming months, Ms. Tollmann said. A failure to raise huge amounts of capital to pay for the effects of climate change is “a risk factor,” she said, for the climate talks in November in Glasgow. That is the deadline for all countries to deliver new climate targets. The current targets are nowhere near what’s sufficient to avert the worst effects of warming.

Not least, the Biden administration’s announcement of $1.2 billion for the Green Climate Fund, which is designed to help poor countries address climate change, was seen by many as a drop in the bucket.

The United States and India late Thursday announced a joint effort to “mobilize finance and speed clean energy deployment” to help India achieve its goal to deploy huge amounts of renewable energy capacity by 2030. How much money would be in that package, and whether from public or private sources, was unclear.

Much remains unresolved barely three months into a presidency that has vowed to make climate change a centerpiece of its foreign policy. Many important capitals don’t yet have a United States ambassador in place, let alone diplomats versed in the science and economics of climate policy.

The administration needs the approval of Congress to mobilize money for its domestic climate goals and for overseas development aid that it’s promised. There is no political appetite, especially among Republicans, for a carbon tax. And Mr. Kerry has said he is “concerned” about a carbon border tax that the European Union is poised to establish on imports that come from countries that do not impose levies on goods that depend heavily on fossil fuels.

The administration’s next test of climate diplomacy comes when Mr. Biden travels to Britain and Belgium in June for the next Group of 7 meeting, his first overseas trip as president. That is all the more crucial if it expects to move China along.

Relations between Washington and Beijing are at their lowest in decades, and even on the issue of climate change, there have been tense exchanges of words. The Chinese Foreign Ministry spokesman last week described the re-entry of the United States into the Paris climate agreement as a “truant getting back to class.”

Mr. Kerry said on Friday that the comment was “not particularly conducive” to a conversation on climate action, and that he had told his Chinese counterparts just that.

Key to any American strategy, analysts said, is breaking out of the isolation of the last four years, which makes the next few months extremely important. “If the United States wants to have significant leverage with China it will have to work with allies,” Ms. Hillman of the Council on Foreign Relations said.