BABY milk, dummies and kids' clothes are on the bonkers list of 'non-essential' items banned from sale in Welsh supermarkets – but shoppers can still buy booze and fake eyelashes.

Brits have been left baffled – and fuming – over the items that can and can't be bought at stores after a confidential list was leaked online. 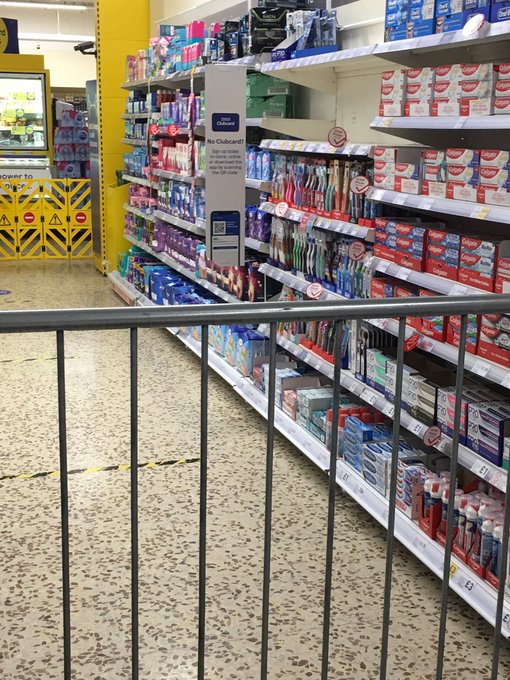 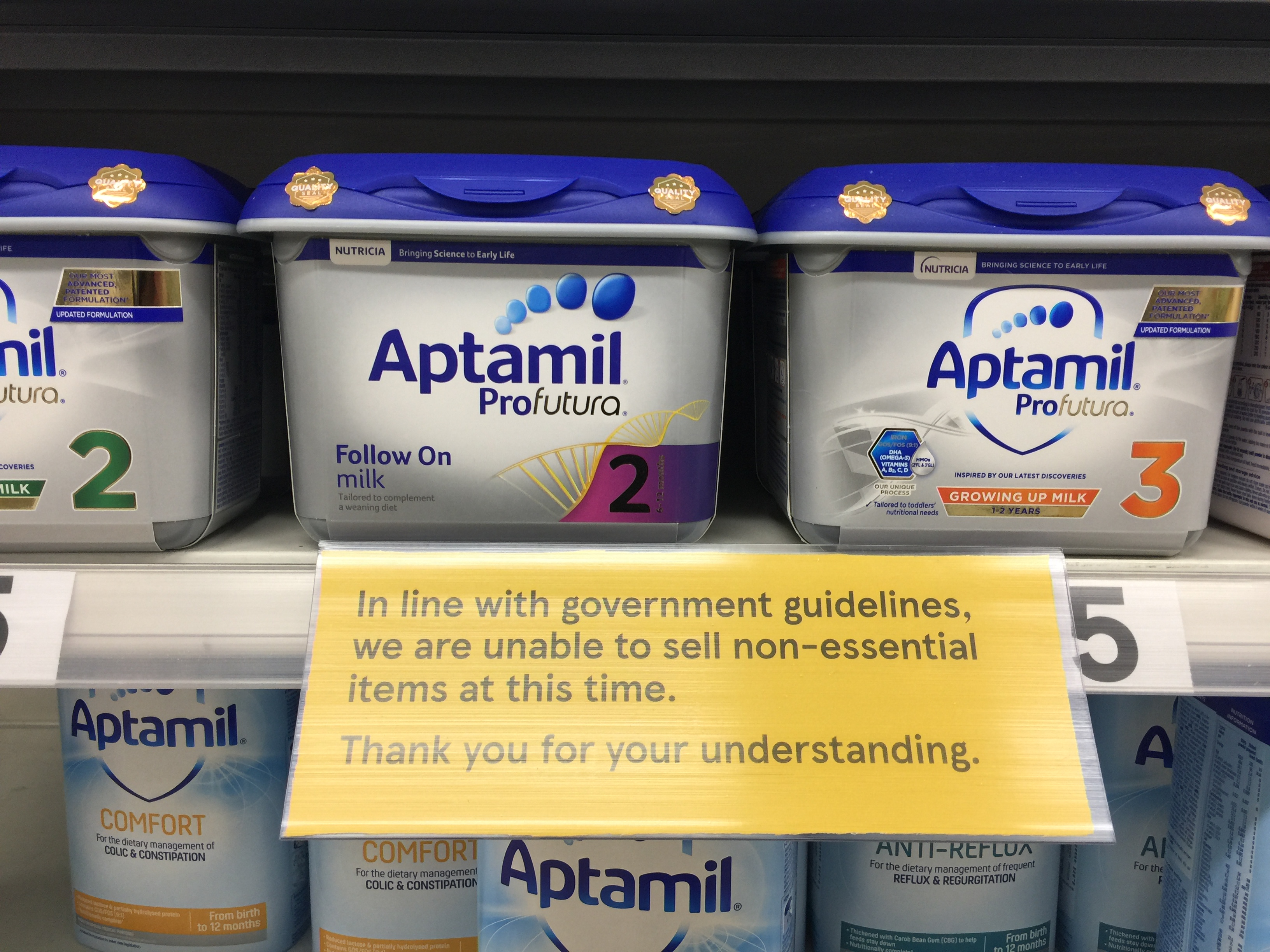 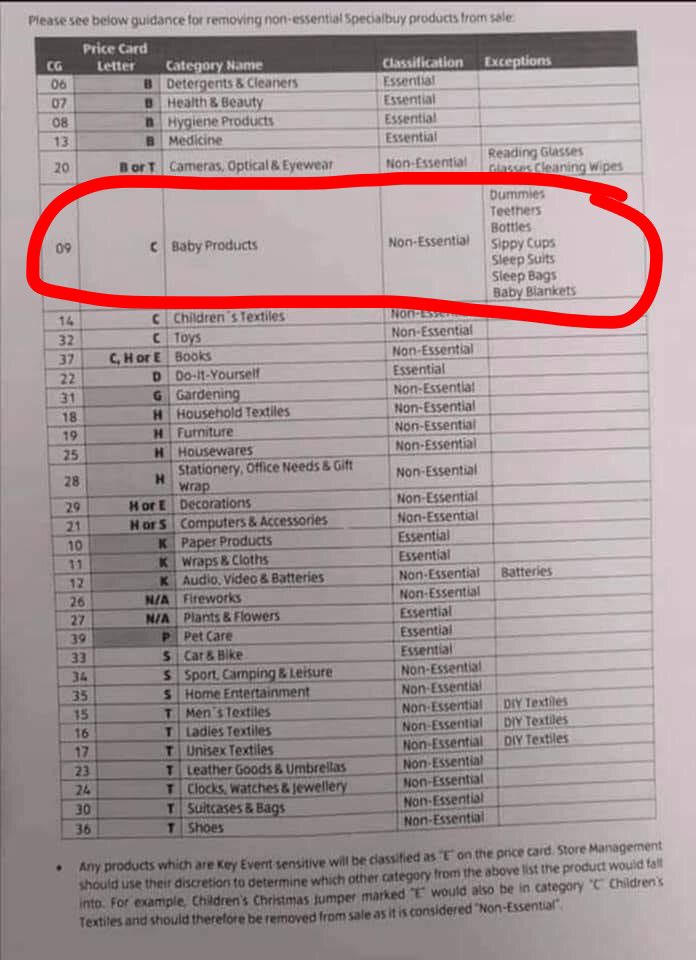 And tens of thousands of people have signed a petition calling for the policy to be revoked after social media users flooded Twitter and Facebook with images of taped-off baby grows and blocked-off aisles of electronics.

Today, Tesco was blasted after a shopper was told she can’t buy sanitary pads at a branch in Wales because they are not an essential item.

The supermarket giant has found itself embroiled in a furious row as female customers say they were left “raging and in tears” over the move.

It later clarified that people can buy tampons and pads after the government intervened.

And today there's been further confusion after signs were put up in Tesco to say baby formula couldn't be sold.

But the Welsh government has now issued a statement on the ban, with an official stating: “Of course the sale of baby milk has not been banned.

"We have raised this with Tesco and they have clarified the position.”

Today, the I newspaper revealed that in Home Bargains, shoppers can buy six-packs of sparkly nail varnishes and false eyelashes – but not a warm hat or gloves.

In Poundland, as in supermarkets, clothing is cordoned off.

And in Superdrug, shoppers can spend their money on beauty advent calendars and rubber ducks – while colouring books are 'contraband'.

A list of what is and isn't available for purchase has also been circulated on Twitter after it was leaked.

Children's clothes, reading glasses, toothpaste, stationary and shoes are non-essential – but plants, flowers and beauty items are on the essential list.

Micheal Enea, from Newport, obtained the list of what can be sold – or not – in shops.

He said there is "utter confusion".

"This tells me there is utter confusion amongst retailers as to what is essential and what is not. 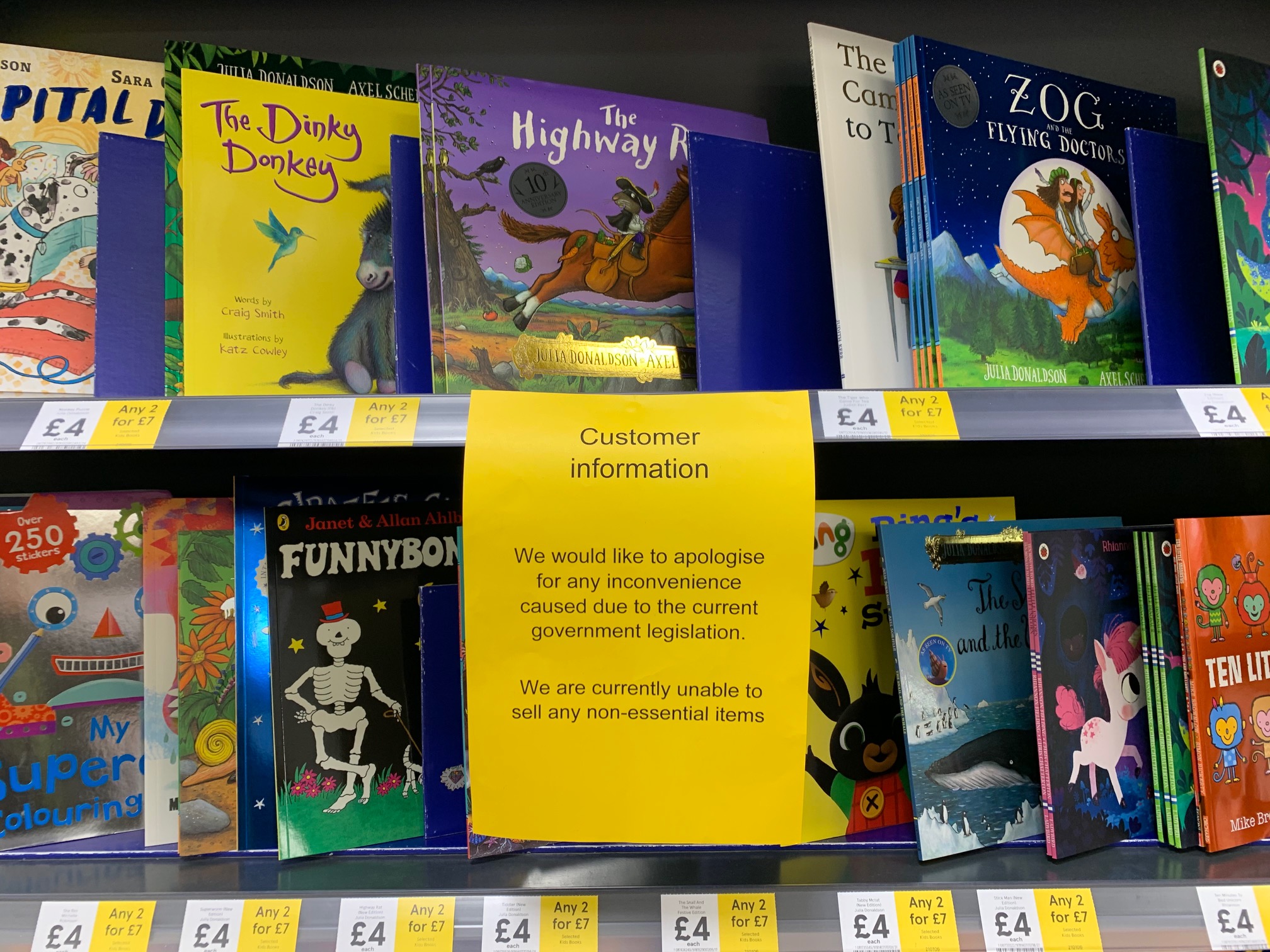 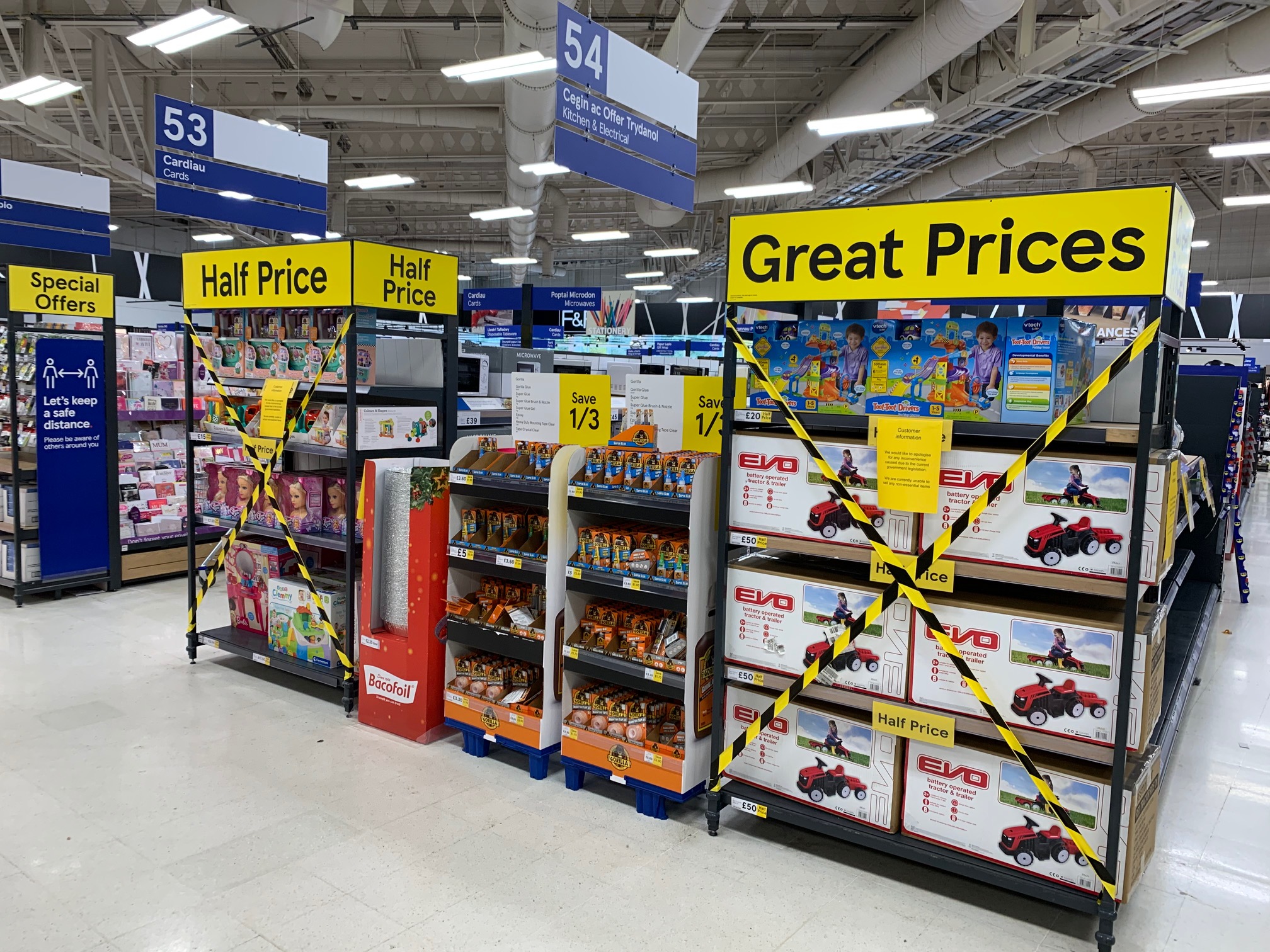 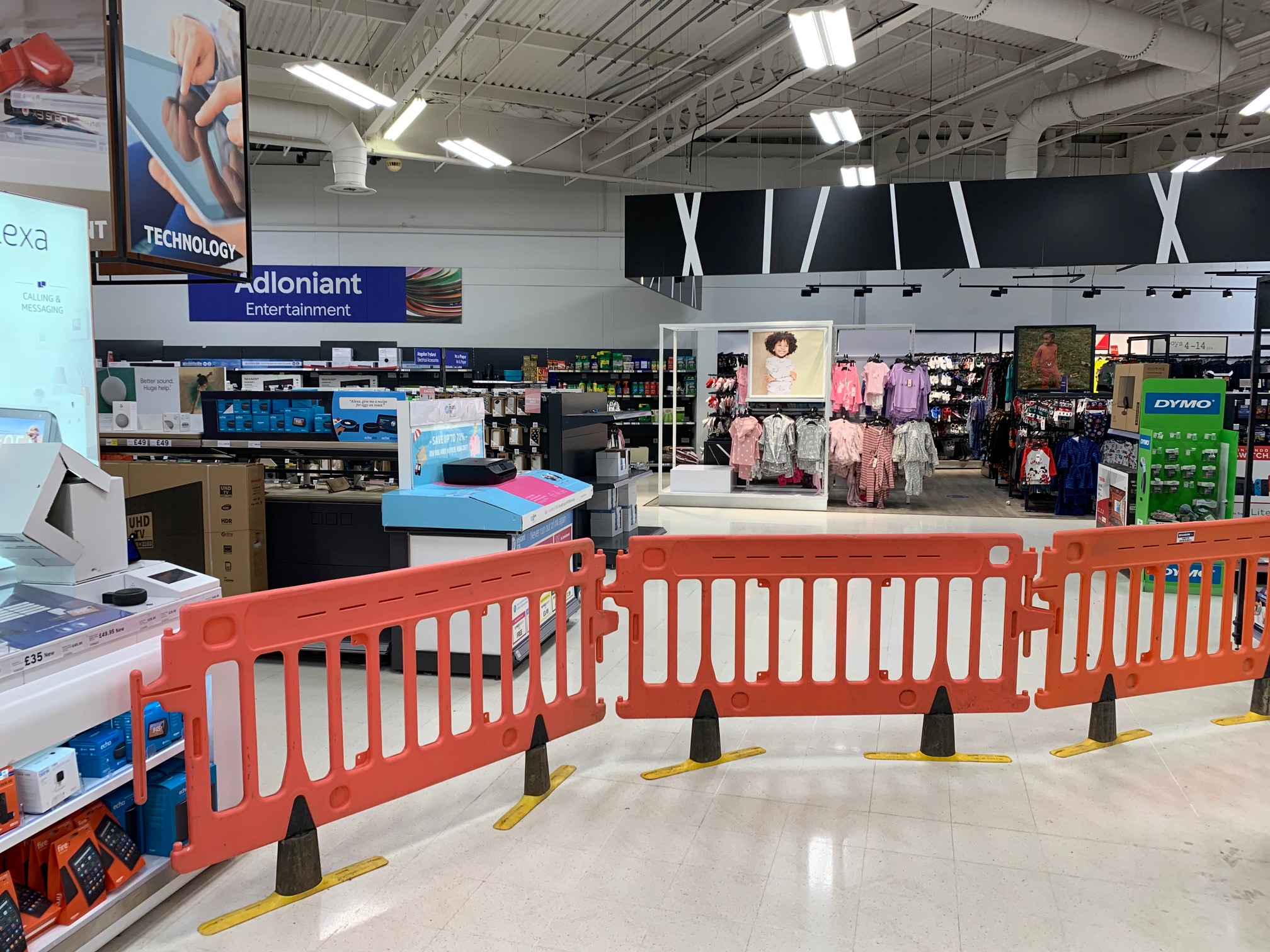 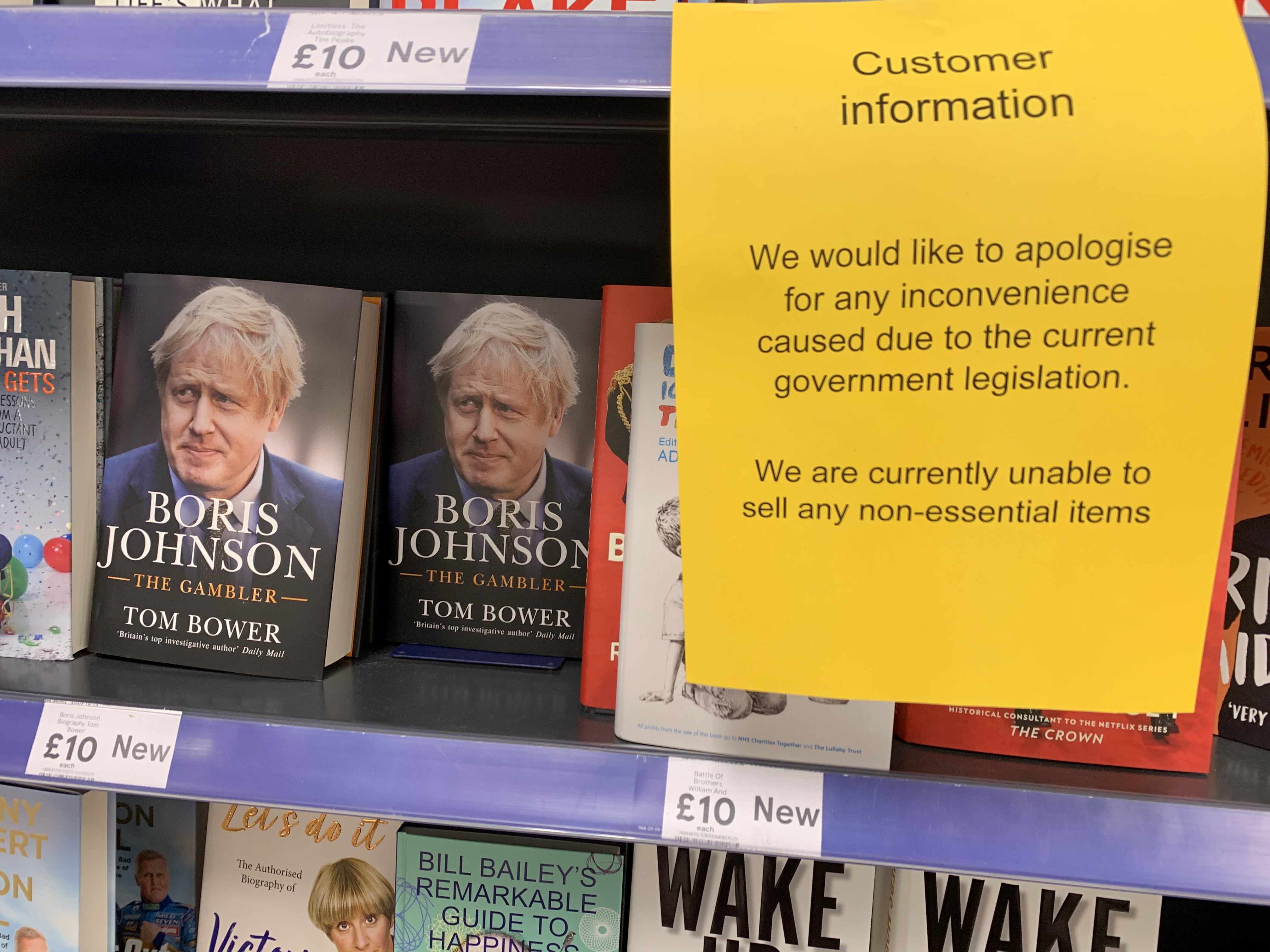 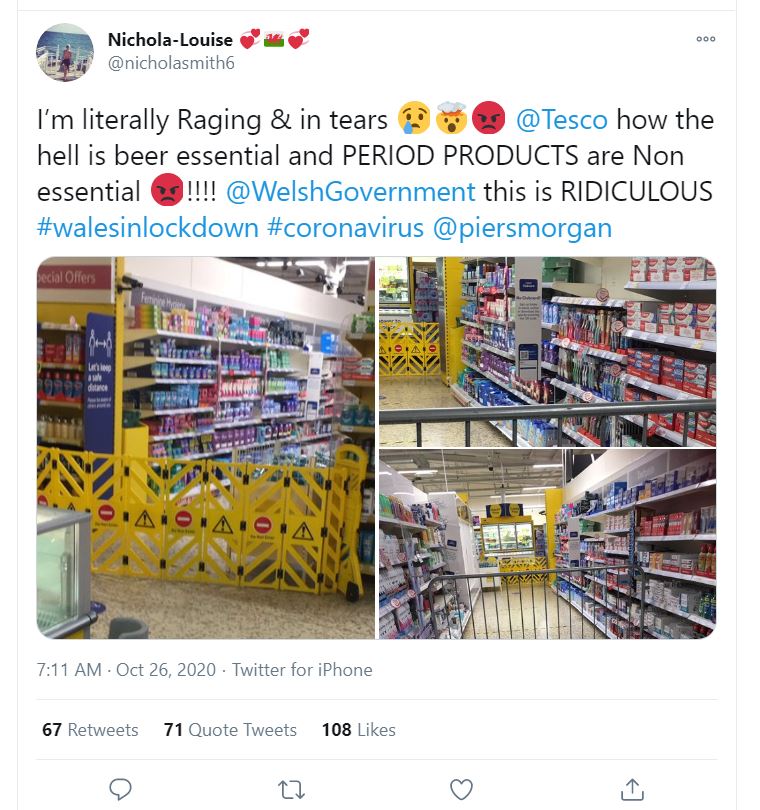 "Yes, we need guidance and restrictions to combat Covid-19 but this whole situation of restrictive buying of essential items has gone way too far."

And there's been more chaos as a top minister says shoppers can buy non-essentials… but only when they're essential.

Health minister Vaughan Gething said customers should be allowed to buy "otherwise non-essential goods" if there were "exceptional circumstances" that meant they were essential.

Mr Gething told Sky News this morning that they were "clarifying" the rules.

"We are looking to have that clarity for everyone so you don’t see cards for example sealed up in one shop but available in another," he said.

"If there really are exceptional circumstances and someone needs what would otherwise be a non-essential item, that that can happen as well."

Stationary, books, warm winter duvets, children's clothes and even cleaning products like mops are banned from sale until November.

During the new shutdown, which came into force at 6pm on Friday, stores are unable to sell clothes to customers and staff are being told to prioritise the sale of "important" essential goods.

Many have now lashed out at Welsh First Minister Mark Drakeford.

So, what can you buy in Wales?

Welsh people can buy products that would normally sold in:

The rules state: "Businesses which would normally sell a range of products in their stores may only sell those items which fall into the categories above.

"This is likely to mean some areas of stores should be closed to customer access. It will be important though for such stores to manage access to different categories of goods in a way that ensures customers and staff can circulate safely within the store.

"Some products may need to remain available to avoid creating unnecessary constraints on a mixed product aisle to the safe circulation of customers."

He has confirmed a review into items on sale in supermarkets will take place this week.

He said: "We’ll be reviewing how the weekend has gone with the supermarkets and making sure that common sense is applied.

"Supermarkets can sell anything that can be sold in any other type of shop that isn't required to close.

"In the meantime, please only leave home if you need to."

But during a press conference last week, the politician said: "It is a straightforward matter of fairness – we are in this together here in Wales.

"No individual and no organisation is above the effort that we are all required to make.

"That includes people who may believe that they themselves are beyond the law, and includes those organisations that are large and powerful."

Mr Drakeford justified the ban by telling ITV Wales News: “I won’t need, I don’t think, to buy clothing over this two weeks and I think many, many people will be in that position too."