Singapore: Australia, India and the United States have joined Indonesia, Singapore and Malaysia in the multinational search for the KRI Nanggala-402 submarine that disappeared off the coast of Bali on Wednesday.

On Friday Australia’s Department of Defence announced that two ships on separate deployments in the region – HMA Ships Ballarat and Sirius – were on their way to the search area. 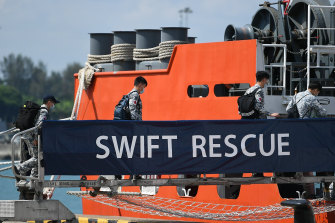 Crew board the MV Swift Rescue, a submarine support and rescue vessel, before being dispatched to Indonesia from Singapore.Credit:AP

The Indonesian navy lost contact with the 42-year-old German-built vessel at 3am on Wednesday local time [6am AEST] after it set off on a dive while taking part in a training exercise.

Australia’s Anzac class frigate Ballarat, which has sonar capability and a helicopter, was expected to be in the search region on Friday, a Defence Department statement said.

“The support ship Sirius is off the coast of Brunei and will be in the search area from around Tuesday. Sirius can replenish ships with fuel, water and stores by day and night,” the statement said. 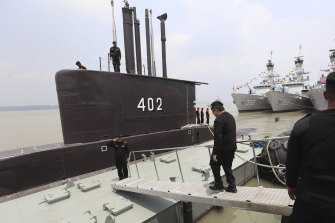 An oil spill was found near the site where the KRI Nanggala-402 submarine, pictured in 2014, was last located.Credit:AP

On Thursday, the Indonesian navy said no contact had been made with the crew but it hoped a sonar finding could lead to the submarine with the help of an echo sounder being installed on a warship in the area.

“What we found today is a high magnetism at a point within 50 to 100 metres deep and it’s floating,” Navy chief Admiral Yudo Margono said. “We hope it is the KRI Nanggala.

Officials said the submarine has a maximum operating depth of 500 metres but believed it may have sunk 600 to 700 metres. AP quoted an official from South Korea’s Daewoo Shipbuilding saying it would collapse beyond 200 metres.

There is also only enough oxygen to keep the 53 submariners on board the vessel alive until Saturday, the Indonesian navy has warned. The Singaporean and Malaysian vessels are not due to arrive until Saturday and Monday respectively.

Indonesian vessels that were participating in the drill along with the submarine – including 21 warships, two submarines and five planes – have also joined the frantic search.

“My thoughts are with the submariners of KRI Nanggala, their families and the Indonesian people.

“These two Australian ships will help expand the search area and extend the duration of search effort.“

US Defence Department spokesman James Kirby said the US was “deeply saddened by the news of Indonesia’s lost submarine” and US Secretary of Defence Lloyd Austin was due to speak to Indonesia Defence Minister Prabowo Subianto on Saturday to discuss further American assistance.

“At the invitation of the Indonesian government, we are sending airborne assets to assist in the search for the missing submarine,” Kirby said.

Indonesian President Joko Widodo on Thursday asked his nation of 270 million people to pray for the 49 crewmen, three gunners and the commander of the submarine.

“To all families of the submarine crews, I fully understand your situation at this very moment,” he said. “But the government has and will continue to do the best in the search and rescue operations.”