Republicans are mobilising thousands of volunteers to watch early voting sites and ballot drop boxes leading up to November’s election, part of an effort to find evidence to back up President Donald Trump’s unsubstantiated complaints about widespread voter fraud.

Across key battleground states such as Pennsylvania, Florida and Wisconsin, Republican poll watchers will be searching for irregularities, especially with regard to mail-in ballots whose use is surging amid the coronavirus pandemic, according to more than 20 officials involved in the effort. They declined to say how many volunteers have signed up so far; the campaign earlier this year said its goal was to recruit 50,000 monitors nationwide.

The mission, the officials said, is to capture photos and videos Republicans can use to support so-far unfounded claims that mail voting is riddled with chicanery, and to help their case if legal disputes erupt over the results of the November 3 contest between Republican incumbent Trump and his Democratic opponent Joe Biden.

The campaign is already posting material of activity it claims is suspicious, including video of a Trump campaign observer being turned away from an early voting site in Philadelphia last month. The city says monitors are welcome in polling stations on election day but are not allowed in early voting facilities.

Some voting rights activists are concerned such encounters could escalate in a tense year that has seen armed militias face off against protesters in the nation’s streets.

Poll watching by partisan observers is a normal feature in United States elections that dates back to the 18th century and is subject to various state laws and local rules.

Still, this year’s operation by the Trump campaign is highly unusual, voting rights advocates say, both in its focus on early voting and in its emphasis on finding evidence to support baseless assertions by the president and his supporters that Democrats plan to flood the system with fake mail ballots to steal the election.

In a recruitment video posted on Twitter in September seeking volunteers for this “Army for Trump,” the president’s son, Donald Trump Jr, made the unfounded claim that Democrats plan to “add millions of fraudulent ballots” to rig the results. Trump repeatedly has refused to commit to accepting the outcome of November’s election. During the September 29 presidential debate, he exhorted his supporters to “go into the polls and watch very carefully”.

Mail ballot requests are tilting heavily to Democrats in battleground states, which likely means Biden will be in the lead before in-person voting begins on election day.

Republicans said they plan to monitor every step of mail voting, including setting up cameras to show people dropping off multiple ballots at drop boxes. Some states allow third parties to drop off ballots, but the practice is banned in others, including Pennsylvania.

Pat Dion, head of the Republican Party in Pennsylvania’s Bucks County, a politically divided suburb near Philadelphia, predicted the process could get messy.

“There’s going to be lots of watchers, lots of cameras and lots of attorneys all across the country. It’s going to be chaotic,” said Dion, who said he nevertheless supports the effort.

Democrats and voting rights advocates say Trump is trying to suppress the vote, not protect it.

“It’s an attempt to scare eligible Americans into thinking they are in danger if they go to vote,” said Myrna Perez, voting rights and elections director for the Brennan Center, a nonpartisan voting rights group.

Democrats say Trump’s team is also laying the groundwork for a challenge to mail ballots in the event he loses, possibly throwing the election to Congress or the courts to decide the outcome.

Trump campaign spokeswoman Thea McDonald said in a statement that “President Trump’s volunteer poll watchers will be trained to ensure all rules are applied equally. And if fouls are called, the Trump Campaign will go to court to enforce the laws.”

This is the first presidential election in nearly 40 years that the Republican National Committee has been free to sponsor such “ballot security” operations without permission from a federal court. A 1982 consent decree restricted these activities after the party sent teams of gun-toting men to minority neighbourhoods during a New Jersey election wearing uniforms saying “Ballot Security Task Force”.

That consent decree expired in 2018 and a federal judge declined Democratic attempts to renew it.

In Wisconsin, a state Trump won by less than a percentage point in 2016, volunteers will be posted in critically important counties around Milwaukee, Republican state party chairman Andrew Hitt told Reuters.

Pennsylvania, too, is shaping up to be a hotbed of activity. Trump won it by just over 44,000 votes in 2016. He has almost no path to securing a second term if he does not win its 20 Electoral College votes again in November.

In Montgomery County, a formerly Republican bastion outside Philadelphia that is now reliably Democratic, the Republican Party is holding several virtual training sessions over the next two weeks for some 50 volunteers to monitor 11 proposed ballot drop boxes there, according to an email sent by the party to supporters and seen by Reuters. “It is critical that we make our Republican presence known, so voters know they cannot get away with fraud,” the email reads.

On the western side of the state near Pittsburgh, Trump supporter Bob Howard has volunteered to watch election offices where voters will be dropping off absentee ballots.

“We … need to make sure that all the rules are being followed, so people can trust the results,” the 70-year-old retiree said.

Democrats, meanwhile, are launching their own voter-protection efforts. But theirs is a more traditional approach that includes registered poll watchers and an army of lawyers.

In Pennsylvania, Biden’s campaign said it has launched the biggest such Democratic programme there in history, with more than a thousand lawyers and volunteers. It would not provide details on whether its monitors will be deployed at drop boxes and other early voting locations alongside their Republican rivals.

Election experts said the explosion of mail balloting is testing voting laws designed around in-person balloting. There is no rule book for monitors that try to enter early polling sites or challenge voters trying to drop off their ballots, said Terry Madonna, a political science professor at Franklin & Marshall College in Pennsylvania.

“It all comes down to county election officials and what they agree can happen. All of this seems headed to a major court battle,” Madonna said.

Confrontations have already emerged in Philadelphia, home to about 20 percent of Pennsylvania’s registered Democrats.

Election administrators there defended their decision to turn away the Trump campaign operative who filmed himself attempting to enter an early voting site on September 29.

“To be clear: the satellite offices are not polling places and the Pennsylvania Election Code does not create a right for campaign representatives to ‘watch’ at these locations,” Andrew Richman, chief of staff to the city solicitor, said in a statement. 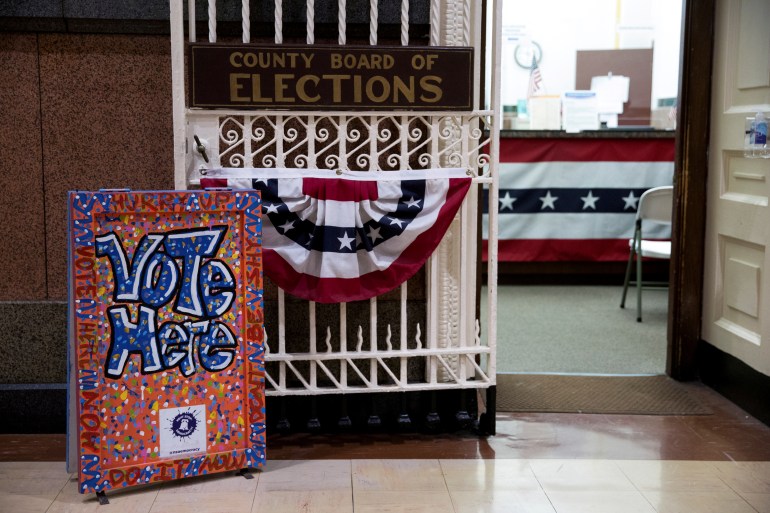 The Trump campaign cried foul after one of its operatives was denied access to a satellite voting location in Philadelphia, Pennsylvania, US [File: Rachel Wisniewski/Reuters]The Trump campaign quickly filed a lawsuit seeking access for poll observers in early voting sites. That suit is pending.

In Northampton County in northeastern Pennsylvania, meanwhile, the Republican Party tried to get sheriff’s officers assigned to drop boxes to request identification from voters dropping off ballots, according to Frank DeVito, a Republican member of the Board of Elections.

Pennsylvania law does not require voters to show an ID to vote. The Democratic-controlled board of elections denied that request.

Undeterred, DeVito said volunteers will be watching those boxes closely.

“We are telling them to take a folding chair, take video, take photos,” he said.