On August 23, 2021, as many members of his family as permitted by the lockdown rules gathered at St Luke’s Uniting Church, Mount Waverley, to join friends and colleagues all around the world to farewell one of Australia’s most distinguished science educators and researchers. David Symington had an engaging curiosity which he passed on to his students both secondary and tertiary. He had a generosity of spirit which endeared him to all.

David was born in Nyah West, Victoria, the oldest son of the Reverend John Symington, a Presbyterian minister (later a minister of the Uniting Church) and Hilda Williamson. The family moved to Dimboola and Castlemaine where David began his secondary education. In 1948, his family moved to Balaclava and David attended Caulfield North Central School before finishing his secondary education at Scotch College on a scholarship.

David was a “born teacher” and went to the University of Melbourne on an Education Department scholarship to complete a BSc and a Dip Ed. His first appointment was at Leongatha High School and then in 1965 as senior science and mathematics teacher at Mirboo North High School. David quickly made a strong impression in that role and was soon promoted to senior master (vice-principal) and then acting principal. 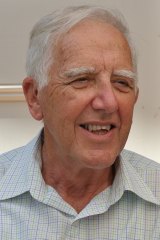 David was an outstanding teacher and highly regarded and respected by students, parents, colleagues and members of the broader Mirboo North community. David had the happy knack of finding the right balance between firmness and friendliness in his dealings with students. He set high academic standards and supported students with interesting and challenging activities that enabled them to meet his expectations. And, they did. David felt himself fortunate to be able to follow his passion for teaching.

David’s early research in primary science education focused on student learning and alternative conceptions from constructivist perspectives. He then developed a ground-breaking area of research in which researchers from Australia and New Zealand played an influential role. He investigated, for instance, students’ conceptions of plant reproduction (asking why do plants have flowers?), the place of children’s questions to drive learning in primary science, strategies for learning from museum visits and the power of drawing as a learning strategy. In his writing in those years, he partnered with influential science educators from Australia and New Zealand, including Peter Fensham.

In his role, from 2001, as adjunct professor of science education at Deakin, he was active in promoting a vision of science education reflecting the practices of science in authentic settings and in the community. He championed the vibrant role that rural communities could play in school science, bringing as ever a strong equity perspective to his research. Here also he drew on his experience at CSIRO, and his early years as a rural educator.

David is remembered as a wonderful colleague, supportive, insightful and with a dry and pervasive humour. He is credited with delivering one of the funniest ever after dinner speeches at the Australasian Science Education Research Association (ASERA) conference dinner. He was a founding member of ASERA and part of an important movement in establishing the status of primary science education research.

Soon after his retirement from Deakin University David joined CSIRO as a science communicator. He worked first at the Division of Molecular Science at Clayton and then as manager, public affairs and communications in the Office of the deputy chief executive, minerals and energy industries. While at CSIRO David became interested in ways to stimulate the emergence and growth of new technology-based companies, and in the role of publicly-funded research agencies in this process. He co-authored an influential paper on this subject.

David was a very active member of the Uniting Church in all the communities where he lived. He was particularly interested in the link between the traditions of his faith to the social and political issues of the day. He was a great support to his wife, Corrie, in her work as a Minister in two Uniting Church congregations in Melbourne. Corrie is still involved in pastoral care work.

David’s six children, 11 grandchildren, and one great-grandson enjoyed not just David’s love and affection but also his engaging curiosity, which extended to whatever they were doing. David was equally adept at driving to sporting and social events, babysitting or looking after his son’s dairy farm. He was always the first to volunteer to read a thesis or article, even on subjects in which he had to come to terms with a completely foreign specialised vocabulary.

Tom Spurling, Russell Tytler and Tony Lenten were colleagues and friends of David Symington. John Symington is his oldest son.