Two amateur football teams are under investigation for appearing to play a friendly game on the weekend after the Queen’s death despite the cancellation of all football as a mark of respect.

Local teams Sheffield International FC and Byron House, who both compete in the Sheffield and District Fair Play League, had been due to play a match on Saturday, September 10.

However, the game, along with all other competitive and friendly matches in England, was cancelled after the FA ruled no football-related activity should take place out of respect for Her Majesty, who died last Thursday.

This did not seem to stop the teams though, with Sheffield International FC tweeting on Friday that they still intended to play a friendly, before later clarifying it would be a ‘training session’.

In a terse rebuke to the decision to cancel all football – including children’s games – over the weekend while other sports such as cricket and golf continued as normal, they added they would ‘have a game of rugby’ if the training session was cancelled.

Now the league has announced it is investigating the ‘despicable’ behaviour of the two clubs and has vowed to deal with them ‘in the strongest possible terms’.

The drama, which emerged on Twitter, began when Sheffield International tweeted on Friday afternoon it was still intending to play a game despite the FA’s ruling all football should stop over the weekend. 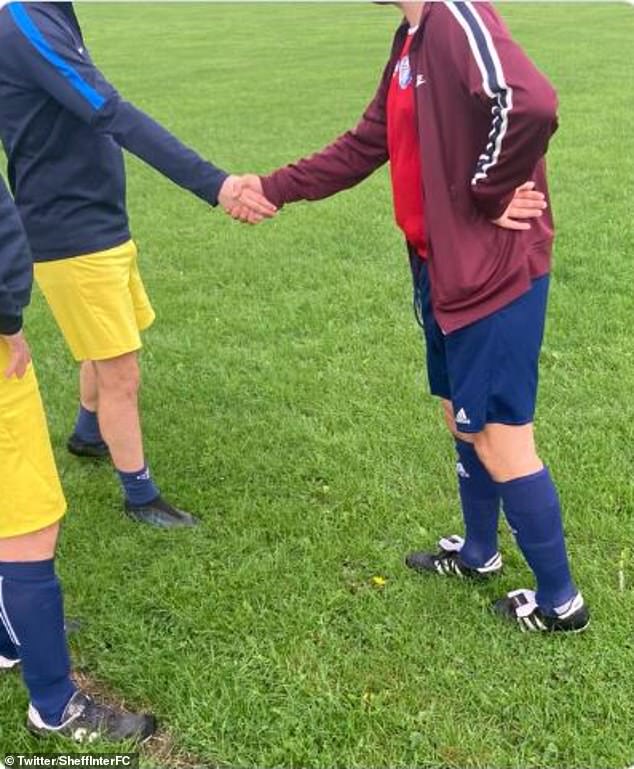 Amateur teams Sheffield International FC and Byron House are under investigation after allegedly playing a friendly match over the weekend despite football being cancelled by the FA after the Queen’s death. Pictured are players from the two teams apparently shaking hands before their friendly match on Saturday 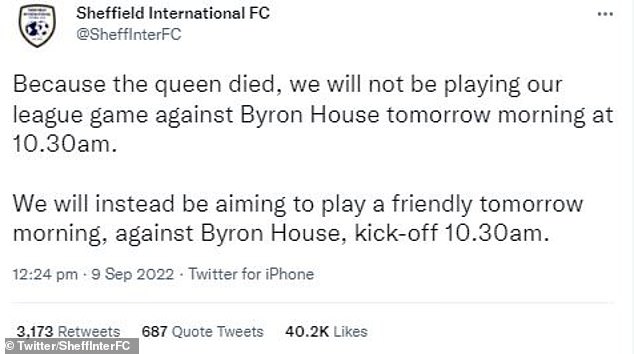 However, later that evening it said the friendly had been cancelled and it would instead be having Saturday morning practice, and took a jab at the fact other sports had been allowed to continue over the weekend.

It said: ‘Update, someone’s snitched on us so now even the friendly is off. So instead we’re having a training session tomorrow morning, at 10.30am. If that gets cancelled we’ll have a game of rugby seeing as that’s deemed respectful enough.’

It added: ‘Byron House more than welcome to come along, just remember to maintain social distancing at all times to ensure… wait a minute we’re not in a pandemic any more are we?’

The next morning the club Twitter account posted a picture of its players on the pitch captioned: ‘Silly billies. Everyone’s turned up in their match kit.’ 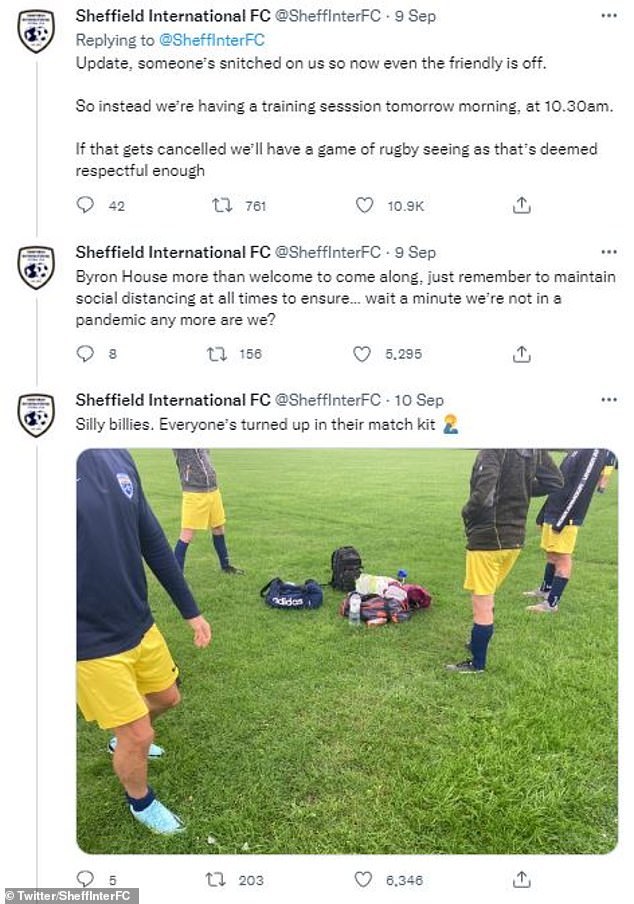 Another picture was then posted showing a man wearing a different kit, saying: ‘Oh wow! Byron House have arrived! Fancy seeing them here!’

In the early afternoon it posted a final picture showing people dressed in Sheffield International kits attending to the nets in one of the goals.

It said: ‘Think we’re the only club in the world that have two lads scrapping halfway through a ‘training session’ and trial a keeper who ends up as our main striker. Steady morning. To the Sword Dancer.’ 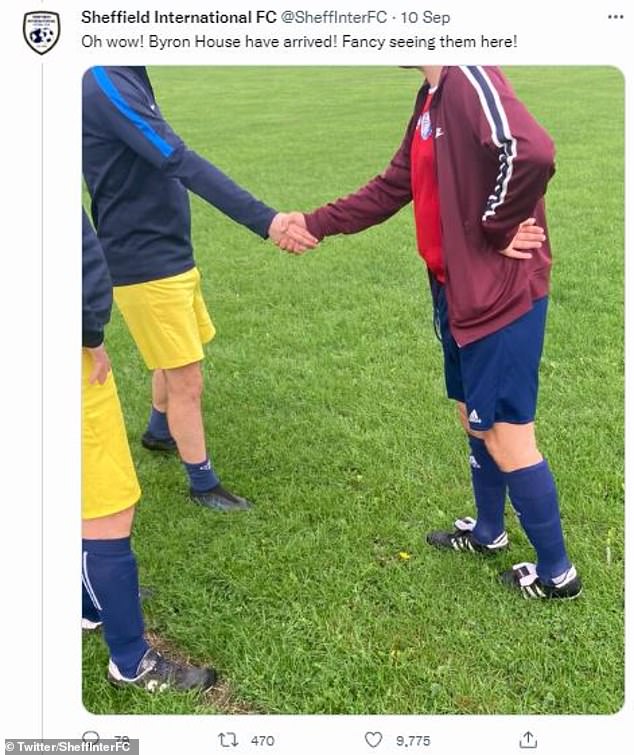 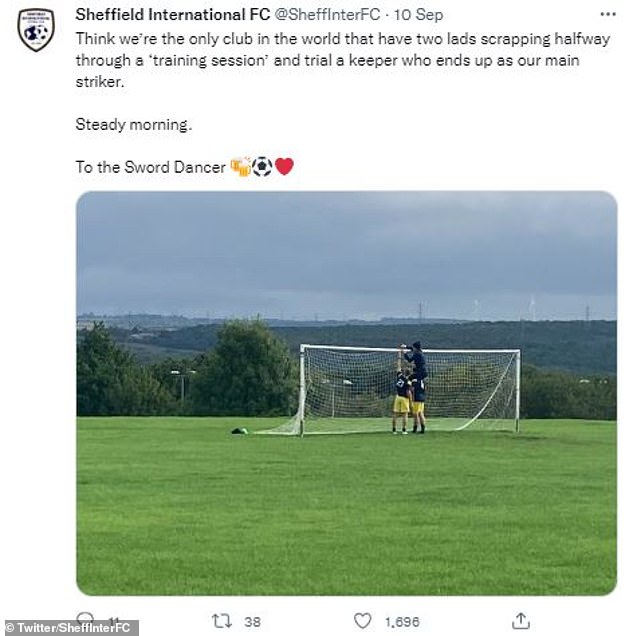 The move has been condemned by the Sheffield and District Fair Play League, which said: ‘It has been brought to our attention that, despite our clearly informing all clubs that football matches this weekend should be cancelled as a mark of respect for the passing of Her Majesty the Queen, two teams within our League have chosen to play a friendly match anyway.

‘This is after we specifically and separately confirmed friendly matches could not be played.

‘The SDFPL Management Team would like to put on record that we absolutely do not condone this disrespectful and despicable behaviour.

‘There will be an investigation into this matter, in conjunction with the Sheffield & Hallamshire County FA, and these two teams will be dealt with in the strongest possible terms.

‘Our league has honesty, integrity and fair play as cornerstones, and we will not accept such behaviour from within our ranks.

‘We would like to thank our 37 other clubs that followed the instructions and showed their respects with honour.’

Danny Taylor, chairman of the league, added: ‘Queen Elizabeth II ruled, served and led with integrity and humility for more than seven decades.

‘It is a terrible shame that these two teams could not emulate this even for a single Saturday, despite our clear instructions.

‘We may or may not agree with the mass cancellation of football, but this was decided as a mark of respect and should therefore have been adhered to.

‘This sort of behaviour is disrespectful, unacceptable and flies in the face of the core values of our League. It will not be tolerated.’

The FA made the decision to cancel all football matches in England over the weekend after Queen Elizabeth II died on Thursday, September 8, at Balmoral Castle in Scotland.

The move was criticised by many on social media, who pointed out that other sports including cricket, rugby, golf, horse racing and events such as the Great North Run, were going ahead as planned with silences held and black armbands worn. 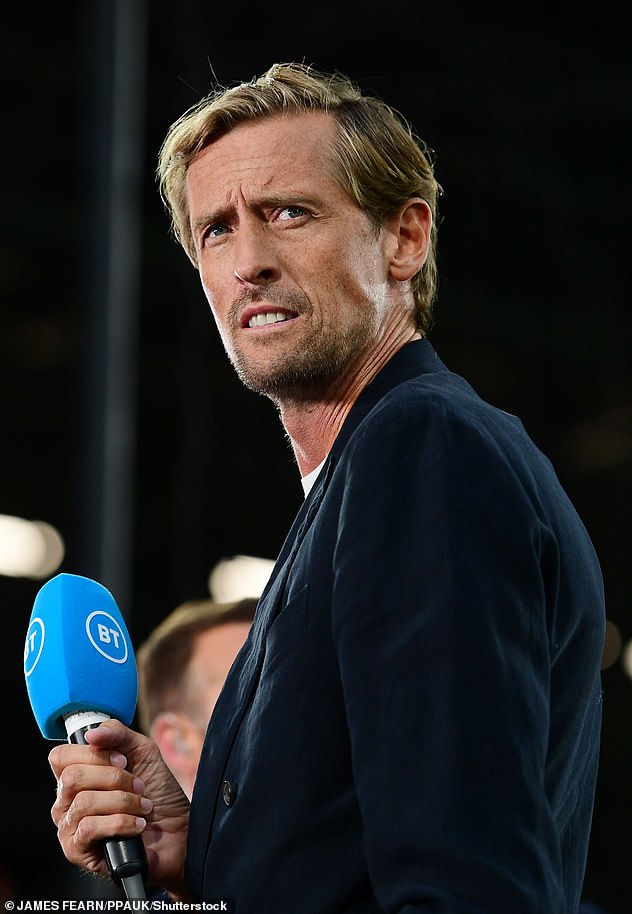 Former England footballer Peter Crouch has criticised the decision, and said that football matches could have been a place for Brits to come together 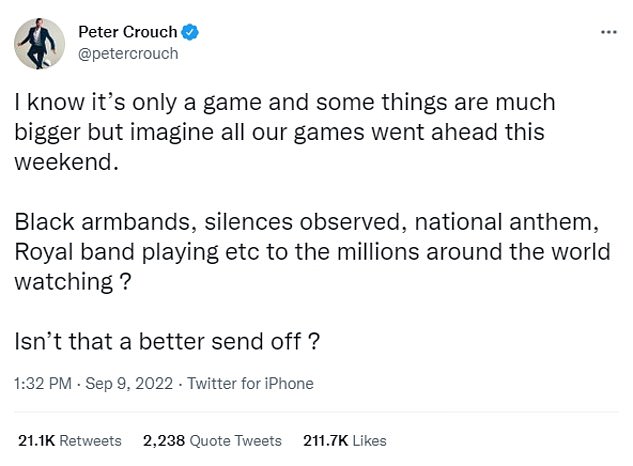 Many those criticising the FA’s decision said similar scenes should have taken place at football matches across the country over the weekend.

Among those was former England striker Peter Crouch, who tweeted: ‘I know it’s only a game and some things are much bigger but imagine all our games went ahead this weekend.

‘Black armbands, silences observed, national anthem, Royal band playing etc to the millions around the world watching? Isn’t that a better send off?’

Fans’ group The FSA told football authorities the cancelled fixtures were a missed opportunity for fans to pay tribute to the Queen ahead of kickoff.

‘So, all football matches were cancelled this weekend, reportedly as a mark of respect for the Queen,’ one critic said. ‘Meanwhile, cricket, rugby and golf continued as normal. A huge error by the FA. No surprises there.’

‘Seems like everything from cricket to the Great North run is going ahead this weekend but football in cancelled,’ another said.

‘Tributes at football matches are up there with the best in sport – I personally feel the game is missing a great opportunity to celebrate the Queen’s life.’ 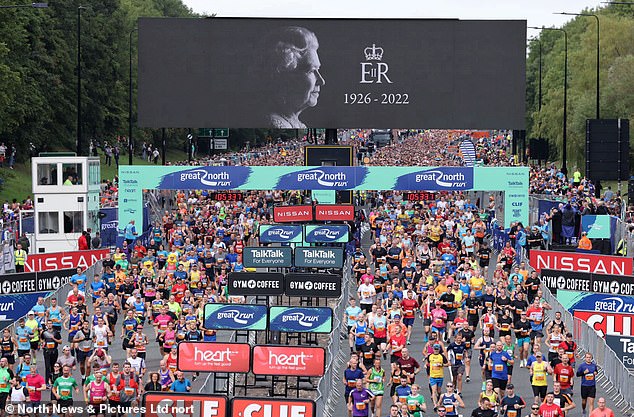 The Great North Run, the world’s biggest half marathon, was held in a ‘subdued’ form on Sunday September 11

A spokesperson for the FSA said: ‘We believe football is at its finest when bringing people together at times of huge national significance – be those moments of joy or moments of mourning.

‘Our view, which we shared with the football authorities, is that most supporters would have liked to go to games this weekend and pay their respect to the Queen alongside their fellow fans.

‘Not everyone will agree, so there was no perfect decision for the football authorities, but many supporters will feel this was an opportunity missed for football to pay its own special tributes.

‘As usual, the Football Supporters’ Association will be collating advice about supporters’ entitlements regarding expenses incurred relating to postponed games this weekend.’

However, high profile fixtures including Chelsea vs Liverpool and Manchester United vs Leeds have been postponed as police resources are being focused elsewhere in the lead up to Her Majesty’s funeral on Monday, September 19.