China has committed human rights violations, breaches of international obligations, and cyber espionage under the “cult of the new red emperor”, said former Australian prime minister Tony Abbott, in a speech that marked a stark turnaround for a leader who once wanted to be a “true friend of China”.

Abbott, who led negotiations over a China-Australia free trade deal while he was prime minister between 2013 and 2015, used a speech at the Taiwan Yushan regional security forum on Friday to unload on the leadership of President Xi Jinping and accuse Beijing of bullying, self-generating belligerence and to warn it could “lash out disastrously very soon”. 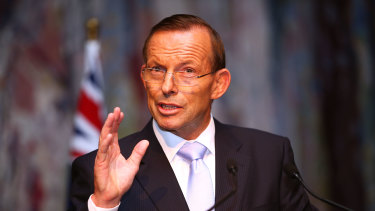 “Our challenge is to try to ensure that the unthinkable remains unlikely; and that the possible doesn’t become the probable,” he told diplomats, politicians and business leaders at the annual forum in the capital Taipei.

China regards the democratic island of Taiwan as its own and has vowed to unite it with the mainland over the coming decades by force if necessary. Beijing has launched more than 100 warplanes including fighter jets and nuclear bombers towards Taiwan over the past week, threatening its airspace and forcing Taiwan to scramble jets in response.

“I don’t think America could stand by and watch Taiwan [be] swallowed up,” said Abbott. “I don’t think Australia should be indifferent to the fate of a fellow democracy of almost 25 million people.

“Taiwan will be the test.” 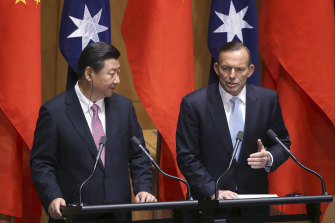 The consensus among military analysts is that the probability of war will not increase significantly until the 2030s when China’s military capability matches that of the United States.

Abbott said that two years ago he hesitated to attend the Yushan conference lest it provoke China. No Australian prime ministers have had an official trip to Taiwan since Harold Holt visited in 1967 for that reason.

“But since then, Beijing has torn-up the ‘one country, two systems’ treaty on Hong Kong; put upwards of a million Uighurs into concentration camps; boosted cyber spying on its own citizens; cancelled popular personalities in favour of a cult of the new red emperor; brutalises Indian soldiers in the Himalayas; coerced other claimants in its eastern seas, and flown evermore intimidatory sorties against Taiwan,” said Abbott.

“It’s weaponised trade, especially against Australia, with our barley, wine and coal exports all stopped on spurious safety grounds, and its embassy has published 14 demands – essentially that we become a tributary state – that no self-respecting country could accept.”

Abbott’s comments will put the Morrison government in a difficult position as it navigates Beijing’s trade and diplomatic sanctions after two years of disputes over national security, business investment and human rights. Abbott was welcomed by Taiwanese President Tsai Ing-wen at her presidential office and by Foreign Minister Joseph Wu. He was accompanied by Australia’s top representative in Taiwan, Jenny Bloomfield, on his trip as a “private citizen”.

Abbott said that as prime minister he was prepared to join the Chinese-led Asia Infrastructure Investment Bank because he thought that would help to give China a stake in a rules-based global order. He said the Chinese economic miracle in lifting half a billion people out of poverty was the “greatest and fastest advance in human well-being in all history”.

“For Beijing, surely there’s a lesson here: the more freedom its people have, the better they’ve done; and the more respect China has gained,” he said.

“Be a friend that experience shows, and you’ll have friends; be a bully, and you’ll only have clients, who can’t wait to escape.”

Abbott said Taiwan was not the world’s only potential flashpoint: “there’s Israel, never-not under existential threat; and Ukraine, menaced by the new tsar” – a reference to Russian President Vladimir Putin – “but nowhere is the struggle between liberty and tyranny more stark than across the Taiwan Strait,” he said.

Tsai, who addressed the forum ahead of Abbott on Friday, thanked the former prime minister for travelling to Taipei and for his support of Taiwan.

Tsai said on Tuesday that “Taiwan will not bend to pressure”. “They should remember that if Taiwan were to fall, the consequences would be catastrophic for regional peace and the democratic alliance system,” she said.

The President on Friday revealed she would establish “a coast guard working group, with the United States”, a move that could heighten tensions with Beijing across the Taiwan Strait where it has placed armed Chinese coast guard patrols.

“This working group will improve communication and information-sharing between the US and the Taiwan coast guards also facilitate cooperation with shared objectives,” she said.

US Defence Department sources briefed reporters from the Wall St Journal and Reuters on Friday that small numbers of US special operations forces have been rotating into Taiwan on a temporary basis to carry out training of Taiwanese forces. The anonymous briefings appeared to repeat reports from May and November 2020 at a time of increased tension between China and Taiwan ahead of Taiwan’s national day on October 10.