WASHINGTON — President Trump’s Twitter megaphone may be silenced, but his administration’s disinformation flows on.

David Legates, a climate denialist installed last year by the Trump administration to oversee scientific work on climate change, has posted a series of debunked reports that appear to claim to represent research on global warming produced for the United States government, drawing a disavowal from the White House science office.

His reports do not appear on a government website but a private one that espouses climate denial. However, they do bear the logo of the executive office of the president and purport to be the copyrighted work of the White House Office of Science and Technology Policy representing “the current state-of-the-science” on climate change.

The response from the White House science office was swift.

“These papers were not created at the direction of the White House Office of Science and Technology Policy nor were they cleared or approved by O.S.T.P. leadership,” Kristina Baum, a spokeswoman for the office, said in a statement on Monday night.

The papers include long-discredited claims that climate change is occurring naturally; that the sun, not human-caused pollution, is responsible for recent warming; and that the effects on the planet, if any, from climate change will be minimal. William Happer, a physicist who has likened the focus on carbon dioxide to the “demonization of the poor Jews under Hitler” is one of the featured authors. Wei-Hock Soon, known as Willie, an astrophysicist whose work downplaying the risks of greenhouse gas emissions was funded by the fossil fuel industry, is another.

Mr. Legates’s gambit appears to be a rogue effort by some of the most extreme elements of Mr. Trump’s administration to put the imprimatur of the federal government on research that aims to undermine the established science of climate change. Doing so, many denialists have openly acknowledged, could give greater weight to such studies when they are submitted in lawsuits, congressional testimony or even the next National Climate Assessment, the government’s premier contribution to climate knowledge.

According to a Trump administration official and an outside adviser, both with knowledge of the effort, officials at the White House Personnel Office asked Mr. Legates last year to compile a set of research for Mr. Trump in what was supposed to be an internal project. Mr. Legates currently serves as head of the United States Global Change Research Program, which oversees the National Climate Assessment. Kelvin K. Droegemeier, the president’s chief science adviser and director of the White House science office, was not aware of the project, according to the two people, who spoke on the condition of anonymity because they were not authorized to speak publicly about the episode. 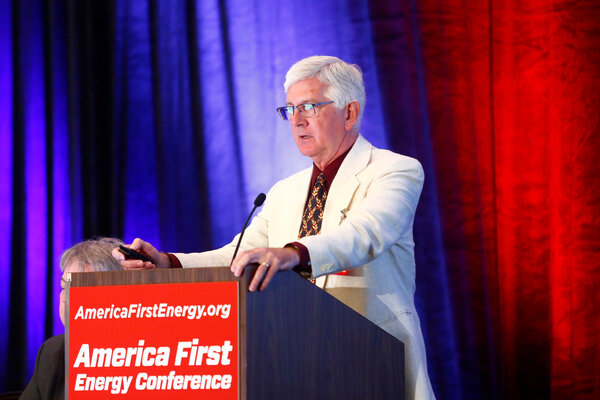 Dr. Roy Spencer, a climate denialist who wrote an article for the package entitled, “The Faith-Based Nature of Human-Caused Global Warming,” said in a blog post late Monday that Mr. Legates “hopes to be able to get these posted on the White House website by January 20,” presumably to make them part of the outgoing administration’s official record. But, he added, “there is no guarantee given recent events.”

Mr. Legates did not respond to a request for comment. Meantime, the legal implications of putting the studies on a private site while using the White House logo and copyright in an apparently unauthorized manner were unclear late Monday. Federal law states that anyone who “fraudulently or wrongfully” affixes the seal of any department or agency of the United States could face fines or jail time of up to five years.

John Holdren, who led the science office for President Barack Obama, said a spokeswoman’s disavowal of the disinformation effort was not enough.

“Kelvin himself needs to step up and forcefully denounce this farce committed in O.S.T.P.’s name,” he said.

Peter Gleick, a climate scientist and member of the National Academy of Sciences who noticed the posts and drew attention to them on Twitter, called them “ridiculous” and a ham-handed effort to grant a veneer of government respectability to junk science before President-elect Joseph R. Biden Jr. assumes office Jan. 20. He said he expected the studies to have no lasting policy implications.

“Possibly as part of the next National Climate Assessment someone will try to reference them as having some merit,” Dr. Gleick said. But, he added, “To climate science itself these pose very little danger because they are pseudoscience, because they are ridiculous, and because nobody serious in the scientific community will pay any attention to them.”

The papers appeared late last week on the site of the Center for Environmental Research and Earth Sciences, an organization associated with Dr. Soon.

In an introduction, Mr. Legates describes the papers as the “current state-of-the-science on various topics of climate change.” He called the papers fliers written by “top scientists from leading institutions” across the nation.

“The Office of Science and Technology Policy is pleased to bring you these briefs to further your understanding of climate change by learning from these learned scholars,” he wrote. The introduction identifies Mr. Legates as a professor of climatology at the University of Delaware rather than by his government title.

Many of the reports, scientists noted, are repackaged summaries of previously published papers. One of the papers is presented as being written by Ryan Maue, a senior official at the White House science office, who has downplayed the effects of climate change and the links between global warming and extreme weather events. On the site, Dr. Maue’s paper does not list his government affiliation but rather describes him as a “private sector meteorologist.” Dr. Maue could not be reached for comment.

Current and former federal officials involved with the National Climate Assessment expressed dismay that the papers would be presented as representing the Office of Science and Technology Policy.

The documents, they said, marked the latest low point in the Trump administration’s approach to climate science.