WASHINGTON — Lara Trump, the president’s daughter-in-law who emerged during the 2020 presidential campaign as a defender of President Trump’s basest political instincts, is now eyeing a political future of her own in her home state of North Carolina.

As Mr. Trump attempts to subvert the election to remain in power, Ms. Trump, three allies said, has been telling associates she is considering a run for Senate in 2022, in what is expected to be a competitive race for the first open Senate seat in a very swingy swing state in a generation. Senator Richard Burr, an unobtrusive Republican legislator who was thrust into the spotlight as chairman of a committee investigating the president’s ties to Russia, has said he will retire at the end of his term. Despite expanded turnout in rural areas, Mr. Trump won North Carolina by a smaller margin than he did four years ago, just 1.3 percentage points, a sign that overall the state is trending blue and that the race for the Senate seat will be tightly contested by both parties in the first post-Donald Trump election.

But not, perhaps, an entirely post-Trump election, if Ms. Trump proceeds.

Ms. Trump, 38, a former personal trainer and television producer for Inside Edition, wed Eric Trump at the family’s Mar-a-Lago estate in 2014 and worked as a senior adviser on the 2020 Trump campaign. Now, the daughter-in-law whom Mr. Trump had often joked to donors that he “couldn’t pick out of a lineup” is floating herself as the first test of the enduring power of the Trump name.

“She’s very charismatic, she understands retail politics well, and has a natural instinct for politics,” said Mercedes Schlapp, a Trump campaign adviser who traveled the country as a surrogate alongside Ms. Trump. “In North Carolina, in particular, she’s a household name and people know her. She worked really hard on the campaign and was very involved in a lot of decisions throughout.”

Much of the speculation about who might inherit the Trump mantle has focused on his eldest children, who have cultivated their own niche followings. Donald Trump Jr., the president’s eldest son, has the deepest connection with the online disinformation system that has fueled support for his father as well as with the Trump base that supports protecting the Second Amendment.

Ivanka Trump, the president’s eldest daughter and a White House official who focused on work force development, was deployed on the campaign trail to make the president more palatable to the suburban women who were turned off by his tone and his tweets. She generally steered clear of repeating her father’s ad hominem attacks on President-elect Joseph R. Biden Jr., or his son Hunter, or casting doubt on the integrity of the election.

But Ivanka Trump, people familiar with her plans said, is still deciding on whether to settle her family in New Jersey or Florida and has no immediate intention to pursue elected office herself. Donald Trump Jr., meanwhile, despite his talent for channeling his father’s id, may choose to forgo a run for office all together.

Eric Trump, the most low profile of the Trump siblings, has never cultivated a political spotlight, leaving the way clear for his wife.

Eric and Lara Trump currently live in Westchester, New York, with their two young children (their daughter, Carolina, is named after the state Ms. Trump is now eyeing). It’s not apparent that simply having the family backing would empty, or even diminish, the field in what is expected to be one of the most targeted seats in the nation where Republican candidates with experience in the state are already lining up.

There’s Representative Mark Walker, a Trump ally whom the president has encouraged to run for Mr. Burr’s seat, and indicated he would support. There’s Pat McCrory, the former governor, who has said he is eyeing the seat. Tim Moore, the North Carolina Speaker of the House, is said to be in the mix. And Dan Forest, who just lost a race for governor against the Democratic incumbent, Roy Cooper, is expected to be in the field.

And then there is another contender from the president’s inner circle, at least as it stands at the moment: Mark Meadows, the former North Carolina representative and White House chief of staff, is widely expected to move back home and run for the seat as well. Aides to Mr. Meadows declined to comment about his political future. 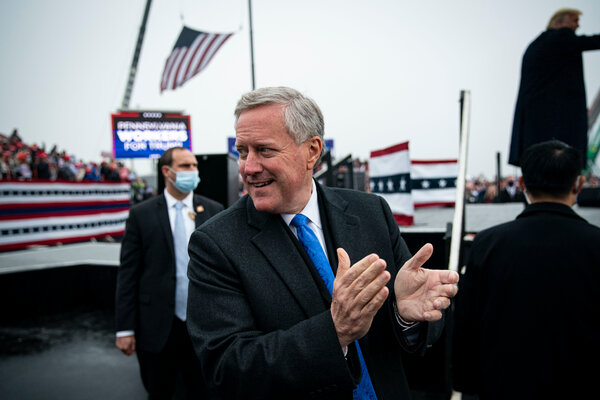 None of those more experienced candidates have the name recognition and the ability to raise big online cash that the president’s daughter-in-law, who has been cultivating her own profile with a campaign YouTube show and events across the country, has. “She would be formidable,” said Kellyanne Conway, a former White House official and the 2016 Trump campaign manager. “She has the trifecta: She can raise money, raise awareness of key issues and raise attention to her race. Unlike many typical politicians, she connects with people and is a compelling messenger.”

Michael Watley, the chairman of the North Carolina Republican Party, predicted that the race would draw significant interest from a wide range of people.

“I think you’re going to need a dance card to keep everything straight,” he said.

Put more bluntly, Morgan Jackson, a Democratic strategist based in North Carolina said, “There are a lot of people ahead of Lara Trump in line. Given how rare it is that there’s an open seat, I don’t believe any of the folks who actually live in North Carolina and have been here will get out of the way for someone else.”

Ms. Trump, who spoke at the Republican National Convention, made many campaign stops in North Carolina this year. On the trail, she has been willing to go where surrogates like Ivanka Trump, seeking to soften the president, have not. Speaking on behalf of her father-in-law in her hometown of Wilmington, she echoed the president’s baseless attempts to undermine confidence in the election results. She said the system was “ripe with fraud,” and claimed that universal vote by mail “is not a good system, it’s never been tested.”

On CNN in October, she accused Mr. Biden of suffering from a severe “cognitive decline” and batted away questions about Mr. Trump encouraging violence on Michigan’s governor, Gretchen Whitmer, who the F.B.I. had recently said had been targeted by a kidnapping plot. Ms. Trump chalked up her father-in-law’s behavior as an example of someone simply “having fun at a Trump rally.”

Since Election Day, she has actively elevated conspiracy theories online about the election-equipment maker Dominion Voting Systems Inc., which the president has claimed, with no evidence, switched Trump votes to Mr. Biden’s column.

A former Trump aide, Omarosa Manigault Newman, claimed in a 2018 memoir that Ms. Trump had offered her a $15,000-a-month contract in exchange for silence about her time in the White House, and subsequently released a secret recording that Ms. Manigault Newman said supported that claim.

While the idea of another Trump testing the political waters was anathema to Republicans who wanted the party to move away from its current Trumpian identity, others have been trying to lure the next generation in.

The Club for Growth, an influential conservative anti-tax group, earlier this year commissioned a poll with Ms. Trump as a candidate for Congress representing New York’s second district.

David McIntosh, the president of Club for Growth, said at the time that the group simply polled her name to show there was a well of support and lure her into an open race.

In a hypothetical primary, the poll showed her winning by 30 points.