Washington DC (CNN Business)Efforts to clean house at the US Agency for Global Media continued this week as leadership indicated that international journalists who work for Voice of America (VOA) will not have their visas extended and a widely respected top editor at Radio Free Asia was fired, explained three sources familiar with the decisions.

Under the new leadership of Michael Pack, who took the job as USAGM’s CEO last month, the organization which oversees US-funded broadcasters VOA and RFA among others has been thrust into a wide-ranging shakeup which appears to be politically motivated.
With indications that Pack is not going to allow visas to be extended for international VOA journalists in the US, there are dozens of journalists who could face retaliation if they are forced to return to their home countries. 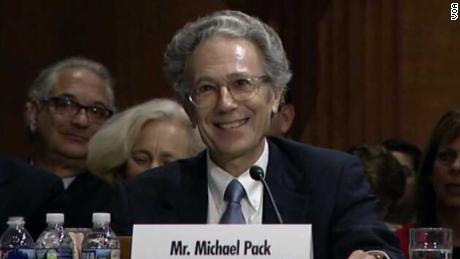 “People who do work for entities like VOA or RFA are putting their lives at risk by reporting inside terrible places and in some cases they have been able to work with State to get special visas to do their work,” said a source familiar with the potential decision. If these journalists are sent home “no exaggeration they could easily face death, imprisonment, and definitely harassment, for the reporting they have done.”
There is one journalist at VOA from China whose visa will expire at the end of July, two sources said, raising fears about retaliation from Chinese authorities if that journalist is force to leave the US.

“I am just kind of astonished by all of this,” the source said. “The US could end up with the blood of hard working journalists on their hands if they do this.”
VOA’s charter says that it will present “accurate, objective, and comprehensive” news. It also says it will present America, the policies of the US and ” responsible discussions and opinion on these policies.” VOA was signed into law in 1976, while USAGM was founded in the late 1990s to be the leadership body for five US broadcast networks. All of the networks are independent from the US government, even though they are funded by the government.
The Trump White House has long been frustrated by VOA’s coverage, which they view as overly critical of Trump. Trump’s outside allies such as Steve Bannon, who is close with Pack, railed on the organization. Earlier this year the White House made its concerns public, saying that VOA “too often speaks for America’s adversaries—not its citizens,” in an online post. The post went after VOA — funded by US taxpayer dollars — for comparing the coronavirus pandemic’s death toll in the US to the death toll in China.
These moves come as the Trump administration has lambasted the Chinese government’s control over Chinese media companies, and has taken moves to require Chinese outlets in the US to label themselves as foreign missions in recent months.
“While the Chinese Communist Party has always controlled state news agencies, its control has tightened,” said David Stilwell, the top State Department official for East Asian and Pacific affairs. “You can’t just allow this stuff.”
Radio Free Asia’s top editor Bay Fang, who was let go on Wednesday, was an experienced and well-respected journalist. Her ouster is the latest in a series of high-profile ousters and resignations of USAGM employees since Pack has taken over leadership.
Last month a group of bipartisan lawmakers demanded answers from Pack after a firing spree. USAGM in a press release the next day described it as “Pack (effecting) a series of significant and long-overdue actions to keep assurances to restructure the agency, fully in accordance with the law.”

Fang’s firing is somewhat inexplicable to current and former employees at RFA who noted the organization’s journalists, under her leadership, broke the story that thousands of Uighurs were being detained in China’s Xinjiang province. The Trump administration has repeatedly criticized the Chinese government for its gross human rights abuses in Xinjiang. But some former staffers believe that Fang’s ouster is in line with Pack’s efforts to carry out widespread changes and fill the broadcasts with people who are aligned with President Trump, even though no one has been named to replace her.
“By ordering Bay Fang’s firing, Michael Pack has somehow managed to simultaneously hurt Radio Free Asia’s vital mission while helping authoritarian regimes in places like China and North Korea,” said Steve Capus, a former senior advisor at USAGM who was among those dismissed by Pack. “Bay is exactly the kind of leader you’d want helping to run an organization like Radio Free Asia, as it serves millions of people around the world hungering for accurate, trusted and vital news and information.”
Pack “does not want people around who would push back on using the platform as a PR tool for the Trump administration,” another source familiar with the ouster said.

Fang is known to have a close relationship to Matthew Pottinger, who is the deputy National Security Advisor, two sources said. Pottinger is said to have privately raised objections about the firings that Pack has carried out. But it is unclear if Trump administration officials will be willing to go out on a limb to question Pack’s decisions.
USAGM, the State Department and the NSC did not reply to a request for comment.
Source: Read Full Article

Tags: reporters at Voice of Amer, Why