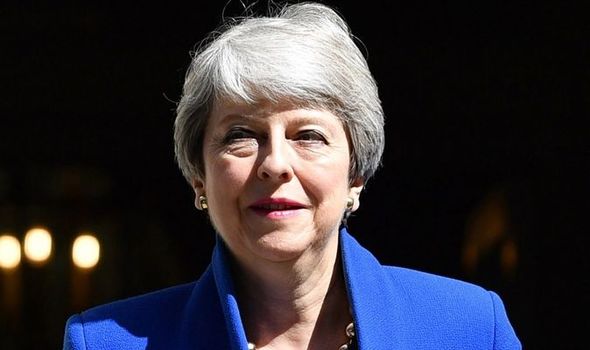 The former prime minister has described how her upbringing in a vicarage shaped her attitude to public service and she will now champion the needs of church ministers and their families as honorary vice president of the Clergy Support Trust.

Her father, Hubert Brasier, who died in a car crash in 1981, was chaplain of All Saints’ Hospital, Eastbourne, and then served as a vicar in Oxfordshire.

Mrs May said: “Growing up in a vicarage, I saw first-hand the myriad ways in which the clergy support our local communities.  I know how seriously our clergymen and women take their responsibilities and so I’m delighted to be able to play a part in the trust’s work supporting them and their families, not just throughout the course of their ministries but also in their retirement.”

In a 2016 interview, Mrs May described how she accompanied her father on his visits in the wake of a local tragedy.

She told a Sunday newspaper: “I remember one Christmas there had been a great car crash and a couple of families in the village had lost members of their families. That Christmas Day, after he’d done his services, my father went out and visited them and took them presents.

“I was about nine at the time, and because he was out doing his job, visiting those families, I didn’t get my presents until six o’clock in the evening.”

The future PM grew up in the village of Church Enstone, and in subsequent decades she has highlighted the continuing importance of her faith. In a 2017 Easter address she said that we “must continue to ensure that people feel able to speak about their faith, and that absolutely includes their faith in Christ.”

More than 1,300 households received help from the 367-year-old charity last year and this July monthly applications of help hit an all-time high with more than 400 requests.

Other high-profile figures who have this year joined the trust as honorary vice presidents are Baroness Hale of Richmond, the former president of the Supreme Court, who in 2019 delivered the verdict that Boris Johnson had acted unlawfully when advised the Queen to suspend parliament; Lord Lisvane, the former clerk of the House of Commons; Battersea Labour MP Marsha de Cordova who is the vice-chair of Christians in Parliament; and former trade minister Lord Green of Hurstpierpoint, chair of the Friends of the Anglican Communion.

Baroness Hale said: “I am steeped in the Church of England. My grandfather attended the Clergy Orphans School in Canterbury; my father was a lay reader; and my mother ran the local Mothers’ Union. I love the breadth of the Church of England, which can embrace both the Anglo-Catholic tradition and the more Pentecostal style of worship.”

Lord Lisvane added: “My wife is a non-stipendiary priest in a rural multi-church benefice in Herefordshire and she, like many others, is balancing the needs of parishioners with caring for ancient buildings and managing the church finances.”

Lord Green said: “One of the brilliant parts of Clergy Support Trust’s work is its encouragement for often much needed rest and recuperation. I want to do what I can to ensure that clergy and their families get this support.”

Ms De Cordova said: “They also help clergy partners, children, widows and widowers in times of need, ensuring the whole family is cared for and affirmed.”

Canon Simon Butler, who chairs the Clergy Support Trust, said: “The support of such esteemed public figures as our new honorary vice-presidents is such a blessing. Their joining comes at a pivotal moment in the charity’s 367-year history, a time when the needs of clergy and their families have perhaps never been greater, as communities up and down the land look to clergy and the Church for support.”