But EU Brexit negotiator Michel Barnier immediately called Britain’s departure as a failure for the bloc. The 27 remaining members have refused to compromise on new arrangements that hit the flow of goods to Northern Ireland. Britain is instead holding off from imposing all post-Brexit checks in the region to ease tensions. Ms von der Leyen said there was a need for “joint solutions” as “unilateral decisions will get us nowhere” – and warned there are mechanisms in the agreement that have “real teeth”.

The European Commission president added: “We do not want to have to use these tools. But we will not hesitate to use them if necessary.”

The deal has been applied provisionally since January 1 but was only voted on by MEPs last night.

The result will be formally announced today.

Ms von der Leyen said: “The choice is whether today’s vote will be the high watermark of the EU-UK relations for the next decades, or whether we see this as the foundation of a strong and close partnership based on our shared values and interests.”

Relations between the UK and EU have been strained over the application of the Northern Ireland Protocol, drawn up in the withdrawal agreement to stop a hard border.

Ms von der Leyen reported progress in talks between the bloc and Britain. But she added: “We need solutions, not soundbites, if we are to make the protocol work for the benefit of everyone in Northern Ireland.” 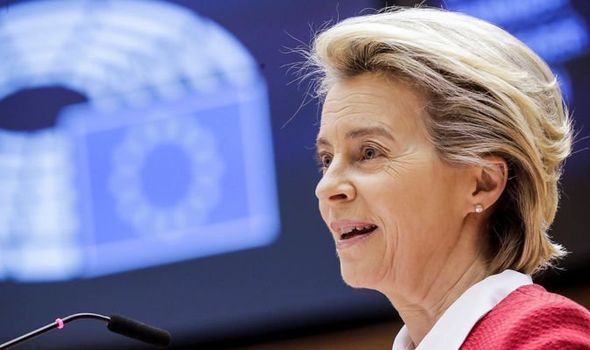 However, Mr Barnier said: “This is a divorce. It’s a warning, Brexit, and it’s a failure – a failure of the EU. And we have to learn lessons from it.

“Why did 52 percent of the British vote against Europe? There are reasons – social anger and tension which existed in many regions in the UK but also in many regions of the EU.

“Our duty is to listen and understand the feelings of the people.”

A UK Government spokesman said the deal gives it the power to tackle the EU if it fails to follow obligations now Britain is a “sovereign equal”.

He added: “Importantly there is no role for the European Court of Justice in resolving disputes.”