Figures from the Office for National Statistics (ONS) found at the end of May 2021, the Government spent £24.3 billion – pushing national debt to £2.2 trillion. May’s monthly spend was the second-highest figure on record, however, was less than previously predicted by the Office for Budget Responsibility (OBR) forecast. Despite this, experts are warning of a “big risk” of inflation and a hike for some taxes to compensate.

Economists had on average expected a shortfall of £26.0 billion for May 2021.

At the peak of the coronavirus pandemic, and exactly a year ago in May 2020, the Government was in the red by £43.8billion for the month.

While May 2021 has seen a drop in spending as the UK recovers from the crippling impact of numerous lockdowns, the figure is still £18.9 billion more than in May 2019.

Read More: What is the CPTPP? Why post-Brexit trade deal could be a MAJOR boost 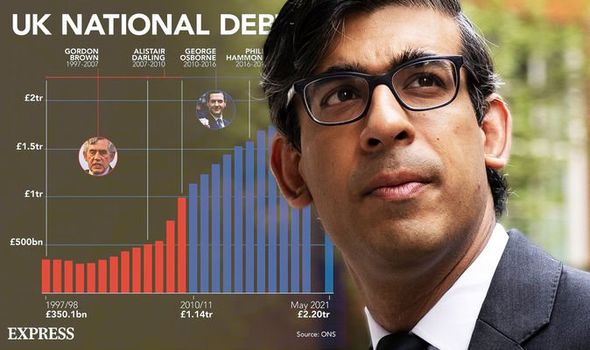 National debt now stands at a staggering £2.2trillion, which is approximately 99.2 percent of GDP.

This is the highest ratio since the 99.5 percent of GDP recorded in March 1962.

In total, at least 50 schemes have been unveiled by the UK Government and devolved administrations to aid individuals and businesses during and after the pandemic.

The extra money needed to bolster the coronavirus support schemes is part of the reason behind soaring spending. 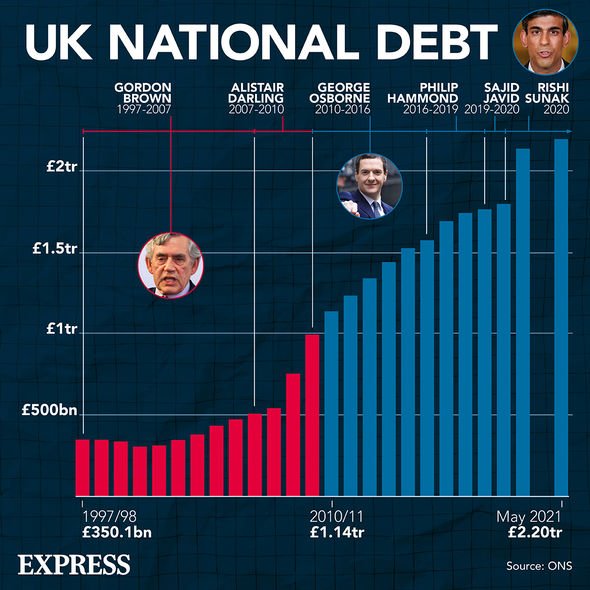 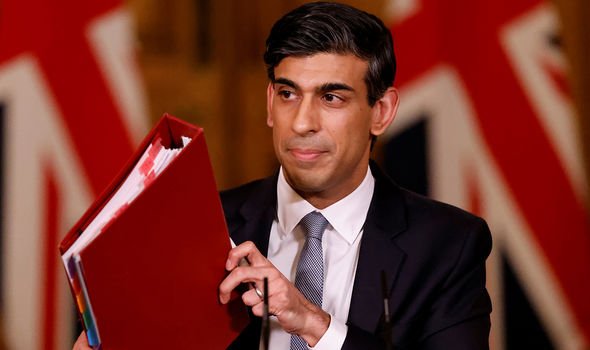 The ONS explains: “The extra funding required to support government coronavirus support schemes combined with reduced cash receipts and a fall in gross domestic product (GDP) have all helped push general government gross debt as a ratio of GDP to more than 100 percent of GDP, and around two-and-a half times higher than the financial year ending March 2008, the year of the global financial crisis.”

Now Chancellor for the Exchequer Rishi Sunak has promised to “get the public finances on a sustainable footing”.

In response to May’s figures, Mr Sunak said: “That’s why at the Budget in March I set out the difficult but necessary steps we are taking to keep debt under control in the years to come.”

The drop in comparison to last year and May’s spending being less than the OBR’s prediction has given hope as the UK emerges from lockdown.

Capital Economics said: “The strong economic recovery is starting to feed through into lower government borrowing.

“This reinforces our view that the tax hikes and spending cuts that most fear may be avoided.”

However, former chancellor Lord Kenneth Clarke has cautioned there is a “big risk” of inflation over the next few years. 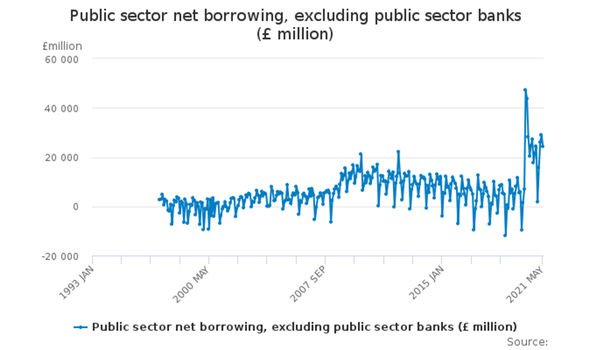 He told BBC Radio 4’s Today programme: “Unless we actually take care, inflation is now the big risk over the next few years.

“These are such unusual circumstances that no-one is quite sure how big the risk is, nor when the crunch will come, but it’s now time to start addressing the serious problem of the huge debts we have run-up, which we had to run up – that was perfectly OK to stop the economy collapsing when Covid hit it – and try to make sure that we can tolerate a short little boomlet, with inflation going up for most of this year; we can act very promptly to control it once it’s obviously settled in.

“And also you have got to start addressing the serious question of how do we pay for this fantastic amount of borrowing in a sensible and responsible way in order to be able to maintain fiscal discipline in future.”

And Mr Sunak could implement measures sooner rather than later, with The Sunday Times reporting he was considering blocking the automatic Triple Lock increase of nearly six percent to pension payments.

He said: “We still think that the government will have to stick to plans to hike corporation tax in 2023 and to increase the effective income tax rate by freezing existing thresholds, if it wants to ensure that public borrowing declines below four percent of GDP in the mid-2020s.”

Mr Tombs said figures from April and May have been helped by the delay in recording of a payment to the European Union.