President Trump is not known for his sweet tooth, but on his way to  Hershey, Pennsylvania, for a rally Tuesday night he professed himself to be a chocolate lover and of the iconic American brand.

The tweet prompted some not-so-sweet comments about Trump, naturally, but also had others expressing their devotion to the chocolatier.

HERSHEY REDESIGNS CHOCOLATE BAR FOR THE FIRST TIME IN 125 YEARS

Trump has had several experiences with Hershey's while in the White House. In 2017, the company's Kisses were handed out to children at the White House during Halloween in special presidential boxes. Some of those boxes are seen as collector's items and are up for grabs on auction website eBay.

Ironically, those Kisses would become a concern for Hershey because of tariffs and the trade war. Tariffs of 10 percent on aluminum, partly used in the candy's silver wrapper, were announced by the Trump administration on March 8, 2018. 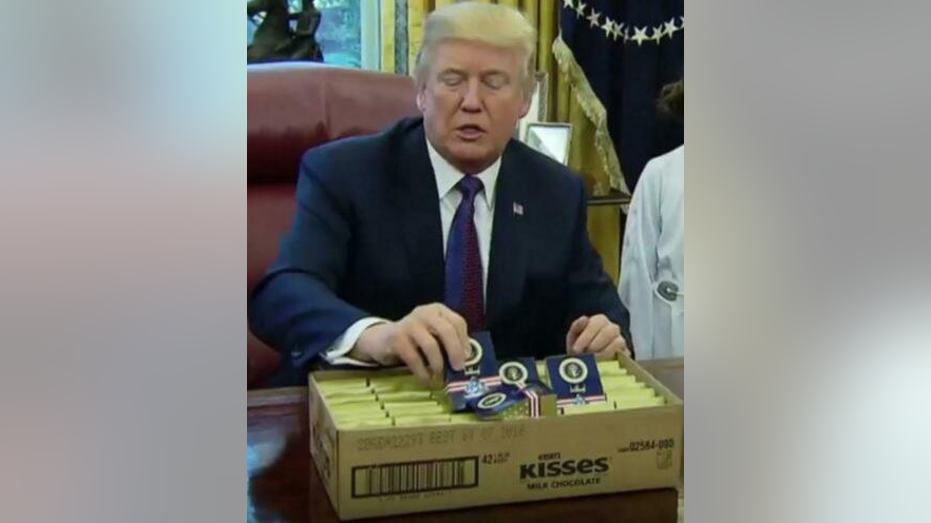 President Trump in 2017 with the White House special edition Kisses

A Hershey's spokesman told Pennsylvania's Allentown Morning Call that such a move could hurt "consumers through higher prices." But one analyst noted a few months after Trump's tariff's announcement that "Hershey’s has decided to attack the cost from several angles — for example, by focusing on packaging design."

Ironically, the tariffs preceded by a few months Hershey's exit from China. In 2014 it paid more than $500 million for candy maker Shanghai Golden Monkey Food Co. Ltd.  But after four years of slowing sales and reported cultural issues, Hershey's sold the company to a Chinese food concern.

Hershey's surfaced again at this year's trick-or-treat gathering at the White House, when Trump had a viral moment that included a Hershey's chocolate bar and a character dressed as a Minion from the animated movie "Despicable  Me."

Meanwhile, Hershey's stock is already up nearly 40 percent year to date. It could possibly see a bit more of a bump with a planned new brand extension: breakfast cereal.

No official release date has been set, but Hershey's Kisses cereal — from General Mills — has been spotted on the shelves of several supermarkets. The pieces of cereal are shaped exactly like the iconic chocolate.

This is not the first Hershey's tasty treat to be turned into a breakfast cereal. General Mills and Hershey's teamed up for a crunch version of Hershey's Cookies and Creme Bar.

In October for its third-quarter earnings, the company behind Reese's Peanut Butter Cups, Kit Kat and Whoppers, Hershey earned $1.61 per share on revenue of $2.13 billion topping analyst projections of $1.60 per share and revenue of $2.12 billion.

Hershey also boosted its full-year revenue forecast up to 2.5 percent from a previous estimate of 2 percent, which would mean the candy giant would take in about $7.99 billion.

FOX Business' inquiries to Hershey on Trump's tweet were not immediately returned.

3 Reasons Why the Crypto Market is Crashing Today
Latest Posts

54th annual Variety Show of Hearts Telethon on Global BC

Is the Okanagan prepared for the coronavirus?

‘Sasquatch spotted’ in grainy footage taken in snow-covered mountains… but is it all a hoax? – The Sun

Jamie Dimon Gets $31.5 Million for JPMorgan’s Knockout Year
We and our partners use cookies on this site to improve our service, perform analytics, personalize advertising, measure advertising performance, and remember website preferences.Ok