The Trump Justice Department secretly obtained phone records of Washington Post reporters in 2017 as part of a leak investigation amid the Russia probe.

The top official in the Justice Department’s National Security Division is stepping down and will depart his post by the end of the month, amid revelations that the Trump DOJ pulled communications records of sitting members of Congress and reporters.

John Demers, who, under the Trump administration served as assistant attorney general for National Security, is resigning.

Justice Department officials told Fox News that Demers has long planned to step down to spend more time with his family. His last day will be June 25.

Last week, reports indicated that the Justice Department had secretly subpoenaed Apple in 2018 for metadata from House Intelligence Committee Chairman Adam Schiff and another Democratic member of the committee, Rep. Eric Swalwell, as the panel was leading its own investigation into whether members of the Trump campaign colluded with Russia to influence the 2016 presidential election.

Meanwhile, Demers has been in charge of the department’s national security division since February 2018, being sworn in a few weeks after the subpoena was issued to Apple for the Democrats’ records, and his division has played a role in each of the leak investigations. 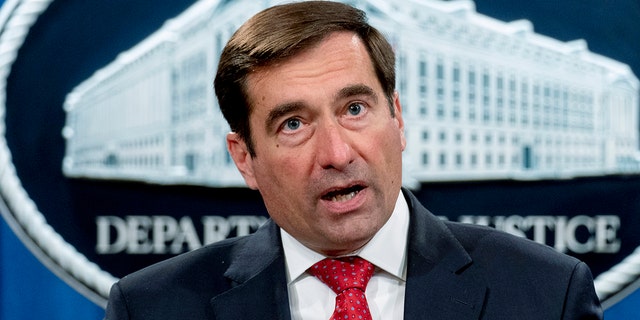 Attorney General Merrick Garland said there are “important questions” that must be resolved related to the efforts to collect information belonging to members of Congress and staff, and confirmed he asked the department inspector general to investigate the issue.

“As I stated during my confirmation hearing, political or other improper considerations must play no role in any investigative or prosecutorial decisions. These principles that have long been held as sacrosanct by the DOJ career workforce will be vigorously guarded on my watch, and any failure to live up to them will be met with strict accountability,” Garland said in a statement Monday. “There are important questions that must be resolved in connection with an effort by the department to obtain records related to Members of Congress and Congressional staff.”

Garland said he “will not hesitate to move swiftly” if action is warranted.

Justice Department Inspector General Michael Horowitz on Friday said the review “will examine the Department’s compliance with applicable DOJ policies and procedures, and whether any such uses, or the investigations, were based on improper considerations.”

It was a rare confirmation by the IG that his office had initiated a review. Traditionally, the DOJ’s Office of the Inspector General only communicates with the public upon the completion of an investigation.

“I applaud the decision of the Attorney General to request an Inspector General investigation, and the IG’s commitment to proceed and probe the abuse of the department’s investigatory powers against Congress and the press,” Schiff said in a statement.

Garland also noted Monday that he has “instructed the Deputy Attorney General, who is already working on surfacing potentially problematic matters deserving high level review, to evaluate and strengthen the department’s existing policies and procedures for obtaining records of the Legislative branch.”

“Consistent with our commitment to the rule of law, we must ensure that full weight is accorded to separation-of-powers concerns moving forward,” Garland said.

Demers will be replaced by Mark Lesko, the acting U.S. attorney in the Eastern District of New York, according to The Associated Press.