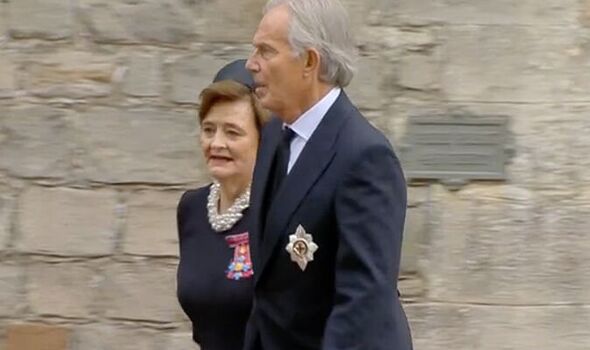 Sir Tony Blair wore his Order of the Garter today as he said goodbye to Queen Elizabeth at her funeral.

The honour could be seen proudly on display attached to his suit jacket as he entered St George’s Chapel at Windsor Castle.

The Order of the Garter was first created in 1348 and is the highest form of knighthood available, with only the Victoria Cross and the George Cross holding a bigger status in the British honours hierarchy.

The former Prime Minister was only given his knighthood in January as part of the Queen’s penultimate honours list.

Some have claimed that Sir Tony and the late Queen did not get on well.

There have been repeated claims that the former Labour leader was made to wait until 15 years after he left No10 to receive his knighthood because of the uneasy relationship the two shared.

Sir Tony Blair was Queen Elizabeth II’s 10th Prime Minister and was in Downing Street and helped secure the monarchy during its worst crisis in her reign.

When Princess Diana died in a car accident in Paris on August 31 1997 the Royal family struggled to respond and match the shock and sadness of the nation.

It was a rare misstep during the Queen’s reign of more than seven decades.

The former Labour Prime Minister, who had only been in office a few months, persuaded the Royal family to fly the standard at half mast and for the Queen to give a statement to the nation and world.

Princess Charles, William and Harry then joined the funeral procession.

“She had two grandchildren who had lost their mother in difficult circumstances.

“In the end she understood because always her duty came first, that she had to respond to the extraordinary outpouring of grief at the passing of Diana.

Sir Tony recalled having last seen Her late Majesty just a few months ago for lunch.

“She was on great form, she had problems with her leg so physically she was obviously frail,” he said, remembering the last meeting.

“But in terms of how she was she was in amazing form, warm and humorous.”

He noted: “She kept a very keen and sharp eye on the country, how it was changing, what it’s people thought, right up to the end.”

He also said that people often ask him what her politics were.

“I say I really don’t know. She was above it, above politics.

“When I first became Prime Minister she said to me: ‘My first prime minister was Winston (Churchill) and that was before you were born.’

“She had this extraordinary grip on history.”

Rejecting suggestions that they did not get on, he added: “She was always gracious in private and exuded this sympathy and understanding that whatever face you were putting on underneath three was a lot of turmoil and anguish.”