CHESTER, S.C. — It was 9:30 a.m., the day before the New Hampshire primary, when Democratic presidential candidate Tom Steyer leaned in close to the African American man sitting across from him at a diner and asked, “Would you say we’re still fighting the Civil War?”

“I do,” said Steyer, a California billionaire and liberal activist, remarking on the Confederate symbols he’d seen along the roads of South Carolina.

As his fellow Democratic presidential candidates made their closing arguments in New Hampshire, Steyer had the state of South Carolina to himself. Steyer received 0.3 percent of the vote in Iowa, and he finished in sixth in New Hampshire.

South Carolina and Nevada are the places the billionaire activist hopes will put him on the map. Though he’s still considered a long shot to win, two polls that showed Steyer in second and third place in South Carolina made people sit up and take notice.

Even if he doesn’t win, Steyer could stand in the way of former Vice President Joe Biden winning in a total blowout. Biden has long bet that South Carolina will be his firewall.

If Steyer succeeds, he could alter the course of the Democratic primary.

Two weeks out from South Carolina’s Feb. 29 primary, Steyer was at once a familiar face and a complete unknown to patrons at Gene’s Restaurant, a popular diner in this small, majority-African American city. 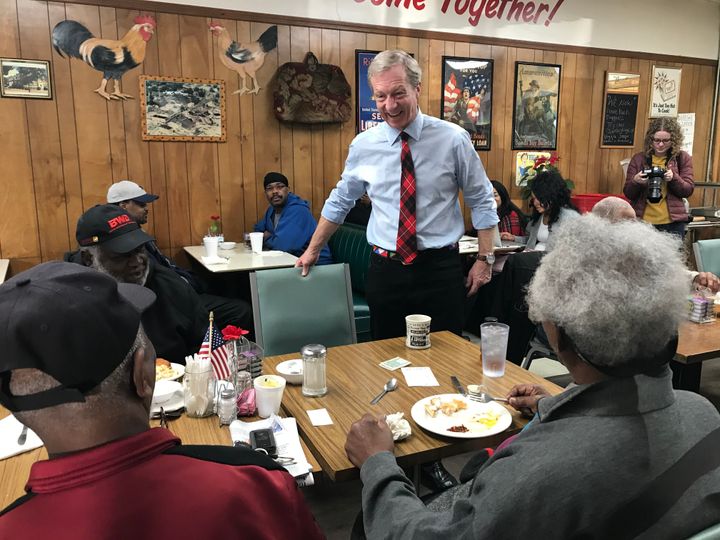 For months, Steyer’s campaign has blanketed the airwaves in South Carolina, spending $14 million in TV and radio ads in the state. Loretta Brown, a 67-year-old Chester resident, said she gets two or three brochures from the Steyer campaign every week. Asia Turner, a 21-year-old college student from Chester, didn’t even know Biden was running, but she’d heard of Steyer from his yard signs.

They just didn’t know much else about him.

That sentiment was true everywhere Steyer went during his weekend swing through the state. Those who came to his campaign events wanted to see if he lived up to his commercials in person — and most left feeling he does.

“Tom’s the real deal,” Camilla Gill, 55, from Winnsboro, South Carolina, said leaving a block party Steyer had thrown in her hometown. Gill said she didn’t know about Steyer, other than seeing his television ads — “every show on WISTV, WLTX, he has a commercial,” she said — and she had been wavering between Sen. Bernie Sanders (I-Vt.) and Elizabeth Warren (D-Mass.).

Steyer’s campaign closed down the town’s main street Sunday night, with games for the kids, hip performances and a free meal. One speech from Steyer and Gill was sold.

“I didn’t even know him … and I’m actually going to vote this week — I’m going to do the early vote because he can beat Donald Trump,” Gill said.

For the last week, Steyer has made headlines as the man who could make a dent in Biden’s support in South Carolina. He has a message of raising the minimum wage to $22 an hour, taxing the rich and talking about structural racism in America. His wife, Kat, has relocated to the state capital Columbia for the final three weeks of the campaign in the state.

Beating Biden would be a tall order in South Carolina, where the former vice president still leads the rest of the Democratic field by 12 percentage points. Biden skipped his own election night party in New Hampshire on Tuesday and flew to South Carolina instead.

“I hope you love me as much as I love you guys,” Biden told supporters at his party in Columbia that night.

Biden knows he can’t take their love for granted. With his disappointing fourth-place finish in Iowa and fifth-place showing in New Hampshire, many people who once believed Biden was the best candidate to take on President Donald Trump say they are now looking at other candidates.

The next two voting states ― Nevada and South Carolina ― are totally different than the first two. They’re bigger and significantly more diverse. South Carolina’s Democratic electorate historically has been around 60% nonwhite — and party watchers say it could approach 70% this year. Biden has consistently polled better with communities of color than many of his competitors, and it’s these voters he hopes will prove his doubters wrong.

But Steyer also sees an opening.

“Our internal data suggests that a Biden slide is particularly useful to us,” a Steyer aide told HuffPost.

‘He Has The Respect To Come To Chester’ 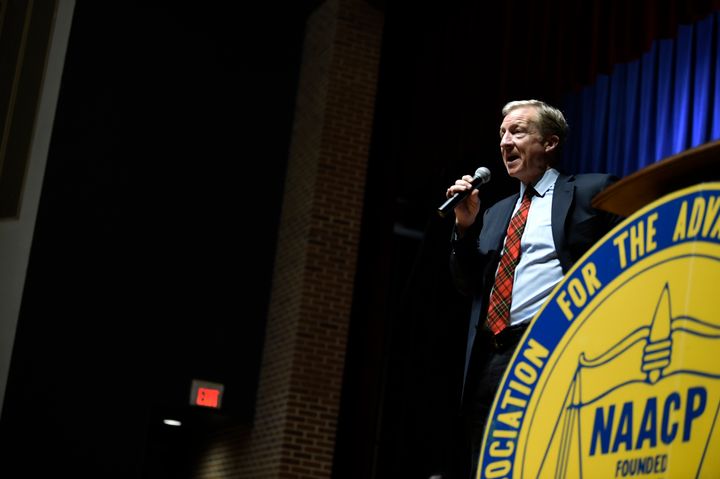 Steyer’s campaign has close to 100 staffers in the state, including alumni from the Obama and Clinton campaigns. He received press attention last week for paying one of his endorsers, the influential chair of the state’s Black Legislative Caucus, Rep. Jerry Govan (D), more than $40,000 to advise his campaign for four months of work.

But Steyer has already racked up some notable supporters in the state, including Edith Childs, the former South Carolina lawmaker that Barack Obama credited with his 2008 presidential campaign slogan “Fired Up. Ready To Go.” Biden has tried to co-opt the slogan; his campaign offices in the state have “Fired Up. Ready For Joe” posters up.

On Monday night, at a Steyer town hall in Rock Hill, Childs herself had a different chant to rev up Steyer’s supporters: “He’s fired up, and Trump has got to go.”

“He’s the only one that I did not have to educate or teach about the things that are happening in the African American community and communities of color and poor communities,” King said, explaining his endorsement. “He was already there.”

Voters at Steyer’s events are impressed for the same reason: He’s been coming to their small towns.

“He has the respect to come to Chester,” Millie McCullough, a 63-year-old resident of the city said. “Where are the other ones? Even with our own senators and representatives, when we know they’re here, they’re already gone.”

McCullough, who is Black, said she doesn’t feel the same attention from the other Democratic candidates.

“If you are in Iowa or New Hampshire, what’s there? I’m not trying to offend you, but we are not there,” she said.“They are not looking at us.”

This kind of face-to-face campaigning is crucial to winning elections in South Carolina, where trust and familiarity go a long way. At the block party in Winnsboro, Deborah Plair, 60-year-old who was volunteering for Steyer at the event, said the same.

“I listen to him talk on the TV on his commercials and he’s caring and wants to do something, and for him come to Winnsboro, a small town like this, that’s important,” Plair said.

Steyer is pouring millions into South Carolina to get in front of people’s faces with his message. And his ads are everywhere ― on TV, in newspapers, on the radio, on billboards and in mailers.

They also don’t have financial restrictions, because of Steyer’s personal wealth, whereas Biden’s campaign finances have been more volatile. Biden raised the biggest haul of his campaign so far in the last quarter of 2019 at $22.7 million, but still fell behind the biggest names in the field. His campaign went on the airwaves in South Carolina for the first time last week with plans to spend more in the coming weeks.

But Steyer argues his rise is more about message than money.

He likes to tell voters that he has a theory for how Democrats, namely Hillary Clinton, lost the 2016 election: They didn’t show up where they needed to.

“If you don’t show up you lose,” Steyer said in Winnsboro.

Not Just Another Rich Guy

Steyer prefaces almost everything he says in South Carolina, whether a stump speech or sitting across a resident at a diner, with “I’m from California.”

He’s clearly not from around here, and he’s willing to admit it, but he then tries to convince people that his message is for here. That he gets it.

There are some topics on which he doesn’t go into specifics unless he’s asked: He’s not for Medicare For All, and instead supports adding a public option to the Affordable Care Act. He doesn’t support making public universities tuition-free, but does for two-year colleges, nor does he want to cancel student debt.

But left on his own, Steyer ticks through a list. He wants to go further than all other Democrats on minimum wage: $22 an hour. He wants to talk about structural racism in every part of society: education — with a focus on historically Black colleges and universities — the environment and housing, even if it’s “awkward” coming from a white man.

“The way I’ve always done climate and the way that I will do climate — start with environmental justice, start with Black and brown communities where people can’t breathe without getting asthma,” he said at his town hall in Rock Hill. “And if you turn on the tap water and mix up some lemonade you get sick.”

This speech convinces those in the room.

“He wants to raise minimum wage, make everything even, not a race-type situation, he understands rural areas, he understands HBCUs, he started from the bottom up, he wasn’t born into money,” Gill said. “So he knows how working class America is.”

There isn’t much about Steyer’s upbringing that screams “working-class America.” His father was a big-name attorney and Steyer went to the prestigious Buckley School and Phillips Exeter Academy, then Yale, then Stanford. He worked at Goldman Sachs, in private equity, and eventually started an investment firm in San Francisco where he made billions.

And while Steyer acknowledges that people see him as very wealthy, his stump speech glosses over that wealth with a simple statement: “I started a business.”

That business was a billion-dollar hedge fund management company. And while Steyer’s name was probably unknown to most in the United States before his presidential run, he was a well known Democratic donor — and once even was floated as a possible Hillary Clinton administration Cabinet appointee.

Steyer often says that Democrats take Black voters for granted. While not explicitly saying it, Steyer especially wants to make it seem like Biden is taking them for granted. On the debate stage in New Hampshire last week, he called on Biden to disavow the support of state Sen. Dick Harpootlian — who is in hot water with the state’s Legislative Black Caucus for making comments about Govan advising Steyer.

Harpootlian also famously said in the 1980s: “I don’t want to buy the Black vote. I just want to rent it for a day” — a comment that remains among the most infamous political gaffes to come out of the state.

Biden refused to engage with Steyer, saying only he had talked to Harpootlian about the incident, and he had apologized. Days later in South Carolina, Steyer acted as if it hadn’t happened. Asked about Biden directly on Monday, he said he wouldn’t comment on his competitors.

Sitting at a corner booth at Gene’s Restaurant in Chester with town Mayor Angela Douglas on Monday morning, Steyer tried to order an English muffin. He gets offered buttered toast, before the two of them begin talking about a police-involved shooting that happened in town last November.