Thousands of dangerous felons would be released from prison and commit spectacular crimes if Congress passed the prison reform bill under consideration in 2018, Sen. Tom Cotton (R-Ark.) had warned.

“Someone’s going to get out,” Cotton told his Senate GOP colleagues during a closed-door meeting in November, according to Sen. Lindsey Graham (R-S.C.).

Worse, Cotton added: “We’re all going to lose our seats.”

Congress passed the First Step Act anyway, and President Donald Trump signed it into law last December. As a result, thousands of convicted felons have gained early release from federal prison. And yet there’s little evidence the measure harmed public safety. None of the law’s beneficiaries has committed a new crime, as far as anyone knows.

The First Step Act represents a modest but still remarkable shift away from the tough-on-crime politics that swelled the federal prison population starting in the 1980s. And the president has championed the law, inviting beneficiaries to the White House and bragging about it as an example of something he’s done for African Americans.

But Cotton’s refusal to go along with Trump shows that “law and order” rhetoric, with all its coded racial implications, will remain a part of American politics for the foreseeable future ― especially since Cotton seems to be biding his time to make his own White House run.

Provisions in the new law seek to make time in prison a tad less miserable, reduce recidivism, and make the criminal code a smidge less racist. The Bureau of Prisons has let out more than 3,000 prisoners ahead of schedule this year due to a change in how time credit for good behavior accrues. The bureau released another 1,600 prisoners thanks to a retroactive shortening of racially discriminatory sentences for crack cocaine. The law also reduced some minimum sentences.

To try to appease the tough-on-crime crowd, the bill’s bipartisan authors excluded many categories of violent offenders from its centerpiece provision, which awards additional time credit for participating in educational or work programs designed to reduce recidivism. Eligible offenders can win placement in prerelease custody, such as home confinement or a halfway house. (The risk and needs assessment system, as the provision is known, has not yet been fully implemented.)

But Cotton and some other Republicans insisted that the law did not exclude enough bad guys. They scoured the federal criminal code to come up with more categories of offender that had been omitted from the blacklist. Sen. Ben Sasse (R-Neb.), for instance, complained that the bill’s authors forgot to exclude people who’d committed assault within a maritime jurisdiction specifically.

Now, Cotton seems to be banking on the fact that someone who benefited from the new law will eventually commit a new crime.

The Ivy-educated combat veteran first-term senator and likely future presidential candidate told HuffPost shortly before the bill passed that “thousands of people will be released within weeks or months of a bill like this passing,” and that it would be “a danger to public safety.”

(Cotton’s presidential ambitions are an open secret; the Arkansas legislature changed state law in 2015 so he could someday run for president without risking his Senate seat.) 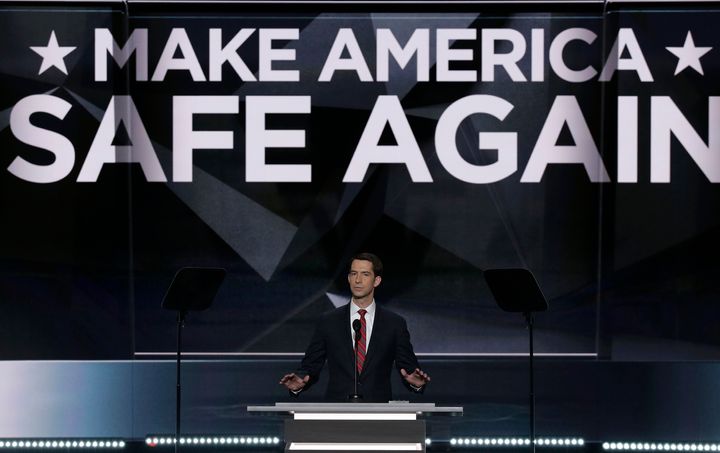 In April, after several hundred prisoners had been released and no notable crimes had been reported, Cotton said the law’s various provisions had not yet been implemented. He insisted he had not been proven wrong.

“I’ve never disputed that some people will be released from prison under the First Step Act and will lead productive lives,” Cotton said.

And yet he still insisted the crimes would come. “When the law is fully implemented, yes, I believe that people who are released early from prison will go on to commit crimes,” Cotton said. “It is almost a mathematical certainty.”

In July, the Justice Department announced a milestone in the law’s implementation: thousands of inmates had been released for good time and crack sentence reductions, and an initial version of the risk and needs assessment program was ready for review.

Cotton went on Fox News to declare he’d been proven right. Host Tucker Carlson said he’d obtained word from an administration official that one of the “dangerous people” who’d been freed was a man named O’Kene White, who had tied up young children during a robbery in New York in 2008.

“Tucker, I’m not surprised at all that almost 5,000 serious felons ― as you say, murderers, sex offenders, robbers, drug lords ― have been released early under this law,” Cotton said. “I predicted this would happen exactly as it has.”

A graphic indicated that the administration official said 59 of the released felons had committed homicide or aggravated assault, 106 had committed robbery, 239 committed sex offenses, and 296 had been found guilty of weapons charges ― 900 violent offenders altogether. But another 960 had committed apparently nonviolent drug offenses. (Almost half of federal inmates, who represent less than 10 percent of the overall U.S. prison population, are in on drug charges.)

The Carlson clip showed that Cotton will scream from the mountaintops about any development that he can use to burnish his brand. And that someone will make him aware of every development.

“There is no doubt in my mind that whenever somebody screws up, somebody in the Department of Justice is going to know about it and somebody’s going to tell Tom Cotton about it,” said Kevin Ring, president of Families Against Mandatory Minimums.

Ring is a former Republican congressional staffer who helped write mandatory minimum laws in the 1990s. A figure in the Jack Abramoff lobbying scandal, Ring said his thinking changed as his own prison sentence loomed. But even some mainstream Republicans who haven’t been to prison, such as FreedomWorks and the Koch brothers, think the system is horribly unfair and lobbied in favor of the First Step Act.

“It’s incredibly sad to watch a U.S. senator just chomping at the bit for someone to screw up so he can say, ‘I told you so,’” Ring said.

Aside from the fact that nobody who’s been released under the First Step Act is known to have committed any new crimes, Cotton’s claims that the First Step Act has already put violent former criminals back on the street is misleading, because it implies that the people who were released would not otherwise have been.

Of the nearly 5,000 who were granted earlier release dates, 3,000 were because of the good conduct provision. Those people only had their sentences shortened by a matter of weeks. The law merely clarified a previous good-conduct statute that lawmakers believed the Bureau of Prisons had been misinterpreting. The change meant that prisoners could get 54 days off their sentence per year rather than 47 ― an extra week.

Cotton successfully thwarted a similar prison reform effort in 2016, such as by arguing in a speech that the U.S. has “an under-incarceration problem” because many perpetrators of violent crime are never caught. (The U.S. incarcerates more of its citizens than any other country in the world.) In both 2016 and 2018, Senate Majority Leader Mitch McConnell (R-Ky.) said he didn’t want to divide his members. Cotton’s tactics couldn’t scare enough Republicans away from the First Step Act when Trump embraced it, however.

Just because Trump supported the First Step Act doesn’t mean he won’t continue to scaremonger about crime generally, especially when it presents an opportunity to rile up his supporters with racially loaded terms such as “inner city.” But the momentum right now may favor of those who want to continue reforming the criminal justice system.

Sen. Mike Lee (R-Utah), one of the bill’s top Republican proponents, said he’s optimistic that a strategy of bashing the First Step Act won’t be great politics. He said the law’s been a great success.

“This is helpful proof that you push this button, the whole world’s not going to blow up,” Lee said. “You can address this without the apocalyptic prophecies coming true.”