Political slogans are often derided — but if you want to be President of the United States, you’d better have a good one.

An effective slogan will sum up a candidate’s pitch to the country in a few words, and be powerful enough to cut through the endless onslaught of information in people’s lives.

They cast the candidate as someone who understands the country’s woes, and can guide America through them.

Here, Business Insider looks at the slogans of every winning campaign since World War II, and asks what makes them successful. 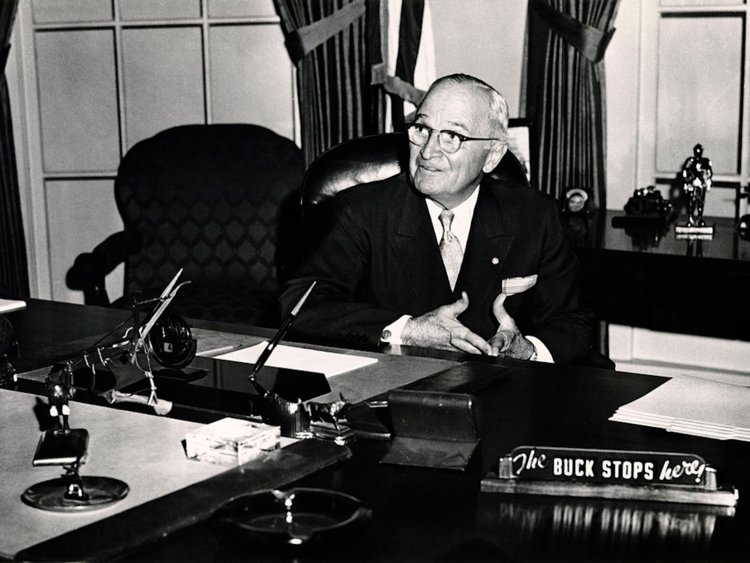 In the first presidential election since the end of World War II, incumbent Harry S. Truman, a Democrat, was widely expected to lose.

While campaigning on a whistle stop tour of the country, a supporter yelled “Give em’ hell, Harry!” At the candidate, and the phrase was adopted as the slogan of the plain-speaking former general’s supporters.

He went on to trounce Republican Thomas E. Dewey in the election.

While the campaign’s official slogan was “I’m Just Wild About Harry” — a reference to the lyrics of a popular 1921 song — another more famed slogan associated with the 33rd president is “The Buck Stops Here,” which Truman had written on a sign he kept on his desk. 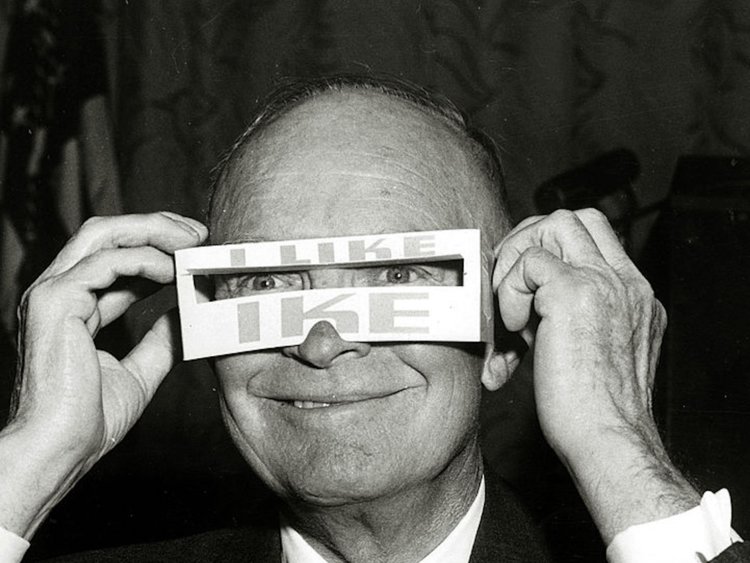 “I like Ike,” is one of the most celebrated political slogans in US history.

Eisenhower’s campaign was revolutionary, as it was the first to focus on pitching the candidate thorough TV ads. 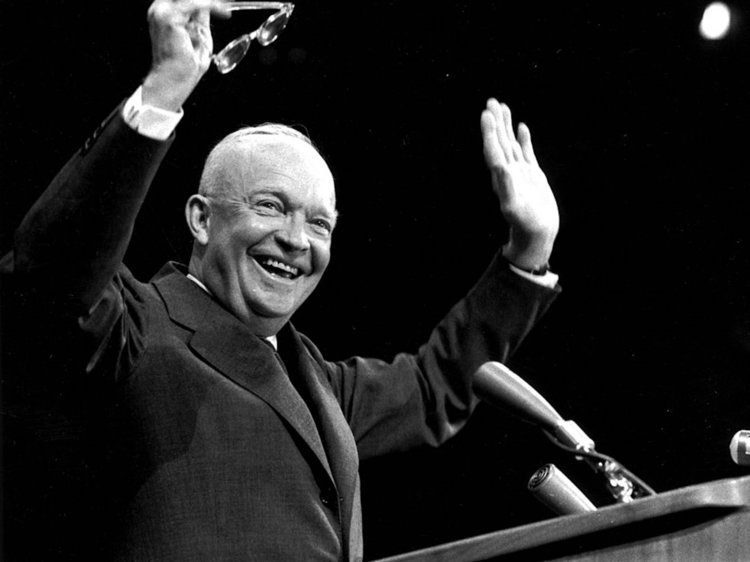 The tactic for choosing Eisenhower’s 1956 re-election campaign slogan was to stick with what works: “I still Like Ike.”

Americans did, re-electing him by a landslide as America enjoyed a post-war economic boom, despite growing Cold War tensions. 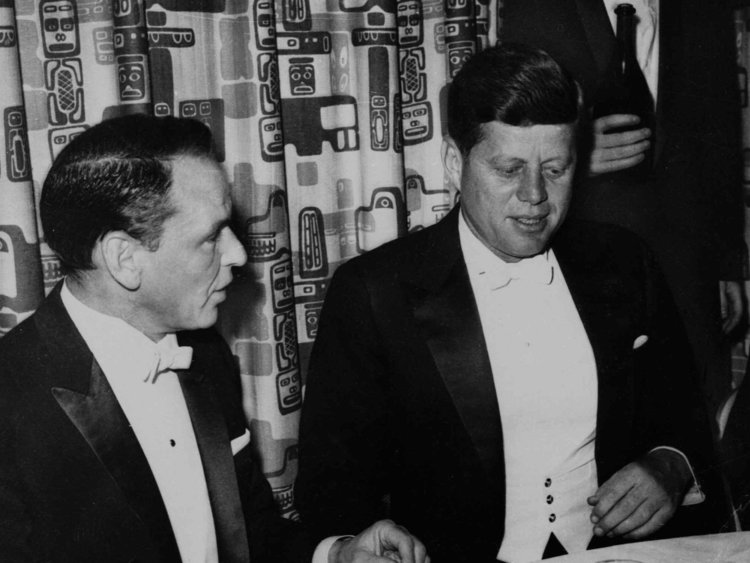 Democrat John F. Kennedy is 1960 opted for the aspirational “A Time for Greatness” slogan in his winning 1960 bid for the presidency.

However perhaps more famous isFrank Sinatra’s special version of his song “High Hopes”, which he recorded for the candidate with the new lyrics.

“Everyone is voting for Jack /’Cause he’s got what all the rest lack/Everyone wants to back Jack,” crooned Sinatra, a friend of the president and member of his glamorous “Camelot” inner circle.

1964: Lyndon Baines Johnson — All The Way With LBJ 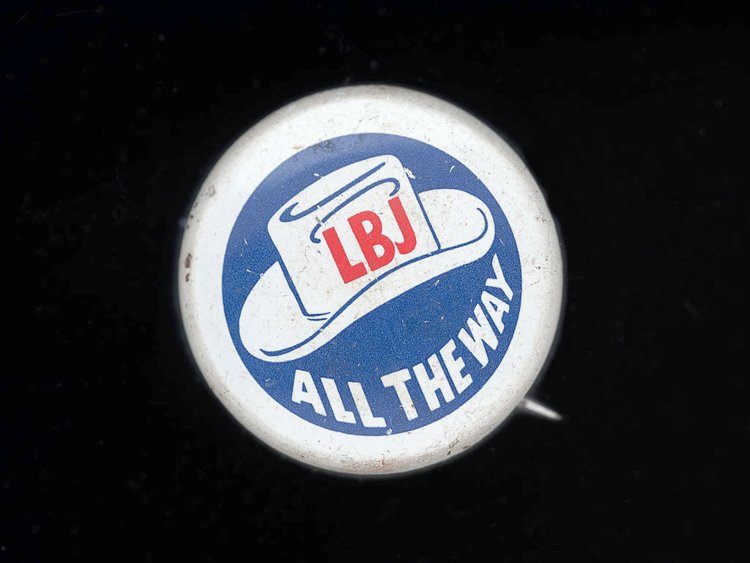 He then won a sweeping victory of his own in the 1964 presidential election with the slogan “All the Way With LBJ,” pledging to continue Kennedy’s legacy.

However LBJ’s popularity collapsed as America became further mired in the Vietnam War, and the slogan was turned against him.

When in 1966 Australian premier Harold Holt declared that Australia would be “all the way with LBJ” in Vietnam, he was derided as an an American lackey.

1968: Richard Nixon — This Time, Vote Like Your Whole World Depended on It 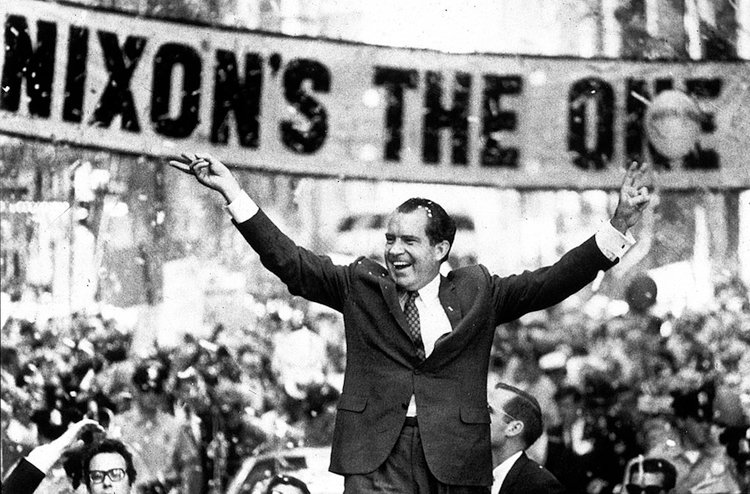 Amid the Vietnam War, riots on the streets, and the counterculture, Richard Nixon appealed to the fears of what he termed the “Silent Majority,” disturbed by the changes sweeping America.

His 1968 campaign slogan was “This Time, Vote Like Your Whole World Depended On It” 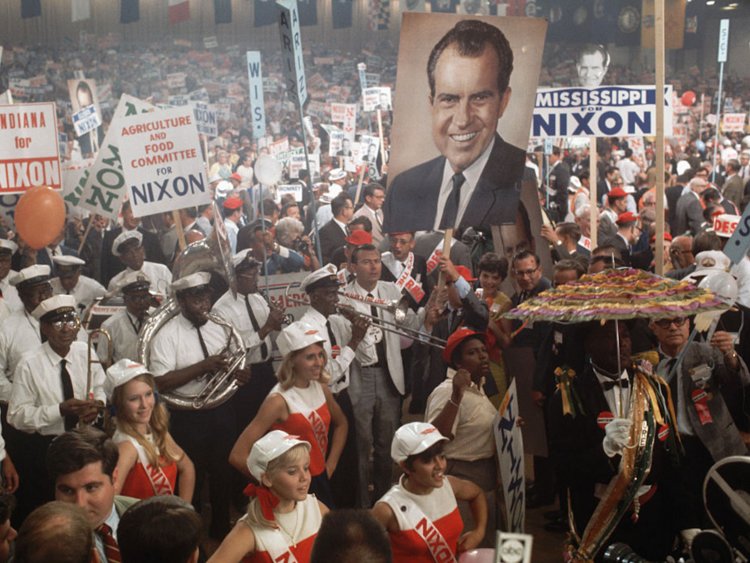 But in 1972 he won a landslide re-election with the slogan “Now, More Than Ever.”

He painted his opponent, Democrat George McGovern, as a threat to American values. 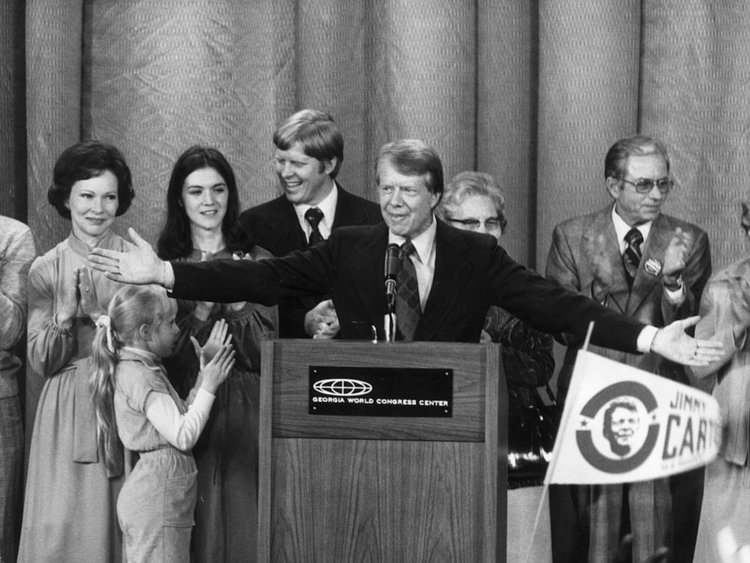 Change was again the theme for the 1976 election, when Democrat Jimmy Carter took on Gerald Ford, who became president after the Watergate scandal forced Nixon’s resignation.

“A Leader, for a Change,” promised Carter, pitching himself as a reformer, untainted by scandal. 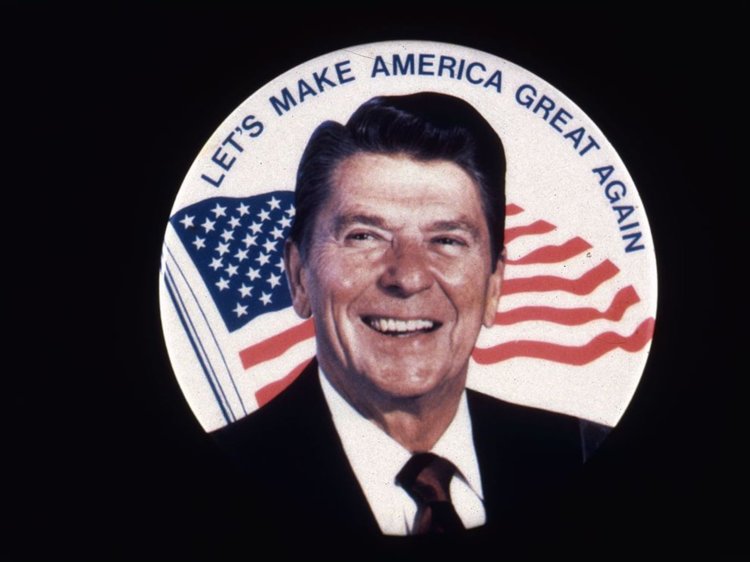 Donald Trump — then a brash Manhattan businessman at the start of his career — would 36 years later knock one word off the slogan to arrive at 2016’s “Make America Great Again.” 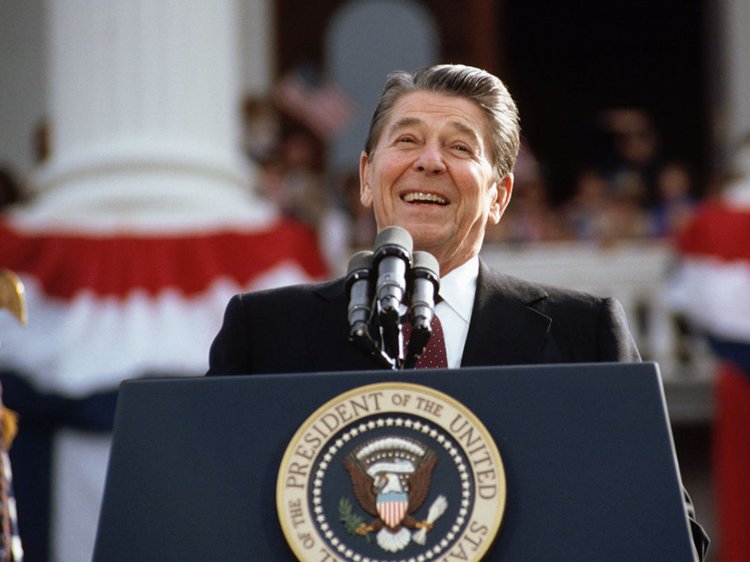 Reagan pitched himself as the candidate to drag America out of its economic malaise under Carter.

Riding high on an America’s economic boom during his first four years in the White House, Reagan won a second term in 1984 underthe slogan “It’s Morning Again in America” — broadcast into American households in an iconic campaign ad. 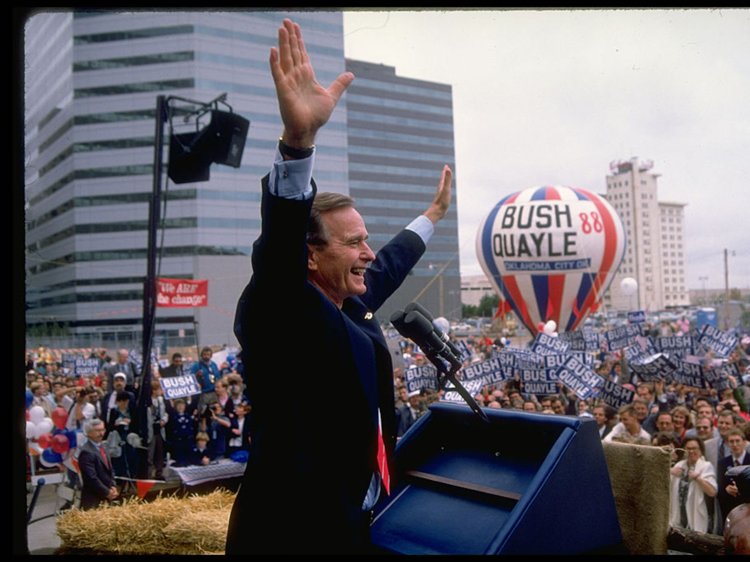 George HW Bush successfully campaigned to keep the Republicans in the White House in 1988, with the slogan of a “Kinder, Gentler Nation,” promising to soften the hard edges of Reagan’s conservatism.

However his pledge at the 1988 Republican convention —”Read my lips, no new taxes,” — came back to haunt him, with Democrat Bill Clinton hammering him about the broken pledge during the 1992 election. 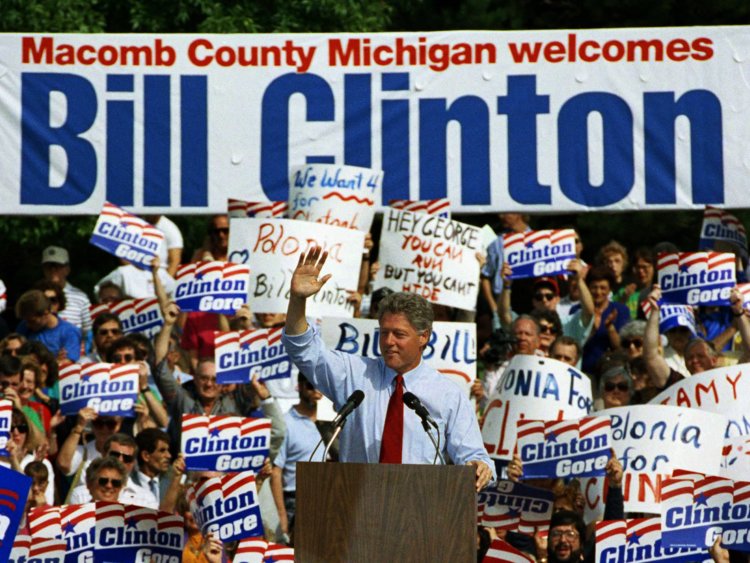 The Democrat resurgence under Clinton was proclaimed under the slogan “For People, For a Change.”

But it was the unofficial slogan, initially first used by Clinton’s advisers, that caught the imagination: “It’s the economy, stupid.”

Clinton’s campaign chief James Carville coined the phrase as a reminder for campaign staff to focus on selling Clinton as the candidate to haul America out of its early ’90s recession.

1996: Bill Clinton again — Building a Bridge to the 21st Century 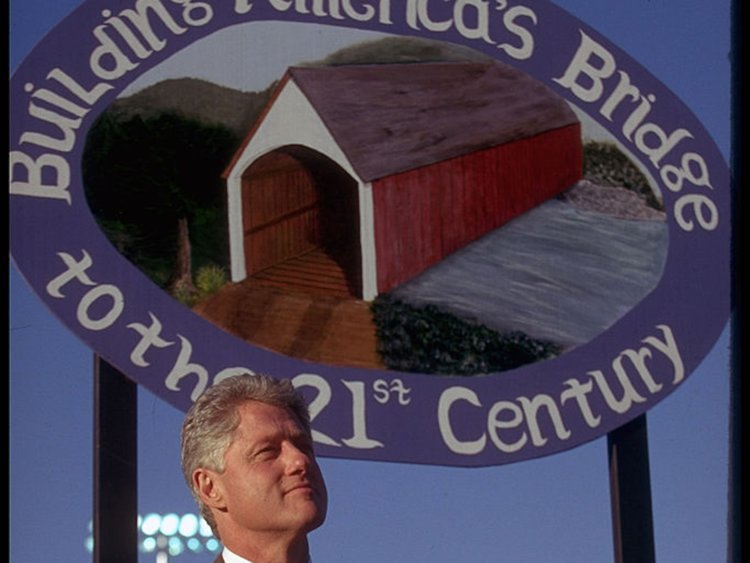 Clinton offered vague promises during his 1996 campaign for re-election as the millennium approached, pledging to start “Building a Bridge to the 21st Century.”

But it was enough to earn him a second term in a landslide victory, as America stood as the world’s only superpower at the end of the 20th century. 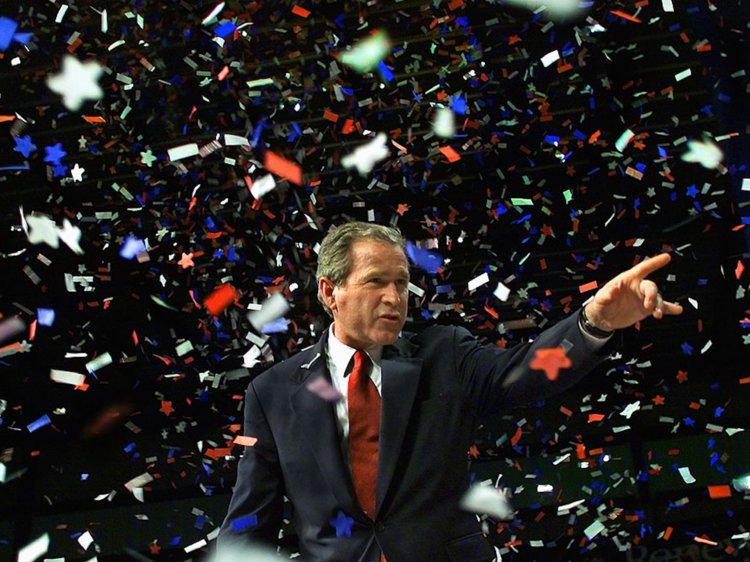 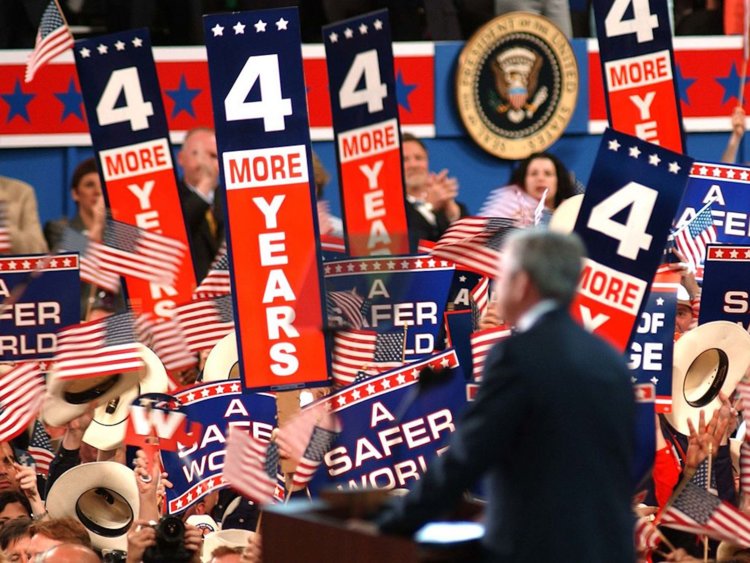 In an America shaken by the 9/11 attacks he struck a more somber tone and pledged to build “A Safer World and a More Hopeful America.” 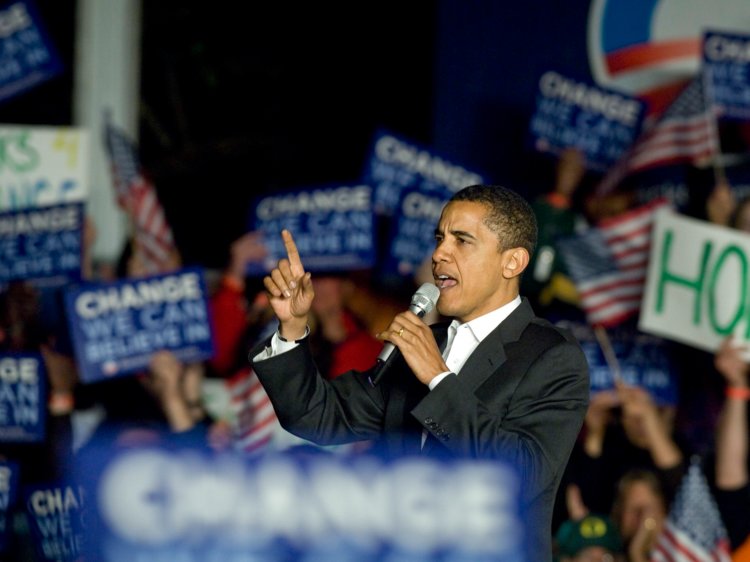 “Change We Can Believe In,” was Barack Obama’s slogan when he successfully campaigned to become America’s first black president in 2008.

“Yes we can!” his supporters chanted as he swept to victory in a movement built on a message of youth, inclusion and optimism.

His campaign generated slogans for supporters to turn into shareable content, which was eventually boiled down to a one-word message: “Change.” 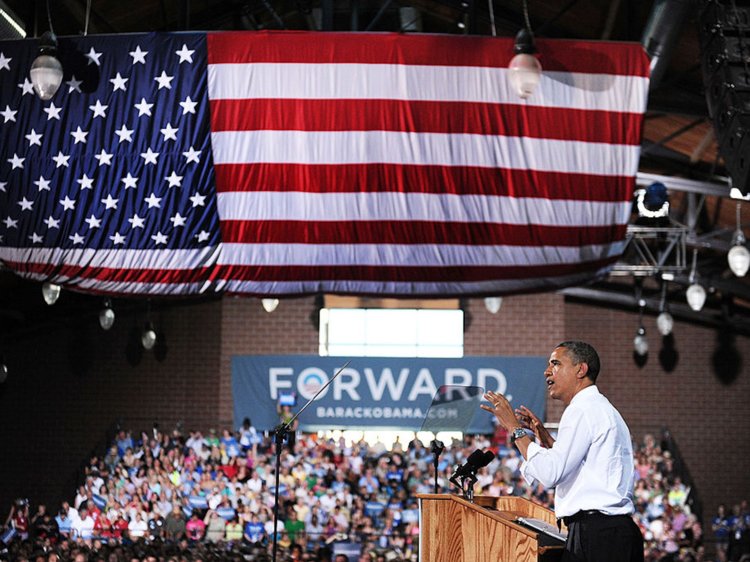 Four years later Obama pledged to build on the progress of his first term under another one-word slogan: “Forward.” 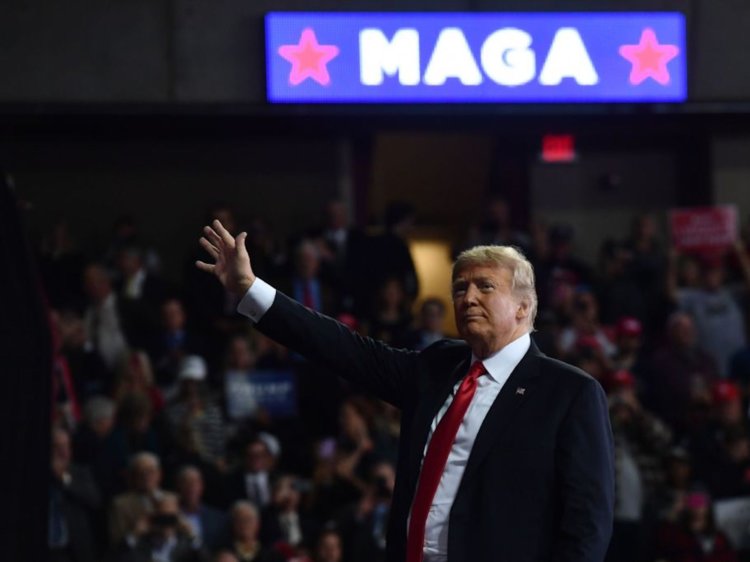 It was back to the future for Donald Trump when he dusted off a slogan used not just by Reagan, but also by the anti-immigration Populist Warren G Harding in 1920: “Make America Great Again.”

And, learning from the social media savvy of Obama’s campaign, the slogan is reduced to “MAGA,” for use as a social media hashtag by the president and his supporters.

The slogan has become a flashpoint in an America divided by Trump’s policies, with some supporters sporting clothing emblazoned with MAGA slogans confronted in public by opponents of Trump.