The apparent sinking of an Indonesian naval submarine and loss of dozens of lives this week puts the incident among some of the worst submarine catastrophes.

Indonesia’s diesel-powered submarine KRI Nanggala-402 disappeared during a training exercise Wednesday with 53 people on board. Indonesian and international search-and-rescue assets have been desperately looking for the submarine for days in hopes of finding it and saving the crew. 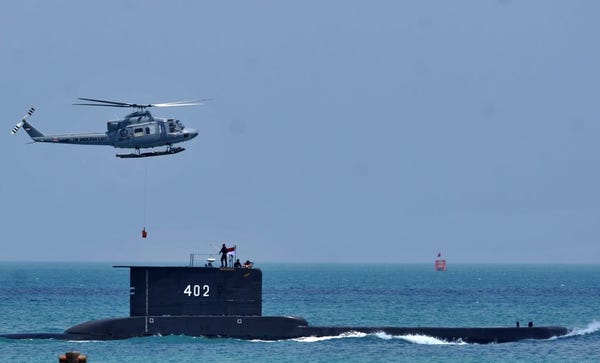 What they found instead appears to be evidence of a worst-case scenario. Search-and-rescue teams found items, such as prayer rugs, a grease bottle, part of a coolant pipe, and a torpedo component believed to be from the submarine. These items would only be in the water if the sub had broken apart.

Together with the oil slick, a possible sign of a fuel tank rupture which was found early in the search near the point of the submarine’s final dive, the debris is evidence the submarine has sunk, the Indonesian navy said.

“With the authentic evidence we found believed to be from the submarine, we have now moved from the ‘sub miss’ phase to ‘sub sunk,'” Indonesian Navy Chief Yudo Margono said at a press conference Saturday. All passengers are presumed dead, the AP reported.

At this point, the submarine has likely run out of oxygen, as it was only equipped with about 72 hours of air, according to the Indonesian military.

The Indonesian navy has said it believes that the submarine, a 1,400-ton vessel made by Germany in the late 1970s and refitted in 2012, may have sunk to a depth of 2,000 feet, putting the vessel likely well past the point where the hull could withstand the crushing pressure of the water around it.

Bryan Clark, a former US Navy submarine officer and current defense expert at the Hudson Institute, told Insider “if a small diesel submarine like this Indonesian one goes down in 2000 feet of water, it is unlikely to survive.”

As KRI Nanggala 402 has not yet been found, it is still not clear what exactly happened to the submarine, but if the vessel has indeed sunk with all 53 passengers, it would put this terrible tragedy among some of the worst submarine disasters. 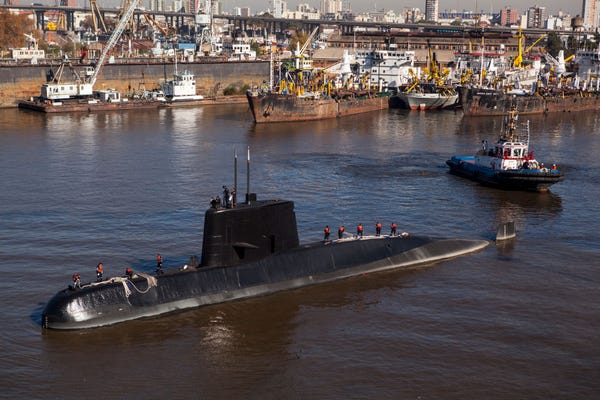 On November 15, 2017, the Argentine Navy diesel-electric submarine ARA San Juan disappeared while on patrol with 44 crew members on board. The navy later determined that an anomalous noise detected shortly after the submarine’s last transmission was “consistent with an explosion.”

The submarine was eventually found a year later at a depth of 3,000 feet in the South Atlantic.

In 2003, a Chinese diesel-electric submarine with hull number 361 suffered a serious mechanical malfunction during a training exercise that led to the deaths of 70 sailors. The crew is said to have suffocated, though details are limited. 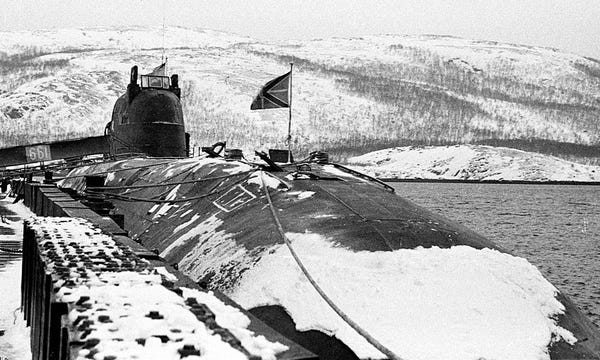 On August 12, 2000, the Russian nuclear-powered submarine K-141 Kursk vanished in the Barents Sea. Russian authorities later determined the vessel sank after a torpedo on board unexpectedly exploded. The first blast then triggered the explosion of several other warheads.

The Russian naval vessel went down with 118 sailors on board. Although twenty-three Russian sailors are believed to have survived the initial catastrophe, the Russian navy was not able to rescue them in time. 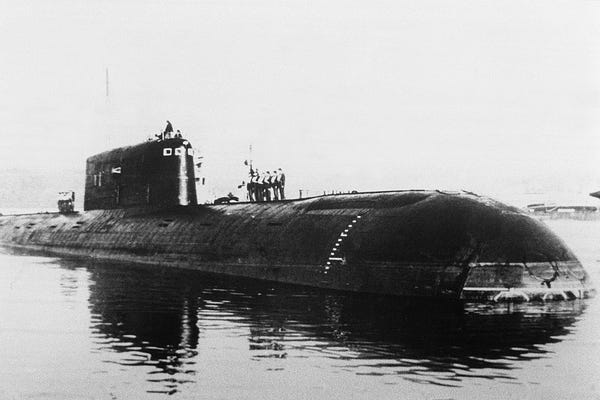 On April 7, 1989, the Soviet nuclear-powered attack submarine K-278 Komsomolets sank in the Norwegian Sea after a devastating fire broke out.

Forty-two of the submarine’s 69 crew members died in this accident. Some perished aboard the ship. Others that made it out died of exposure to the frigid waters before they could be rescued.

On April 8, 1970, a fire crippled the Soviet nuclear-powered submarine K-8, forcing the crew of 52 sailors to abandon the vessel. When a rescue ship arrived on scene, the crew returned to the submarine, but while the ship was under tow in the Bay of Biscay, it sank in rough seas with all hands lost. 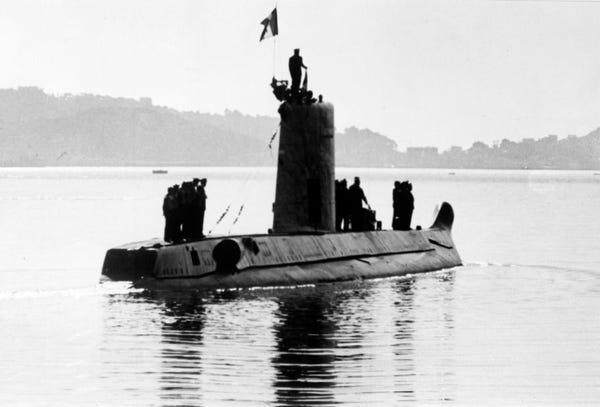 On March 4, 1970, the French diesel-electric submarine was lost in the Mediterranean while diving off Cape Camarot. The French defense ministry assessed that the vessel sank along with its entire crew of 57 sailors after receiving reports of an explosion. Fuel and other debris were found floating on the surface. 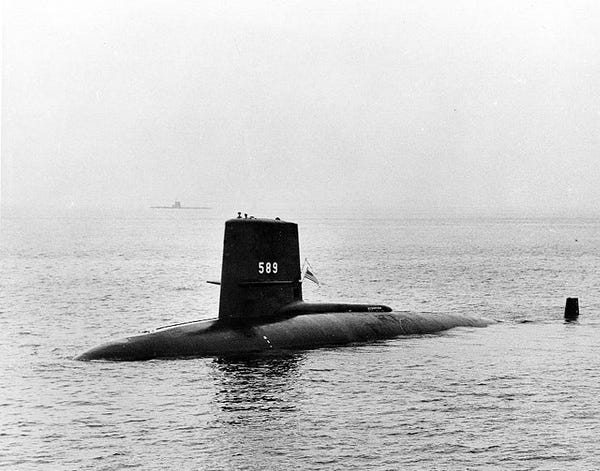 The American nuclear-powered submarine USS Scorpion mysteriously vanished in the Atlantic Ocean with 99 sailors on May 22, 1968. No one knows exactly what happened to the Scorpion. It was found five months later 400 miles southwest of the Azores at a depth of 10,000 feet.

The Scorpion was one of four submarines that were weirdly lost in 1968.

On March 8, 1968, the Soviet diesel-electric ballistic missile submarine sank in the Pacific Ocean with 98 sailors on board. The US found the submarine six years later at 16,000 feet and covertly recovered part of the vessel. 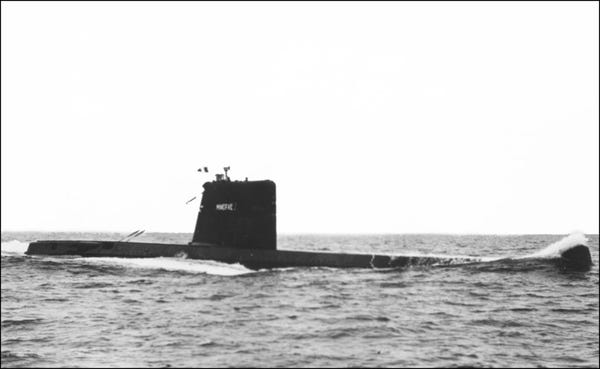 On January 27, 1968, the French diesel-electric submarine Minerve and its crew of 52 sailors disappeared in bad weather while returning to port.

Just a few days prior to the sinking of the Minerve, the Israeli diesel-electric submarine INS Dakar inexplicably sank in the Mediterranean, resulting in the death of 69 sailors. The Israeli submarine was found in 1999 at 9,500 feet, but the exact cause of the disaster remains unknown. 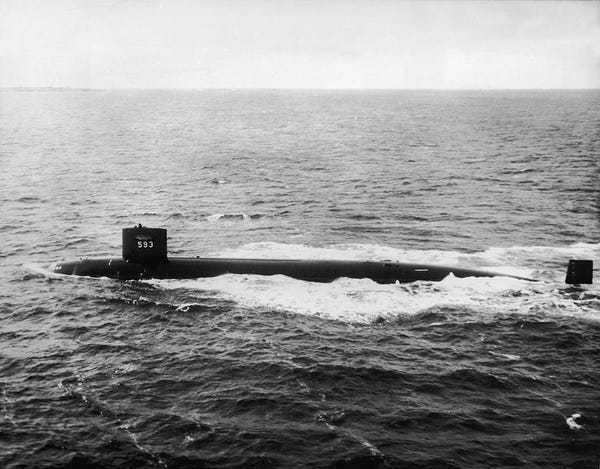 On April 10, 1963, the US Navy experienced its most devastating submarine disaster when the nuclear-powered submarine USS Thresher sank in the Atlantic Ocean and imploded. All 129 American personnel on board were killed in the deadly accident.