Dozens of Texas Democrats gathered Tuesday on Capitol Hill to urge Congress to pass voting rights protections a day after the caucus left its home state in a dramatic move to block Republican-led efforts that would make it harder for Texans to vote.

On Monday, more than 50 Texas lawmakers boarded two charter planes bound for Dulles International Airport just outside Washington, where they landed in the evening. Their absence effectively paralyzes the Texas state House of Representatives, which requires a majority of its members to be present in order to move legislation forward.

U.S. Senate Majority Leader Chuck Schumer (D-N.Y.) is expected to meet with the group on Tuesday. President Joe Biden is also expected to address the issue of voting rights in a speech from Philadelphia in the afternoon.

While the U.S. House has passed the For the People Act and the John Lewis Voting Rights Act ― measures that would shore up voter protections amid former President Donald Trump and the GOP’s continued assault on the electoral system ― the bills remain stalled in the Senate, sparking intense debate over the chamber’s filibuster rule. The Texas Democrats view the federal legislation as a way to prevent Republicans from pushing voter restrictions through at the state level; 2021 is on pace to be the worst year for voter suppression laws in a decade.

This week’s dramatic escalation in Texas politics marks the second time this year that Democrats have left the state House in order to halt new Republican voting proposals. In late May, hours before a midnight deadline to pass the bill along to Texas Gov. Greg Abbott (R), a large group of Democrats walked out of the state House en masse.

At the time, they secured a short-term victory against legislation that would place new restrictions on absentee voting, empower partisan poll watchers, ban 24-hour polling sites and make it easier to overturn the results of an election. 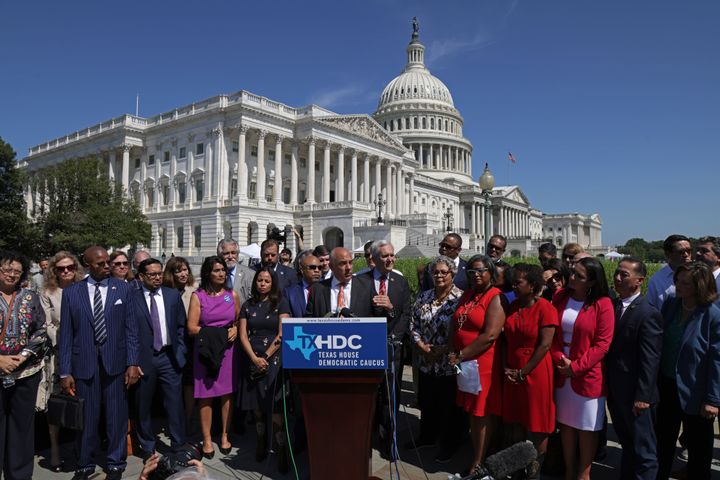 In response, however, Abbott called for a special legislative session, which convened late last week. He also vetoed a section of the state budget that funds the Texas Legislature and its staffers ― a decision currently being challenged in court.

This week, Abbott has threatened the Democratic lawmakers with arrest for their actions.

“As soon as they come back in the state of Texas, they will be arrested, they will be cabined inside the Texas Capitol until they get their job done,” the governor told Austin news station KVUE-TV.

The Democratic lawmakers are planning to remain out of Texas through the end of the current special legislative session, which ends Aug. 7. Yet Abbott vowed not to let the matter drop.

The new voting bills, House Bill 3 and Senate Bill 1, that were filed during the special session do not include all of the controversial measures from the bills introduced earlier in the year. But they still include new identification requirements, ban drive-through and 24-hour voting, empower poll watchers and prevent local election officials from sending vote-by-mail applications to anyone who has not specifically requested one.

Civil rights advocates say that the measures disproportionately target voters of color, who may have less time or opportunity to exercise their civic rights.

“They wouldn’t be doing this if they didn’t think it would have a negative outcome on particularly brown and Black voters in the state of Texas,” U.S. Rep. Marc Veasey (D-Texas) said at Tuesday’s press conference.

Texas state Rep. Rafael Anchía, who chairs the Mexican-American Legislative Caucus, said Tuesday that he was committed to killing “any undemocratic efforts in the state legislature,” even if that meant leaving.

He added: “We are not here smiling. We are not spiking the ball.”

Turner explained that the Texas state House consists of 150 members and requires two-thirds of them to be present to constitute a quorum ― meaning that no more than 50 can be absent at once.

“We vote in Texas, and we register our attendance by the use of voting machines on our desks, and minutes ago at least 57 letters were delivered to the House journal clerk directing the House to lock our voting machines and not unlock them before we express permission to do so upon our return,” Turner said.

From the steps of the U.S. Capitol, Texas state Rep. Senfronia Thompson led the caucus through a chorus of “We Shall Overcome.”