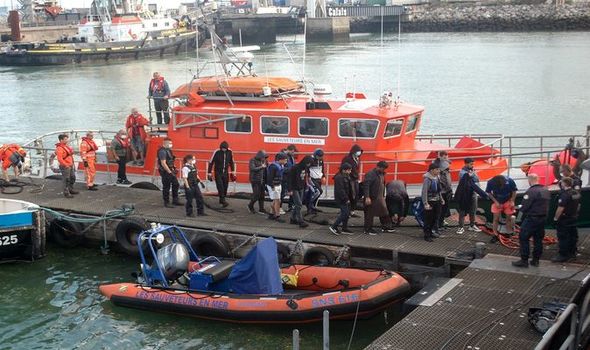 China and Turkey have been identified as key suppliers of the boats and the Home Office and intelligence experts are at the heart of efforts to disrupt the supply chains. Tactics include buying up stock to force up prices and there is a new focus on seizing boats that get into the “wrong hands” before they can be used for people smuggling.

Denying gangs access to boats is the latest tactic in efforts to crack down on illegal crossings. It comes as new waves of migrants are expected following the Taliban takeover of Afghanistan.

The Government is under intense pressure from backbench Conservative MPs to stop migrants and refugees illegally entering the UK via the Channel.

Momentum is building in support of major reform or even repeal of the Human Rights Act.

More than 25,000 people have put their lives in danger by crossing aboard dinghies and kayaks and other small boats since the start of last year, according to an analysis by the Press Association.

A Tory MP who won a “red wall” seat from Labour in 2019 warned that the voters were so angered by the small boats landing they could let Sir Keir Starmer’s party in by voting for parties such as Richard Tice’s Reform and Laurence Fox’s Reclaim to punish the Conservatives for failing to take control of the issue.

Reform plans to field around over 600 candidates at the next election and has had more than 300 applications from people wanting to stand as candidates.

A top-level Home Office source played down the level of anger in the country, saying it was not reflected in correspondence.

They also argued that small boats crossings attract attention because it is such a visible form of entering the country – but in pre-pandemic times many people would have arrived in the country by plane or by other methods.

Dudley North Conservative MP Marco Longhi warned against playing down the level of anger about illegal entry to the UK.

He said: “I think Priti Patel is very clear that there is an issue and she is taking action on it… Let me be clear, a significant number of seats were won on the basis of people voting for Brexit because of the commitment this party made [about] taking back controls of our borders and our laws and the arrival of dinghies in Dover is the most visible expression of us not yet having achieved that…

“I completely support Priti Patel with what she is doing and I also understand that she is fighting the system [in] getting things done.”

The Government’s Nationality and Borders Bill is intended to help crack down on Channel crossings and overhaul the asylum process.

Ms Patel last week used her conference speech to say there is “no reason why any asylum seeker should come to the United Kingdom directly from France,” which she described as a “safe country”.