Leading Democratic Senate candidates in three key races where their party aims to flip a red seat blue in the 2022 midterm elections are hauling in campaign cash as they spotlight their opposition to the legislative filibuster, which many in their party are hoping to scrap to advance key policy initiatives.

Rep. Val Demings of Florida, who’s challenging Republican Sen. Marco Rubio in next year’s election, hauled in $4.6 million during the April-June second quarter of fundraising, topping the GOP incumbent by roughly $600,000 the past three months.

Some of the campaign cash Demings brought in came from her late-June spotlight of her opposition to the filibuster, which the GOP is using to stymie President Biden and congressional Democrats from passing much of their agenda.

A month ago the Republicans – using the filibuster – successfully downed the congressional Democrats’ sweeping election and campaign finance reform bill, which was a top item on their agenda.

Demings wrote an opinion piece in USA Today and went up with scores of Facebook ads advocating for the elimination of the filibuster. 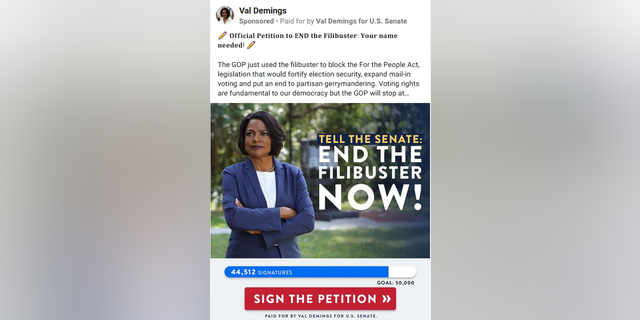 The filibuster, a longstanding Senate tradition requiring 60 votes in the 100-member chamber to advance a bill, effectively allows the minority party to block certain legislation. The Senate is currently evenly split 50/50 between the two parties, with the Democrats holding a razor-thin majority due to the tiebreaking vote of Vice President Kamala Harris through her constitutional role as president of the Senate.

But the Democrats are nowhere close to obtaining the 60 votes needed to quash a filibuster. They don’t even have the simple majority needed to eliminate the legislative filibuster rule. Two moderate Democrats – Sen. Kyrsten Sinema of Arizona and Sen. Joe Manchin of West Virginia – are opposed to the push by lawmakers from the left of their party to scrap the filibuster.

Longtime Rep. Tim Ryan of Ohio, the leading contender for the Democratic nomination in 2022 in the race to succeed retiring GOP Sen. Rob Portman, was opposed to eliminating the filibuster when the Democrats were in the chamber’s minority.

But late last month he also went up with Facebook ads, saying he was “PISSED” and that “We Must Get Rid Of The Senate Filibuster.”

Ryan raised roughly $2.3 million the past three months, nearly doubling his fundraising haul from the first quarter of 2021. 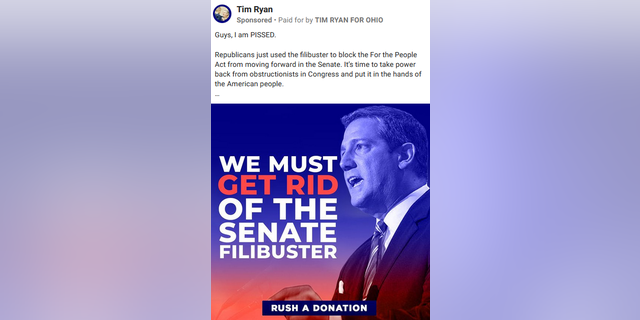 To Ohio’s east, in Pennsylvania, Lt. Gov. John Fetterman has also been highlighting his push to scrap the filibuster.

Fetterman, the most well-known of the Democrats running in the race to succeed retiring Republican Sen. Pat Toomey, went up with Facebook ads last month spotlighting Manchin’s opposition to ending the filibuster. The candidate’s raised roughly $6.5 million so far this year as he campaigns for the Senate.

Fundraising off the push to eliminate the filibuster seems like a no-brainer for some Democratic Senate candidates, especially in blue and purple states, as it rallies the base and helps bring in campaign cash.

But Republicans say there could be a downside come next year’s general elections.

“Scrapping the filibuster is a great issue to rally their liberal base in a primary and raise money. But it becomes a liability in a general election,” veteran Republican strategist Ryan Williams told Fox News.

“They’ve painted themselves into a partisan corner. These Democrats are competing for seats that are currently held by Republicans, and in order to win support they’re going to have to look like bipartisan consensus builders,” Ryan argued. “By campaigning against the filibuster, they’re dropping any pretense of bipartisanship and looking like rigid partisans who will have difficulty attracting the independent votes they need to win.”

August 4 was the busiest day for IPOs since 2007

Market experts say buoyed by returns from recent IPOs, retail investors are now subscribing to all offers being launched. The last four firms to list...

Amid brightening conditions in some markets, Adidas said 2021 revenues should advance as much as 20 percent on the back of key product releases, including...

August 4 was the busiest day for IPOs since 2007