Infrastructure bill is ‘strong’, ‘might vote’ for it: Rep. Van Drew

The Senate on Tuesday passed a major $1 trillion infrastructure spending bill in a significant show of bipartisan force that marked a big step forward for President Biden's domestic agenda.

The vote was 69-30, with 19 Republicans – including Senate Minority Leader Mitch McConnell – joining all Democrats to approve major investments to the nation's roads, bridges, railways and more. To mark the achievement, Vice President Kamala Harris came to the Capitol to preside over the Senate and announced the successful vote.

"Big news, folks," Biden tweeted immediately after the vote. "The Bipartisan Infrastructure Deal has officially passed the Senate. I hope Congress will send it to my desk as soon as possible so we can continue our work of building back better."

The final passage vote was a culmination of a months-long rocky effort between a group of bipartisan senators and the White House intent on showing the country that Republicans and Democrats can still work together to fix the nation's crumbling infrastructure.

Ohio Republican Sen. Rob Portman, one of the lead negotiators, celebrated the vote as a historic investment in infrastructure that will serve the American people for decades to come.

But the rare showing of bipartisanship was short-lived Tuesday, as Senate Majority Leader Chuck Schumer, D-N.Y., quickly pivoted to advancing a massive $3.5 trillion budget bill. Minutes after the infrastructure bill success, Schumer immediately called a procedural vote to begin debate on the Democrats' budget plan, which passed along party lines: 50-49.

This second spending plan is spearheaded by Sen. Bernie Sanders, I-Vt., the chairman of the budget committee. Republicans made clear Tuesday they'll make it politically painful for Democrats to pass this second bill, which will not require any GOP support under a process called budget reconciliation. 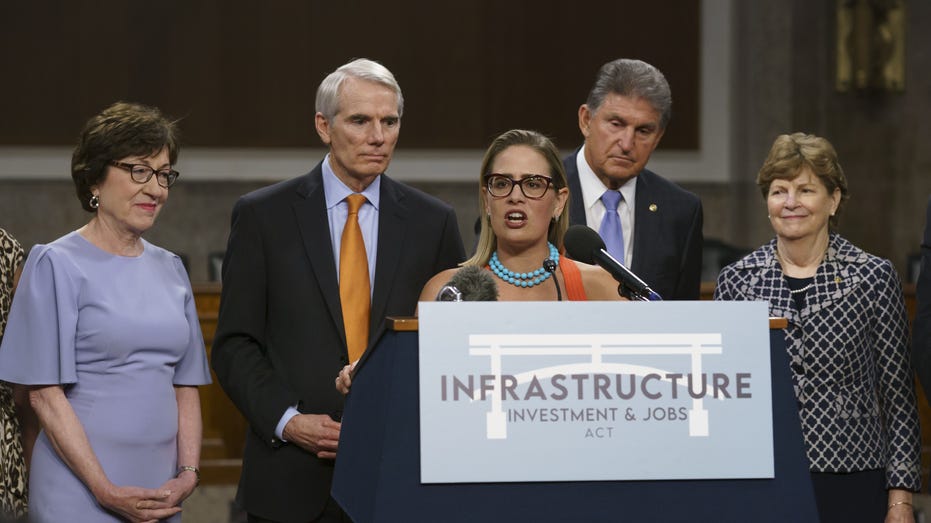 "[Democrats] want to begin pushing through a reckless taxing and spending spree that was authored by our self-described socialist colleague Chairman Sanders," McConnell, R-Ky., said Tuesday. He said Republicans are going to force tough votes on a series of politically charged amendments.

"We're going to argue it out right here on the floor at some length," McConnell said. "Every single senator will be going on record over and over and over."

The final passage of the second $3.5 trillion budget blueprint in the Senate in the coming days is critical because House Speaker Nancy Pelosi, D-Calif., said she won't allow a standalone vote on the narrower $1 trillion bipartisan infrastructure deal unless it's paired with the bigger package that liberals have demanded.

Pelosi has the slimmest of majorities in the House, with 220 Democrats to 212 Republicans and three vacancies.

A group of moderate Democrats has urged Pelosi to hold a vote on the $1 trillion infrastructure bill while raising alarms about the size of the $3.5 trillion bill that they say could fuel inflation. Meanwhile, progressives, led by the so-called Squad, have dismissed the bipartisan plan and insisted their votes are contingent on the passage of the $3.5 trillion package, which would be funded through new tax hikes on the wealthy and corporations.

The Congressional Budget Office (CBO) determined the legislation wouldn't be fully paid for – as authors had originally said – and instead would add $256 billion to the deficit over the next 10 years.

The House is currently in summer recess but is expected to take up infrastructure after members return to Washington in September. 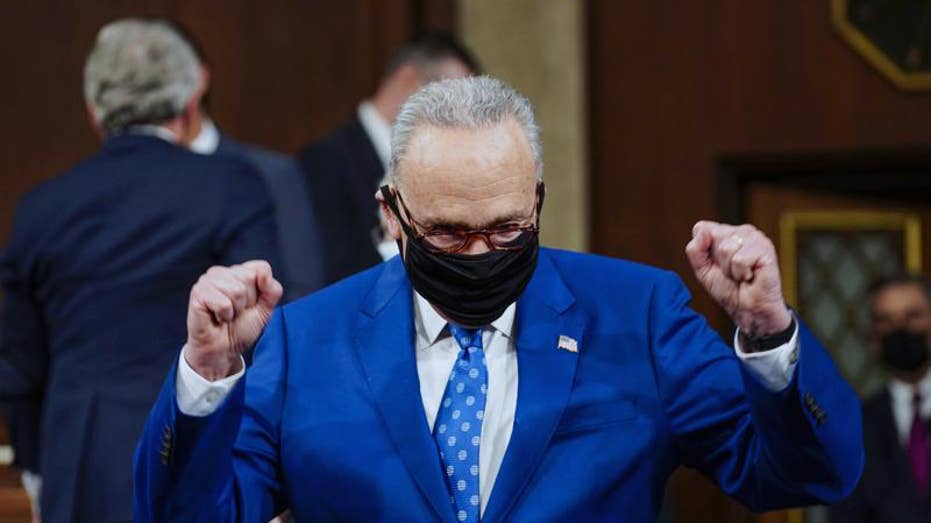 Senate Majority Leader Chuck Schumer of N.Y., arrives to the chamber ahead of President Joe Biden speaking to a joint session of Congress, Wednesday, April 28, 2021, in the House Chamber at the U.S. Capitol in Washington. (Melina Mara/The Washington

While the road ahead may be bumpy in the House, lawmakers in the Senate had reason to celebrate after many long nights and weekends at work and plenty of setbacks along the way.

Schumer congratulated the bipartisan persistence of the senators and Biden and he touted the legislation as the "most robust injection of funds into infrastructure in decades."

"Despite this long road we have taken, we have finally reached the finish line," Schumer said.