History has been made as Boris Johnson answered Prime Minister’s Questions virtually from Downing Street, unable to be physically present in parliament for what was meant to be his big government reset week.

Just four days into self-isolation due to coming into close contact with a Tory MP who caught coronavirus, he appeared in front of a branded silver screen from the office in his flat above Number 10.

The space is only accessed by Mr Johnson and able to be used because the building is a “working house”, his spokesman said afterwards. Addressing the chamber of socially-distanced MPs, Mr Johnson put a spin on the usual reply rattled off at every PMQs in response to the first question asking the prime minister to list their engagements that day.

But usual business quickly got under way, with Labour leader Sir Keir Starmer appearing in-person at the despatch box to direct pointed attacks at the screen on the wall opposite – above Jacob Rees-Mogg’s head.

Twice he challenged Mr Johnson for reportedly branding devolution in Scotland a “disaster” – something Downing Street has not denied. 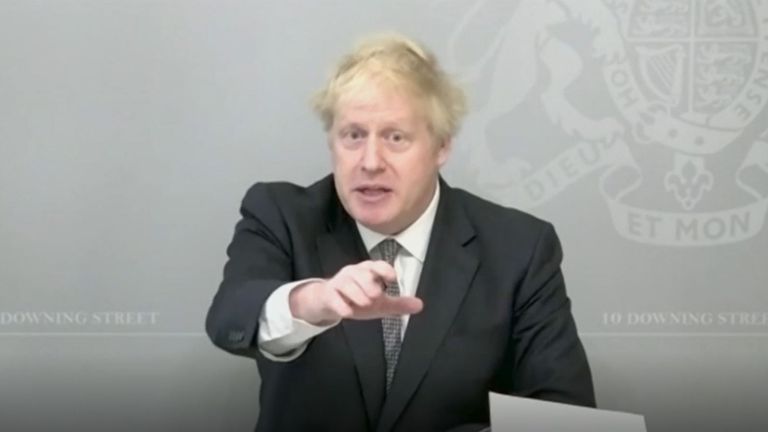 Neither did the prime minister, but he twisted it into an attack on the Scottish National Party, who he said had been a “disaster” for pursuing independence and not focusing on important policies like crime and education.

He was criticised by Commons Speaker Sir Lindsay Hoyle for calling them the “Scottish Nationalist Party”, but the technology seemed no barrier to Mr Johnson applying some ad hoc retorts.

“I’m so sorry, they’re national but not nationalists, I see,” the prime minister nodded, again with a slight grin.

But Sir Lindsay signalled he was not letting things get out of order even if the PM wasn’t present for a reprimanding, telling him: “We can play pedantics another time. It’s not a ruling, it’s a matter of fact.”

When the stream cut back to Mr Johnson, he was quick to shine a light on Labour’s position on Scottish independence, challenging Sir Keir to say whether he backed it or not.

“Of course I don’t want the break of the union, but if anything is fuelling that breakup it’s the prime minister,” the Labour leader retorted. He continued to press the prime minister on government COVID contracts found to have gone to firms with political connections and call for people forced into self-isolation to get more financial support.

And while Mr Johnson reeled off the packages already available, he may not have had all cards he would have held if his government reboot had gone ahead more smoothly in the wake of Dominic Cummings and another aide leaving.

And in a marked change from some Downing Street figures’ comments, she poured praise on the media, saying they had played a “good and powerful role during the pandemic so far”.

28 mins ago
We and our partners use cookies on this site to improve our service, perform analytics, personalize advertising, measure advertising performance, and remember website preferences.Ok